Accessibility links
To Get Calcium, Navajos Burn Juniper Branches To Eat The Ash : The Salt Most American Indians are lactose intolerant, which means they need to find nutrients outside of dairy sources. It turns out that a return to traditional cooking methods can be key to good health. 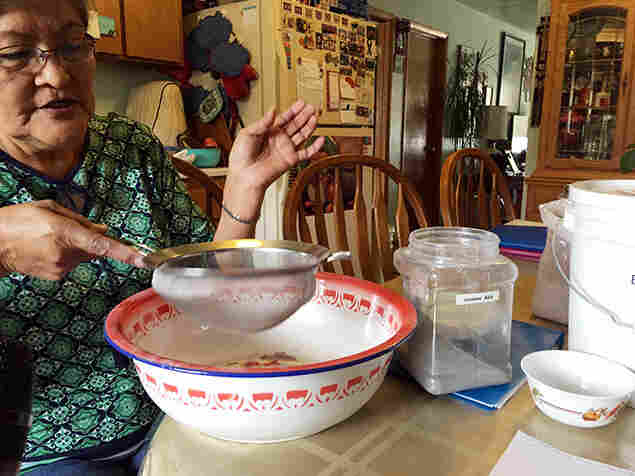 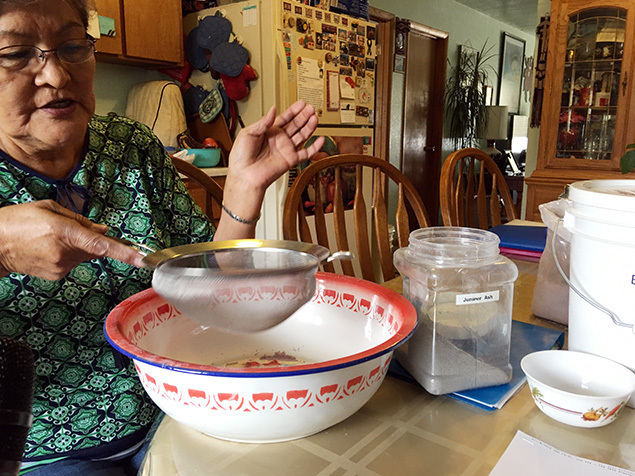 Lillie Pete sifts the juniper ash before adding it to her blue corn mush.

Daniel Begay, who is Navajo, had always been told growing up that traditional American Indian foods were good for him.

But because most American Indians are lactose intolerant, "they aren't getting that same source of calcium from dairy products," Begay says.

Turns out that it's a traditional cooking method that is key to his bone health. The Navajo burn juniper branches, collect the ash and stir it into traditional dishes. The most popular: blue corn mush.

Begay, a graduate student at Northern Arizona University, analyzed the amount of calcium in 27 samples of juniper from all over the reservation. But first he had to ash the juniper outside his apartment in Flagstaff. Not quite the same as the rural reservation.

"I let my landlord know beforehand. I said, 'Hey, I'm going to be building a fire in our yard, just so you know,'" Begay says. "I burned up a picnic table a little bit."

His analytical chemistry professor, Jani Ingram, oversaw much of the work Begay did in the lab. 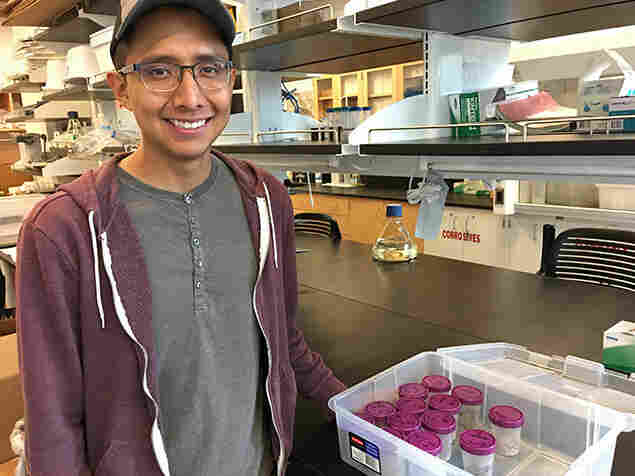 Daniel Begay found that one gram of juniper ash contained about as much calcium as a glass of milk. Laurel Morales/KJZZ hide caption 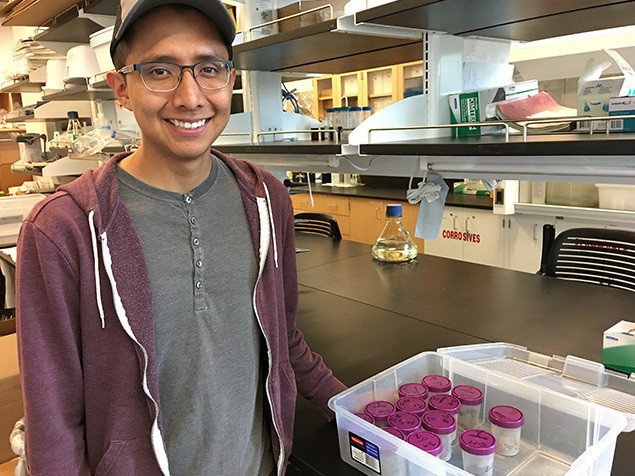 Daniel Begay found that one gram of juniper ash contained about as much calcium as a glass of milk.

"You have to get it to the point where you can dissolve it in acid and then dilute it down and then do the analysis that way," says Ingram.

It was there that Begay found that the calcium level was fairly high.

"For every gram of ash that I was able to sample, I was getting roughly 280-300 milligrams of calcium," Begay says.

He says that's about the same as a glass of milk. But he says the body seems to absorb the calcium from the juniper ash easier.

To see how the Navajo cook with ash, I drive to the tiny Navajo Nation community of Jeddito to Lillie Pete's home. Pete teaches classes on how to cook traditional Navajo food.

She shows me where she picks the juniper from behind her house.

"Some of them will be all brown, you can see it has brown spots on it," Pete says, holding a juniper branch. She says the spots tell her it's time to trim the branches to burn and make the ash.

However, this day is too windy to burn the ash. Fortunately, Pete has a large jar of juniper ash ready to go. We begin making blue corn mush in her kitchen.

Pete says she already knew juniper ash was good for her, along with many other traditional Navajo foods.

"We were warned when the Anglo people came out with the trading posts, 'Stick with your own food,' " Pete says. "Our body wasn't built to consume the kind of food that came with the Anglo. And now we have so many health problems with our people."

Pete says many Navajos tell her they forgot traditional ways when they were forced to go to government-run boarding schools. But now, with the known health benefits, there's an incentive to learn.

Pete boils water and pours it onto the ash. Then she measures the cornmeal and stirs the mixture with several long sticks tied together. She says she always stirs in a clockwise direction to keep her mind calm.

After several minutes, the corn mush produces thick volcanic bubbles, which tells us it's ready. Pete gives thanks to mother earth for the corn as she cleans each stick.

To Appeal To A Modern Palate, Native Chef Gives Tradition A Little Twist

Then we sit down to a hot bowl of delicious blue corn mush. It reminds me a bit of cream of wheat.

As for Begay, he says he wants to get the word out to the Navajo people that juniper ash is a good source of calcium. "Every chance I get when someone asks about my research I say, 'you gotta eat more blue corn mush.'"