Accessibility links
In Michigan, Museum Food Tours Offer Tastes Of Arab Culture : The Salt Yalla! Eat walking tours take people into the Arab-American community, where they can talk with business owners about their personal stories and the products they sell. 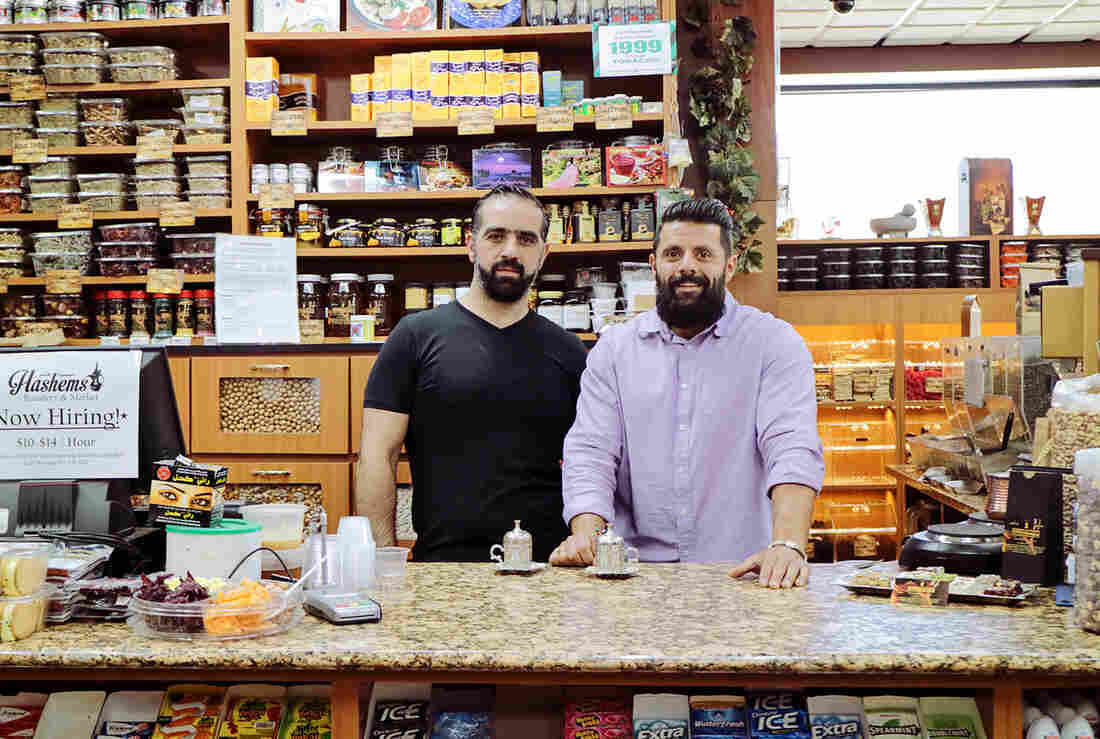 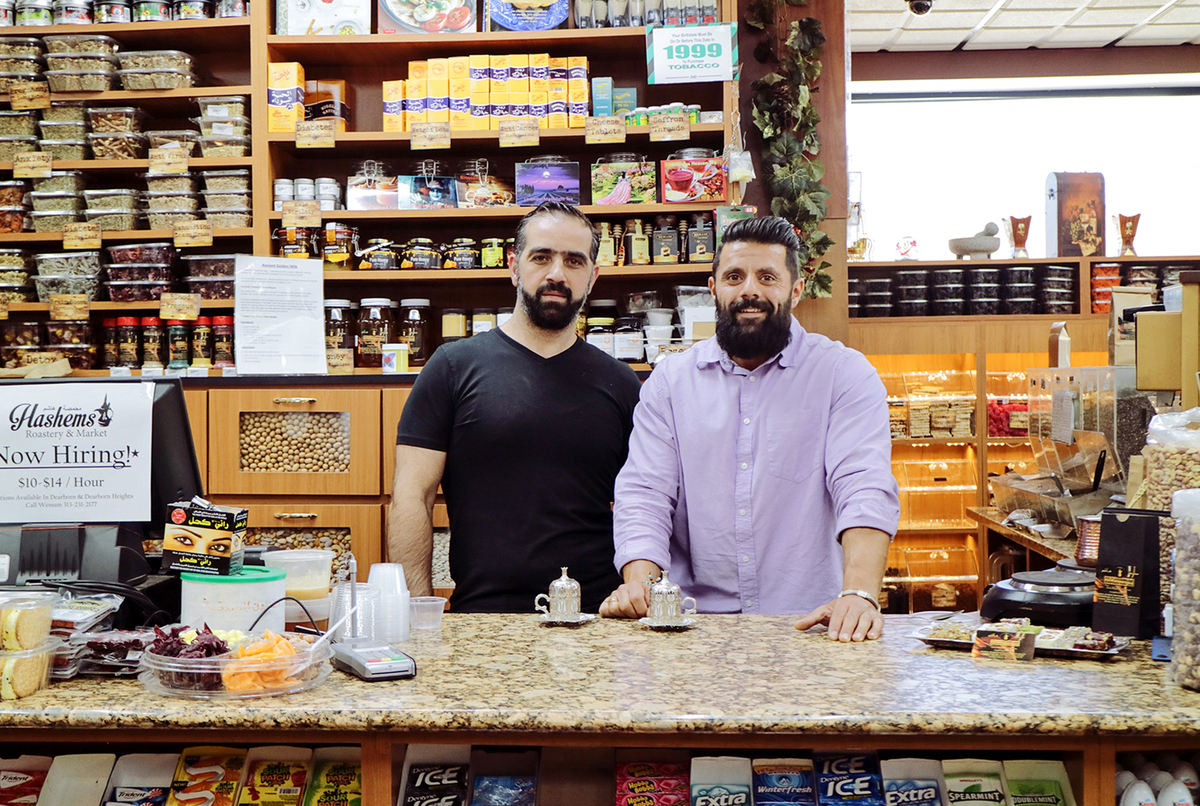 While on holiday in Rome five years ago, Devon Akmon, director of the Arab American National Museum in Dearborn, Mich., took a food tour in a neighborhood known for its culinary traditions. He walked around for hours, tasting samples and hearing the personal stories of shop owners. That experience sparked the idea of establishing walking food tours in metro Detroit, home to the largest concentrated Arab community in the United States.

"Food was always bubbling up in our collective thought process here at the museum," Akmon says. "Through food, we could bring people who are not Arab into the life and the work of the museum."

Unlike most museums, the Yalla Eat! tours take people outside of the building and into the community. People who are unfamiliar with Arab cuisine and culture can talk with business owners about their experiences and the products they sell.

Now in its fourth year, the museum's Yalla Eat! ("Come on, Eat!") food tours have spiked in popularity.

Attorney Miriam Barilovich says she read about Yalla Eat! and decided she wanted "to learn more about the cuisine and about Arab foods [that] I see in markets but don't know what they are." 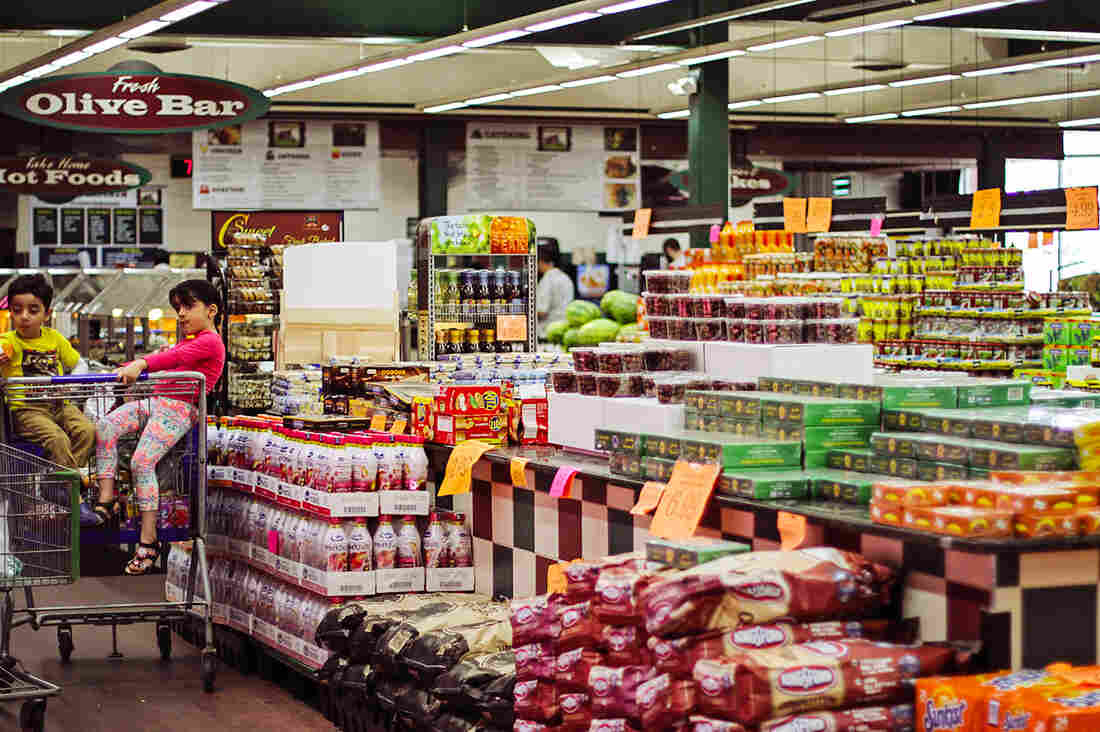 Dearborn is a dense community and Arab businesses line the main avenue. The group starts out at a market called Super Greenland to meet store manager Mona Alaouie. The market is swarming with families, and kids run up and down the aisles as their parents shop. Alaouie takes us to the dairy aisle, pointing out various kinds of imported Arabic cheese like testouri and halloumi, while talking about the history of the market and the story of the family who opened it.

Mattar has been a guide for two years. She's a gifted storyteller who talks about the varieties of falafel and explains halal to those of us unfamiliar with Muslim customs. When she gets to the olive section, things get really interesting.

Olives are a staple of the Arab diet and the 30-foot long olive bar shows just how prevalent they are in the Middle Eastern community. "These little green olives are from the Levant region," Matter says. "They're small and have a big pit. They're harder to eat but they produce some of the most flavorful olive oil." 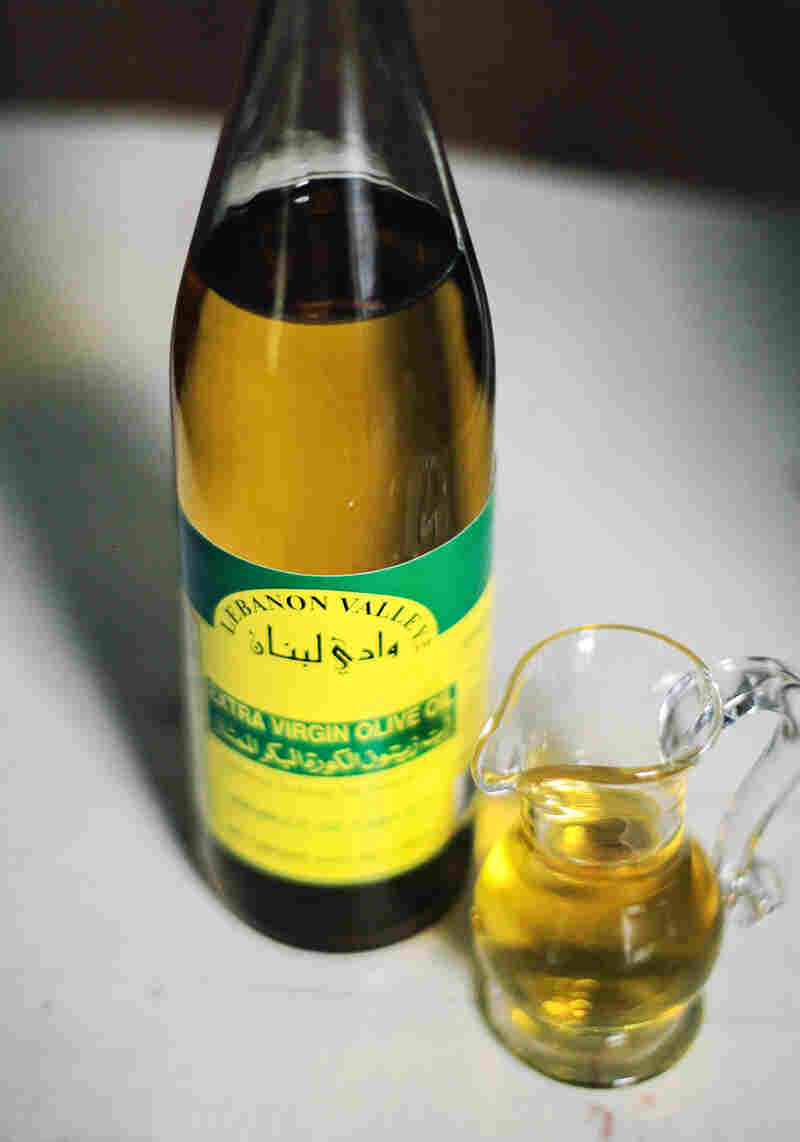 A sampling of one of the many Lebanese olive oils available in Dearborn, Mich., marketplaces. Cybelle Codish hide caption

Middle Eastern countries are territorial over their olive oil production — and every country thinks theirs is the best. The bottles we see in the supermarket aisles are deeply connected to the economies of many Arab countries. Olive oil is also very political.

"Palestine is a quickly dying region and culture," Mattar says. "Their primary livelihood is olives. A lot of people will exclusively buy olive oil from Nablus, Bethlehem or different parts of Palestine. When Palestinian companies produce olive oil, it's a revolt against their occupation." The group hangs on her every word.

Mattar isn't surprised at how little people know about Arab culture. She says people on the tour often tell her that they hear about the community in the news and want to learn more. "There is little discussion of Arab history," Mattar says. "Some people think all Arabs are refugees."

The group walks past a raw juice bar, several Arabic restaurants and a dress shop for formal Middle Eastern events before arriving at a store called Hashem's. Adam Hashem greets us outside with a tray of Turkish Delight, a dessert that is delicately chewy, perfectly sweetened and scented with the exotic flavor of rose water.

He's a lively character, a natural narrator who talks with his hands. He begins by telling the group about how his parents fled the Lebanese civil war and came to Detroit in 1975. They opened a small store dedicated to high-end nuts, chocolates, spices and coffee. Hashem and his brother now run the store that still carries the family name.

Coffee is Hashem's specialty and as he's grinding Arabica and Italian coffee beans with a mix of cardamom, Mattar jumps in. "If you're ever invited to an Arab home, you will more than likely be offered Turkish coffee," she says.

As he pours everyone a tiny cup, someone asks, "Why is this kind called Turkish coffee?"

"Because of the Ottoman Empire," Hashem says. "The Ottoman Empire was a global force that went from as far as Greece and Albania down to North Africa and as far as the Arabian Peninsula. That created this style of coffee that's now consumed around the world." 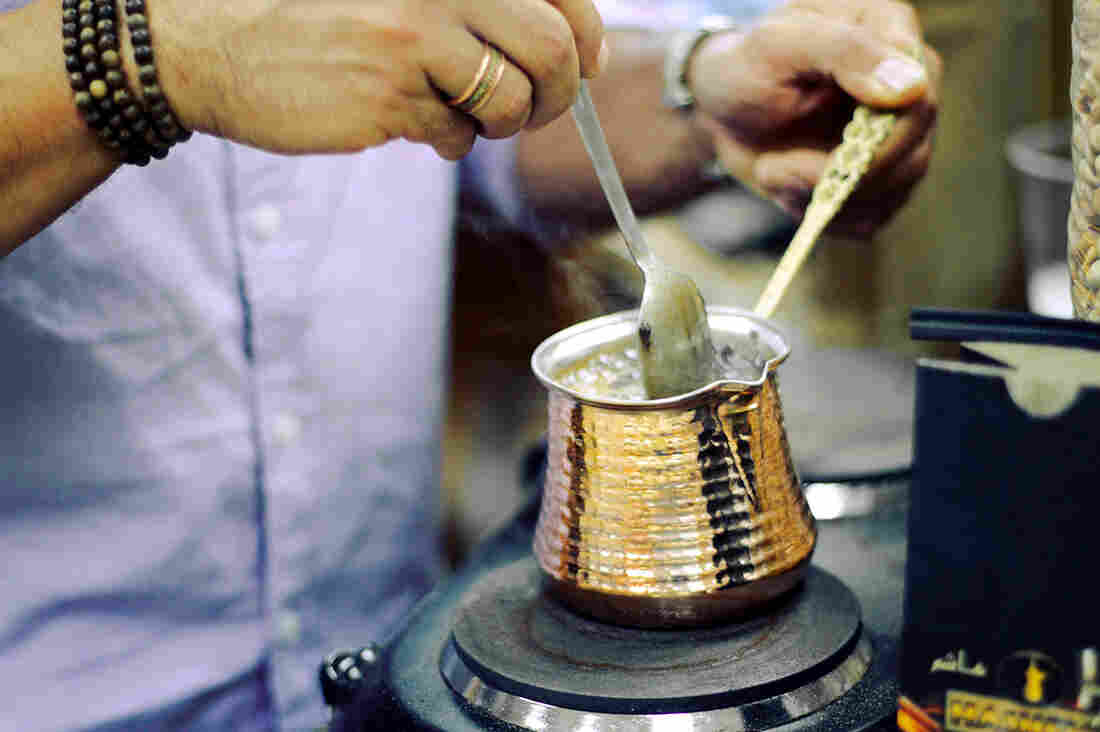 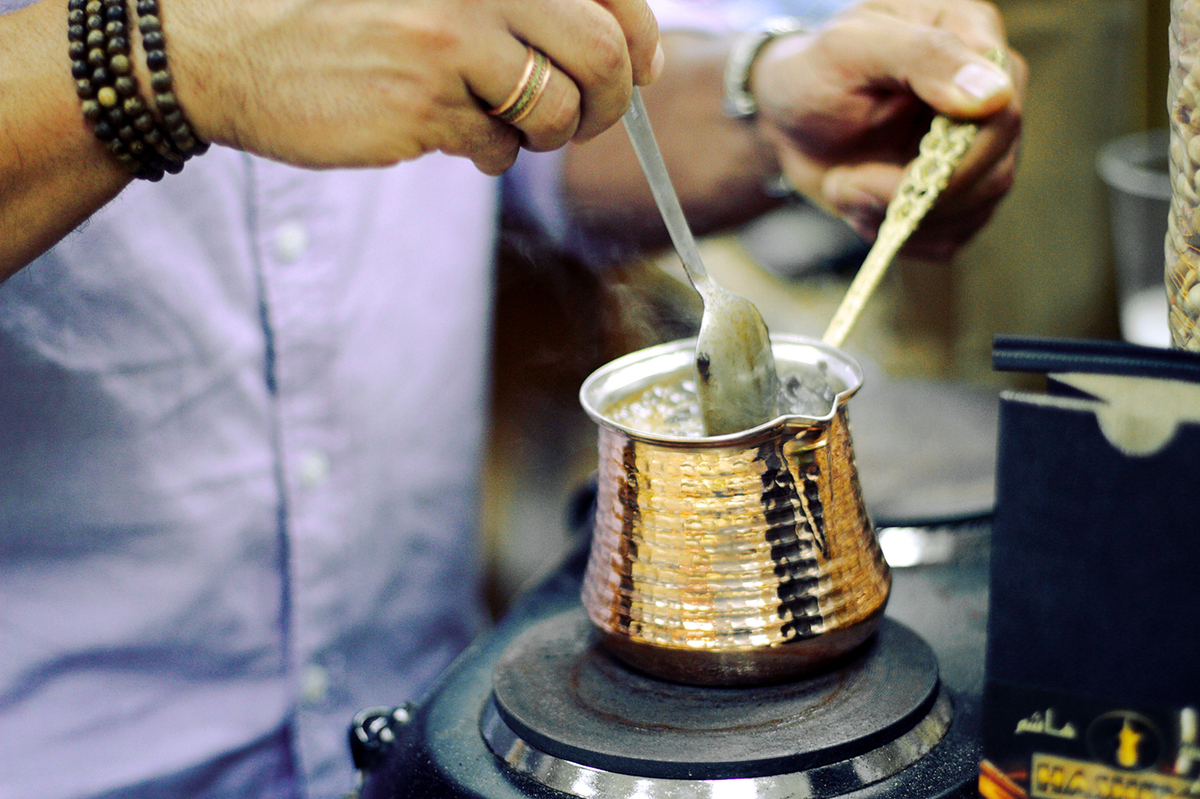 Farah Erzouki, a 24-year-old Arab American, wanted to take the tour to learn more about the history of some hallmark Arab dishes. "This tour gives really great insight into the different regions, based on experts who work in the food industry, people who have studied it," she says. "[It] gives an encompassing perspective on the different cuisines in the Arab world."

At this point in the tour, we have eaten and learned about several kinds of falafel, how to pair fruit with jibneh cheese and the staples of Arab cooking. But like all good food tours, we end up at a tiny bakery where all of the recipes come from a small village in Lebanon. There we eat an original dessert called kanafa bikaak (cheese dome) and melt into a sugar coma.

As we stroll back to our cars, we marvel at all that we've just learned. "I can't wait to go and talk about this with my parents," Erzouki says.

Just before we say our goodbyes, I ask Barilovich if she got much out of the tour.

"I really did. I didn't understand how geographically wide Arabic food is — I learned so much." Barilovich says. "And I just love the pride the people take in olive oil."

The success of the tours has led Akmon and his team to incorporate more food-based programming. Akmon says that when the museum started the tours five years ago, he was concerned that the community wouldn't buy into it.

"These are mom-and-pop shops, and they're just trying to make a living, and here comes this museum bringing people into their business," Akmon says. "But the businesses embraced us. Now we're looking at the different ways we can collaborate with entrepreneurs who are food based, so we can design unique experiences that shed light on our culture."

Martina Guzmán is a journalist based in Detroit. She's currently the race and justice journalism fellow at the Damon J. Keith Center for Civil Rights at Wayne State University.