Accessibility links
'Environmental Nightmare' After Thousands Of Atlantic Salmon Escape Fish Farm : The Salt Officials blame the failure of a pen near Washington's Cypress Island on high tides caused by the eclipse, but that is being questioned. Fishing boats are scrambling to catch as many as possible. 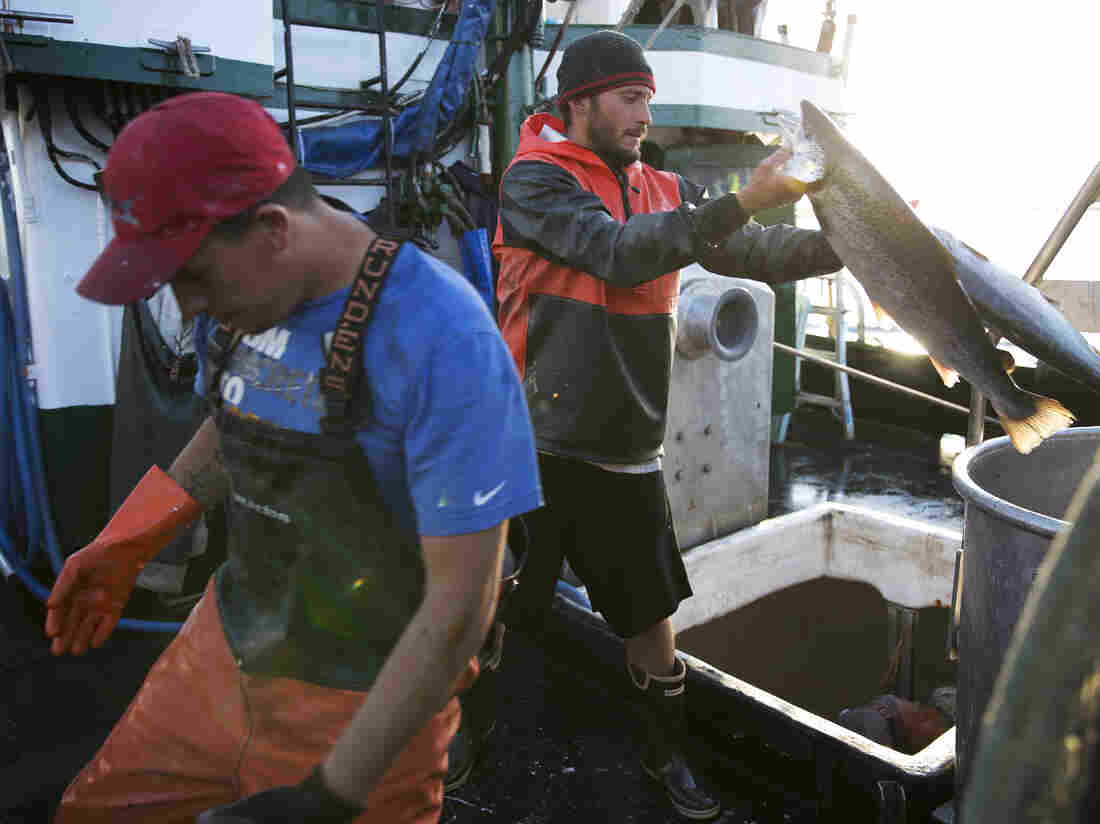 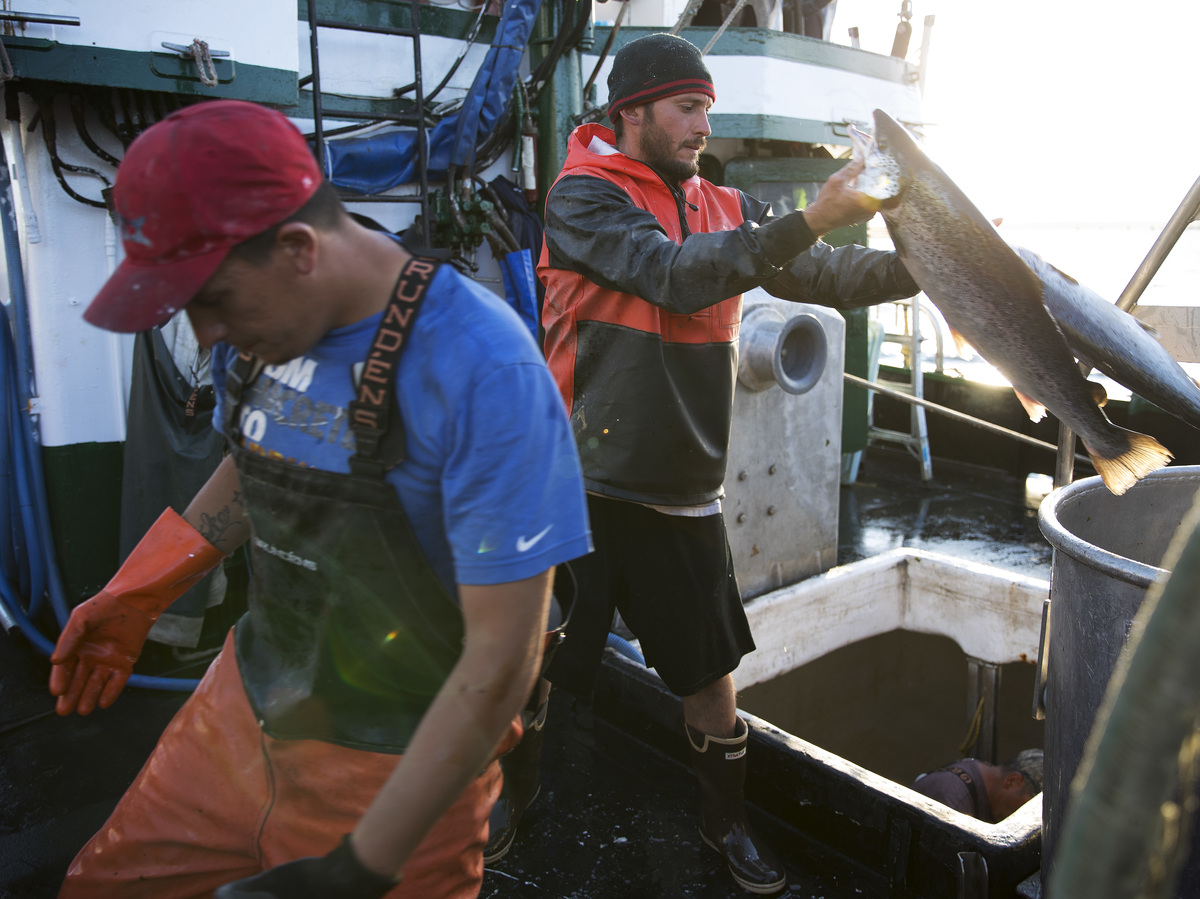 Aboard the fishing vessel Marathon, Nicholas Cooke (left) and Nathan Cultee unload 16 farm-raised Atlantic salmon into a container on Tuesday in Bellingham, Wash.

Commercial fishing boats are scrambling to catch as many Atlantic salmon as they can after a net pen broke near Washington's Cypress Island. Fishers reported thousands of the non-native fish jumping in the water or washing ashore.

The pen, in the state's northwestern San Juan Islands, contained about 305,000 Atlantic salmon. Now, owner Cooke Aquaculture and the Washington Department of Fish and Wildlife are trying to determine how many escaped.

Kurt Beardslee, the director of the Wild Fish Conservancy Northwest, called the escape an "environmental nightmare."

Department officials blamed the structure failure on high tides caused by the eclipse — but that explanation is being questioned because tidal waters had been higher in July.

"Our understanding is with the solar eclipse came some pretty severe tidal exchanges, and within the San Juan Islands themselves, those currents are pretty strong at times," Ron Warren, the department's assistant director, told KUOW's The Record.

A statement on Cooke Aquaculture's website said that "exceptionally high tides and currents coinciding with this week's solar eclipse" caused the damage. 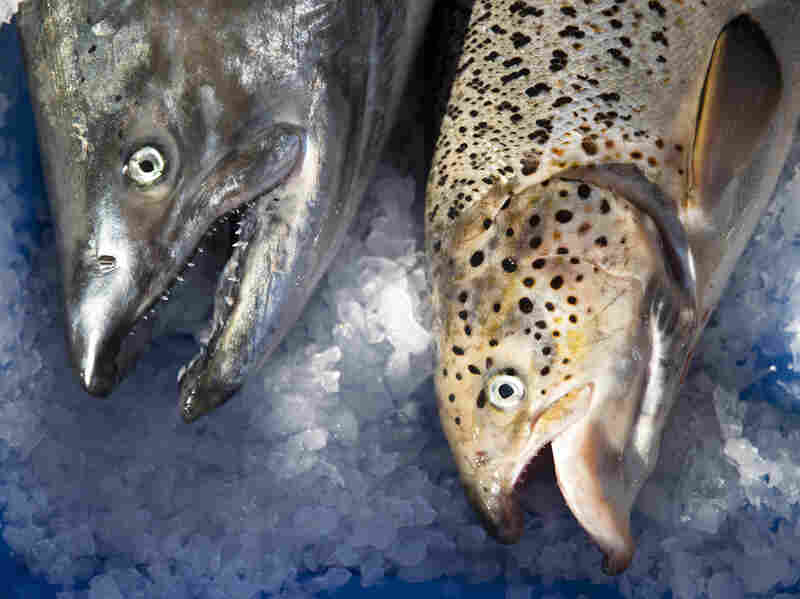 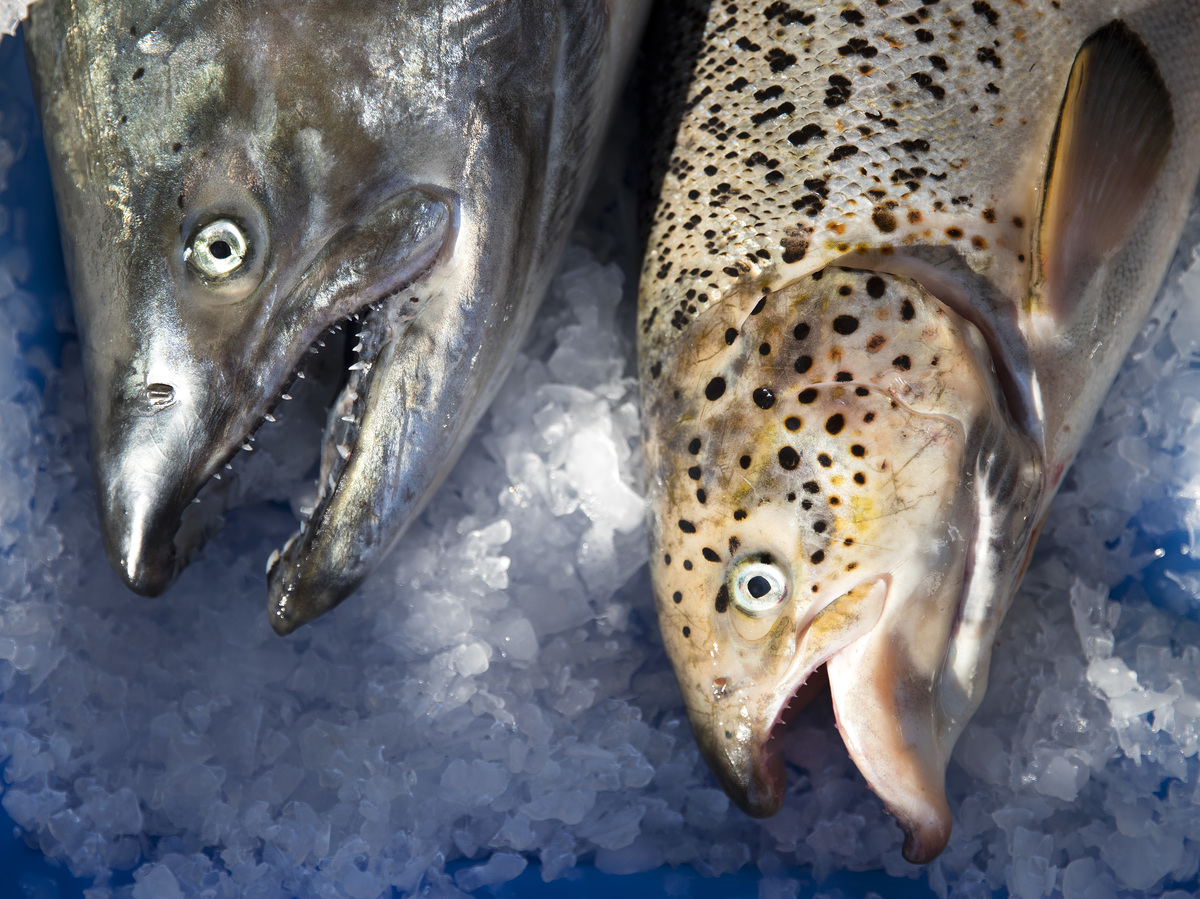 The tides, which fuel tidal currents, were not abnormally high around Cypress Island on Saturday, two days before the solar eclipse and the new moon.

Tide tables show Cypress Island had higher tides every month this year than the 7.9-foot tide predicted to reach the island about 5 p.m. Saturday, an hour after the spill's time reported by The Seattle Times. January's highest tides were more than a foot higher.

Tide tables are forecasts. What if they somehow failed to incorporate the eclipse or local factors, like wind or a low-pressure system, that might help water bulge higher around Cypress Island?

But tidal-gauge data kept by the National Oceanic and Atmospheric Administration for the San Juan Islands show high tide was actually 3 inches below the forecast for Saturday afternoon.

The tidal current off the southeast shore of Cypress Island, where the net pens sit, was about 1 mile per hour at the time of the spill, according to the nautical site DeepZoom. It had reached nearly 4 miles per hour around dawn Saturday, powerful enough to stop a sea kayaker's forward progress.

"I fish up there; that's nothing unusual in that area," Chase Gunnell with Seattle-based Conservation Northwest said.

Every month of 2017 had brought stronger currents to Cypress Island, according to DeepZoom. Winds in nearby Anacortes never exceeded 6 miles per hour on Saturday, according to the National Weather Service.

Warren said his main concern is that Atlantic salmon could out-compete native Chinook salmon and steelhead for food and spawning grounds.

"The Atlantic salmon bring with them pollution, virus and parasite amplification, and all that harms Pacific salmon and our waters of Washington," Beardslee said.

Beardslee said this event should be of concern — especially because the same company, Cooke Aquaculture, is proposing a larger Atlantic salmon net pen in the Strait of San Juan de Fuca.

"The majority of our salmon migrate through the straits when they're leaving as juveniles. You start having a viral or parasitic outbreak there, when our juvenile fish are moving through — it could be a disaster," Beardslee said.

"Can you put those in there?" He asked some commercial fishermen, who brought up a load of Atlantic salmon.

The Lummi Nation, a Native American tribe in Washington state, worries that all this fishing could end up hurting endangered Chinook salmon.

"WDFW has encouraged recreational harvesters to catch as many as they can, but what does that mean to the other species? The Chinook?" said Elden Hillaire, Lummi Nation Natural Resources Commission chairman.

This isn't the first time the tribe has dealt with fish farm escapements. Hillaire said there should be a backup system and better alerts for when farmed fish get loose.

Penalties for the fish farm are still being evaluated. Phone calls to Cooke Aquaculture were not returned.

This story comes to us from Northwest Public Radio, KUOW and EarthFix, an environmental journalism collaboration led by Oregon Public Broadcasting in partnership with five other public media stations in Oregon, Washington and Idaho.