Accessibility links
For Navajos, Desert 'Tea' Fosters Kinship With Heritage And Nature : The Salt Some Navajo are trying to bring back their traditional food culture, including drinking Navajo "tea." It's brewed with a plant called greenthread that thrives in the mid-summer heat of the Southwest. 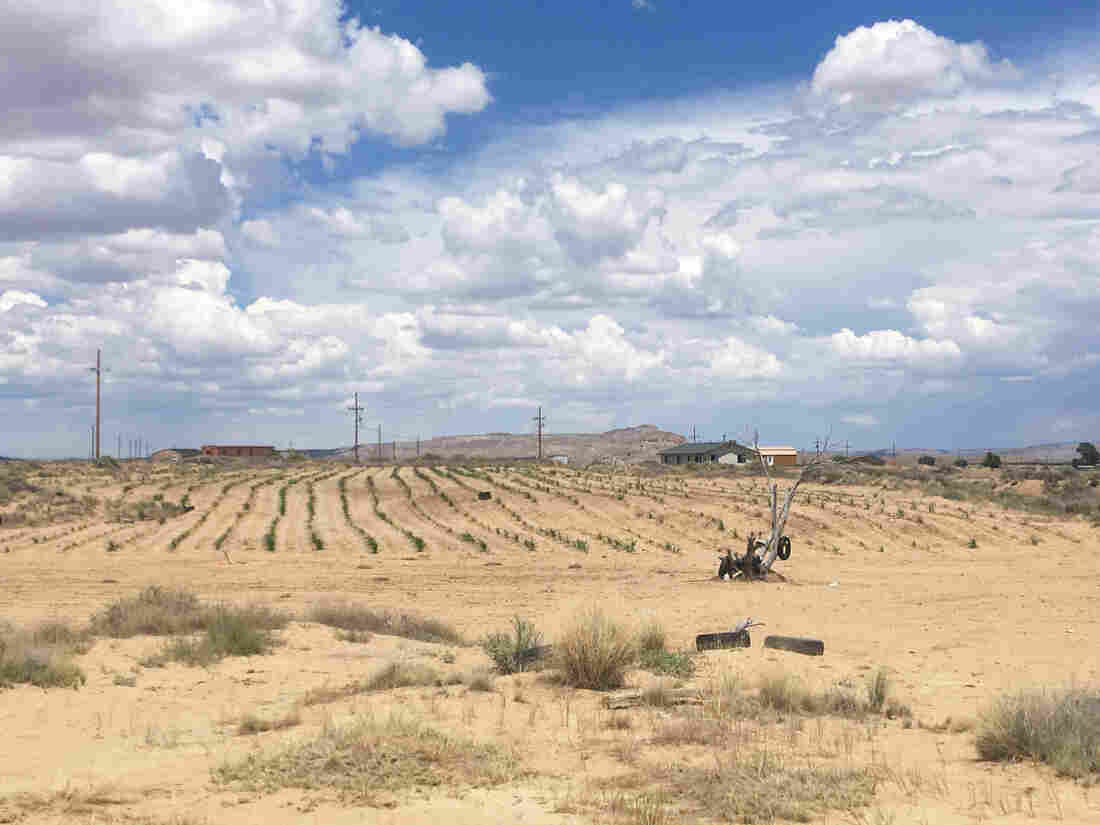 The summer landscape in Arizona looks pretty barren, except for an occasional corn field like this one. But the plants are still small due to scant monsoon rains this year. It will take weeks before the ears are ripe for harvest. Lela Nargi hide caption 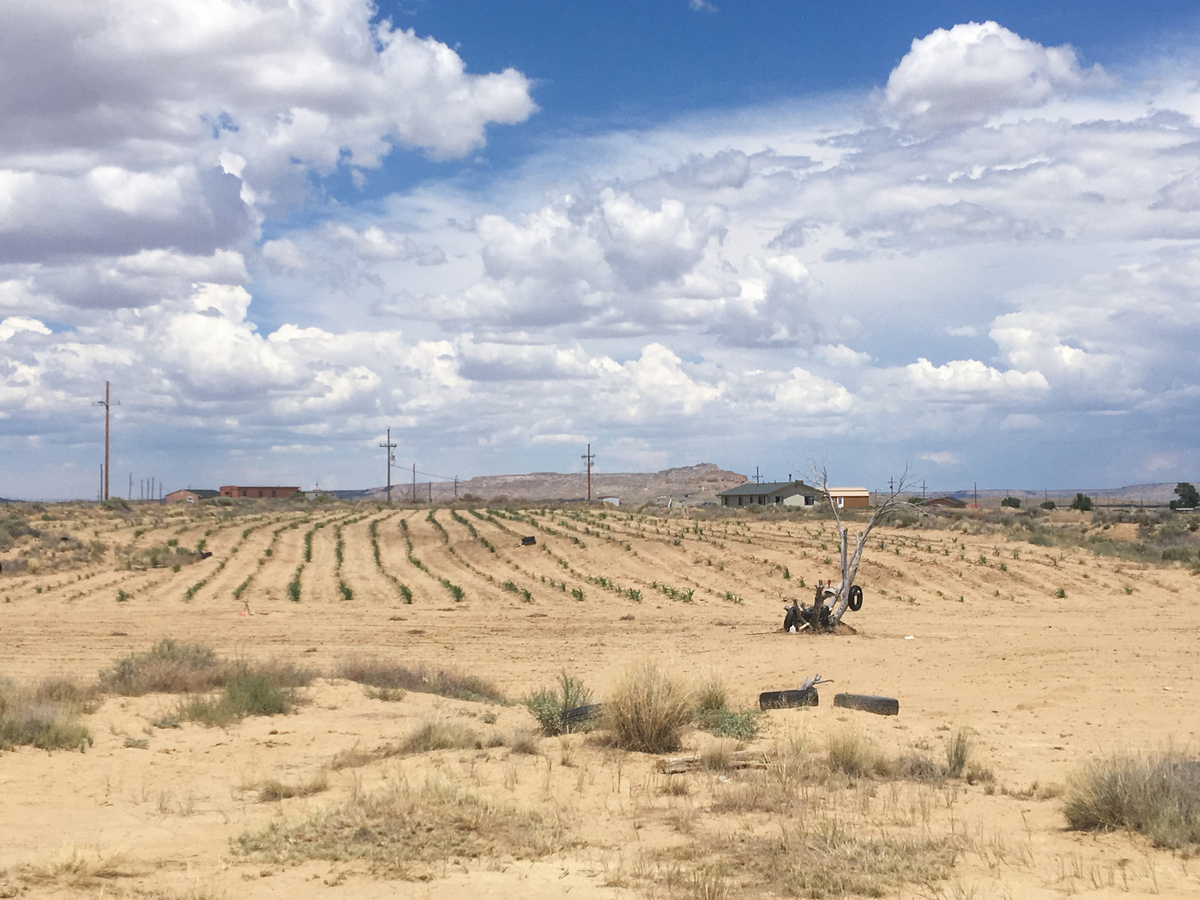 The summer landscape in Arizona looks pretty barren, except for an occasional corn field like this one. But the plants are still small due to scant monsoon rains this year. It will take weeks before the ears are ripe for harvest.

In the dusty red earth of eastern Arizona's portion of the Navajo Nation, the main road stretches out beneath the massive white-cloud sky and rubs against barren, chalky mesas; sometimes it skirts the deep, dry crack of a canyon stubbled with sagebrush. Small fields of corn occasionally sprout up beside the road, the short stalks still far from ripe. 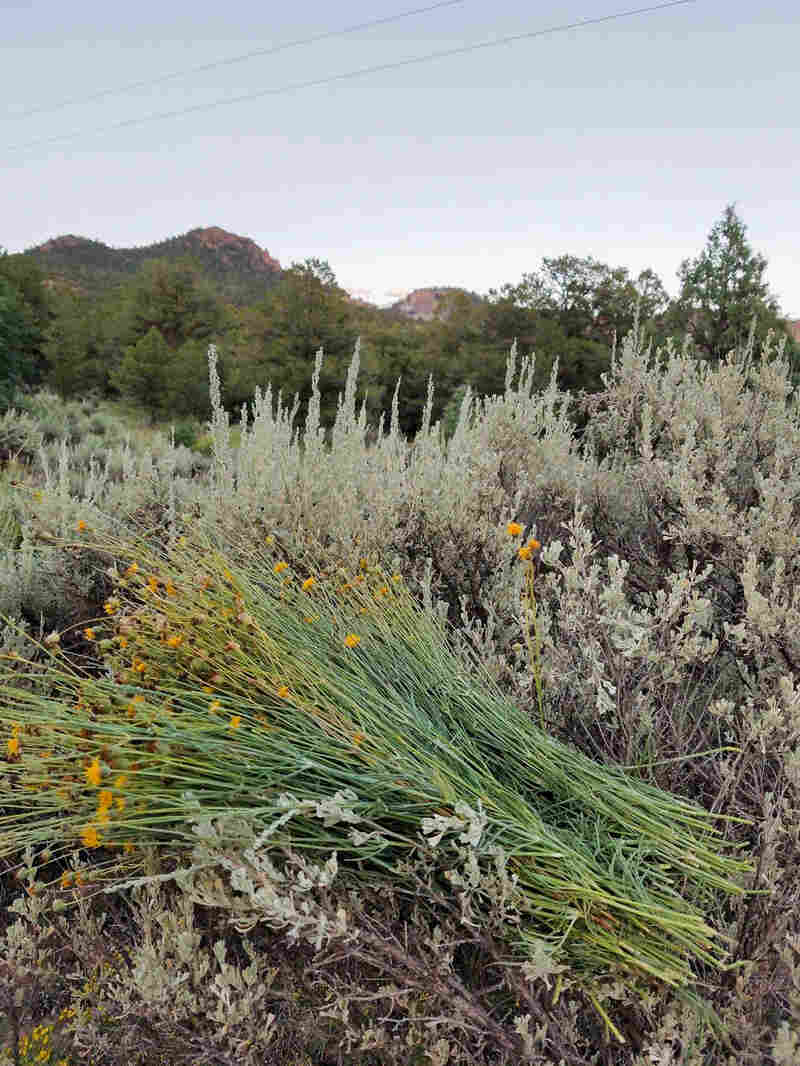 Greenthread (Thelesperma) is a wild plant that thrives in the mid-summer heat of the American Southwest. This bunch is freshly cut, and waiting for rinsing and drying to make Navajo tea. Courtesy of Deborah Tsosie hide caption 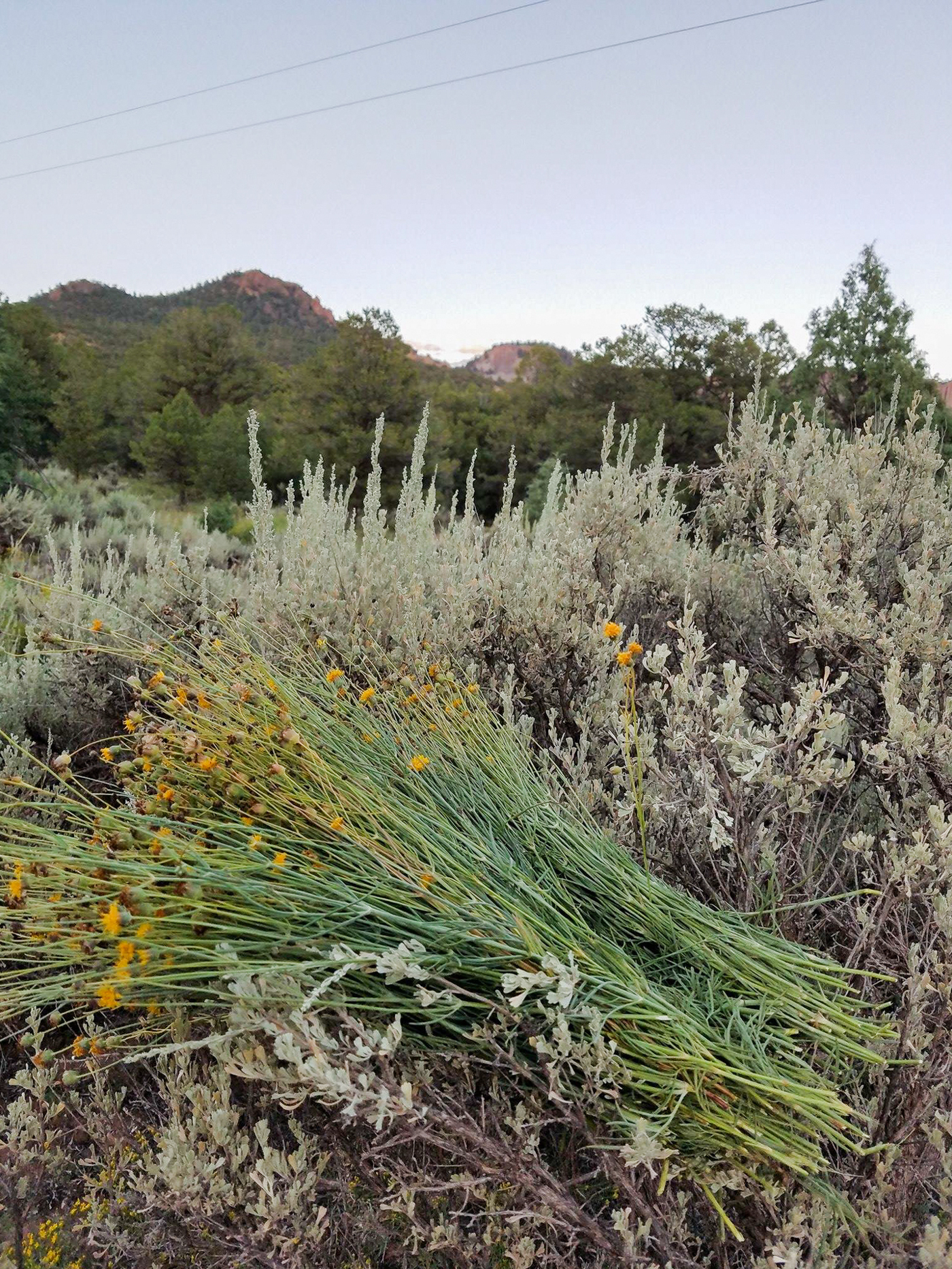 Greenthread (Thelesperma) is a wild plant that thrives in the mid-summer heat of the American Southwest. This bunch is freshly cut, and waiting for rinsing and drying to make Navajo tea.

But away from the road, tucked beside lakebeds or the foot of a hillside, a mid-summer visitor will find bright yellow flowers beginning to open. They are the crowning blooms of a thin plant that can grow up to two feet tall and which thrives in the heat of this arid region. Called greenthread (Thelesperma), it is used to make Navajo "tea."

Unlike the evergreen Camelia sinensis used in caffeinated black and green teas, greenthread is brewed from at least one species of Thelesperma. A member of the Aster family that's native to desert regions of the American West and Southwest, it sprouts up in abundance during the spring; its flowers appear at the end of its stalks in mid- to late summer, signaling that it's ready to be harvested.

Deborah Tsosie grew up on the reservation and teaches third grade at Canyon De Chelly Elementary School in the town of Chinle. She is a regular drinker of Navajo tea. This wild herb resonates deeply with her as a means to connect with distant pieces of her culture, and the great-grandmother who first taught her how to harvest it.

A garland of greenthread. The dried bundles are brewed with sugar or honey. Courtesy of Ada Cowan hide caption 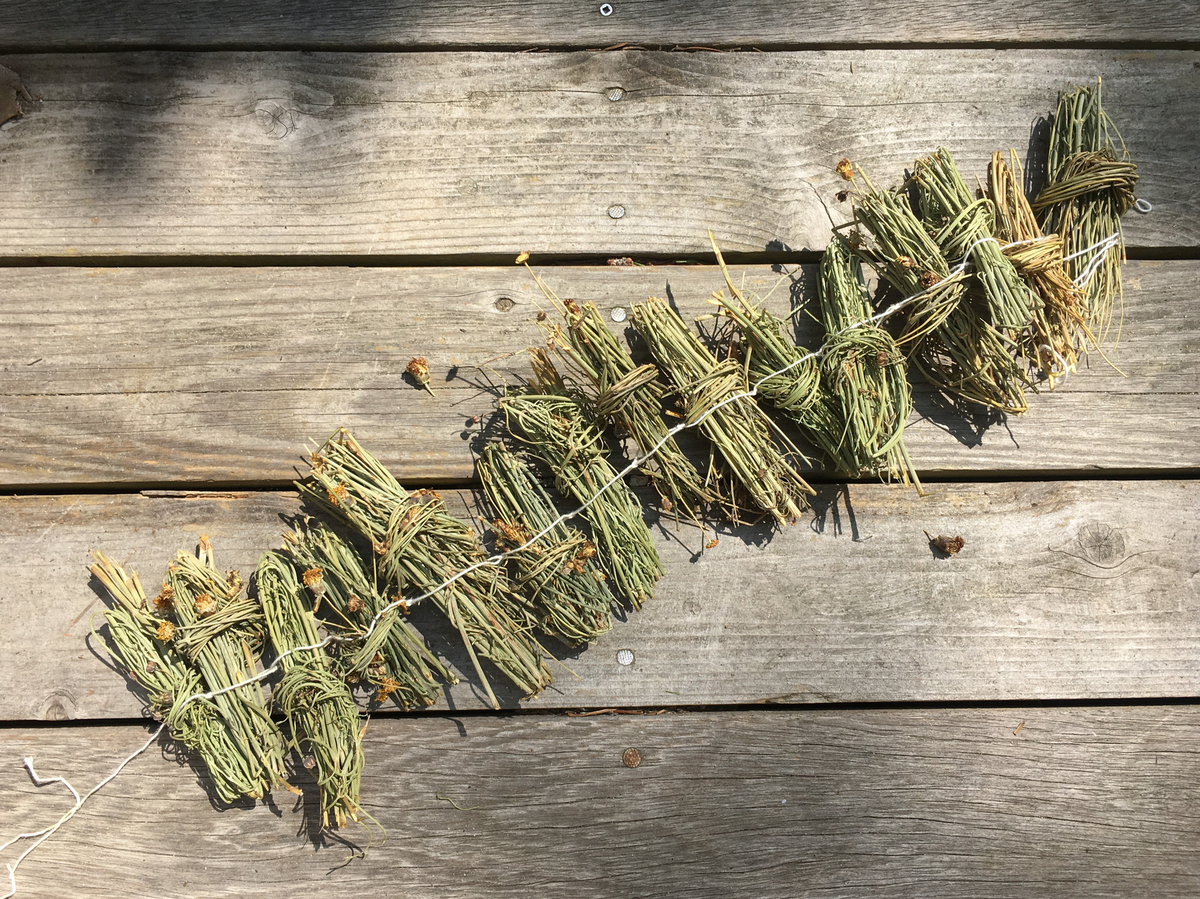 A garland of greenthread. The dried bundles are brewed with sugar or honey.

"Each year, [Great-grandma] would gather the extended family up, and we would spend a few days picking tea," recalls Tsosie. "We would make camp where the tea was, cooking outdoors with oak and cedar fire. These are the times when I learned that you always appreciate what you have. If it wasn't for her, I wouldn't know anything," about traditional Navajo ways.

Navajo talk of a deep sense of kinship with all things in nature, called K'é. Honoring that, Tsosie picks greenthread by snapping it off low-down on its stem, taking care not to pull out its roots. Then, she shakes the plant to release its seeds back into the soil.

"That way, it will be replenished," she says. After rinsing and a day or two of drying, the plants are folded into tidy bundles and strung into garlands. "Tea" is made by snipping off a bundle and boiling it in water for several minutes with sugar or honey. At this point, it takes on a ruddy hue and the earthy, mild flavor of fresh grass. 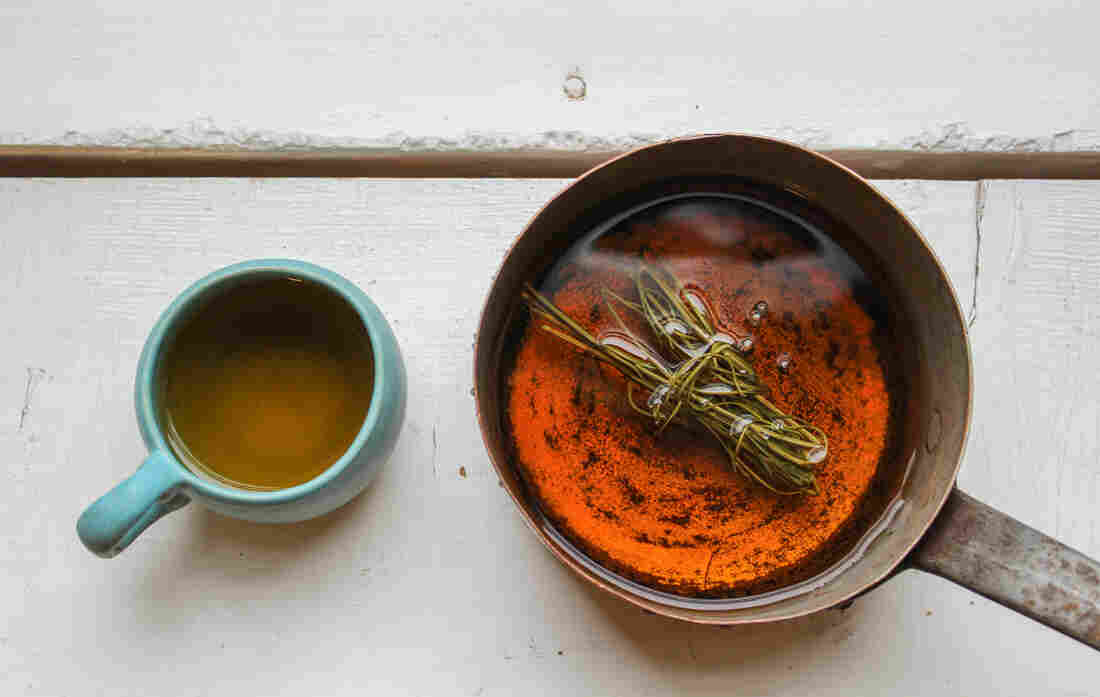 A freshly brewed cup of Navajo tea. This beverage is caffeine-free and tastes earthy and grassy. Ada Cowan hide caption 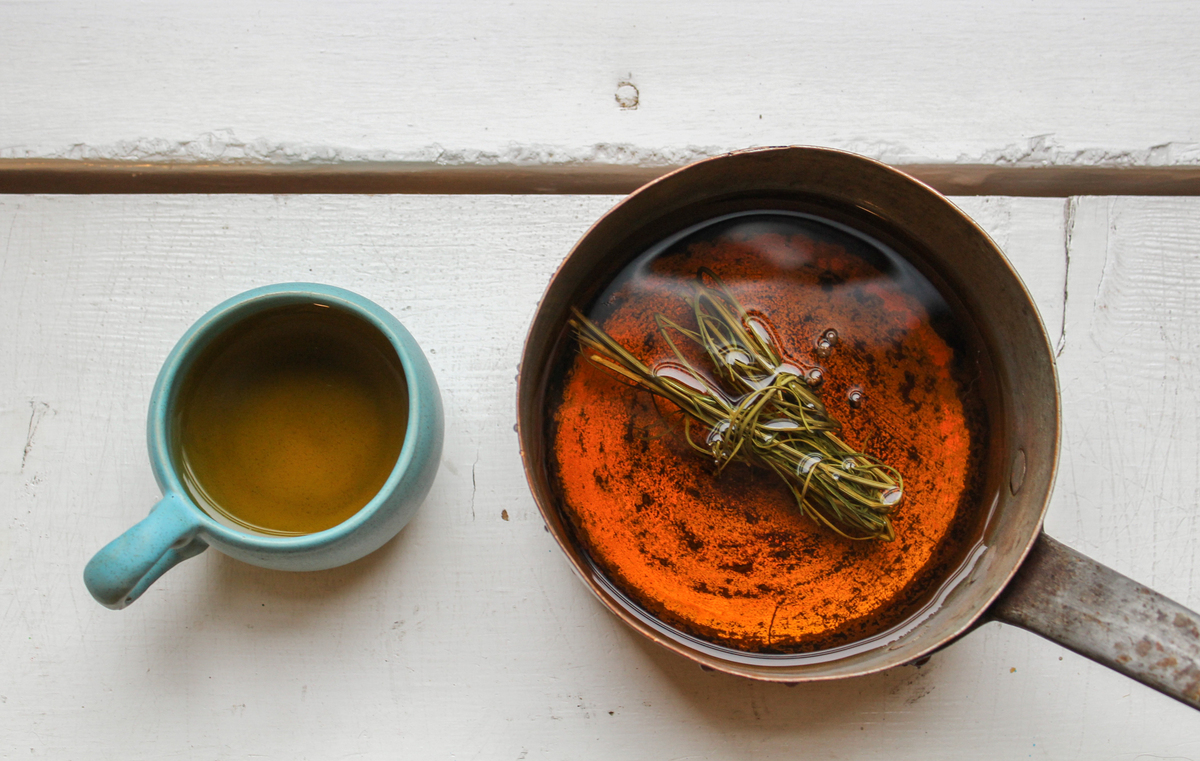 A freshly brewed cup of Navajo tea. This beverage is caffeine-free and tastes earthy and grassy.

Although Navajo tea is now available commercially in bags, Tsosie only uses this if she's at work, where steeping a cup is simpler and less time-consuming that brewing a bundle from scratch. But, "it doesn't seem 'real,' somehow," she says. "When you pick tea, it leaves a little stain on your hand, and you can smell it growing. When I boil a pot of it, it brings me back out into the open." These are experiences a bag of powdered greenthread cannot conjure.

Tsosie says her daily diet is mostly what she considers typically American; she and her husband cook chicken, steak, rice and potatoes. But they also make a point to eat more traditional foods. They feel that native foods are important, and worthy of being reclaimed — a sentiment that's widely shared on the reservation. A 2014 survey by the Diné Policy Institute at Diné College in Tsaile found that 82 percent of Navajo wish they knew more about how to eat like their ancestors.

In addition to corn, these ancestors once grew two other edible staples: beans and squash. They supplemented them with abundant orchard fruits — before Colonel Kit Carson burned the trees to the ground in 1864 and sent the Navajo on their Long Walk to imprisonment at Fort Sumner — as well as foraged plants like Rocky Mountain beeplant (aka Navajo spinach), prickly pear cactus, and piñon. But knowledge about traditional foods has dwindled; some Navajo, like Tsosie, are doing what they can to bring it back.

Tapping into information she learned as a child, or has sought out more in recent years, Tsosie often cooks traditional blue corn mush and mutton; she brews Navajo tea almost every day.

When she drinks greenthread, Tsosie says she feels healthy. And she is healthy compared to many of her neighbors on the reservation. The 2014 study found that an estimated 33 percent of Navajo were living with Type 2 diabetes or were pre-diabetic.

"We consume soda at a high rate here," says Tsosie, a statement the study confirms. And soda has been shown to increase the risk of Type 2 diabetes. Tsosie's tea-drinking is her way to stay away from sugary beverages, as well as to connect with her heritage."

Recently, she introduced Navajo tea to her students, bringing in to her classroom a whole plant as well as a tea bundle, and boiling up a pot of it on a hotplate for them to taste. "Only two out of 18 of them already knew what it was," she says without much surprise. "I think those two were probably raised with their grandmothers."

She's also been taking her own grandchildren out to pick greenthread when they come to visit. Not only as an alternative to soda, but because "it's a step toward reclaiming our traditional foods. What's important about it," she says, "is that it's ours."

Lela Nargi is a Brooklyn-based journalist and author. Her food writing has appeared in publications including Gastronomica, Civil Eats and Roads & Kingdoms.