Accessibility links
Salmon Fisher: Spill Is Dangerous And 'We Shouldn't Have To Deal With It' : The Salt Commercial fishermen are putting off their own livelihoods to catch the farmed Atlantic salmon that broke out of their net pen in Washington state. One fisherman describes the "carnival atmosphere." 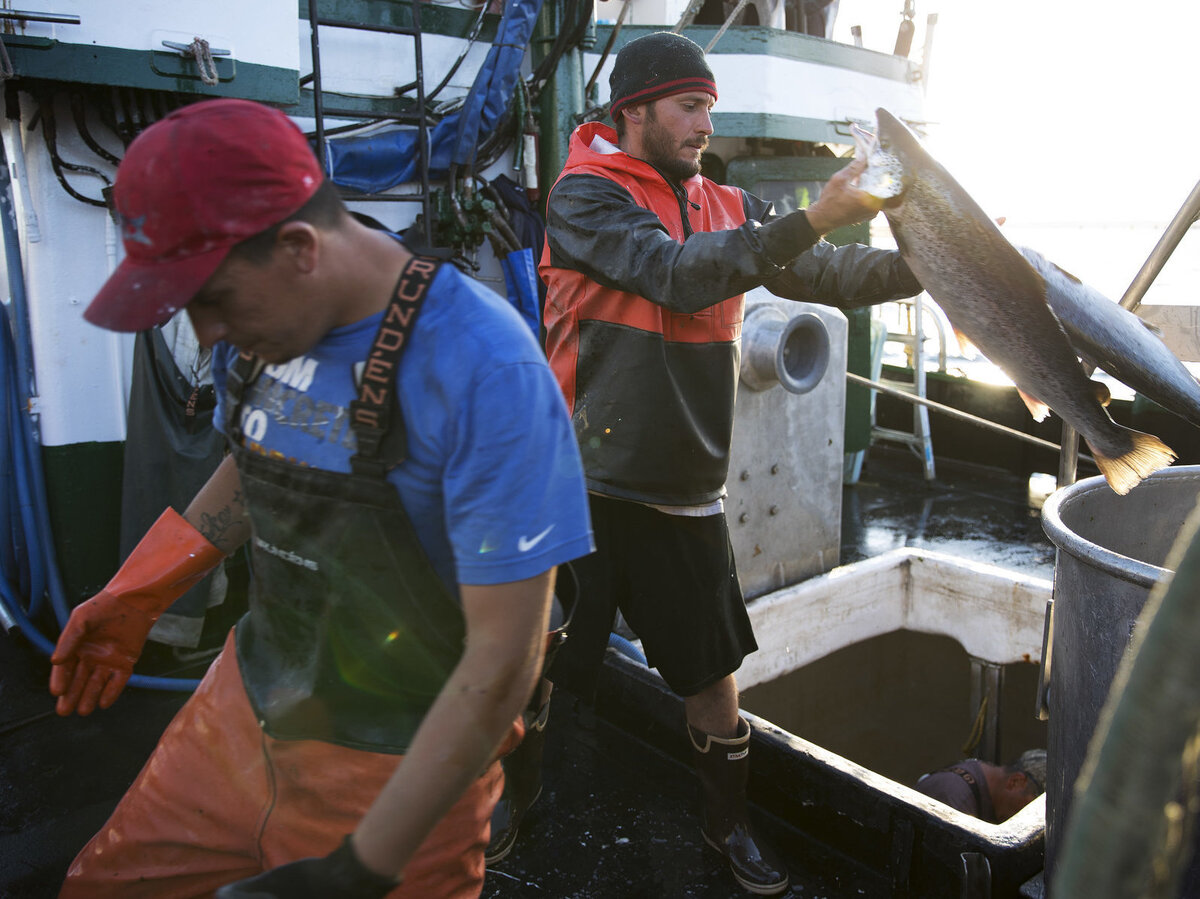 The state of Washington is calling all fishermen to catch unlimited farmed Atlantic salmon with no size or weight limits after a net pen broke last week, allowing thousands of the non-native fish to escape into the open ocean.

The pen, in the state's northwestern San Juan Islands, contained about 305,000 Atlantic salmon, and is owned by Cooke Aquaculture.

The Washington State Department of Natural Resources says it is working with other state agencies, local Indian tribes and Cooke Aquaculture to discover an accurate timeline of events as well as the scale of the release, but estimates that 4,000 to all 305,000 fish have escaped.

NPR's Ari Shapiro talks with Riley Starks, a wild salmon fisherman in Washington state, about the invasive Atlantic salmon spill. This interview has been edited for length and clarity.

How do you go about collecting 300,000 fish that are just swimming in the ocean?

The Atlantics don't act like other fish. They're used to swimming in a pen around in circles and used to getting feed from above. So they tend to want to stay near shore, and the fishers figured out that you just trap them near shore.

When you pull in these farmed Atlantic salmon, can you tell whether you've caught one of those or one of the native wild Pacific salmon?

Yeah, it's pretty obvious. They're a different animal. They have large spots, they have a long body, kind of a hammerhead, their tails are streamlined, they're scarred by rubbing up against the net pen. They're not strong swimmers at all.

What's the harm if they do get out in to the wild population?

Well, right now the timing is particularly bad because all the native wilds are going up to spawn, so these farmed salmon are just following them up there. And they've been fed antibiotics, they have diseases. They were being treated for yellow mouth disease when they spilled, and the first ones we caught definitely had yellow mouth. Pharmaceutical pollution and diseases is the worst of it. But also competition for food up the river and competition for spawning, like when a wild Chinook goes up and lays their eggs, an Atlantic could come right behind it and eat the eggs or sweep them away. So it's a dangerous situation and we shouldn't have to deal with it. We think these fish should not be in the environment. We don't think they're safe for consumption.

But these are fish that are being raised for consumption. These are the kinds of fish that wind up in grocery stores, right?

Well, they do, but they have to go through regimens of antibiotics and then get all of that out of their system before they can be sold. We don't know where they were in their regimen of antibiotics.

What are you doing with the fish when you catch them?

We're bringing them in to Home Port Seafood in Bellingham to be frozen and preserved, but not put onto any market. They have to be disposed of properly.

Are commercial fisherman putting of their own livelihood — the time they would be spending fishing for salmon that they could sell at the market — to clean this up?

Yeah, that's the company's response plan. It's like an oil tanker rupturing, spilling oil everywhere and the company calling out citizens to bring their boats so they can take the oil home! It's just irresponsible, and it's shortsighted, and it shouldn't be allowed.

What does it look like on the scene where these fishermen are trying to retrieve the salmon that have escaped?

It's sort of a carnival atmosphere. There are small boats — mostly small boats. But you know, fishermen love to fish. And so there is a certain sort of joy in it, but it's like a Fellini movie, there's the overshadowing despair that underlies it.

How important is the wild native Pacific salmon population to this part of the country?

Wild salmon is the icon of the Pacific Northwest. Without wild salmon, our ecosystem would be an entirely different thing. Everything depends on wild salmon, from the beginning when they spawn and run out the river to when they come back home to die.

How much longer do you think you're going to spend out scooping up these farmed salmon before you get back to your real work?

Well, it's diminishing every day. The fish are moving, so the guys that are catching are having to move to different bays to get them. We think there's been about a third of the fish caught so far that were spilled, and there's a big effort out now. So I'm hoping within a week we'll have it done.