For Grocery Stores In Texas, It's A Race To Restock Their Shelves

For Grocery Stores In Texas, It's A Race To Restock Their Shelves 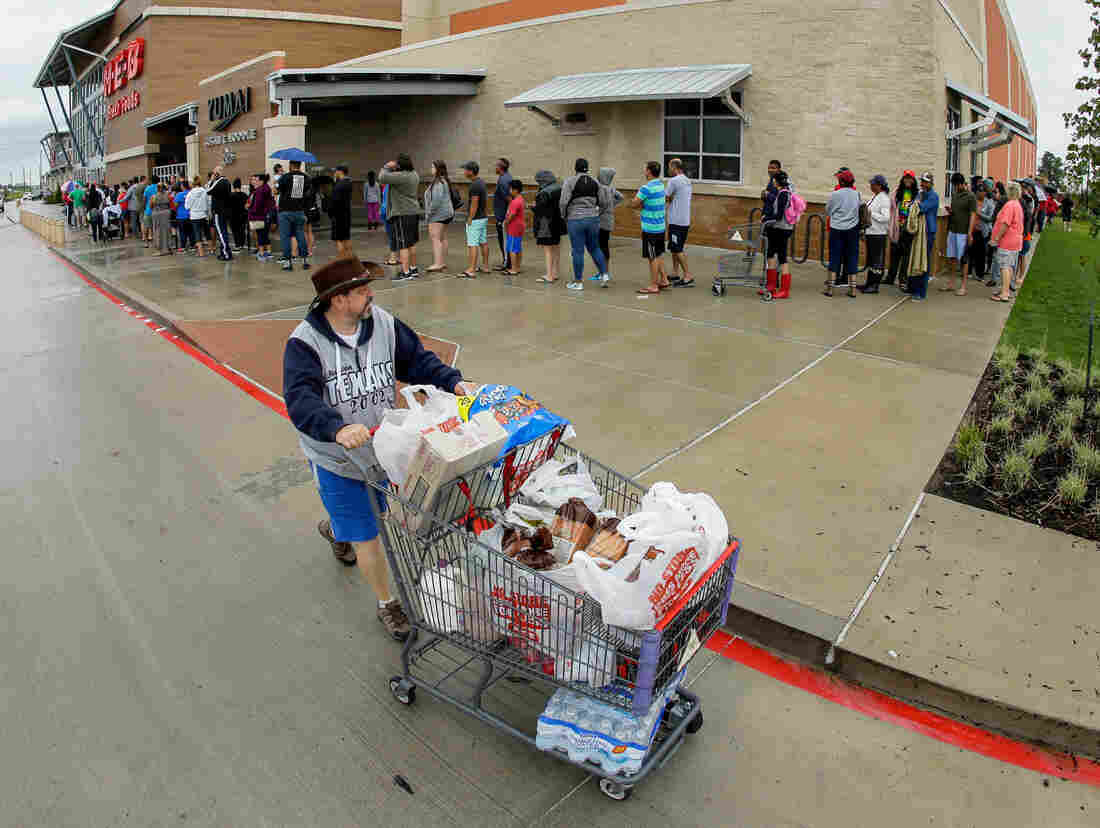 People in Richmond, Texas, line up to gain entrance to a grocery store after it opened for the first time in several days due to Tropical Storm Harvey. Charlie Riedel/AP hide caption 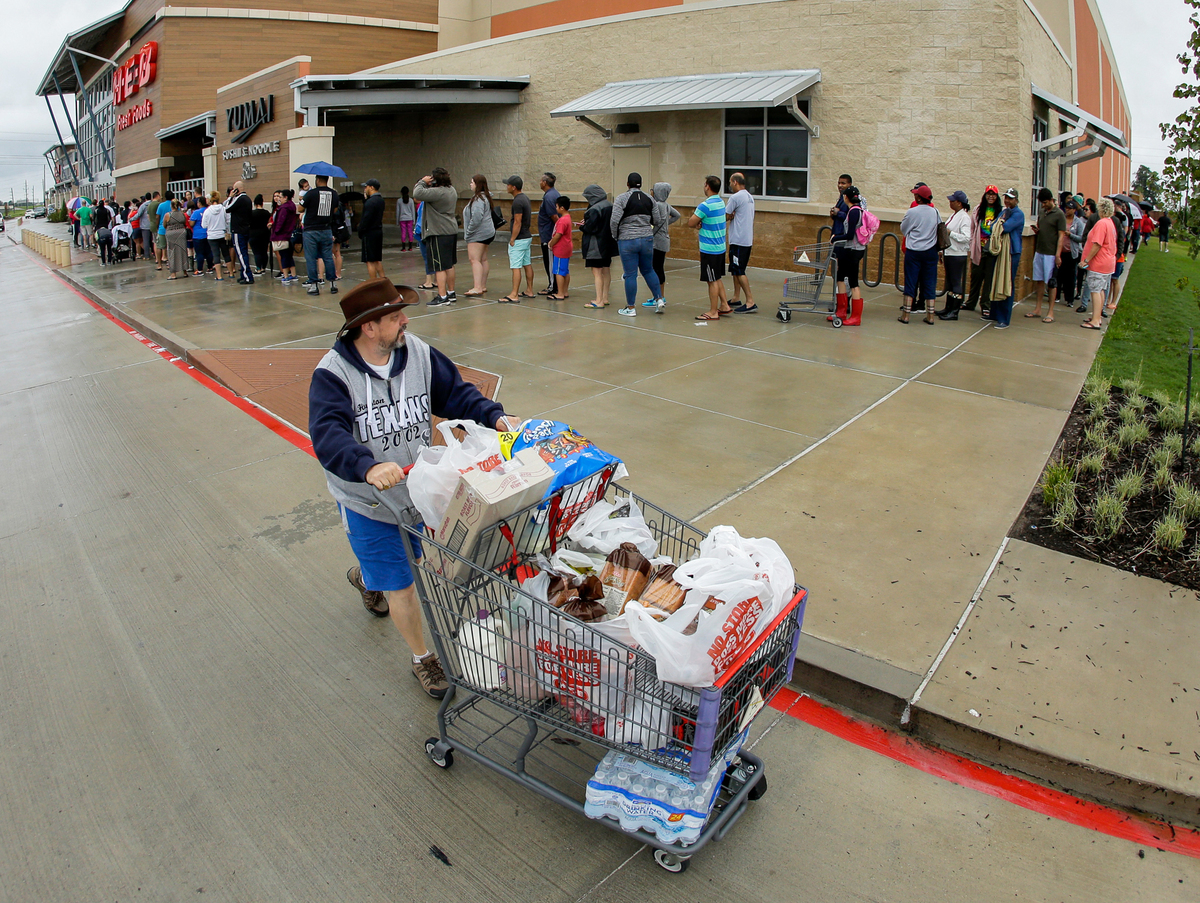 People in Richmond, Texas, line up to gain entrance to a grocery store after it opened for the first time in several days due to Tropical Storm Harvey.

Earlier this week, as torrents of rain fell on Houston, Craig Boyan, CEO of the H-E-B supermarket chain, went on a video-taped tour of his company's emergency operations center in San Antonio, Texas. The company later made the video available online.

It was a revealing look inside a logistical nightmare. Boyan walked through two crowded, windowless rooms, stopping to speak with the people responsible for reopening stores, locating employees (or, as the company calls them, "partners") to staff those stores, organizing deliveries of water and ice, and figuring out how to line up fresh supplies of milk, eggs and bread despite the city's waterlogged streets.

Riding With A Rescue Mission In The Surreal, Perilous Texas Floods

One example: H-E-B makes most of its own bread, and its two bread-making plants are located in Corpus Christi and Houston. When the storm hit, "we had to take Corpus down, run the whole company out of Houston," Boyan explained in the video. When the storm moved on toward Houston, "we had to switch back to Corpus, now we're on generator power" at that plant. But the company's supply of fresh bread was never interrupted.

There was a lot more than H-E-B's own business at stake. Every day without deliveries of food and water could mean hunger for many thousands of people. "One of the things we're really proud of is being the last to close and the first to open," Boyan said.

Indeed, H-E-B and other big supermarket chains managed to get stores open and trucks rolling from warehouses at an impressive pace this week.

On Tuesday, at the height of the flooding, Walmart had closed 134 Houston-area stores. By Thursday, only 21 stores remained closed. H-E-B also had reopened almost 90 percent of its stores by then. Of the 20 stores owned by Albertson's, 16 are now open.

According to Ragan Dickens, a Walmart spokesman, "very few" of the company's stores actually flooded. The company had to throw out some perishable food, but it was able to reopen any stores that were accessible to trucks and had electrical power.

Dickens says that customers at some locations have been forced to line up outside to prevent overcrowding inside. And some stores remain closed because workers and trucks can't get to them through flooded roads.

The ability of Houston's big grocery chains to rebuild their supply chains "is amazing, but not surprising," says Roni Neff, a professor of Environmental Health and Engineering at Johns Hopkins University. Neff recently co-authored a report on ways that the city of Baltimore could ensure continued food supplies in the face of future disasters, including possible flooding.

"We did a whole set of interviews, and we found that the bigger chains and the bigger businesses had very extensive planning in place" for natural disasters, Neff says.

City governments, on the other hand, don't always think enough about food supply in their emergency planning, she says. In Baltimore, for instance, "there was an emergency operations center, but nobody [overseeing] food was there."

Baltimore has now changed that. The city now has a "food resilience coordinator" who is part of emergency planning. "This is something that very few places have done in the past," Neff says. "I really believe it's something that everybody should be looking at."

According to Neff, governments do need to be involved, in addition to supermarkets. "In Houston, as everywhere, the impacts are not equally felt," she says. "People with lower incomes, people who are elderly, with disabilities, with medically necessary diets, may be particularly hit by this kind of situation, and really have quite severe food security threats to them." And city governments need to be prepared to get food to these, more vulnerable groups.

In Houston, many supermarket chains, including Walmart, H-E-B, and Albertson's, have also helped in relief measures. They have delivered truckloads of water and food to large shelters and to food banks, which in turn send food to distribution points in other parts of Houston and nearby areas.

Trucks were only able to reach the central Houston Food Bank starting Wednesday evening. "Now, the wheels are spinning, literally and figuratively," says Paula Murphy, who handles public communication for the organization.

Tell Us Your Harvey Story

Seventeen truckloads of non-perishable food and water from Walmart were scheduled to arrive on Thursday, along with three airplane loads of food flown in from Dallas. "As soon as it arrives, it goes out again," she says. "Our fleet of trucks is out there. The area we can reach is expanding."

The biggest need, she says, is probably in rural areas outside Houston, far from any supermarkets, where roads still may be impassable.

A previous version of this story talked about the need in rural areas outside Dallas. It should have said Houston.