Accessibility links
The Divisive Diet of Honeybees: Why Some Will Never Be Royals : The Salt That stings! A new study suggests that fragments of plant genetic material in the pollen-rich diets of worker bee larvae ensures that they never grow up to be queens. 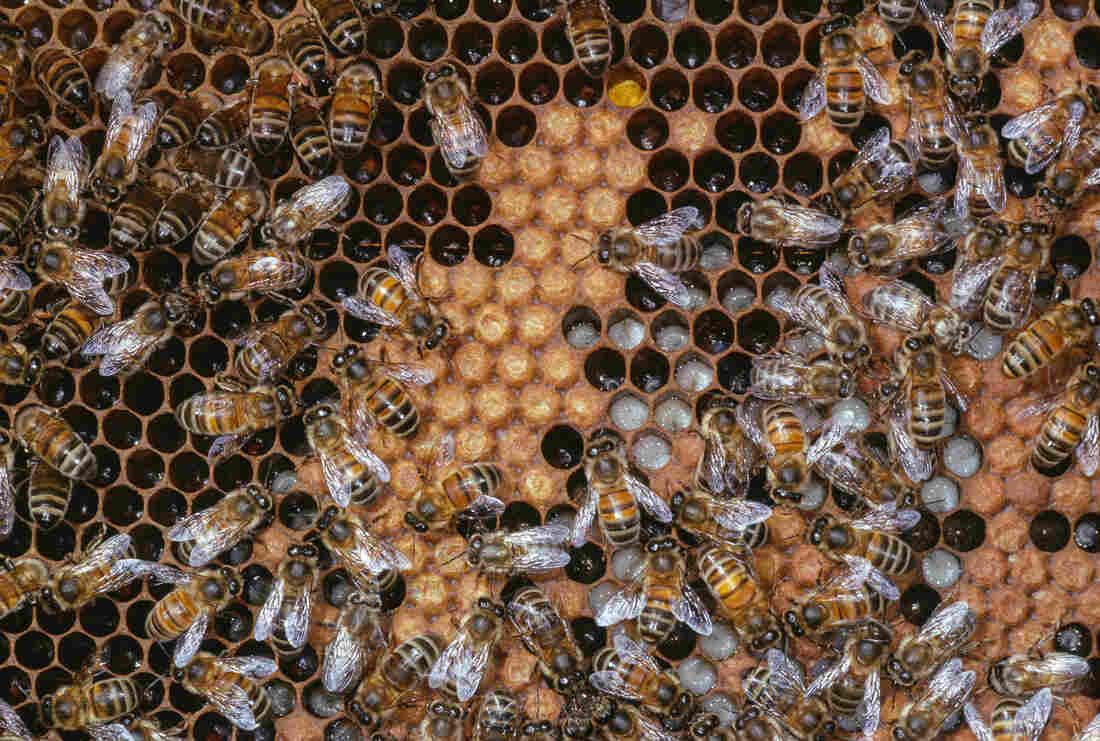 Honeybee (Apis mellifera) workers tending larvae on brood comb. The larvae that will grow up to be workers have a plant-based diet of a mix of honey and pollen. Stephen Dalton/Minden Pictures/Getty Images hide caption 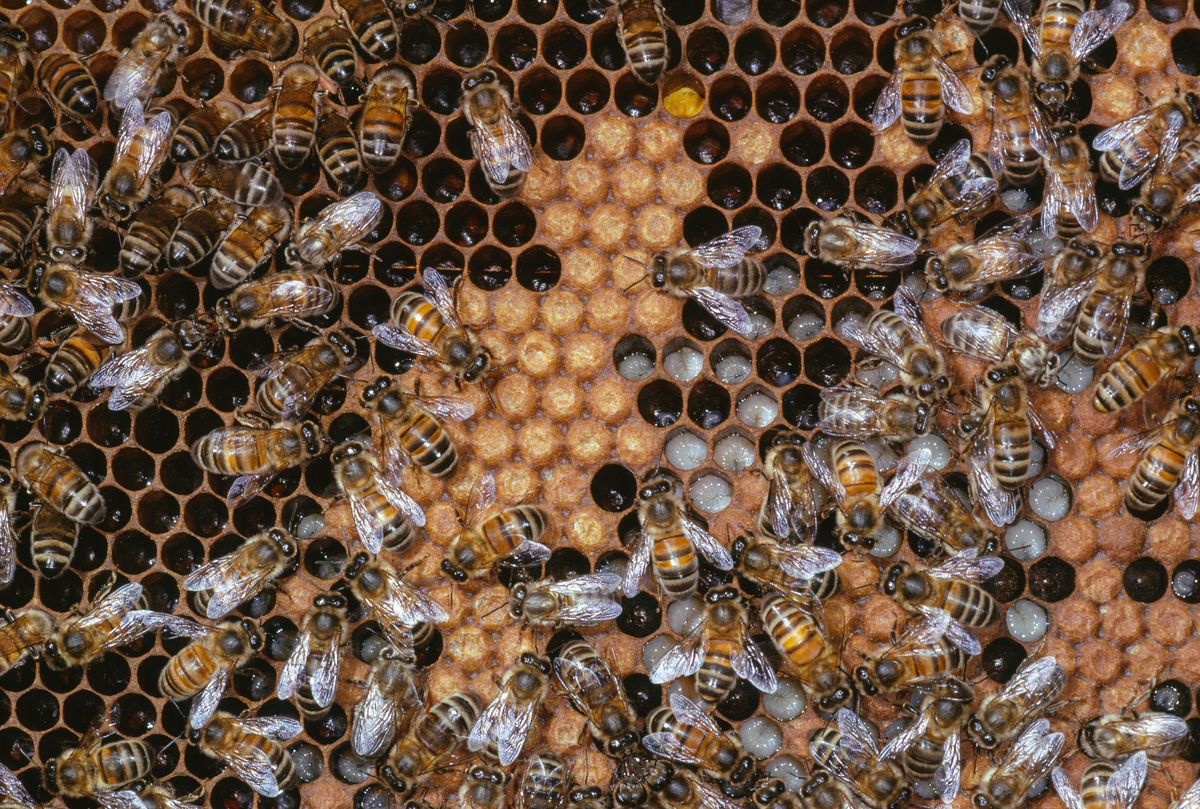 Honeybee (Apis mellifera) workers tending larvae on brood comb. The larvae that will grow up to be workers have a plant-based diet of a mix of honey and pollen.

When a female honeybee hatches, her future holds one of two possible paths within the hive's caste system. She will become either a worker bee or a queen bee. And her fate is determined in part by the food she eats as a larva.

Larvae that are fed mostly a bitter type of pollen combined with honey, a mixture called "beebread," grow up to be worker bees. They are generally sterile and destined for a life of housekeeping tasks. Future queens, on the other hand, grow up on royal jelly -- a goopy, yellowish substance rich in proteins, sugars and fatty acids that is secreted from the glands of worker bees. The queen's sole task in life is to make more bees. She also lives a longer life and has a stinger she can use more than once without dying.

So what is it about the two different diets that determines the caste of bees? It's a question that bee researchers have puzzled over for a long time. A study published Thursday in the journal PLOS Genetics suggests that the plant-heavy diet of a future worker bee helps prevent it from becoming a queen.

One difference between beebread and royal jelly is that the former has a higher concentration of tiny pieces of plant genetic material called microRNAs. These molecules are known to influence the expression of genes. "Plant microRNAs play important roles for the plant development and physiology," says Chen-Yu Zhang, a biochemist at Nanjing University in China and an author on the new study. "One set of the microRNA we tested is also important to the plant to make their flower bigger, more colorful."

And their past research also showed that differences in the plant RNA content of foods changed gene expression in honeybees and fruit flies. So they wondered: Could plant microRNAs influence development in honeybee larvae?

To answer the question, they created a synthetic beebread in the lab, adding microRNAs to it that they extracted from pollen in flowering plants. Larvae that ate this synthetic beebread weighed less, were shorter and had smaller ovaries compared with those that didn't eat it. In other words, they were more like worker bees.

And the larvae that were not fed beebread (with the added microRNAs) grew up to be more queenlike. They had bigger bodies and larger ovaries.

"Plant microRNAs really mediate the honeybee caste formation," says Zhang. The molecules seem to slow the growth of the bee larvae, keeping their ovaries so small that they are sterile.

Gene Robinson, director of a genomic biology institute at the University of Illinois Urbana-Champaign, says this new study is exciting. It raises the possibility of a new component of honeybees' diets that might be influencing their social fate.

"As we've gone into the genomic era in the past 25 years, the interest increasingly is understanding the molecular basis for these nutritional effects," he says. But "exactly how are the substances in the bees' diets engaging with internal systems, molecular pathways, to actually flip the switch?"

The new study also looked at how these microRNAs could be affecting the bees' development. Their findings suggest that one of the microRNAs targets a specific gene called amTOR, which has been shown to influence the development of queen bees. They also suspect that other plant microRNAs and RNAs also influence bee development.

A big question about the new study is whether these small microRNA molecules can survive in the larvaes' digestive tracts long enough to alter gene expression. The researchers' previous work suggests they can, but some researchers have expressed doubt over their claims.

However, Zhang and his colleagues stress that RNAs are probably not the only factor determining a bee's fate. The nutritional content of royal jelly, for example, may also play a role in helping honeybee larvae become queens. And p-coumaric acid, another plant-based compound present in honey, also seems to change gene expression to nudge bee larvae toward developing into worker bees.

Robinson says future research on this topic should delve further into understanding how these plant microRNAs "take the long and winding road" to being eaten by bee larvae and then influencing gene expression in them. "That's an amazing journey," he says. "And so we need to understand that whole process."