Accessibility links
Tuna-Fishing Countries Pledge To Recover Dwindling Pacific Bluefin Population : The Salt The long-term agreement would aid fish stocks that have fallen to just 2.6 percent of their historic size. The news comes at a time when Atlantic bluefin populations are also rebounding. 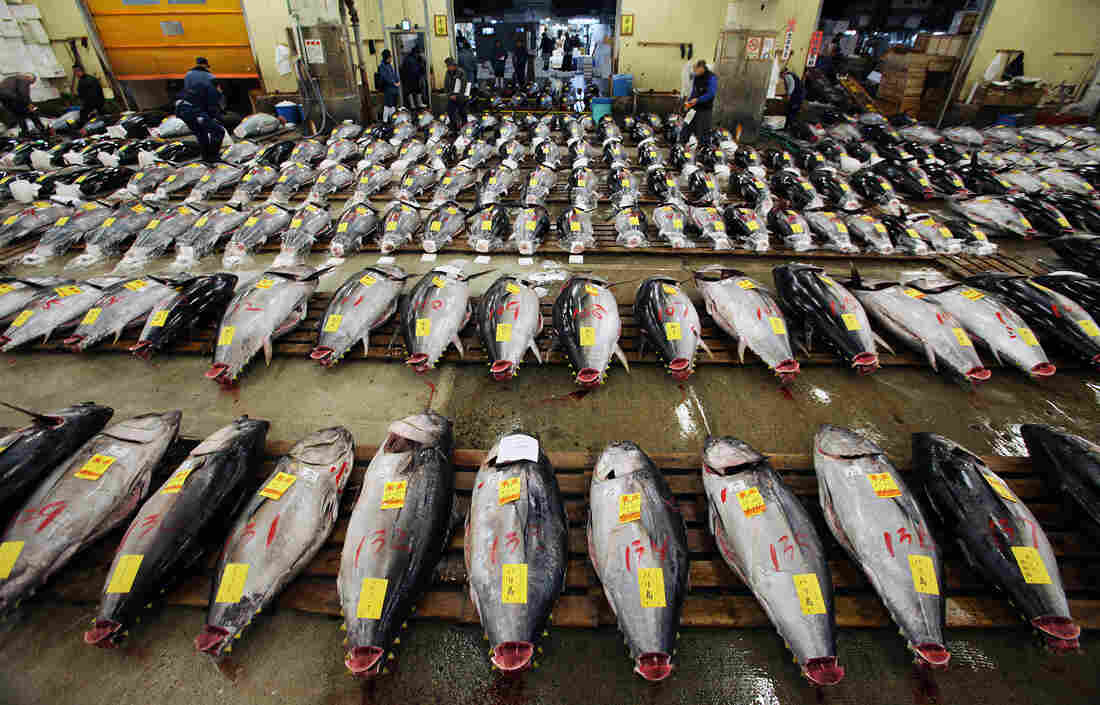 Tuna are arranged prior to the first auction of the year at Tsukiji Fish Market in Tokyo, Japan. The new agreement to protect Pacific bluefin tuna is aimed at putting the species on a path to recovery by setting sliding catch limits. The Asahi Shimbun/Getty Images hide caption 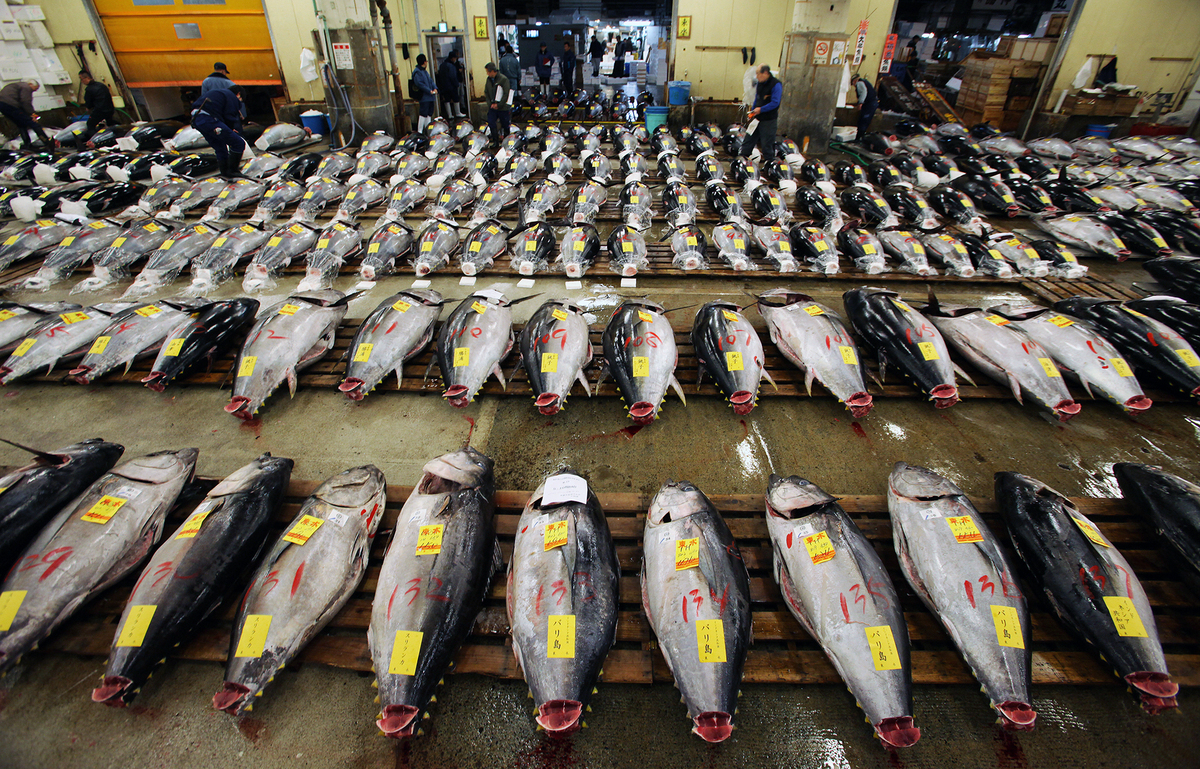 Tuna are arranged prior to the first auction of the year at Tsukiji Fish Market in Tokyo, Japan. The new agreement to protect Pacific bluefin tuna is aimed at putting the species on a path to recovery by setting sliding catch limits.

When it comes to bluefin tuna, it's not often we have good news to share, but spin the globe today, and there's cause for celebration in both the Pacific and Atlantic.

In a joint meeting Friday in Busan, South Korea, the two groups that manage Pacific bluefin tuna reached a historic long-term agreement that would put the species on the path to recovery. The Western and Central Pacific Fisheries Commission and the Inter-American Tropical Tuna Commission agreed to take steps to rebuild the population to 20 percent of historic levels by 2034 — a sevenfold increase from current levels.

Stocks of Pacific bluefin have fallen to 2.6 percent of their historic size, with countries like Mexico, Japan, Korea and the U.S. exceeding fishing quotas within the last two years. This is a population in dire need of the protection that finally arrived Friday.

The groups agreed to establish sliding catch limits to reach that goal, based on how well the stocks recover in coming years, and have agreed to a harvest strategy timeline that includes stakeholder meetings over the next two years. The management groups have also committed to finding ways to prevent illegally caught bluefin tuna from reaching markets.

"The really big, exciting thing is they have all agreed to a 20 percent target for recovery. It's the level at which you can say this population really has a chance," says Amanda Nickson, director of Global Tuna Conservation at Pew Charitable Trusts.

Should Pacific Bluefin Tuna Be Listed As An Endangered Species?

"This is a resilient population," says Nickson. In other words, if the fish are allowed to survive and reproduce, the population is likely to bounce back. Also important, she adds, is that the rebuilding target will still allow for some fishing activity. That's key to maintaining the tuna fleet as stocks replenish.

The news comes on the heels of the National Marine Fisheries Service's closure this week of the U.S. commercial Pacific bluefin fishery for the remaining four months of the year after fishermen exceeded the 2017 quota of 425 metric tons.

Environmental groups were disappointed last month when the U.S. federal government denied a petition to list Pacific bluefin tuna as an endangered species.

There are currently 1.6 million Pacific bluefin in the Pacific, and of those, 145,000 are reproducing adults. "So while the numbers of bluefin tuna are much less than desirable, there are still a lot out there," says Yates.

Bluefin Blues: Valuing A Tuna Species Before It's Too Late

Despite the disappointment of the petition's denial, Friday's agreement is likely to help populations rebound. And the good news doesn't stop there.

This spring, rumors began to swirl among the scientific and environmental communities that Atlantic bluefin tuna — an iconic species, whose declining population levels have prompted hand-wringing as far back as 1991 — may finally have achieved full recovery.

But like many juicy rumors, it was only partially true.

"Some models have the stock skyrocketing to higher levels than we saw in the 1950s. Other models use more information and account for uncertainty in the data," says Clay Porch, the bluefin tuna coordinator for the Standing Committee for Research and Statistics for ICCAT and director of NOAA's Sustainable Fisheries Division.

"This year's [assessment] was different because of the sheer amount of new information we were trying to incorporate," Porch says.

ICCAT and the scientific community as a whole expended a lot of resources mining historical data and collecting new data. They performed tagging studies and expanded biological sampling of the fish to help determine age, genetics and where the fish were born.

"It was a complicated affair," he says.

Although they share an ocean, Atlantic bluefin tuna are actually counted as two distinct stocks. The significantly larger stock comes from the Eastern Atlantic and Mediterranean. The Western Atlantic stock, which swim off American shores and spawn in the Gulf of Mexico, is the smaller of the two. The latest assessment suggests both stocks are improving, with the greatest growth coming from tuna in the Eastern Atlantic.

"After decades of mismanagement and illegal fishing ... the good news is the managers have followed the scientific advice and it shows that science-based management of Atlantic bluefin is working," says Rachel Hopkins, senior officer at The Pew Charitable Trusts' Global Tuna Conservation program.

But Hopkins cautions that there's reason to believe that the stock closer to home isn't recovering as robustly. There is concern that what appears to be population growth in the Western Atlantic bluefin could be inflated because Eastern bluefin have been migrating over and mixing with the Western stock.

"Western [stock is] growing, but there is concern that growth may not be growth at all," says Hopkins. "But Eastern Atlantic bluefin are certainly cause for celebration."

And it looks like that good news could someday be mirrored in the Pacific, if Friday's agreement and goals are reached.

A previous photo used to illustrate this story was actually albacore tuna, not Pacific bluefin.