Accessibility links
The Rise Of Mock Meat: How Its Story Reflects America's Ever-Changing Values : The Salt Summer's coming to an end, and whether for health or ethical reasons, more people are flipping veggie burgers — which have come a long way since the sanitarium-created concoctions of the 19th century.

The Rise Of Mock Meat: How Its Story Reflects America's Ever-Changing Values

The Rise Of Mock Meat: How Its Story Reflects America's Ever-Changing Values 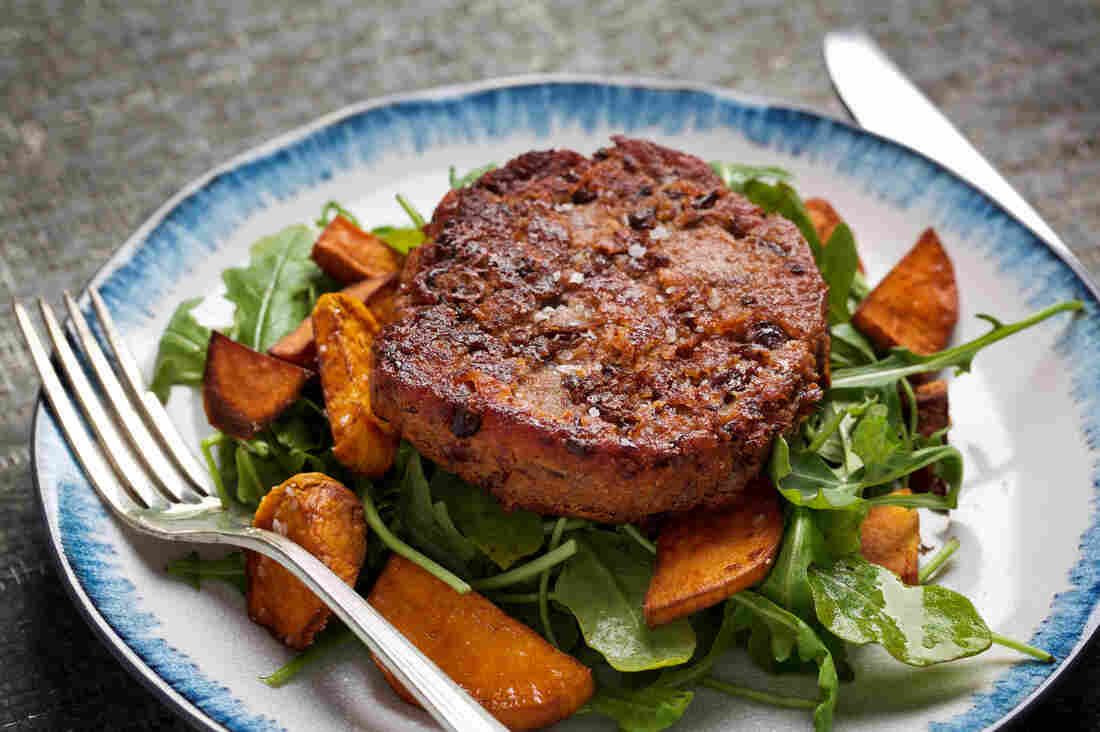 Today, veggie burgers are engineered to be more like meat than could have been conceived in the basement health-food stores of the 1980s or the sanitariums of a century prior. Deb Lindsey/The Washington Post/Getty Images hide caption 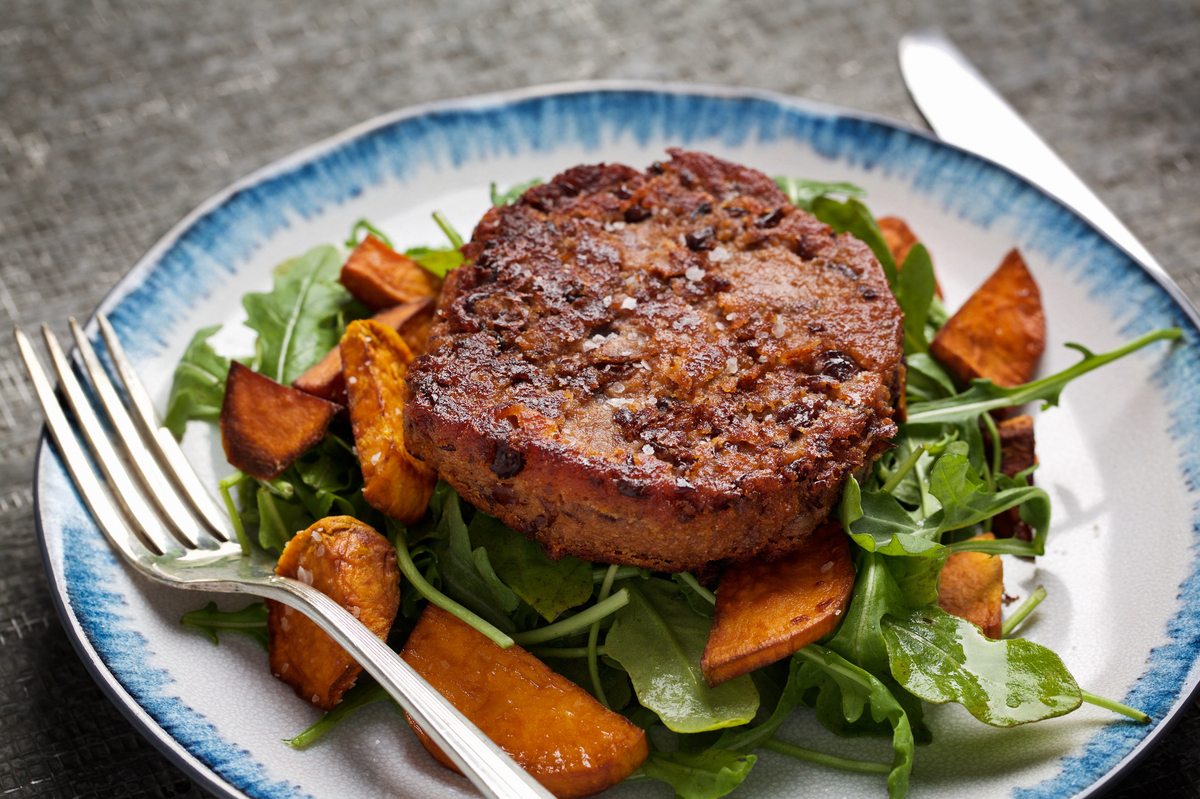 Today, veggie burgers are engineered to be more like meat than could have been conceived in the basement health-food stores of the 1980s or the sanitariums of a century prior.

Monday is Labor Day — the last hurrah of grilling for much of America. And at many of these summertime cookouts, you'll find veggie burgers alongside (or instead of) the traditional beef and brats. Whether for health, environmental or ethical reasons, more people are tossing veggie burgers on the grill — even carnivores.

Today's mock meats are getting closer and closer to the taste and texture of the real thing. But as more Americans embrace these next-generation veggie burgers, we can't help but wonder — where did veggie burgers come from in the first place?

For early vegetarians, the lack of a meaty veggie burger with decent char wasn't just because our forebears hadn't mastered isolating wheat gluten and pea protein. It was ideological.

"Through the 1850s and 1860s, vegetarian food is purposely plain," explains Pennsylvania's Marywood University historian Adam Shprintzen, who traced the history of early American vegetarianism in his book The Vegetarian Crusade.

"Part of the reason they're avoiding meat is the fear of overstimulation," he says. "Health reformers were afraid of blackening food with pepper and other spices that were thought to overtax the system."

In the mid-19th century, when the American Vegetarian Society formed, fare wasn't much more extravagant than boiled vegetables, coarse wheat breads and custards. But toward the end of the century, the food started to change, Shprintzen notes, in a way that mirrored the change in vegetarianism itself.

"The push towards mock meat really represents a push in the nature of vegetarianism," he says. "It tries to realign vegetarianism away from radical politics, and toward using vegetarianism as a vehicle for success — reform for the benefit of the individual, rather than social reform."

A broader approach to wellness

Against this backdrop, it's no surprise that the first commercial mock meat came out of one of the most famous destinations for personal health of that era — Michigan's Battle Creek Sanitarium.

Historian Howard Markel became well-versed in the intricacies of the sanitarium when he dug into the history of the men behind it for his book, The Kelloggs: The Battling Brothers of Battle Creek. And yes, we're talking those Kelloggs. Although the name is now synonymous with breakfast, their original mission was to take a broader approach to wellness, with a retreat founded on their Seventh-Day Adventist health principles — a vegetarian diet, with days full of exercise (and sans tobacco and alcohol).

Many guests of the Battle Creek Sanitarium signed up for the program because of dyspepsia — aka heartburn, indigestion, bloat and other such digestive unpleasantness. And Markel says it's not surprising, given the diet of the time.

"They ate a lot of cured salted meats simmering in fatty gravy, a lot of butter, a lot of fried foods, a lot of sugar — and washed it down with a lot of alcohol."

Although Dr. John Harvey Kellogg's vegetarianism was inspired by his faith, the prevalence of indigestion (Walt Whitman called it "the great American evil") gave Kellogg's clean eating a toehold in the wider culture, as the sanitarium drew guests such as women's and civil rights activist Sojourner Truth, pilot Amelia Earhart and Tarzan actor Johnny Weismuller. In addition to health treatments, guests dined on then-revolutionary dishes like those containing soy milk or probiotics, flaked whole grain cereals ... and mock meat.

"The doctor, as part of his own research, had a food lab," explains Markel. He, his wife, and his brother began to experiment with nut-based mock meats. And, according to the notebooks, there were a lot of experiments.

"It didn't hold together, or there wasn't enough gluten, or they found boiling them at too high a temperature made them taste acrid or sour. Sometimes they even measured barometric pressure," laughs Markel. "Like Edison, that's classic 19th century invention — you just try a million things until it worked. John Harvey Kellogg was exactly that type of inventor, but his lab was a kitchen."

After all this tinkering, the Kelloggs came out with mock meats formed from a mix of nuts and gluten. Their first success was Protose — Kellogg claimed that the product "resembles potted veal or chicken. It has a distinctly meaty odor and flavor. When a bit is torn off and chewed, it shows a distinct fiber. It is of such consistency that it may be masticated like tender meat and when cooked retains its form as does meat."

This may have been a bit of an exaggeration — by all accounts, Protose tastes like, well, peanuts. And gluten. But it was protein-filled (or, to use the parlance of the time, blood-building), palatable, and, most importantly, had a monopoly in the mock-meat market. Kellogg served it to guests, and also sold cans via mail order — Markel estimates that at their height, annual sales of mock meat totaled over one million dollars.

To boost popularity, Battle Creek produced recipe catalogues explaining how to make a delicious mushroom gravy for Protose, or to serve it to taste just like veal or chicken. Later products included veggie hot dogs, as well as "skallops" and other mock meats — although, Markel notes, "They were all made out of the same thing, just shaped differently. There are only so many nuts, and so many things you can do with gluten."

Other products followed suit in that era, mostly also from Adventist-affiliated corporations following a similar model of canned mock meat. For a while, that was pretty much the entirety of the mock-meat industry.

Paul Swanson, an intellectual property litigator with a special interest in food, dug into patent history to track the evolution of veggie burgers. After the initial spate of Protose-inspired mock-meat development, he says, the scene was fairly quiet (save for the mid-century development of Bac-O Bits, which are arguably more of a salad condiment than full-fledged meat substitute). But then, as the natural foods movement, countercultural resistance and other social movements took hold, eating habits similarly began to change.

"You go into the 70s, and there's a newfound movement for vegetarianism," Swanson observes. "You then have the second wave of innovation."

Products like Gardenburger and Boca Burger were developed, and began to spread across the country. These veggie patties not only tasted better than their turn-of-the-century forebears — they also ditched the cans, showing up in the freezer section.

"Product placement is really important — if they want to be thought of as fresh, there's a psychology thing going on," acknowledges Swanson.

While these patties were sold closer to the frozen beef burgers, the second wave of mock meat was still mostly for vegetarians, or those steering clear of saturated fats (these were the days before Meatless Mondays.)

But on today's grills, we'll find something that's more like a third wave of veggie burgers, engineered to be more like meat than could have been conceived in the basement health-food stores of the 1980s (or the Kellogg labs of a century prior). According to Swanson, the novelty is no longer in the processing, but in the materials themselves.

"The recent patents are more about the composition. Things that bleed ... they're doing so much work tearing apart and putting together plant matter."

Unlike the early religiously affiliated mock-meat producers, or the second-wave countercultural companies like Oregon's Gardenburger, some of these third-wave veggie burger makers (unsurprisingly) come out of Silicon Valley.

The vegetarians (or omnivores) who toss a veggie burger on the grill this weekend may be looking for a modern "disruption" of the meat industry — either for health, environmental or ethical concerns. Or they might just be wanting a delicious summer cookout. And they can achieve their tasty goal with a just-developed can't-believe-it's-not-meat creation, or the current iteration of the classic second-wave burgers.

Although sadly, not with Protose — the last cans stopped production after just about a century. But thanks to those pioneers, the modern-day bearers of the mock-meat torch can be found at pretty much any neighborhood grocery store.

Deena Prichep is a freelance print and radio journalist based in Portland, Ore.