Accessibility links
Michael Jacobson, A Pioneer Of Food Activism, Steps Down And Looks Back : The Salt Michael Jacobson invented a new style of food activism. For four decades, he led the fight against "junk food." He's now stepping down as president of the Center for Science in the Public Interest. 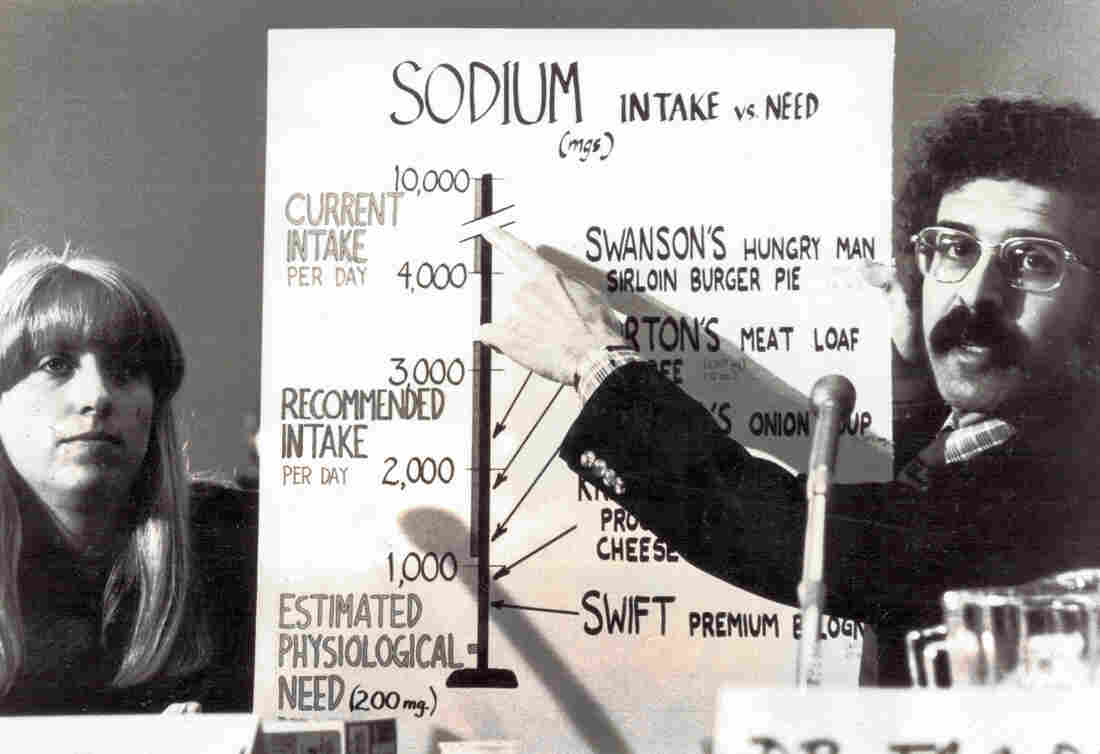 Michael Jacobson (right) and Bonnie Liebman, CSPI's director of nutrition, launching a campaign against over-salted food in the late 1970s. Courtesy of Center for Science in the Public Interest hide caption

toggle caption
Courtesy of Center for Science in the Public Interest 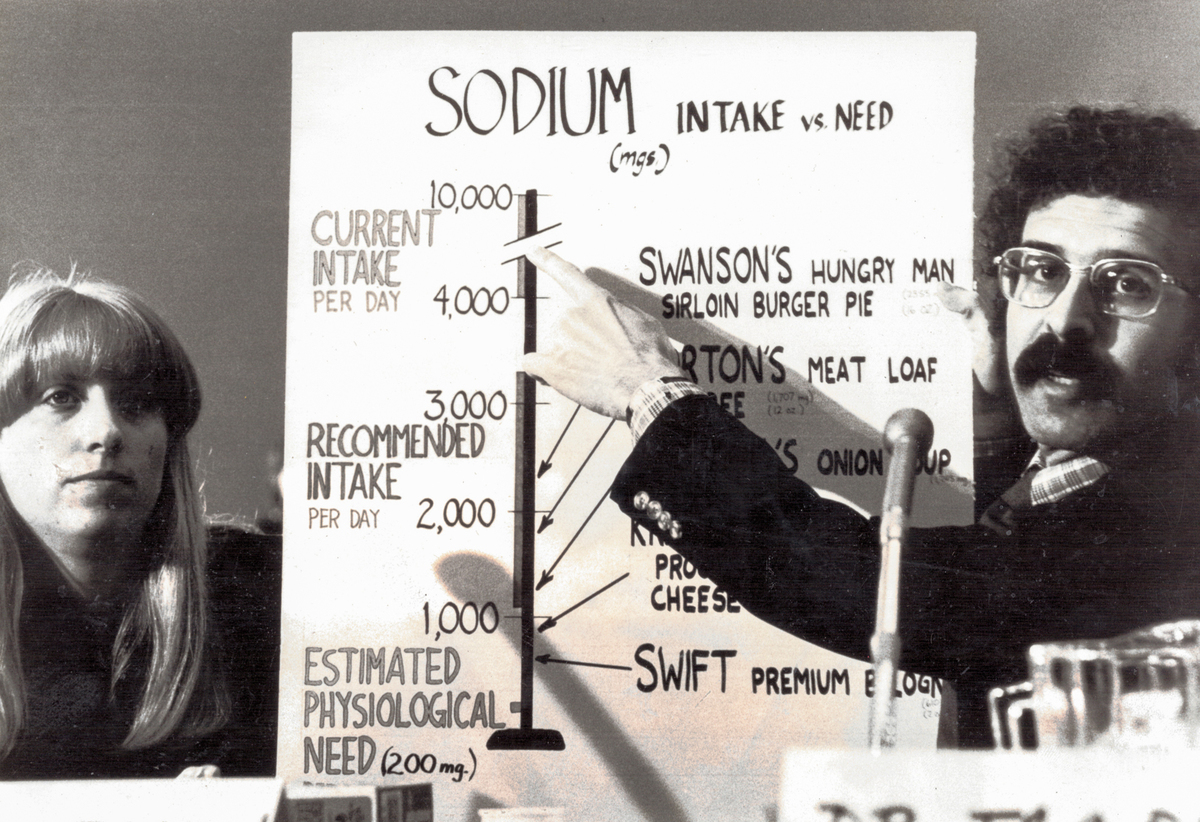 Michael Jacobson (right) and Bonnie Liebman, CSPI's director of nutrition, launching a campaign against over-salted food in the late 1970s.

Courtesy of Center for Science in the Public Interest

If you are the kind of person who picks up a box of food in the store and studies the label to see how much sugar or salt is in it, you can thank a man named Michael Jacobson.

Those labels with nutritional facts are a part of Jacobson's legacy, one of his many victories in a four-decade-long battle against "junk food." He has also had a hand in halting the marketing of many sugar-filled foods to children, reducing salt levels in packaged foods, and banning transfats. Next week, he's stepping down, after 46 years, as president of the Center for Science in the Public Interest in Washington, D.C.

Jacobson is a paradoxical character. When he's quoted in a news story, he typically sounds ferocious. But in person, he's soft-spoken and chooses his words carefully. He'll break into a friendly, wide-eyed smile while insulting the nutritional quality of your favorite breakfast cereal.

He is a food activist who doesn't really love food. When he was growing up, he didn't really care or notice whether the food he was eating was healthy. "You know, I'm a kid from Chicago. So a hot dog on a white bun, with relish, that's what you eat!" he says.

He found his calling by accident, in 1970. He was 26 years old, on track toward a career as an academic scientist. He'd just received his doctorate in microbiology at the Massachusetts Institute of Technology. But he'd also been caught up in the political ferment of the time.

"I loved laboratory research," he says. "My experiments worked well. But I saw cities burning down, Vietnam being toasted to a crisp, and I thought, 'Do I want to spend all my time in a lab, or could I be doing something using my background that would have a more direct involvement in trying to improve society?' "

He landed an internship with Ralph Nader's newly founded group of activist lawyers. Nader had become a household name a few years before that, by fighting the auto industry on behalf of consumers.

Jacobson showed up on the first day, "and Ralph says, 'OK, here's Jacobson, he's got a Ph.D. from MIT in microbiology. What could he do?'"

One of Nader's associates, Jim Turner, had been investigating the Food and Drug Administration and proposed that Jacobson write a book about the safety of food additives. At the time, some people were starting to worry about what might be in all the packaged foods filling supermarket shelves.

Once he started digging into the subject, Jacobson decided that the problem wasn't so much the additives, it was the all-natural sugar, saturated fats and salt that companies were putting into their products.

In 1971, he and two co-workers set up the Center for Science in the Public Interest (CSPI). It combined scientific expertise with a shrewd sense of how to capture public attention. "We were very anti-establishment, countercultural, really took every opportunity to slam the food industry," Jacobson says.

Originally, CSPI worked on a variety of issues, but after Jacobson's co-founders left, it focused solely on food.

In those early days, CSPI did a lot of things just to get attention — and to raise money. It sold hundreds of thousands of colorful posters rating foods according to their nutritional value. "The sales of those posters really helped keep CSPI alive in the early 1970s," Jacobson says.

They organized a Food Day, modeled on Earth Day, with concerts and other public events in cities across the country; sent a bag full of extracted, decayed teeth to the Food and Drug Administration, to illustrate the dangers of sugar; and invited journalists to watch them measure the calories and salt in restaurant meals.

Some mementos from those rabble-rousing days are on display in the lobby of CSPI's office. "This is the coin release from a vending machine," Jacobson says with a smile of satisfaction, pointing to one shiny piece of metal. "We had a vending machine smash-in at a Food Day event in Portland, Ore. It was a lot of fun. This is all that's left."

The display case also includes a copy of the first Nutrition Action newsletter, CSPI's flagship publication, which became the biggest nutrition-focused publication in the country. It delivered advice on what foods to eat and avoid, summarized the latest nutrition research, and rallied public support for CSPI's campaigns. In the 1990s, the newsletter had nearly a million subscribers, and sales covered most of the organization's budget.

Jacobson's message hasn't changed much over the years, but his organization has, and so have its tactics.

Today, CSPI has a staff of 50, and its Washington, D.C., offices could easily be mistaken for those of a trade association or law firm. "It's a long way from our scruffy offices with flooded basements," Jacobson says.

Instead of just organizing public protests, CSPI is now more likely to take lawsuits accusing food companies of deceptive labeling, or of targeting children with advertisements for unhealthy food. "We've had quite a good success rate in getting change," Jacobson says. "Maybe that's when the industry really took us seriously, because when you go to court, you're playing on a pretty level playing field."

If he had it to do over again, he says, "I would have hired more lawyers, earlier," he says. "Lawyers know the rules of the game. Scientists don't." 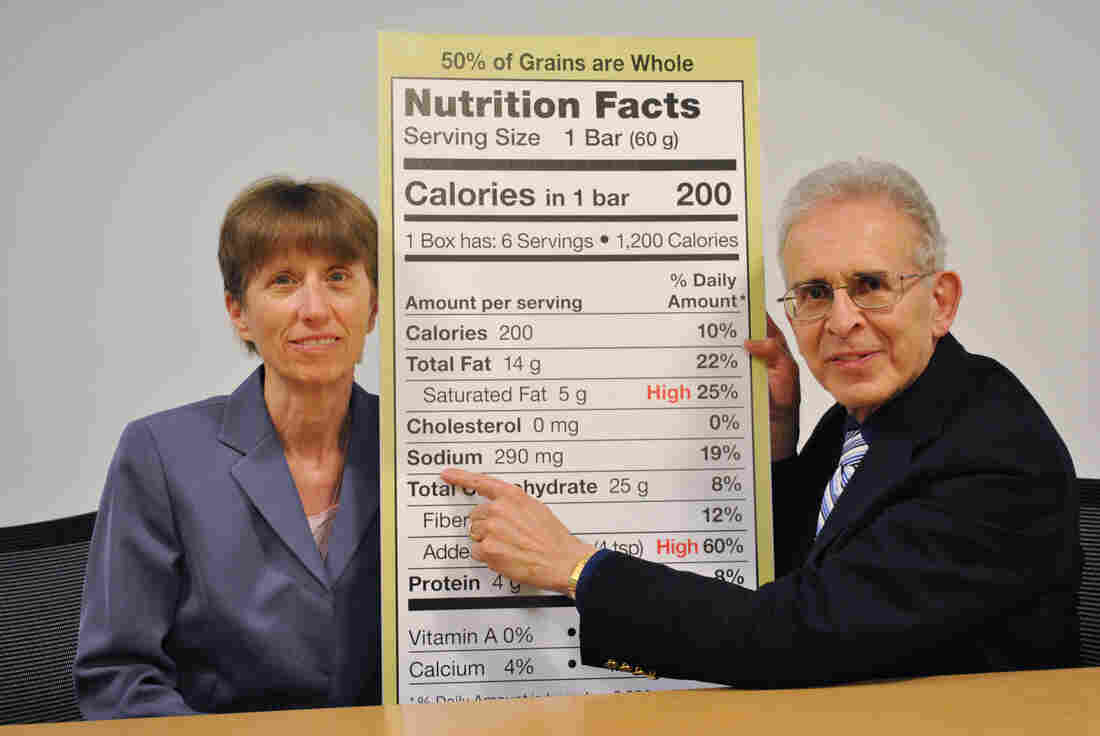 Their hair is shorter and grayer now, but Liebman and Jacobson still are campaigning against too much salt in food. This photo was taken last year. Courtesy of Center for Science in the Public Interest hide caption

toggle caption
Courtesy of Center for Science in the Public Interest 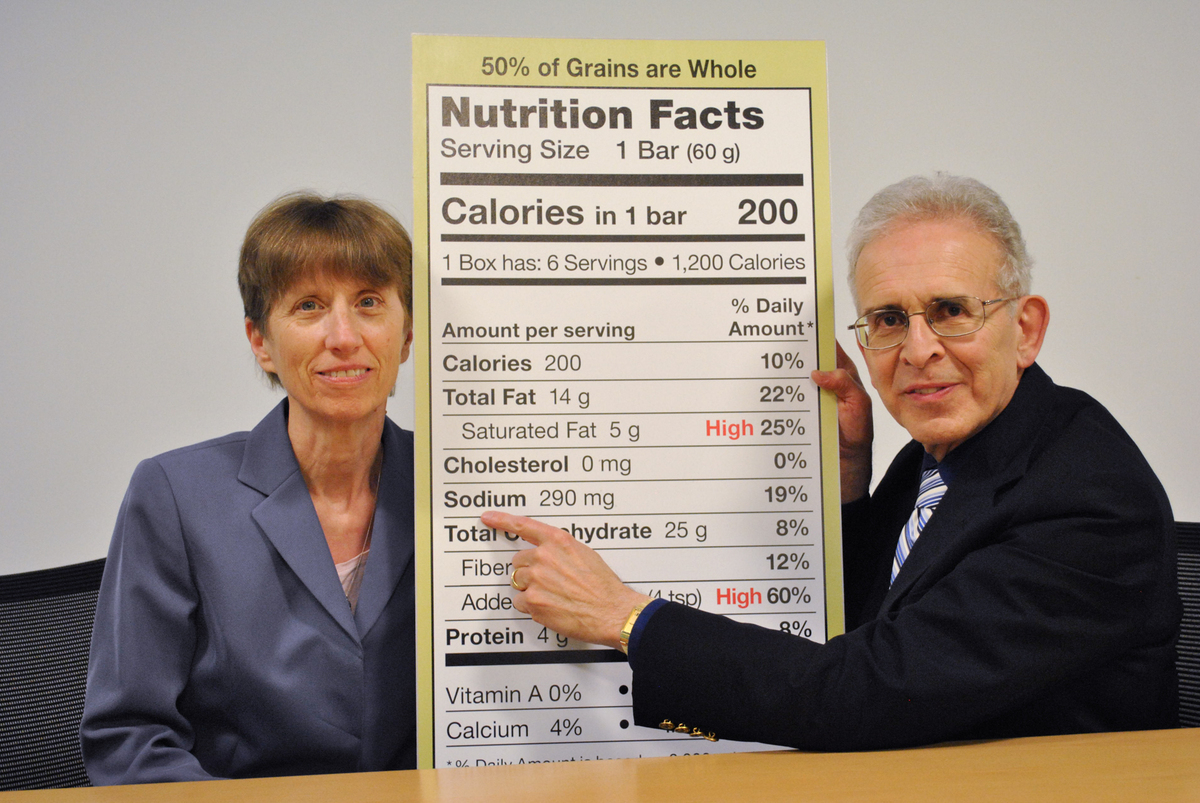 Their hair is shorter and grayer now, but Liebman and Jacobson still are campaigning against too much salt in food. This photo was taken last year.

Courtesy of Center for Science in the Public Interest

He has one other regret; he wishes he had realized earlier the value of talking to adversaries and allies alike. "In my early days, when I'd meet a corporate executive, I would just as soon yell at them as talk to them," he says. "Now I realize that those people know a lot more than I know about certain things, and that having a reasonable conversation makes sense."

Some corporate executives, for their part, say they've come to respect him.

"The restaurant industry, for many years, believed that Mike's theatrics were trivial and nonsensical," says Jonathan Blum, a former executive with Yum! Brands, the parent company of Taco Bell, KFC and Pizza Hut. Calling fettuccine Alfredo a "heart attack on a plate," he says, "wasn't helpful and didn't change behavior in anyone." But after Jacobson became more open to conversations with industry, "we all took him more seriously," Blum says. "He's been a force to reckon with. I think he's done a terrific job for consumers, working reasonably with the industry and legislators.

"Mike is driven by his heart, and he is also a scientist," says Richard Black, a former executive at Kraft Foods and at Pepsi. "You do well to listen to his arguments and the science that he's using to support those arguments, because more than likely there will be something there that you need to pay attention to."

Black appreciated Jacobson's openness about his goals, as well as his tactics. "He'd say, 'Look, we think you're doing something misleading, and if you don't address it, we'll probably end up suing you.' It was .... honesty, not in an angry or mean manner, but actually trying to get something done."

Some of Jacobson's critics, and many journalists — also one journalistic impostor, Stephen Glass, who published a fraudulent profile of Jacobson in The New Republic in 1996 — have portrayed him as the nation's food scold, intent on taking all the pleasure out of eating.

Jacobson says that's a cheap shot. "We never said you have to be pure," he says. "It's perfectly fine to eat a little junk from time to time." It's true, he personally gave up hot dogs, and eventually all meat. But he still puts sugar in his tea.

After 40 years of trying to change America's food habits, Jacobson has come to terms with the fact that those habits change very slowly, if at all. Nutrition labels, for instance, "haven't generated as much change as we hoped."

Jacobson has been successful in persuading food companies to make healthier products, but many consumers refuse to buy them. "Still, people are eating a pretty junky diet," Jacobson says. "One of the saddest things is fruits and vegetables. Despite all the free publicity that fruits and vegetables get, requirements in school food programs, farmers markets everywhere, fruit and vegetable consumption has not increased in 20 years."

Despite all that, he's optimistic. "When I think back to supermarkets when I got into the food biz in the early 1970s, you couldn't find whole wheat bread, you couldn't find brown rice, you couldn't find yogurt," he says. "There have been such huge changes! I think our culture clearly is moving in a much healthier direction. And industry will follow. Industry is following."

Jacobson, who's 74 years old, is vacating his corner office at CSPI on Sept. 12, but he won't leave the organization entirely. He will work half-time as a senior scientist.