Accessibility links
Pacific Northwest Winemakers Worry Wildfire Smoke Could Ruin Harvest : The Salt The smoke and ash hanging in the air from the still-burning Eagle Creek Fire in the Columbia River Gorge could easily transfer to the grapes, potentially changing the quality of the wine. 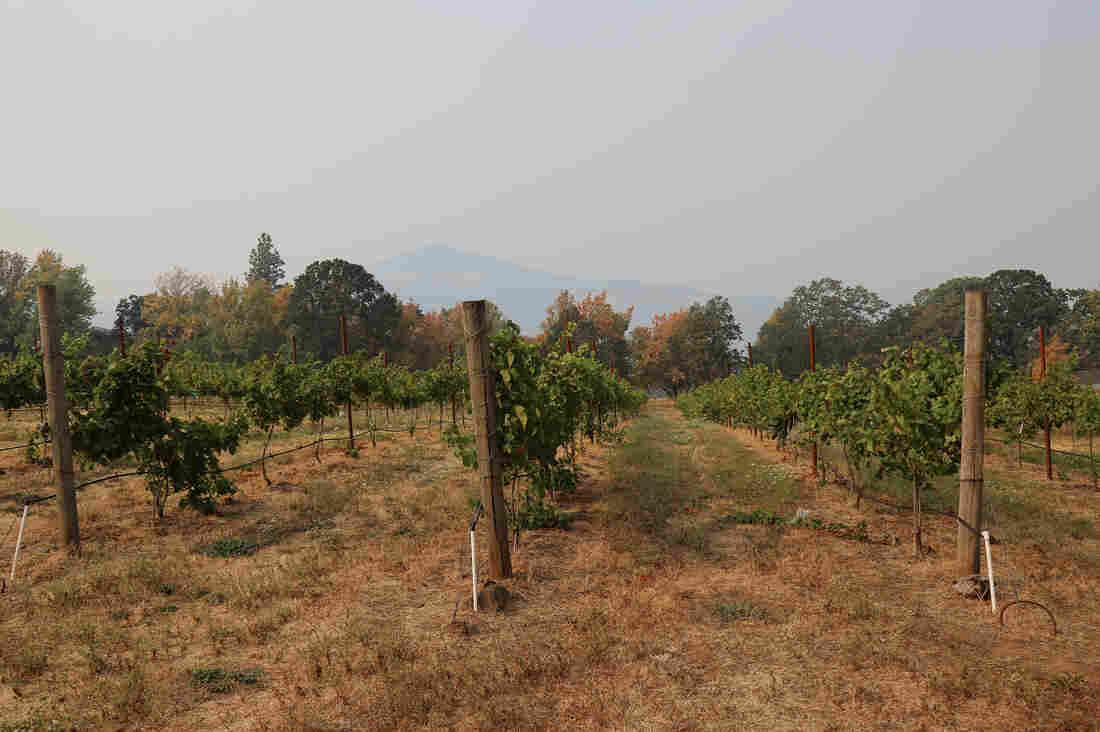 At the Cathedral Ridge Winery in Hood River, Ore., smoke has poured into the property and there are worries it could alter the taste of the grapes. Molly Solomon/OPB hide caption 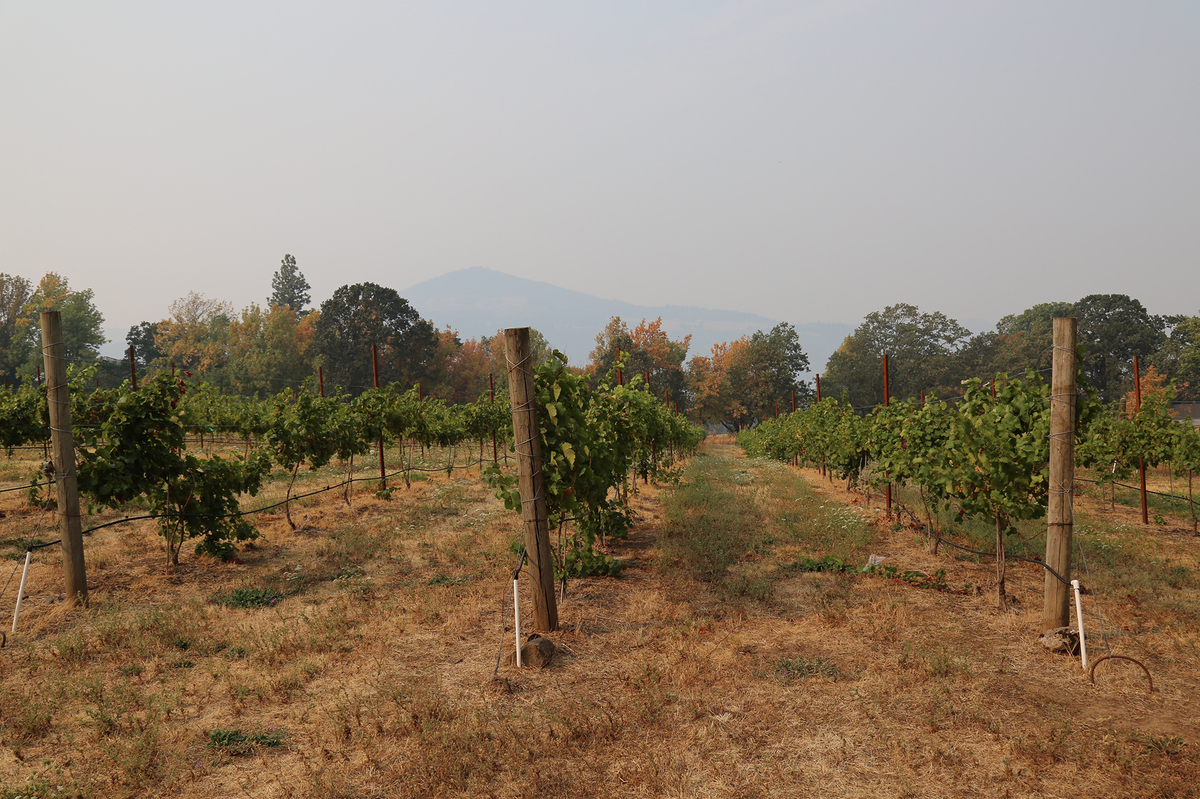 At the Cathedral Ridge Winery in Hood River, Ore., smoke has poured into the property and there are worries it could alter the taste of the grapes.

On a clear day, Jocelyn Bentley-Prestwich can see Mount Adams from the vineyard where she works in Hood River, Ore. But lately, she's had difficulty seeing to the end of her property line.

With the Eagle Creek Fire burning along the Columbia River Gorge, Hood River has been cloaked in heavy smoke for more than a week. The fire now covers roughly 36,000 acres and has been burning since Sept. 2. Fire crews don't expect to be able to contain it until the end of the month.

"The first couple of days, you couldn't even see past those trees," Bentley-Prestwich, manager of the 7-acre Cathedral Ridge Winery, says as she points a couple of yards away.

"We're one of the larger-trafficked wineries in the area because we have such sign visibility from the highway," she says.

But with Interstate 84 closed because of the fire, business has slowed to a crawl. Normally, on a warm September day, the tasting room would be packed, with close to 150 people stopping by.

"Right now, we're not even seeing half of that," says Bentley-Prestwich. "It's pretty shocking."

But it's not just the hit to tourism that's concerning.

Outside in the vineyard, Bentley-Prestwich shows off a row of Riesling grapes ripening on the vine. She pops one into her mouth, testing it for ripeness.

"Still a little tart, but they're good," she says, estimating another week until the grapes are ready for harvest.

The taste is an important factor. All the smoke and ash hanging in the air could easily transfer to the grapes, potentially changing the quality of the wine.

"When you have this much smoke in the air, you have complete climate change: It's cooler, the atmosphere is different," Bentley-Prestwich explains. "If it's hazardous for us to breathe, you can only imagine what's happening when it falls on the leaves and the grapes."

Bentley-Prestwich says the effects of wildfire smoke are being debated in wine circles across the West Coast. Several discussions have been held with local wineries, including one organized by the Oregon Wine Board in early September.

Behind California, Oregon and Washington have the highest number of wineries in the country. Together, the industry brings in more than $5 billion a year to the Pacific Northwest. But with wildfires becoming all too common in the region, some growers are turning to science for help.

"There's concern all up and down the West Coast with the fire intensity that we're seeing," says Thomas Henick-Kling, director of the Viticulture and Enology department at Washington State University.

Henick-Kling's department is the only one in the country leading research on what happens when grapes are exposed to smoke for extended periods of time. He says more often, they develop a certain taste or smell called "smoke taint."

"These wine taints are described as sometimes campfire, but also ashtray. Those aromas, of course, are not very attractive in a wine," he says.

Several treatments to remove smoke taint have been investigated, but none has proved to be entirely effective.

"There is no fix for smoke taint and it is unpredictable due to the fact that it evolves during the aging of the wine," says Anita Oberholster, a chemist with the Department of Viticulture and Enology at UC Davis.

Oberholster says just 30 minutes of exposure to heavy smoke can impart smoke taint to grapes at certain times of the ripening cycle.

And vineyards aren't the only agriculture producers concerned about the smoke. The harsh working environment has also given farmers pause.

"There's really no problems with the smoke regarding the fruit. But we are concerned about the workers," says Mike Doke, executive director of the Columbia Gorge Fruit Growers, which represents 440 growers and 20 shippers of tree fruit in the Mid-Columbia area.

The Taste Of Wine Isn't All In Your Head, But Your Brain Sure Helps

Orchards near the wildfires are providing masks and have been letting farmworkers go home early to minimize their exposure. Doke says if the smoke continues, growers could run into problems if farmworkers are not able to stay in the fields. He adds that it's also rough financially for the workers, who rely on more hours during peak harvest season.

"When it's harvest time, they work six to seven days a week," Doke says. "This is the time when people make their living."

Farther south, some growers have been dealing with smoky conditions for more than a month. Evan Kruse is the owner of Kruse Farms in Roseburg, Ore. His family has sold fruits and vegetables there since 1923.

"I remember growing up a few times that it was smoky in the area. But this was really the first time that it was oppressive," says Kruse. "And when it was at its worst, I couldn't see across some of our fields."

Kruse says he has suffered various symptoms from working in the smoke. Sometimes he would come home short of breath, his head pounding from migraines and dizzy spells.

On those bad smoke days, the farm wasn't able to set up for outdoor markets. And even when they did, few customers came by.

"If we have a slow day, a slow weekend, we can't make that up," he says. "That's opportunity lost for us."

For Michael Guebert, it's been more than a slow weekend.

The owner of Terra Farma, a pasture-raised livestock farm in Corbett, Ore., had to close up shop and relocate. His home and ranch is in the Level 2 evacuation zone for the Eagle Creek Fire. He spent last Monday moving his three dairy cows and 20 goats.

"I feel like we're safe for now," Guebert says. "But I didn't know if we'd have a home or a farm to come back to."

Guebert says he can't run a clean operation off-site and estimates that the closure is costing him $1,000 a week in lost income.

"If it continues, it will start to add up," he says.

At this point, Guebert says the best thing he and other farmers can hope for is rain.