Accessibility links
This Once-Obscure Fruit Is On Its Way To Becoming PawPaw-Pawpular : The Salt You won't find the pawpaw, which tastes like a cross between a mango and a banana, in most grocery stores, even though they're native to North America. But the locavore food movement has embraced it. 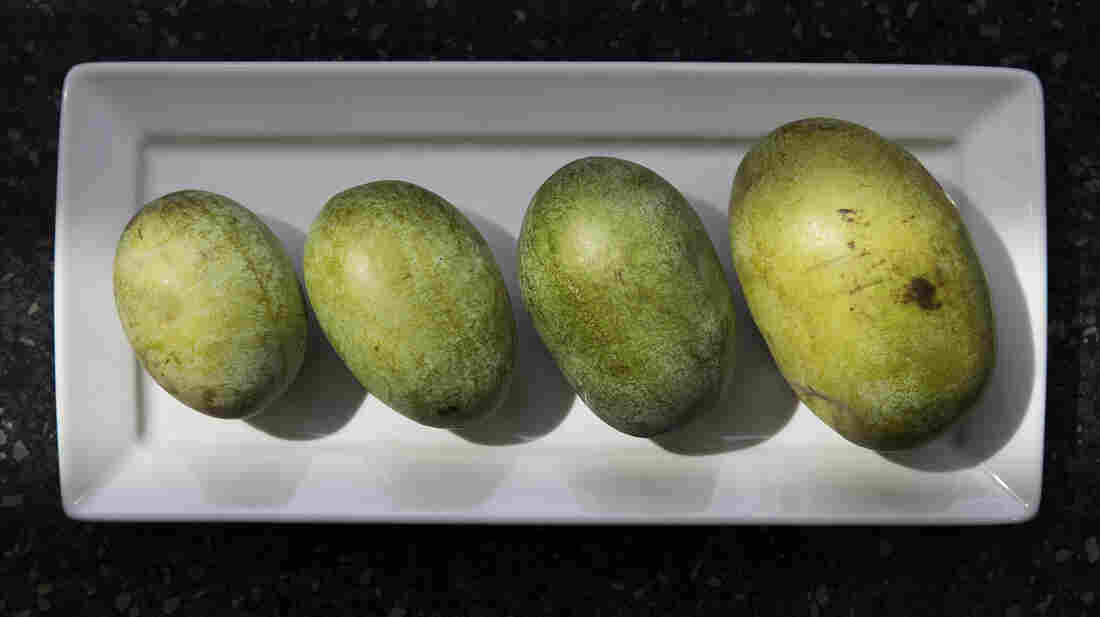 Heard of the pawpaw? It's a custard-like fruit native to North America — and it's growing in popularity. Here, a few pawpaw varieties from the Deep Run Pawpaw Orchard in Maryland. Tyrone Turner/WAMU hide caption

In the Deep Run Pawpaw Orchard outside of Westminster, Md., Donna Davis is showing me how the pros eat a pawpaw.

She jams her thumbs into the fruit's soft green skin and splits it open, innards oozing.

"Just suck out the flesh," she instructs, slurping up the yellow meat. "They can [taste like] a cross between maybe a mango and a banana. Some people taste little hints of pineapple."

She hands me a chunk — and mmm. It's sweet and custardy. I taste banana pudding.

Davis pauses, makes a funny face and spits out a mahogany pawpaw seed the size of a gigante bean. And just like that, it feels like autumn has arrived.

September is pawpaw season in a large swath of the U.S. This month, Davis and her husband, Jim, are plucking the mango-sized treats from trees in their orchard, depositing them carefully into bins so as not to damage the pawpaw's squishy flesh. They sell them to farmers markets and online gourmet stores, who advertise them as delicacies and price them at nearly $15 a pound.

Yet plenty of people have no clue the pawpaw exists. The Davises are among a handful of local pawpaw growers. You won't find the fruits in most grocery stores, even though they're native to North America. American Indians harvested them, and it's been said George Washington liked to eat chilled pawpaw for dessert. But much of the pawpaw's natural habitat was destroyed by development, and they're not that easy to cultivate. They need slightly acidic, well-drained soil, and harvesting them is labor-intensive.

But the Davises, who planted their trees in the '90s, gladly accepted the challenge.

"They said it couldn't be done," Davis says, laughing. "I think that's why my husband started [the orchard]."

Since the Davises began harvesting, interest in the pawpaw has grown. The locavore food movement has embraced the fruit. Now there are restaurants whipping up pawpaw pie and pawpaw gelato, and local breweries are starting to make pawpaw beer.

So while the fruit already had a long list of nicknames — Quaker Delight, the Hillbilly Mango — now it's earned another one: the hipster banana. 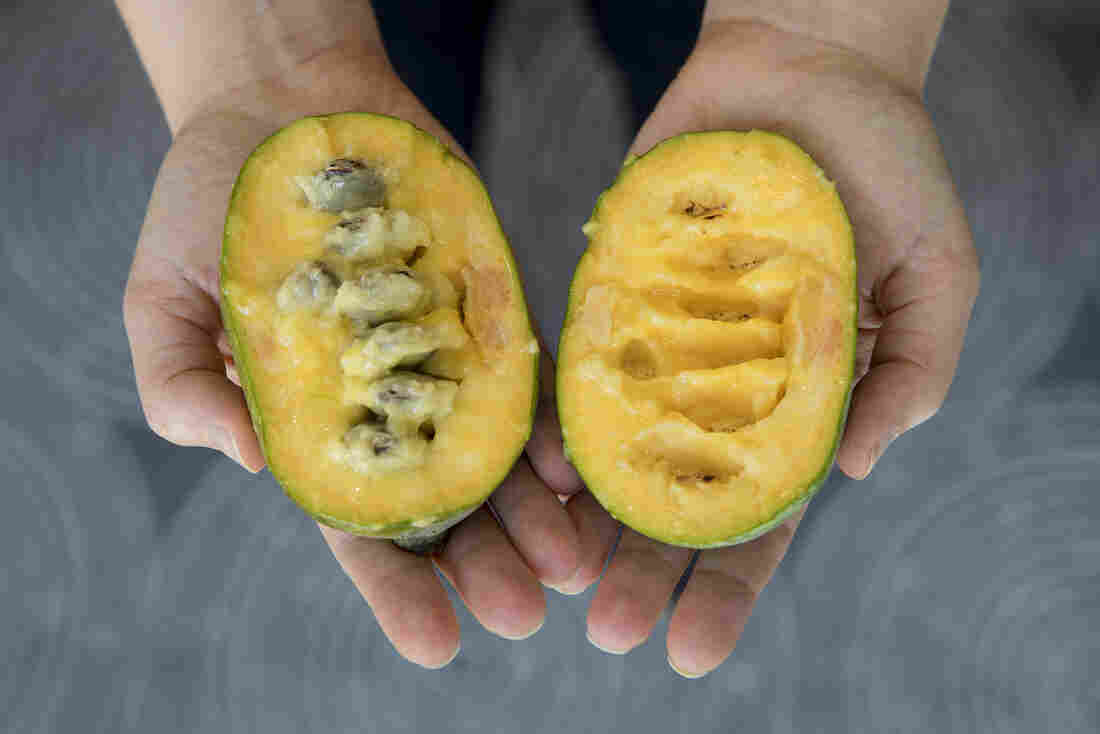 The inside of a pawpaw is soft and gooey. Tyrone Turner/WAMU hide caption 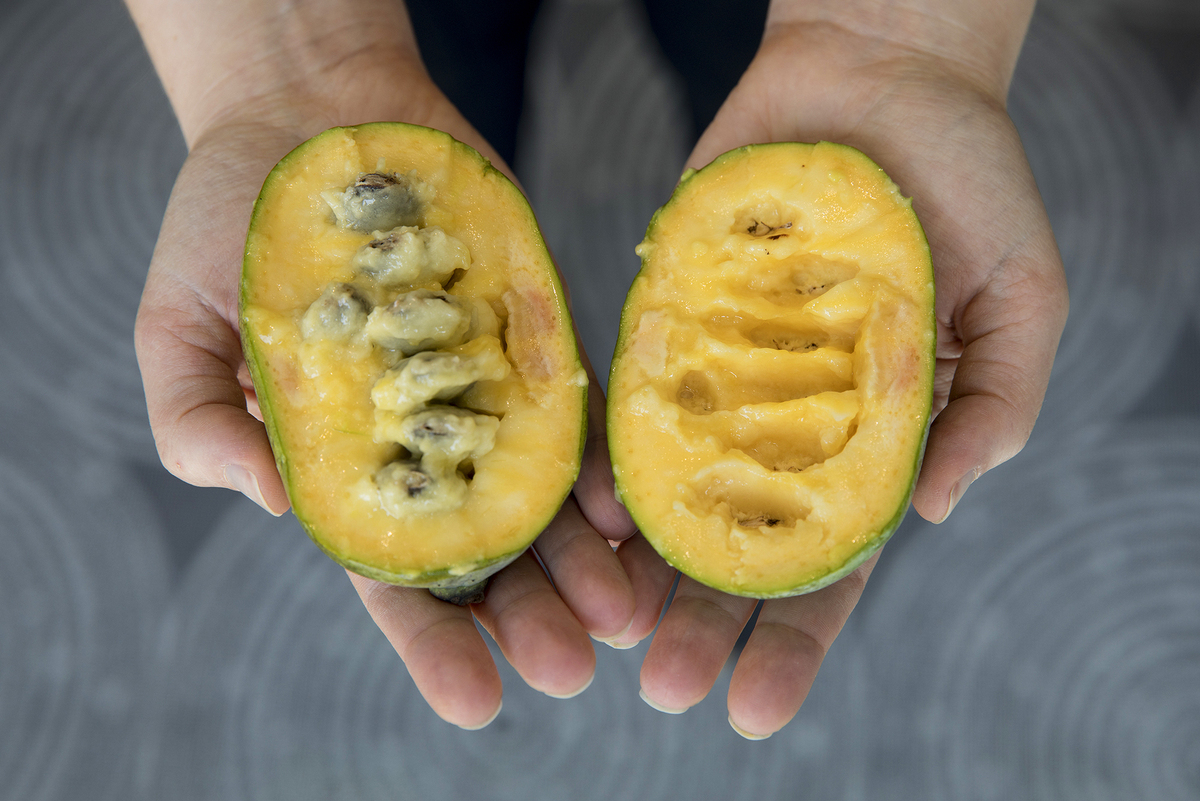 The inside of a pawpaw is soft and gooey.

At the fifth annual Pawpaw Festival last weekend in Montgomery County, Md., it's clear the pawpaw craze is well underway.

Karen Holt is standing in line at the Meadowside Nature Center in Derwood, Md., waiting to pay $50 for 10 large pawpaws. She drove over from a nearby county — and arrived two hours early, just in case.

"I got my pawpaws!" she says, clutching paper bags brimming with the soft fruit.

Holt says she plans to make pawpaw pie, but most people seem content to just eat them right out of their skin. Parents queue up at the tasting table, tipping paper cups filled with pawpaw into their kids' mouths. Grace Ruiz, who's here with her mom, says they taste like peaches.

Others describe the flavor almost like wine. Some said they detect notes of vanilla, caramel and coconut. One attendee compared the taste to bread flour.

Tiny Desk Kitchen: Ever Had A Pawpaw?

Just an hour into the festival, most pawpaws are sold out. But some attendees are walking out with pawpaw trees. Arthur Rypinski is one of the buyers.

"I'm gonna plant it in my backyard, where we have kind of a swampy, shady spot," he says, contrary to pawpaw growers' advice. He admits he doesn't have much of a green thumb. He calls himself a "slayer of plants."

Behind him, other pawpaw hobbyists wait to pay for their trees. Fortunately, the pawpaw's future isn't in his hands alone.

This story comes to us from member station WAMU in Washington, D.C.