Accessibility links
Dolores Huerta: The Civil Rights Icon Who Showed Farmworkers 'Sí Se Puede' : The Salt A key architect of the nationwide grape boycott that galvanized the farmworkers' rights movement, her legacy has long been overshadowed. A new film aims to change that. Huerta speaks with NPR. 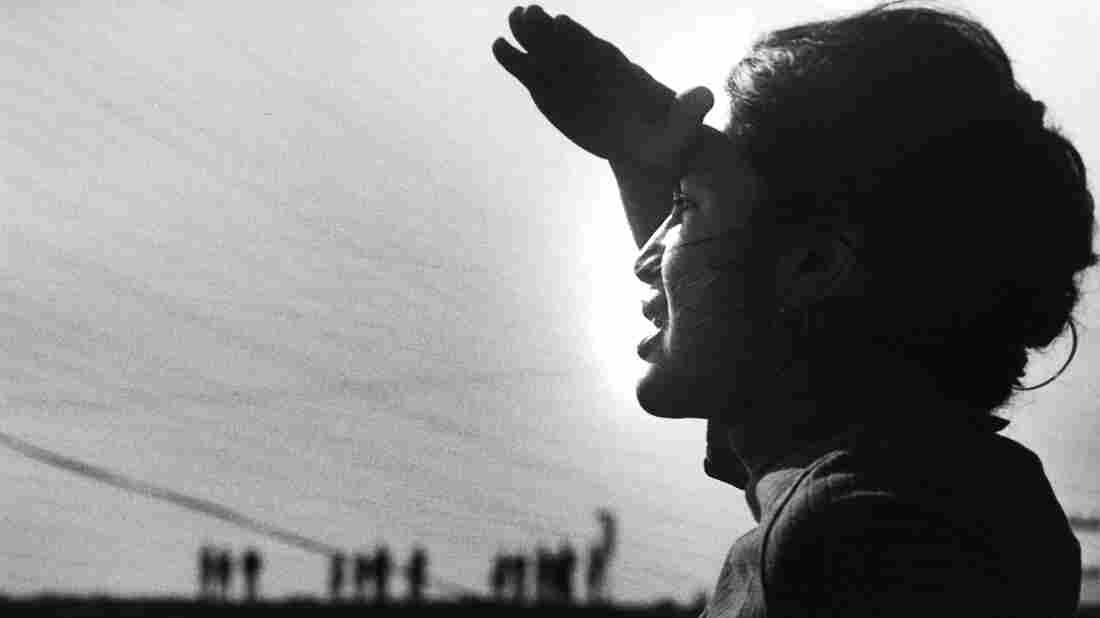 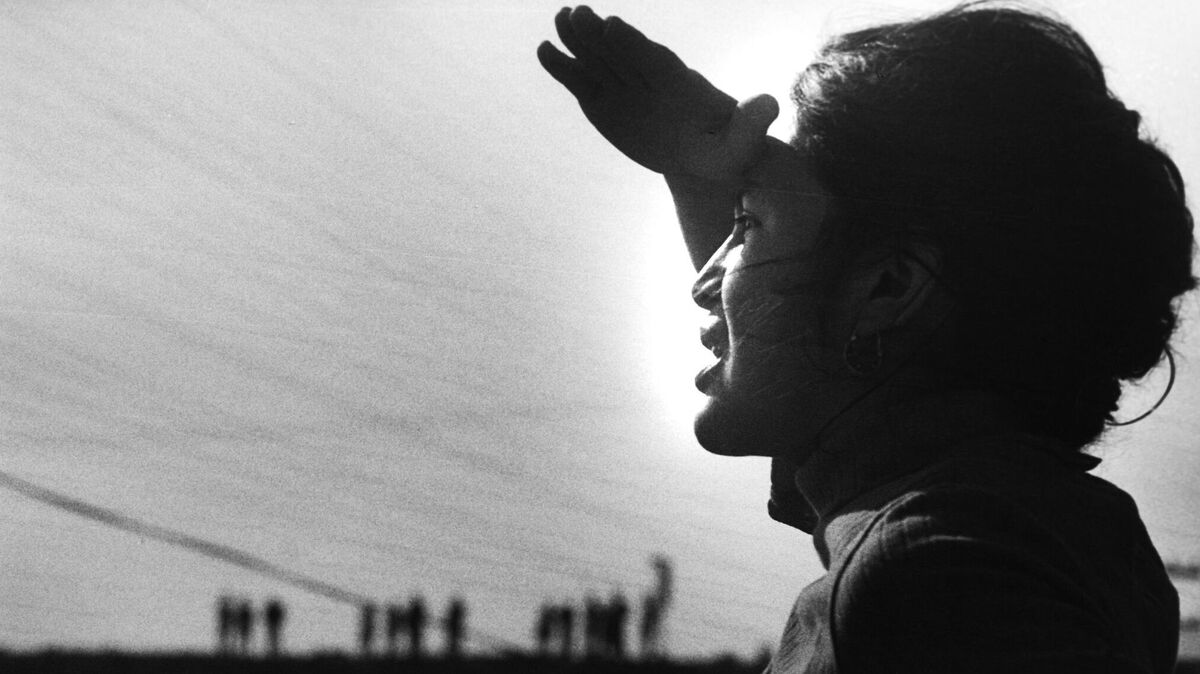 At 87, Dolores Huerta is a living civil rights icon. She has spent most of her life as a political activist, fighting for better working conditions for farmworkers and the rights of the downtrodden, a firm believer in the power of political organizing to effect change.

And yet, her role in the farmworkers movement has long been overshadowed by that of Cesar Chavez, her longtime collaborator and co-founder of what became the United Farm Workers of America union. That's true even when it comes to credit for coining the movement's famous slogan, Sí se puede — Spanish for "Yes, we can" — which inspired President Obama's own campaign battle cry and has often wrongly been attributed to Chavez. (Obama acknowledged Huerta as the source of that phrase when he awarded her the Presidential Medal of Freedom in 2012. She talks about its origins below.)

Dolores, a new documentary from director Peter Bratt, aims to finally set the record straight. The film chronicles Huerta's evolution from a teenager outraged by the racial and economic injustices she saw in California's agricultural Central Valley to a key architect of the nationwide boycott of grapes that led to the first farmworker union contracts. At its height, an estimated 17 million people stopped buying grapes.

Huerta was 25 when she became the political director of the Community Service Organization, run by influential community organizer Fred Ross. That's where she met Chavez, and in 1962 the two teamed up to form what became the UFA, organizing farmworkers who toiled for wages as low as 70 cents an hour, in brutal conditions.

In 1965, the grape workers struck, and Huerta was a leading organizer. She faced violence on the picket lines — and sexism from both the growers she was staring down and their political allies, and from within her own organization. At one point, a lawmaker is seen referring to Huerta as Chavez's "sidekick." At a time when the feminist movement was taking root, Huerta was an unconventional figure: the twice-divorced mother of 11 children. "Who supports those kids when she's out on these adventures?" one of her opponents is shown asking in historical footage.

Now grown, her children provide some of the most moving accounts in the film. They speak with great admiration for their mother, but are also candid about the price her tireless dedication to the cause exacted on the family. As one daughter puts it, "The movement became her most important child." 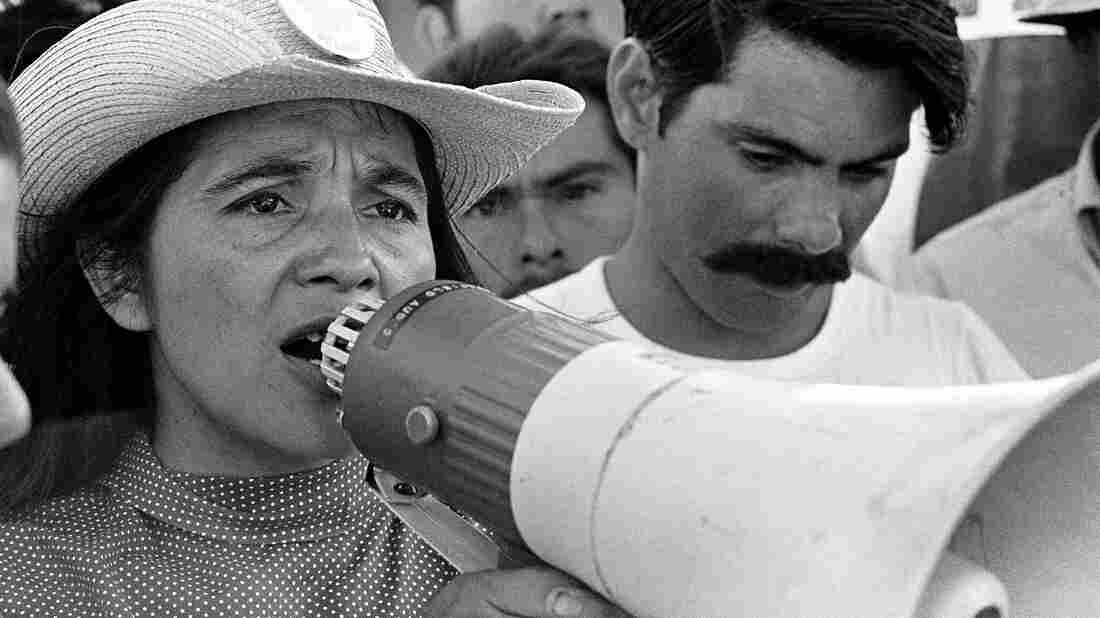 Huerta organizes marchers in Coachella, Calif., in 1969. She's been an outspoken activist for the rights of farmworkers and the downtrodden for much of her life. George Ballis//George Ballis/Take Stock/The Image Work hide caption 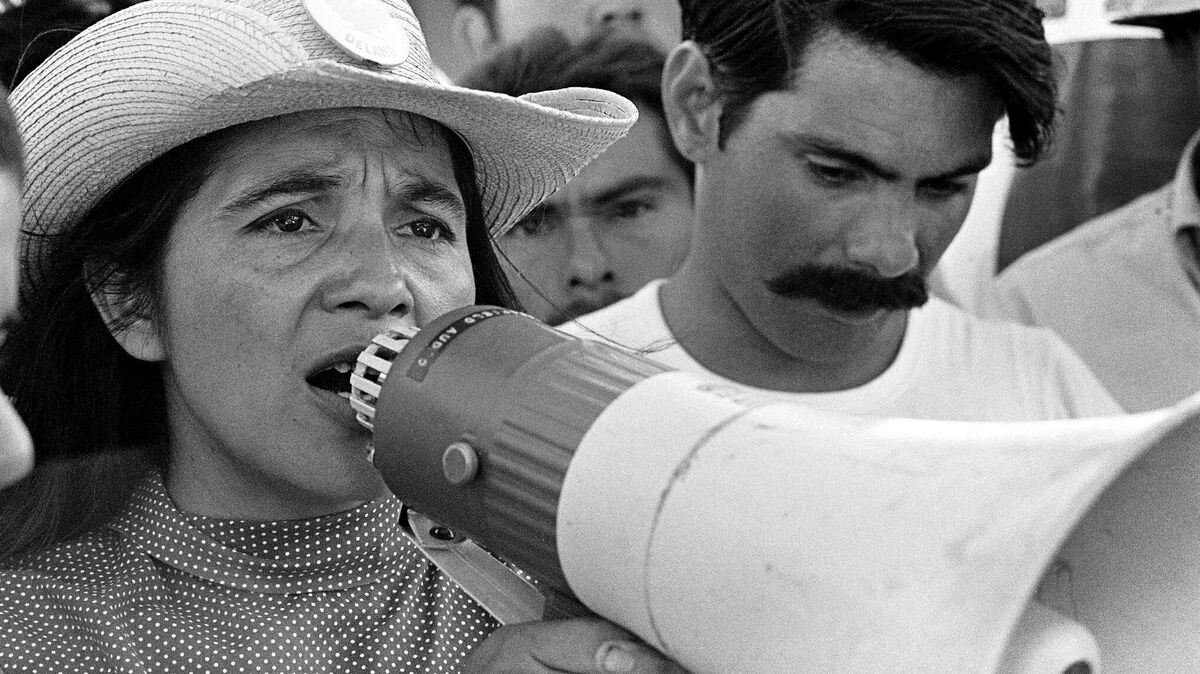 Huerta organizes marchers in Coachella, Calif., in 1969. She's been an outspoken activist for the rights of farmworkers and the downtrodden for much of her life.

As she approaches nine decades of life, Huerta remains outspoken and indefatigable. Through her Dolores Huerta Foundation, she continues to work with agricultural communities, organizing people to run for office and advocating on issues of health, education and economic development.

Huerta recently stopped by NPR headquarters in Washington, D.C., where she spoke to us about the new film, her life's work and her ongoing activism. Excerpts of our conversation are transcribed below, edited for brevity and clarity.

After the grape workers went on strike, you directed the national boycott of grapes. What kind of day-to-day conditions did farmworkers in the field face at that time?

Well, the conditions were terrible. The farmworkers were only earning about 70 cents an hour at that time — 90 cents was the highest wage that they were earning. They didn't have toilets in the fields, they didn't have cold drinking water. They didn't have rest periods. People worked from sunup to sundown. It was really atrocious. And families were so poor. I think that's one of the things that really infuriated me. When I saw people in their homes — they had dirt floors. And the furniture was orange crates and cardboard boxes. People were so incredibly poor and they were working so hard. And the children were [suffering from malnutrition] and very ill-clothed and ill-fed. I said, "This is wrong," because you saw how hard they were working, and yet they were not getting paid anything.

One thing that struck me while watching the documentary was the violence directed against farmworkers during the strike. Were you subjected to this violence?

Oh, many times. We had violence directed at us by the growers themselves, trying to run us down by cars, pointing rifles at us, spraying the people when they were on the picket line with sulfur. And then we had violence by the Teamsters union with the goons that they hired at that time — and by the way, I have to say that the Teamsters union are OK today. [Editor's note: In 1970, the Teamsters union signed a deal with growers for access to organize farmworkers, undercutting the efforts of the United Farm Workers.] They came at us with two by fours. We had a lot of violence, definitely. And then I was beaten up by the police San Francisco [in 1988], which also is shown in the film. [During that incident, several of her ribs were broken and her recovery took months.]

In the documentary, we hear a lot of moving testimony from your children. And they obviously have a great deal of respect and admiration for you. But they also talk about the toll that the work took on the family when they were growing up. Was that something that weighed on you — the fact that you were very much a pioneer, but the time that you spent on activism meant time away from your children?

I think that's something that all mothers have to deal with, especially single mothers. We work and we have to leave the kids behind. And I think that's one of the reasons that we, not only as women but as families, we have to advocate for early childhood education for all of our children. To make sure that they're taken care of but also educated in the process. Because we do need women in civic life. We do need women to run for office, to be in political office. We need a feminist to be at the table when decisions are being made so that the right decisions will be made. But you know, actually, in the farmworkers union — and the film doesn't really show this — we always had a daycare for children. Because when we did this strike, and especially when all of the people went on the march to Sacramento, the women had to take over the picket lines.

Because the men were marching to Sacramento?

Do you feel that women working in the fields faced special challenges when you were organizing?

Oh absolutely, especially on the issue of pesticides. Because you know, the pesticides in the fields really affect women even more than they do men. They affect children and they affect women more than they do men. But we have had so many women that have cancer, so many children have been born with deformities. And men also that have died because they were spraying pesticides in the field and they died of lung cancer. This is a really, really big issue to this day for farmworkers. Because even though we were able to get many of the pesticides banned, they keep inventing new ones. And it was actually just a couple of months ago that a group of farmworkers working in a field near Bakersfield were poisoned. And one of the pesticides that affected them was one that was recently taken off the restricted list by President Trump. [Editor's note: The Environmental Protection Agency, under President Obama, had concluded that the pesticide chlorpyrifos could pose a risk to consumers and proposed banning it. But a final decision was not made until March, when the Trump administration's EPA reversed course and said it would keep the pesticide on the market.]

One of things in the documentary that stayed with me is that you say that for a long time, you didn't think it was right to take credit for your work.

You know what? I've thought about that a lot. When we had our first constitutional convention for the National Farm Workers Association and we were having elections and Cesar [Chavez] was running the meeting, he stepped down from the dais and came up to me. He said, "Who's going to nominate you for vice president?" And I said, "Oh, I don't have to be on the board. I just want to serve all the women out there." How many of us have thought that way?

And he said, "You're crazy." So I did — I grabbed somebody to nominate me. But if Cesar hadn't told me to, I wouldn't have thought about it. And I think that's a problem with us as women — we don't think we need to be in the power structure, that we need to be on those boards where decisions are being made. Sometimes we think well, I'm not really prepared to take that position or that role. But I say [to women out there]: Just do it like the guys do it — pretend that you know. And then you learn on the job.

We were in Arizona. We were organizing people in the community to come to support us. They had passed a law in Arizona that if you said, "boycott," you could go to prison for six months. And if you said "strike," you could go to prison. So we were trying to organize against that law. And I was speaking to a group of professionals in Arizona, to see if they could support us. And they said, "Oh, here in Arizona you can't do any of that. In Arizona no se puede — no you can't." And I said, "No, in Arizona sí se puede!" And when I went back to our meeting that we had every night there ... I gave that report to everybody and when I said, "Sí se puede," everybody started shouting, "Sí se puede! Sí se puede!" And so that became the slogan of our campaign in Arizona and now is the slogan for the immigrant rights movement, you know, on posters. We can do it. I can do it. Sí se puede.

That must make you smile every time you hear it.

Oh, it does. I always feel very happy.