Accessibility links
Beans Add Healthy Fiber And Protein To Gluten-Free Pastas : The Salt Pastas made from starches like rice are a boon for those with celiac disease and wheat allergies. The downside: Many spike blood-sugar levels. What to do? Look toward bean-based options. 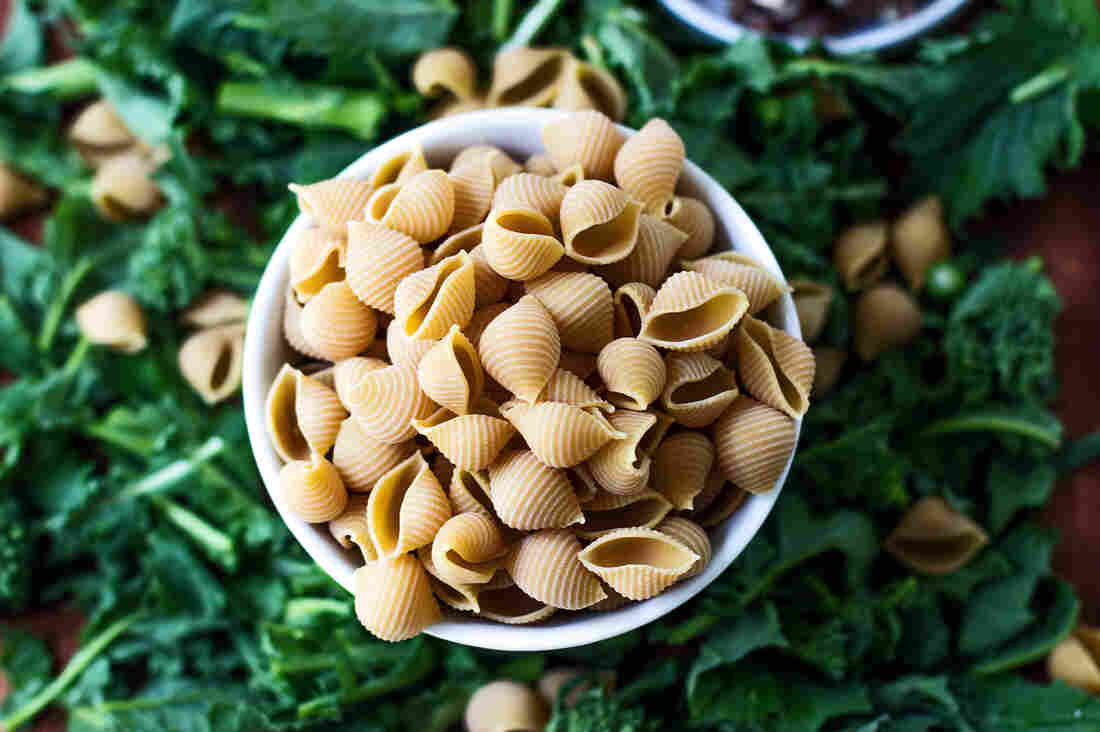 Not just for hummus — here chickpeas serve as the base for a delicious pasta. Courtesy of Banza hide caption 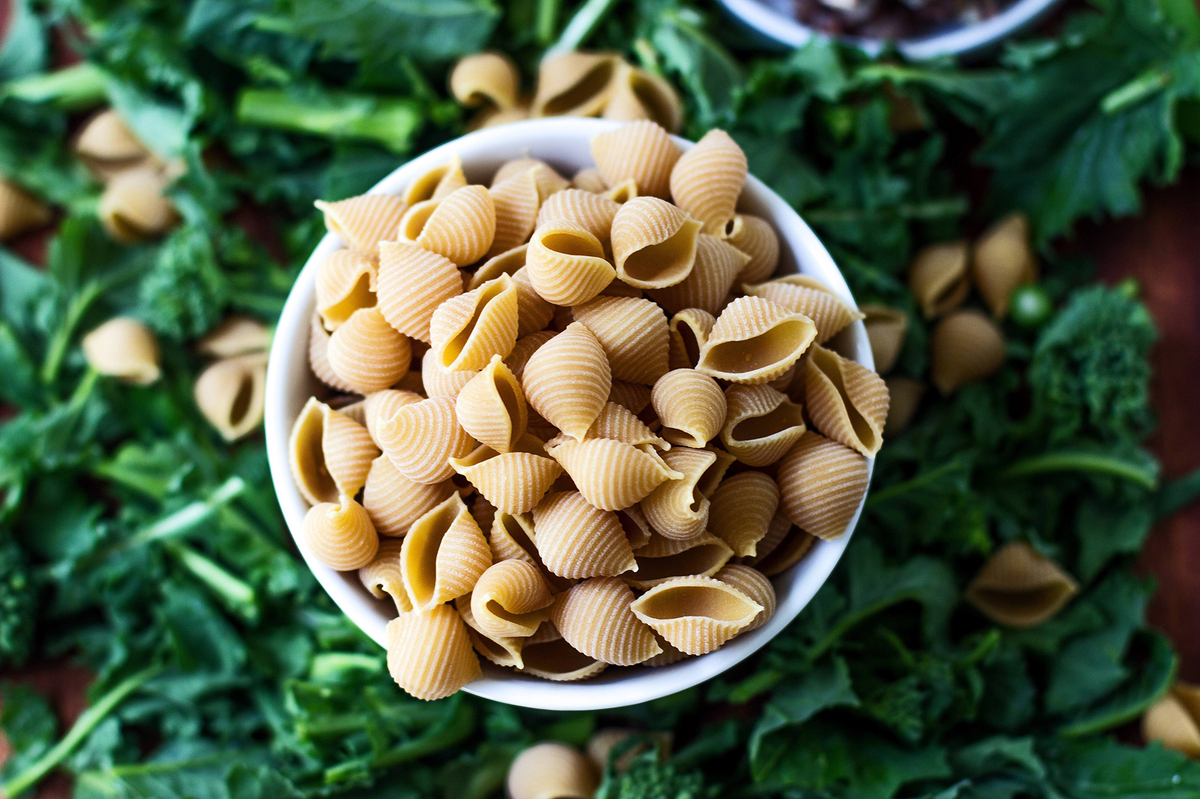 Not just for hummus — here chickpeas serve as the base for a delicious pasta.

Not long ago those of us suffering from celiac disease — an autoimmune illness triggered by the ingestion of gluten — could only look on longingly while our friends and family gorged on pasta, slurped up spaghetti, and blissed out over layers of cheese-and-sauce-soaked lasagna.

Then came the dawn of gluten-free food, including pastas often crafted of rice or corn. The problem seemed solved for all those who must avoid wheat — though substitutes never quite rivaled the slippery but chewy mouthfeel of pasta made from durum semolina wheat.

But now, new research suggests that gluten-free pasta might have a downside: It may increase the risk of diabetes or pre-diabetes. What is a wheat-avoiding pasta-lover to do?

Could bean-based pasta be the answer? Companies such as Tolerant, Banza, Ancient Harvest (with their POW! line), and Explore are producing high-protein, high-fiber products made from legumes such as orange and green lentils, black beans, and chickpeas. Surprisingly tasty, they offer a best-of-both-worlds choice, according to registered dietitian Linn Steward, owner of Gourmet Metrics in New York City. "Legume pastas are healthier than brown rice, corn or blended gluten-free pastas," she explains, "They are higher in protein and fiber." 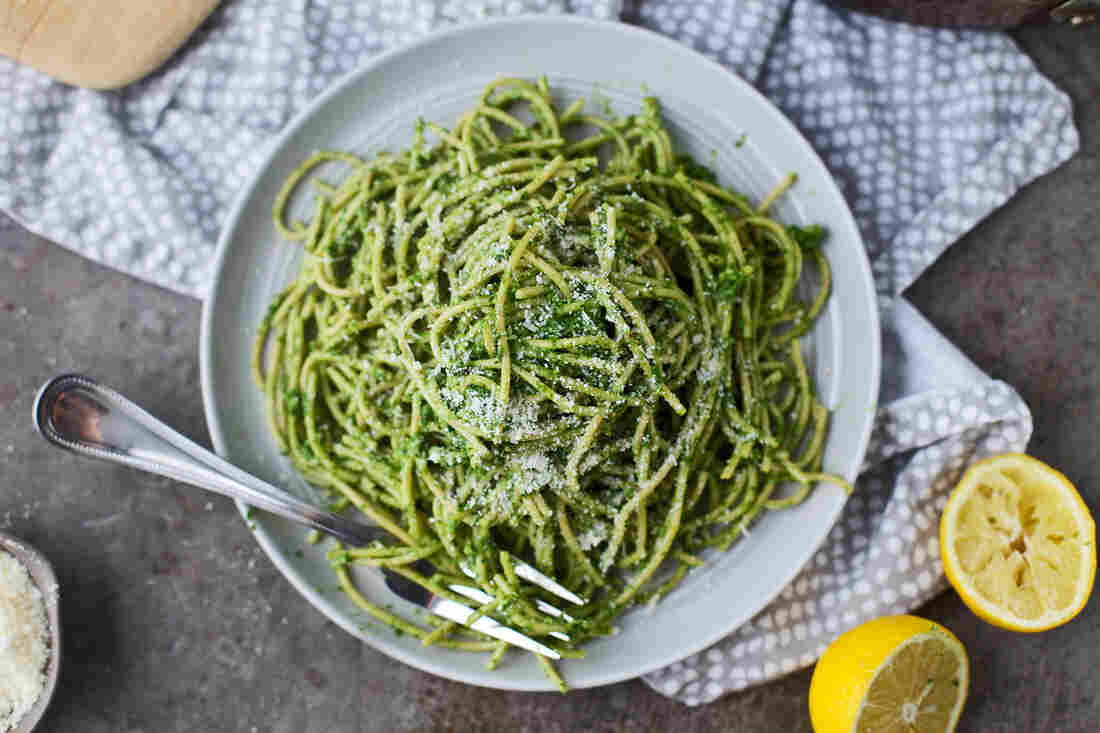 Some bean-based pastas mix in vegetables such as kale, caulilower and spinach. Courtesy of Banza hide caption 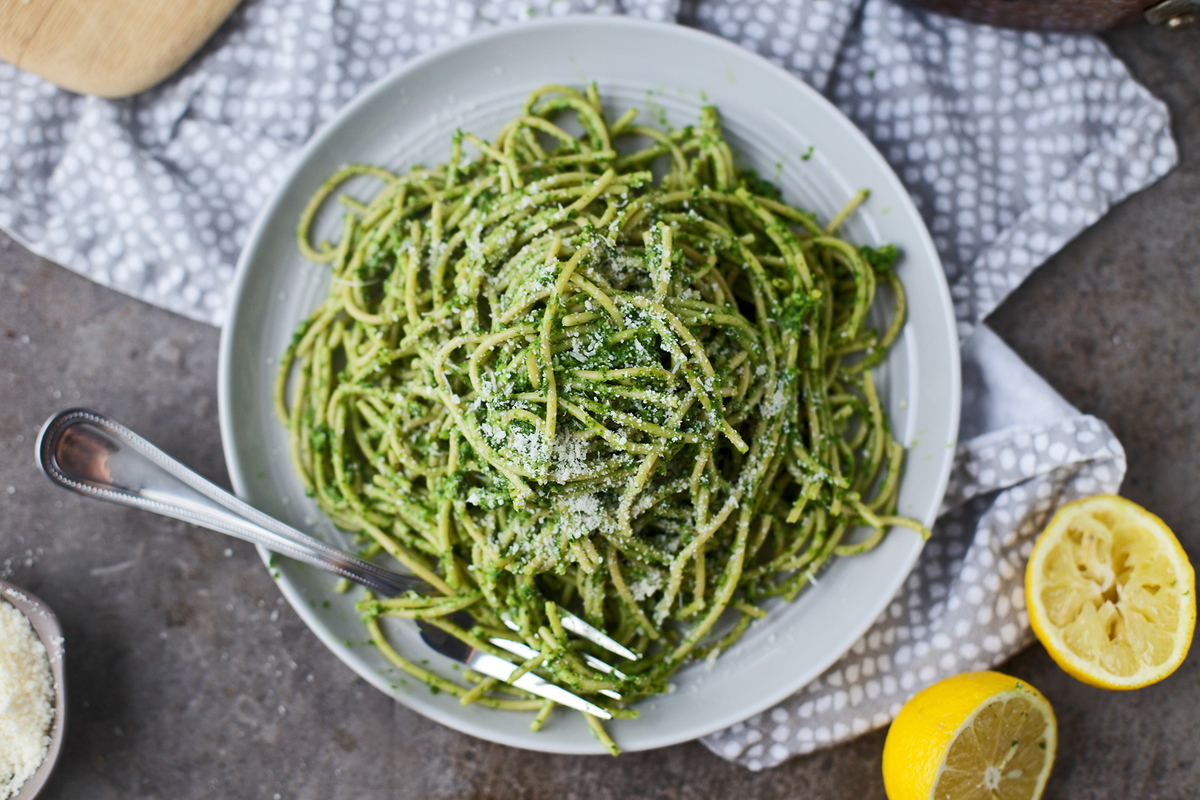 Some bean-based pastas mix in vegetables such as kale, caulilower and spinach.

Here's why rice or corn-based pastas may present a problem. They are often low in fiber and protein — and high in carbohydrates. Their glycemic index — a value assigned to foods based on how quickly or slowly they cause blood sugar to rise — can be high. In contrast, gluten itself is a protein, and wheat-based pasta made with semolina flour (made from durum wheat) "has a glycemic index of about 41," says Guy Crosby, a professor of nutrition at the Harvard School of Public Health. Any number below 50 is considered low, explains Crosby.

In general, those who eat more gluten have less of a chance of developing Type 2 diabetes, according to a 2017 study. Researchers examined the estimated daily gluten intake (from foods like pasta, bread, muffins, pretzels, pizza and cereal) for nearly 200,000 participants in three large, long-term studies. Those individuals in the highest 20 percent of gluten consumption had a 13 percent lower risk of developing Type 2 diabetes, in contrast to those with the lowest gluten consumption (under 4 grams a day).

Even more concerning, blood glucose levels can rise significantly after eating rice and corn pasta. A small pilot study tested blood glucose levels in 13 participants after they ate a macaroni and cheese meal prepared with one of four flours: wheat, brown rice, rice and corn, or corn and quinoa. The post-meal jump in blood glucose was 47 percent higher for the rice and corn pasta, compared with traditional wheat pasta. Corn and quinoa was 14 percent higher, and brown rice was 18 higher than wheat. "If you eat corn on the cob," explains the study's lead author, Arizona State University nutritionist Carol Johnston, "you get a lot of fiber. But corn flour has had most of the fiber removed, and so you will get a higher glycemic index." 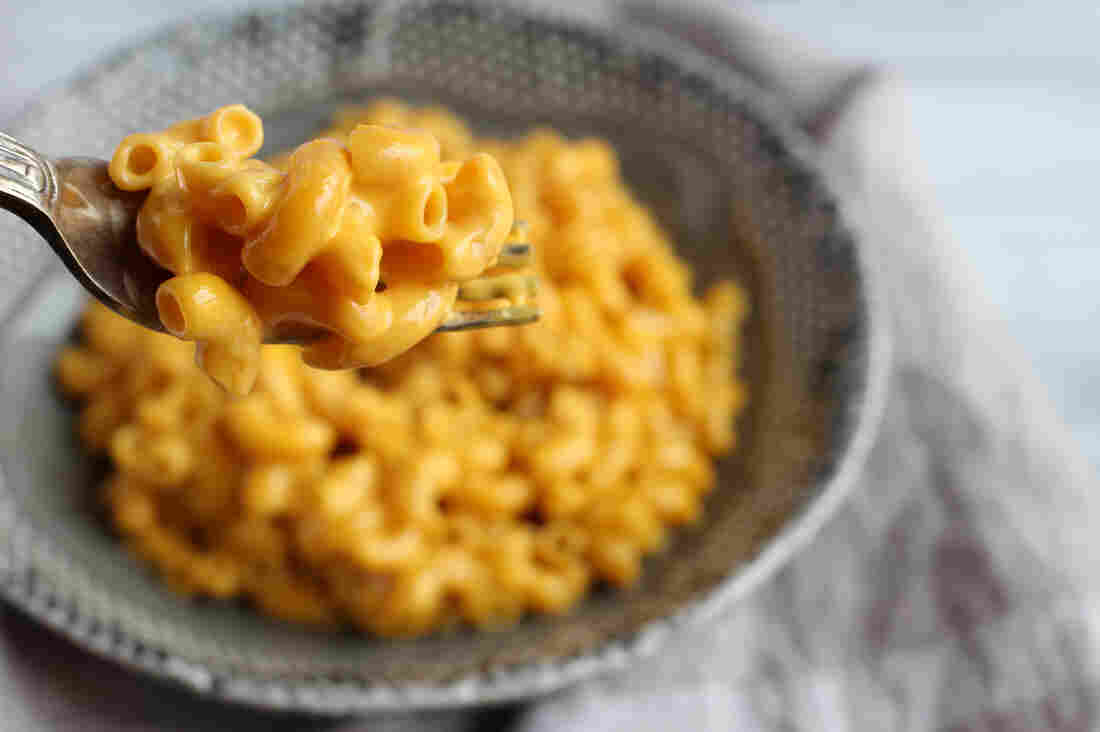 Chickpea mac and cheese: Chickpeas contain generous amounts of minerals like manganese and the essential B vitamin, folate. Courtesy of Banza hide caption 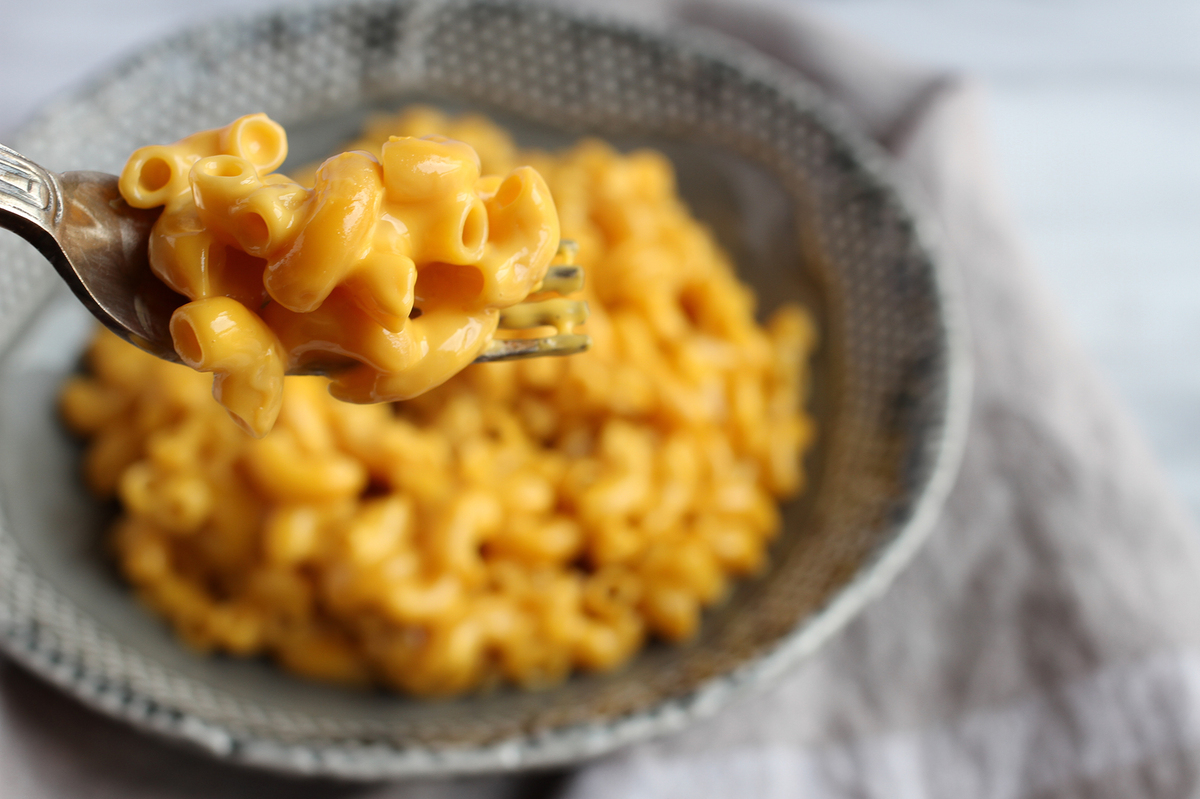 Chickpea mac and cheese: Chickpeas contain generous amounts of minerals like manganese and the essential B vitamin, folate.

Since most Americans consume about six servings of grain products a day, says Johnston, this difference can be substantial when swapping wheat for more refined carbohydrates.

Another benefit of pulse-based pastas is their resistant starch, which does not get digested in the stomach or small intestine. Like soluble and insoluble fiber, it is digested by the bacteria in our large intestine. "Legumes are 20-30 percent resistant starch by weight," explains Linn Steward.

Beans have more resistant starch than any other food, even when cooked. That high amount of starch, along with the fiber and protein in beans, slows down digestion of the carbohydrates and lowers the glycemic index. Guy Crosby explains that like soluble fiber, resistant starch is readily metabolized by bacteria in our large intestine, which convert it into small molecules called short-chain fatty acids (SCFA). The cells lining the colon obtain about 60-70 percent of their energy from SCFA. In other words, resistant starch helps keep our colons healthy.

"Fiber, along with resistant starch, does not have an impact on blood glucose and insulin production," explains Crosby, "and in that way is also very beneficial." The extra fiber and starch also help us feel sated sooner and fuller longer.

Finally, along with a healthy amount of fiber and resistant starch, legumes contain about 20-25 percent protein by dry weight, about two to three times more than wheat and rice.

So pick up the pulse — whether it's red lentil rotini or green lentil penne, black bean elbows or chick pea fusilli. Even if you love wheat pasta, these bean-based offerings can be a nice addition.