Accessibility links
Gassy Cows Warm The Planet. Scientists Think They Know How To Squelch Those Belches : The Salt Researchers have won a prize for discovering that a cow's genetics determine which microbes populate its gut. Some of those microbes produce the greenhouse gas methane that ends up in the atmosphere. 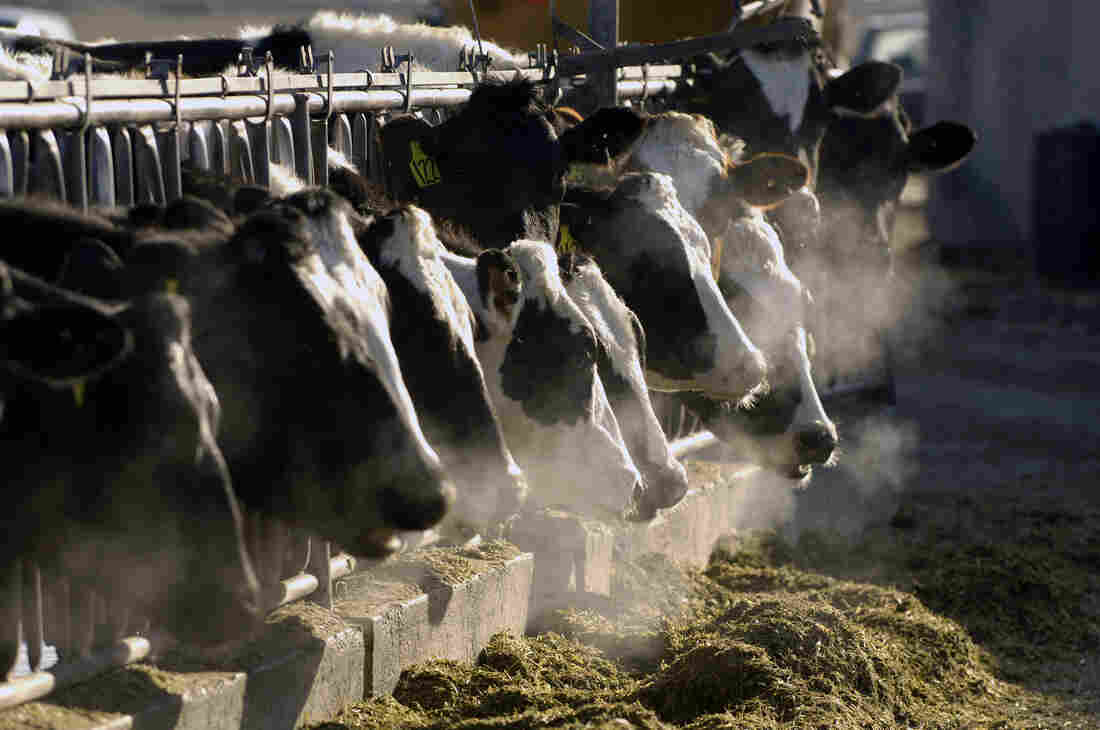 Researchers have won a prize for discovering that a cow's genetics determine which microbes populate its gut. Some of those microbes produce the greenhouse gas methane that comes out of cow belches and farts and ends up in the atmosphere. Charlie Litchfield/AP hide caption 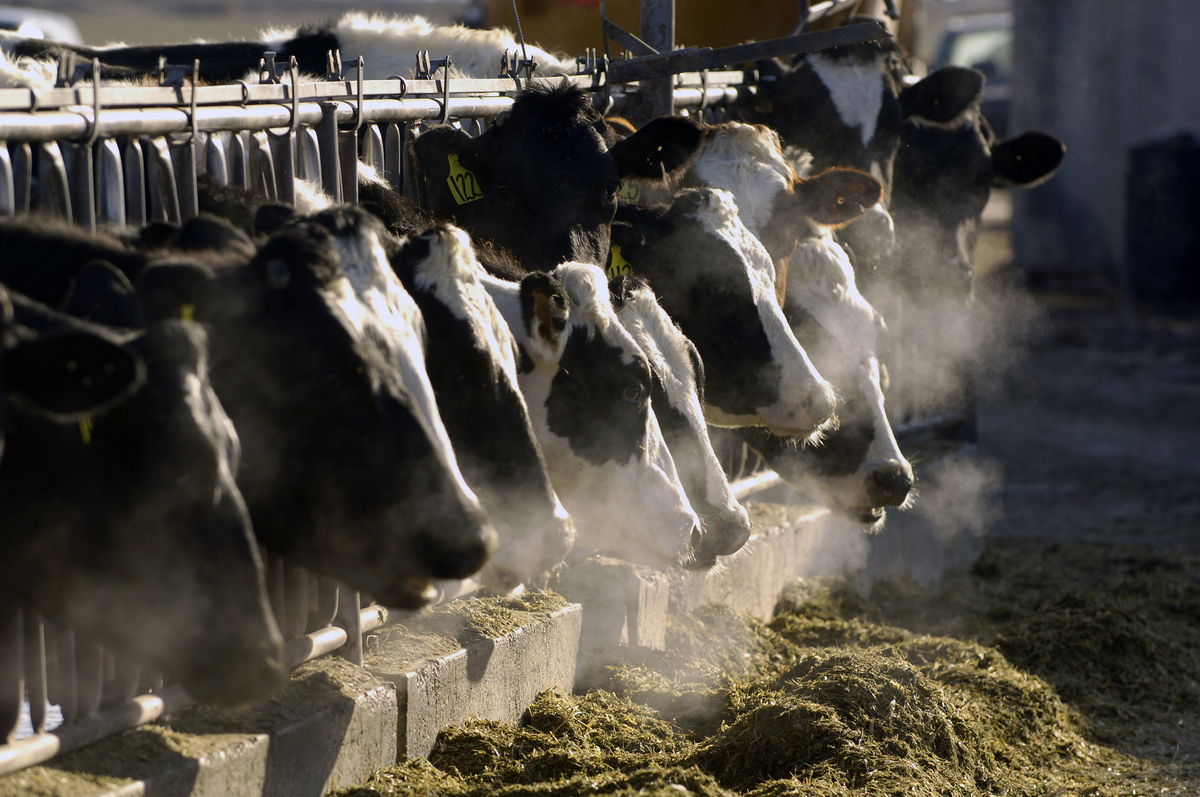 Researchers have won a prize for discovering that a cow's genetics determine which microbes populate its gut. Some of those microbes produce the greenhouse gas methane that comes out of cow belches and farts and ends up in the atmosphere.

Cattle pass a lot of gas, and the methane from their flatulence and especially, their belches, is an expanding burden on the planet. The greenhouse gas has a warming potential 25 times that of carbon dioxide.

Livestock account for 14.5 percent of all greenhouse gas emissions, with over half of that coming from cattle, according to a 2013 report from the United Nations' Food and Agriculture Organization. Given that, some environmentalists might choose to eschew milk and beef, but scientists think they've figured out a way for us to one day have our cattle and eat them, too — gas-free.

The key is breeding less-gassy cattle, and scientists now know it's possible because of a study that won the Public Library of Science Genetics Award on Thursday. The study, originally published in the journal PLoS Genetics last year, showed that a cow's genetics determine which microbes populate its gut — and some of those microbes produce the methane that eventually makes its way into the atmosphere.

"The cow genetics will dictate which bacteria they will have in their own stomach," says Filippo Miglior, a geneticist at Canadian Dairy Network and the University of Guelph, who did not work on the study. "[The research team] proved that."

The researchers divided 72 cows into nine groups. Each group consisted of siblings — cows similar to each other in their genetic makeup. Half of the cows in every group got one diet, and the other half got a different diet. To measure how much methane they were emitting, the researchers shut each cow in a chamber to suck up its gasses coming.

It turned out that the different groups differed in the amounts of methane they emitted — by a lot. "The highest [group emitted] 200 grams per day, and the lowest [group's] methane emission was at 140 grams per day. So there is a large difference," says Rainer Roehe, the lead author on the study and a geneticist at Scotland's Rural College.

Roehe says the different diets made a difference in how much methane the cows emitted, but when they ranked the cow families based on how much gas they were expelling, the least gassy family emitted the least methane no matter what they ate. On the flipside, the cows in the family that gave off the most gas were still the biggest offenders regardless of what they were eating. Roehe says that suggests genetics is playing a big role in shaping which microbes exist in any individual cow's gut and is the reason why some cows belch and fart less than others.

"It's very exciting because we did not know that the microbial community is so heavily influenced by the host genetics," he says. "This gives an opportunity to select animals based on those genetics and thus reduce methane emissions."

But it won't be that easy to do, says Migilor. Putting cows into a chamber that analyzes their outgassing is extremely expensive. "To measure methane emissions, it can cost $700 to $1,000 per cow," Miglior says. That's a lot of money for a breeder to blow through just looking for an environmentally friendly stud. But Roehe and his team think they have a solution for that, too.

The researchers took microbial samples straight out of each cows' guts. When they analyzed the samples, Roehe and his colleagues found 20 microbial genes that give bacteria the ability to produce methane. The abundance of those genes in a cow's gut correlated strongly with how much methane the cow actually gave off.

"[These genes] can be used very well to predict methane emissions, and we can use this for breeding purposes," Roehe says.

Simply doing a genetic analysis on a cow's gut would be far cheaper than directly measuring methane emissions, Migloir adds.

That means breeding programs might be able to start looking for cows with less gas en masse. Breeders could get a gut microbial profile on a herd of cattle and identify the ones that would produce the least methane. Those could then be used to breed the next generation of cattle. Eventually, it's possible that breeders might even be able to breed out methane-producing bacteria from cattle altogether.

"There are studies [where researchers] had animals without methane-producing bacteria, and we had no disadvantage in growth and health and so on," Roehe says.

But gasless cows are probably still quite a way off, if breeders get there at all. For one, Miglior says he's not ready to switch to using the genetic proxy measure for breeding cattle.

"The [method] has to be validated first, obviously, but it's very promising research," he says. "For sure, it deserves the prize."