Accessibility links
Discount Grocers Aldi And Lidl Give U.S. Stores A Run For Their Money : The Salt The grocery industry is in an intense price war. Two German competitors — Aldi and Lidl — are a major driving force. They're known for very low prices, and they're planning scores of new U.S. stores. 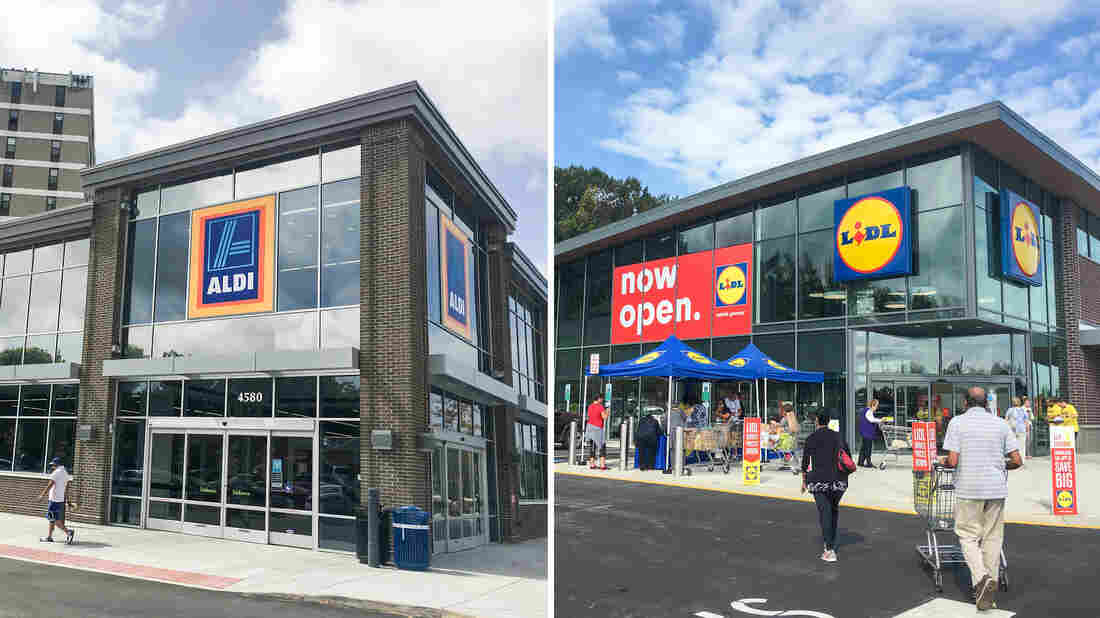 German grocers Aldi and Lidl are aggressively growing their U.S. footprint. Aldi, which aims to have 2,500 stores by 2022, has recently renovated this store (left) in Alexandria, Va. And Lidl's new location in Manassas, Va., was its 30th in the country. Alina Selyukh/NPR hide caption German grocers Aldi and Lidl are aggressively growing their U.S. footprint. Aldi, which aims to have 2,500 stores by 2022, has recently renovated this store (left) in Alexandria, Va. And Lidl's new location in Manassas, Va., was its 30th in the country.

It's 6:30 a.m. on a Thursday in September, about an hour until the grand opening of a Lidl grocery store in Manassas, Va. A small line is queued along a squat building — at first glance, maybe a car dealership, if it were designed by Ikea. A few people at the front of the line shake their heads when asked whether they'd heard of a Lidl — pronounced"Lee-dle" — before this one arrived. It's the German newcomer's 30th U.S. location.

Rose and Roy Spilman camped overnight to be the first customers. Or, rather, Rose sat in line while Roy slept in the car — this is very much Rose's thing. "She's professional," says third in line Melissa Johnson. "Her Krispy Kreme story is epic." Last year, Rose spent three days staking out a spot to win a free year's supply of doughnuts for her children and grandchildren.

Johnson and Spilman had met before; naturally, in another line to another grocery store: It was the grand reopening of a local Aldi, Lidl's compatriot and main rival, and the two women's favorite place to shop.

Aldi and Lidl, in industry speak, are called deep discounters. They offer a limited assortment at very low prices — think large eggs on sale for 49 cents a dozen — keeping costs down with a mix of tactics for efficiency. If the U.S. grocery industry is in the middle of a price war, Aldi and Lidl are on the front line. 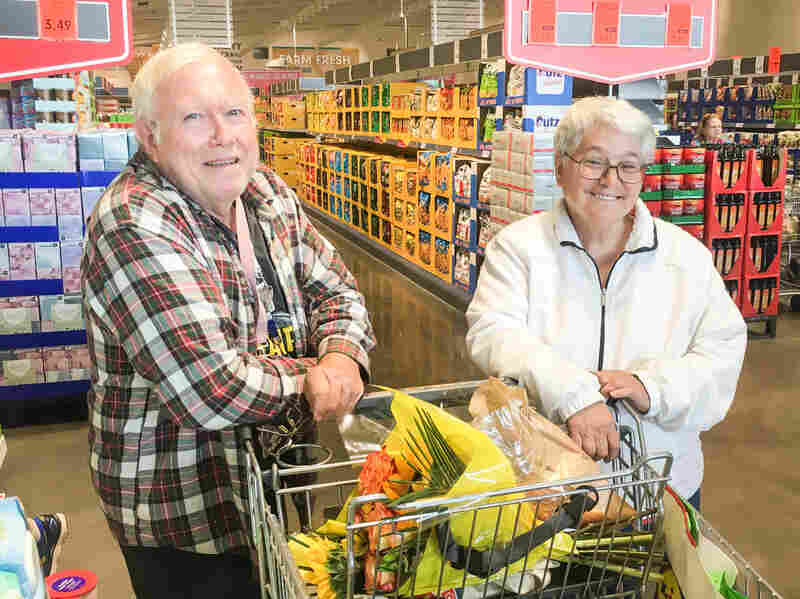 Roy and Rose Spilman camped overnight to be the first customers at a new Lidl store in Manassas, Va. Alina Selyukh/NPR hide caption 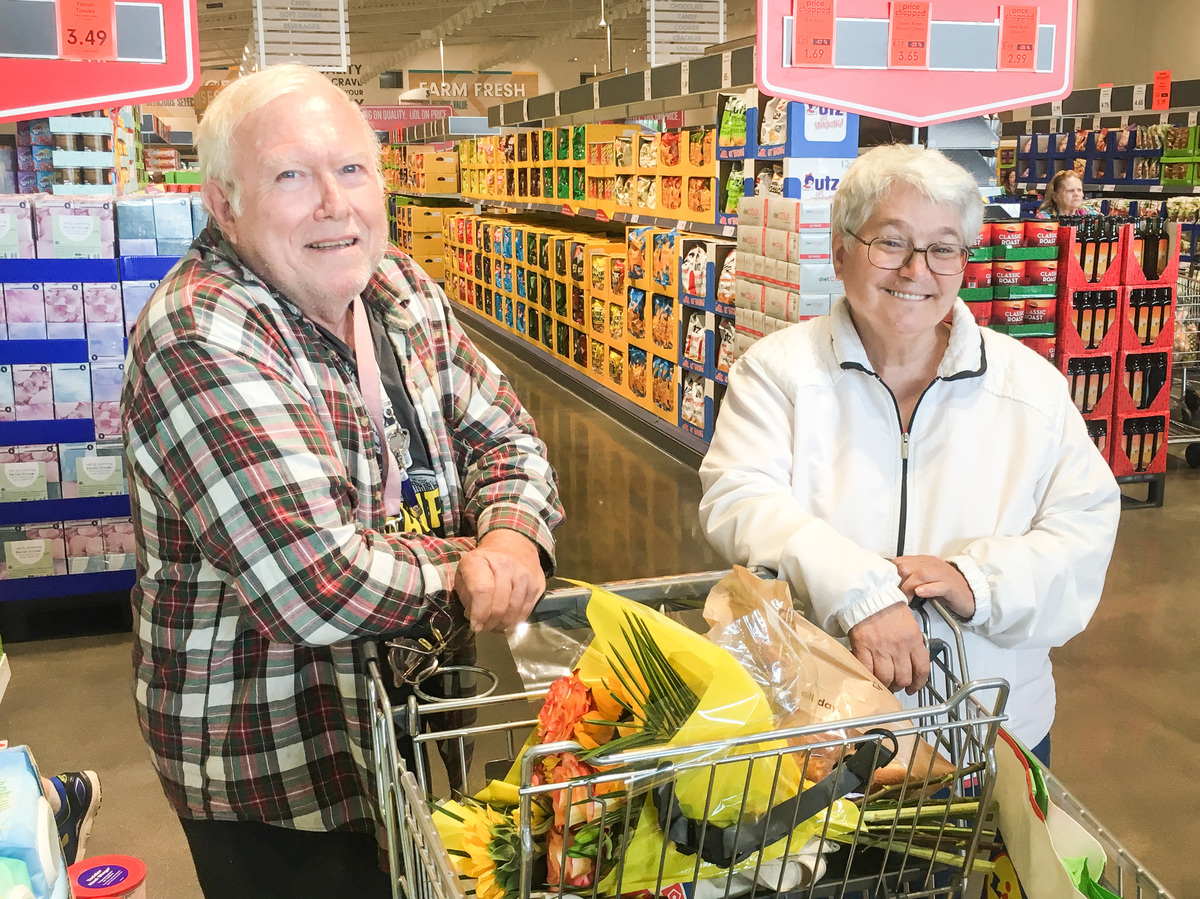 Roy and Rose Spilman camped overnight to be the first customers at a new Lidl store in Manassas, Va.

Competition has been intense among U.S. grocers. Companies are trying to figure out the role of technology in our shopping habits, and Amazon is ever the elephant in the room, now in possession of Whole Foods. And the pressure to compete on price is always there. In fact, prices have been falling quite a bit. Analysts often cite two major factors: a long period of food deflation, and stepped-up competition from Aldi and Lidl.

Aldi is an old-timer that's been in the U.S. since the 1970s, approaching 1,700 stores. The company has now pledged $5 billion to renovate existing stores and grow to a total of 2,500 locations by 2022 — which would make it second only to Walmart and Kroger.

Lidl began spreading along the East Coast in June, reaching 30 storefronts in mid-September. It aims for a total of 100 by mid-2018 — presumably expanding further, if at a slower pace, after that.

I think right now, the key for us is, consumers are appreciating more and more private label.

Both stores are known particularly for private-brand, or store-label, products. Jim Hertel, senior vice president at food retail consultancy Inmar Willard Bishop Analytics, says that allows these grocers to offer customers savings of about 35-40 percent compared with other supermarkets. A limited stock goes into these discount stores, which are very compact and value efficiency above frills.

Some industry watchers predict that over the next few years, the deep-discount-grocery business will grow five times faster than traditional stores — in part because Americans are becoming more comfortable with private-brand groceries.

"We have been involved in being a low-price leader since Day 1," says Scott Patton, vice president of corporate buying at Aldi. "Because of the way we structure our business ... we are comfortable that we will come out as a leader in the price war. The market will ultimately decide how long it can go" down in price. 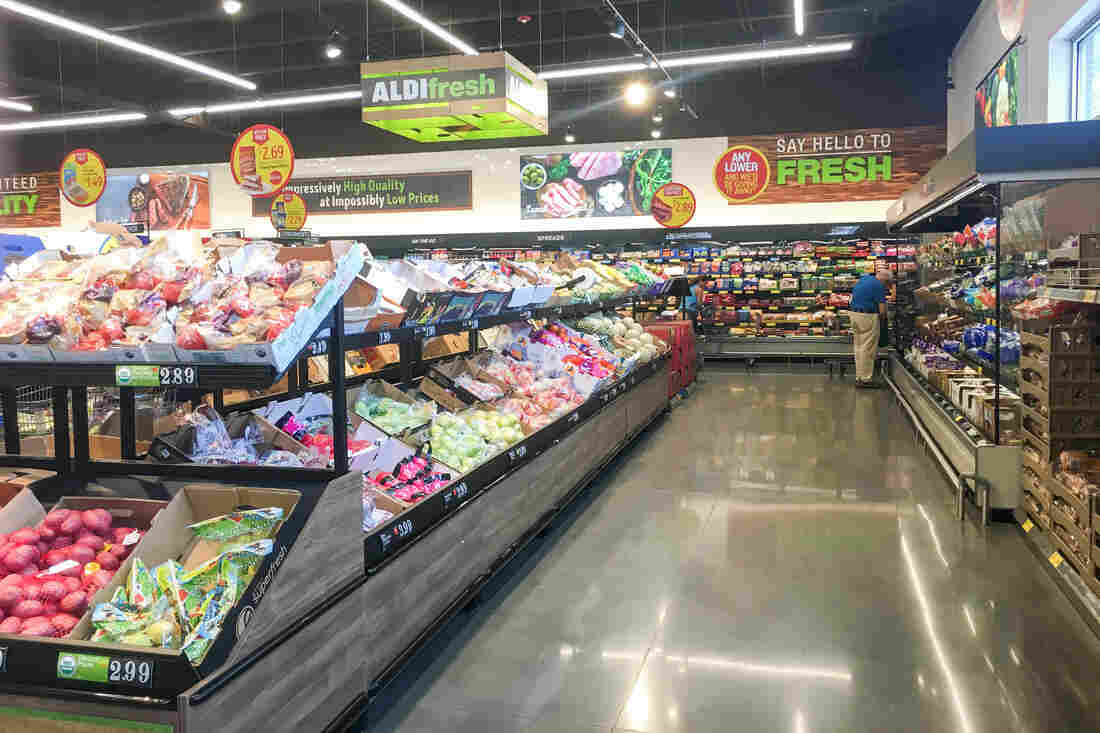 Aldi, which has been in the U.S. since the 1970s, has been updating its look and product selection, adding more fresh produce, among other things. Alina Selyukh/NPR hide caption 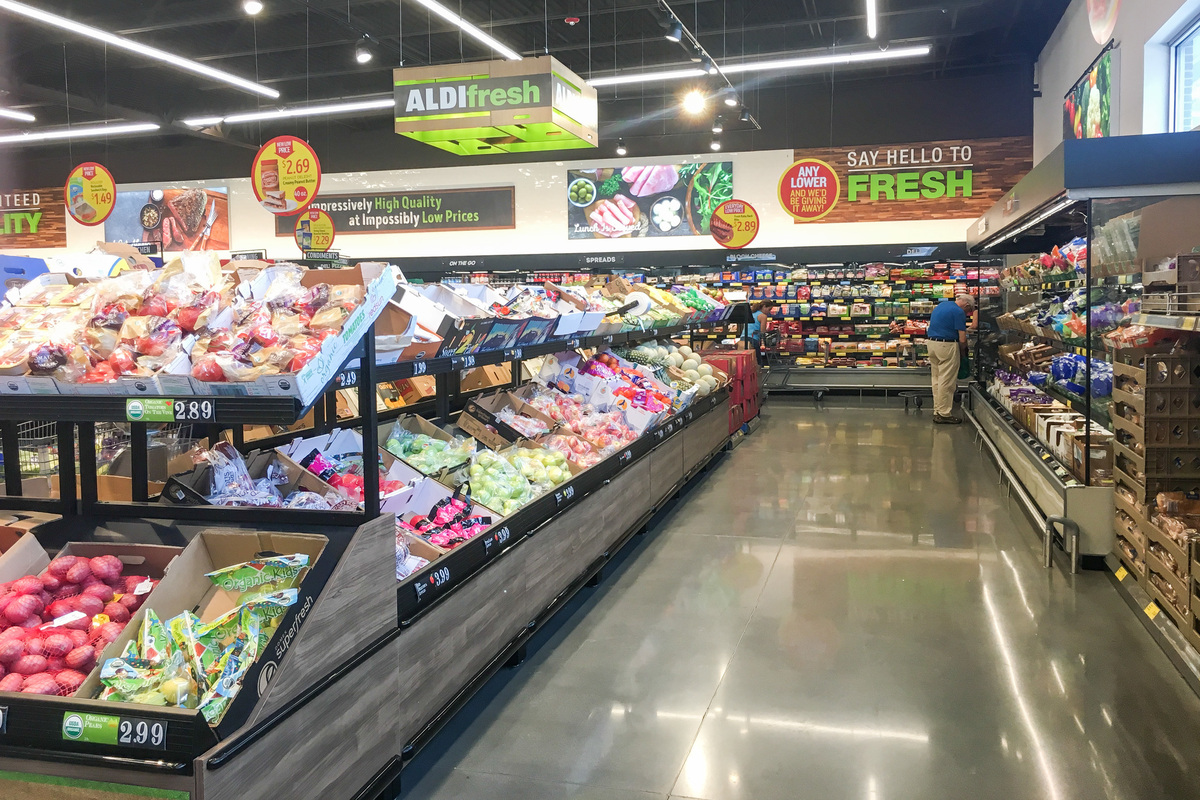 Aldi, which has been in the U.S. since the 1970s, has been updating its look and product selection, adding more fresh produce, among other things.

Inside the brand-new Lidl in Virginia, the Spilmans slowly fill up their cart: several fresh pineapples at 89 cents a pop; high-pulp orange juice for less than $2. Roy offers up some strawberries for $1.89, but Rose is eagle-eyed: "Aldi's was $1.77."

She picks up an unexpected find: a cheap stepstool from the "Lidl Surprises" section. "It was something I was going to build for her, but haven't gotten around to it," Roy says, with a sly thumbs-up.

Meanwhile, Johnson emerges at the checkout with an almost empty cart. She says she enjoyed being in the Lidl — "Aldi is a bit more factoryesque" — but she wasn't fully sold on the price comparison to her favorite store. More important, she has a houseful of kids for whom the Lidl brand is untested. "I'll be back, though," she says. "I'll bring my crew — I'll let them decide."

Grocery Prices Have Been Falling. Did You Notice?

Both German chains feature compact stores — Aldis, for example, are around 12,000 square feet on average — staffed by a few employees at a time.

"Typically, in a grocery store you'd often find 25, 26, 27 aisles. In Lidl, what we do here is just six aisles," says Lidl spokesman Will Harwood, walking past the fruit and vegetables toward meats, cheeses and dairy. "By the time a customer reaches the end of the first aisle, they're going to typically be able to do about 80 percent of their shop."

This design is one of many tactics that keep the store efficient and prices down. Both Aldi and Lidl also display items straight in their pallets or boxes, saving employees the time that would go into unpacking and constantly reshuffling individual items on shelves. Getting a shopping cart at Aldi requires a 25-cent deposit, to be reclaimed when the cart is returned. This spares the store's workers the effort of chasing down strays.

The appeal of limited selection

But the key factor that lets Aldi and Lidl cut costs is a limited assortment. Where a big supermarket would offer a dozen or more options of, say, pickles, Aldi or Lidl might have one or two varieties, only in the most popular size — but those would turn over in massive quantities. And this huge sales volume of one thing allows the stores to negotiate a good deal with the supplier. 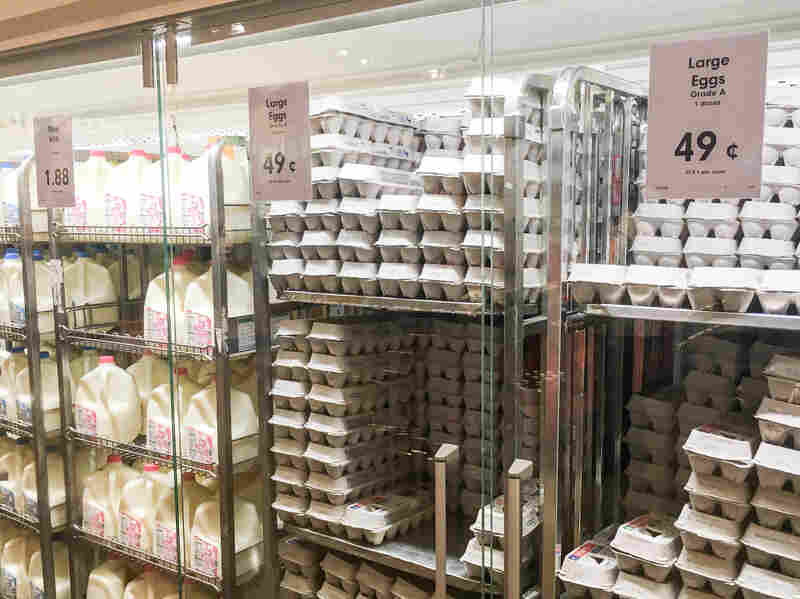 Eggs for sale for 49 cents a dozen at the new Lidl store in Manassas, Va. A newcomer to the U.S., Lidl uses a mix of cost-cutting tactics to keep prices low. Alina Selyukh/NPR hide caption 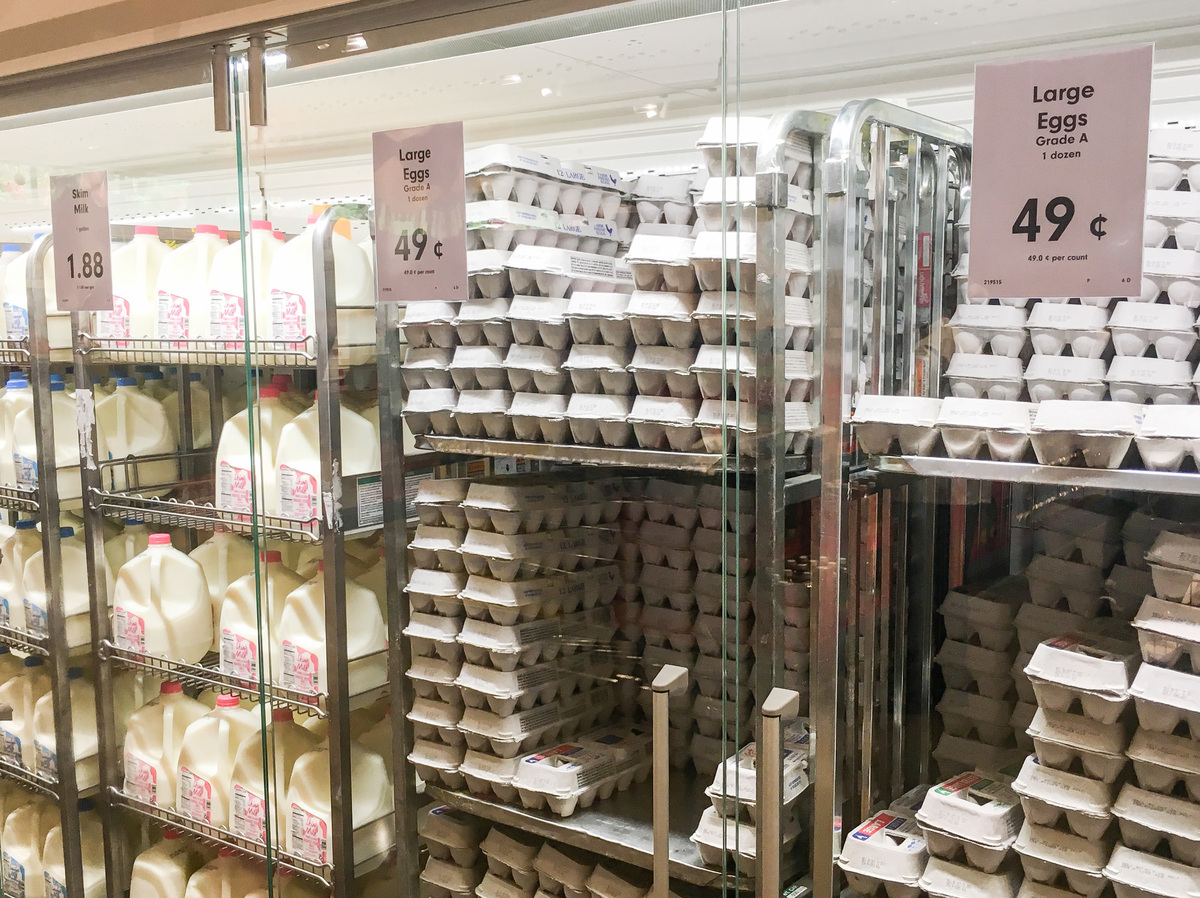 Eggs for sale for 49 cents a dozen at the new Lidl store in Manassas, Va. A newcomer to the U.S., Lidl uses a mix of cost-cutting tactics to keep prices low.

"I think right now, the key for us is, consumers are appreciating more and more private label," says Aldi's Patton. "They're absolutely recognizing they can get great quality product at a great price."

Of course, with prices so low, some consumers are bound to be suspicious about the quality of food for sale. Both German chains are working to win over shoppers by expanding their selection of items like fresh produce, Black Angus beef, and organic choices.

Hertel says there's a common misconception that Aldi stores are geared toward low-income shoppers on very limited food budgets. "It's really a combination," he says. "Certainly, the extreme value does ... appeal to the lower end of the economic scale, but actually the bulk of their sales come from mid- to maybe just above middle-class households."

And Aldi's Patton points out that his stores are in all types of markets, urban and suburban.