Accessibility links
The Rolled Oyster, Louisville's Oddball Bar Snack, Is Tumbling Off Menus : The Salt The softball-size, deep-fried morsels, which have been offered in this Kentucky city's restaurants for more than a century, are taking a hit due to low supply and high costs in the oyster industry. 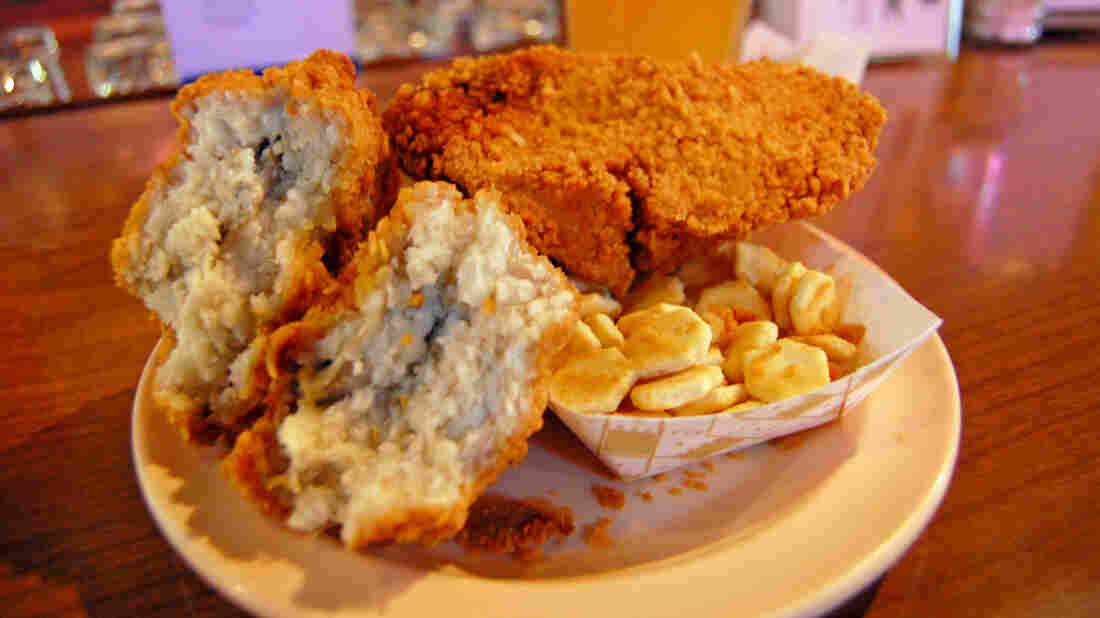 Rolled oysters have been a favorite snack in Louisville, Ky., restaurants for more than a century, but turmoil in the oyster industry has caused them to dwindle. Wikipedia/Southern Foodways Alliance hide caption 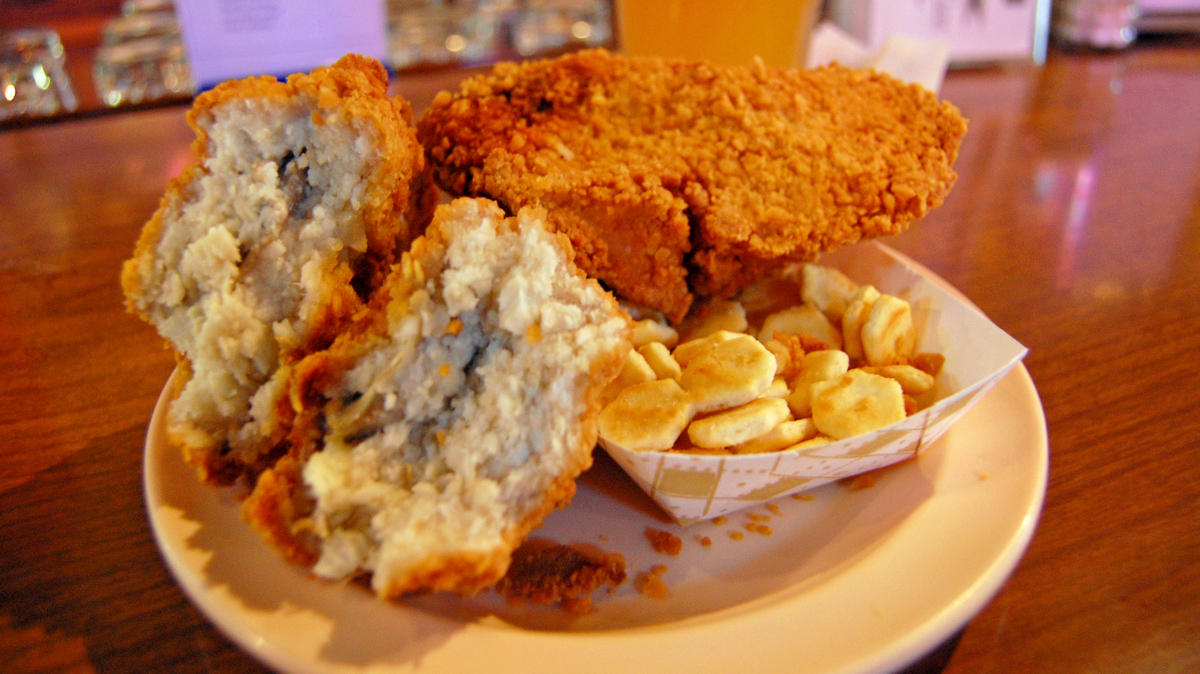 Rolled oysters have been a favorite snack in Louisville, Ky., restaurants for more than a century, but turmoil in the oyster industry has caused them to dwindle.

About two weeks ago, I went to the Silver Dollar — a bar and restaurant in Louisville, Ky. Without even looking at the menu, I asked for my usual — a basket of rolled oysters — only to find they'd been taken off the menu.

This discovery led me into the murky blue depths of the national oyster economy — and how it impacts the survival of an unlikely Louisville favorite.

"They were not priced out as well as they should have been," says Erica Goins, a chef at Silver Dollar. "The pricing on the menu should have maybe been adjusted as our prices were increasing, but I think that they kind of wanted to keep them at the point they were to keep them available to people."

Rolled oysters are historically a bar snack made by taking one or two small Chesapeake oysters and rolling them in a thick cornmeal or cracker crust. Once deep-fried, they are about the size of a softball, with more coating than actual oyster.

But as the price of oysters has risen, chefs like Goins struggle with charging entrée-level prices for this simple snack.

"There was almost no profit margin," she says.

Rolled oysters are an unusual local favorite in the sense that while they've been in Louisville restaurants for more than a century, there's nothing particularly "local" about the main ingredient.

But in the 19th century, thanks to new technology like steamboats and railways, oysters made their way from the East Coast across the U.S.

"Louisville was sort of a central point, and when it was arranged, oysters could travel by railroad," says Stephen Hacker, author of Forgotten Restaurants of Louisville.

Oysters, he says, were very popular in Louisville, and chefs began experimenting — chefs like Italian immigrant Phillip Mazzoni. Regional lore has it that Mazzoni first served rolled oysters in the late 19th century as a free bar snack for saloon patrons who bought a beer or whiskey.

Greg Haner, who was the last in a long line of descendants who owned Mazzoni's, says the dish is distinct from other fried oyster varieties in that it doesn't maintain the texture of an oyster.

"Basically, you've encased this oyster in cracker meal, fried it, they burst and the inside of the morsel is just gooey goodness," Haner says. "So people will say, 'There's no oyster in here!' but that just means that it's perfect."

He says it's an acquired taste, but it's one that helped keep Mazzoni's profitable until 2008, when both the recession and surging oyster prices ultimately caused the restaurant to shutter.

And according to Don Webster, a regional aquaculture specialist with the University of Maryland extension, oyster prices have only continued to rise since then.

"In the Chesapeake and the mid-Atlantic, we had a couple of diseases that moved in that affected oysters," Webster says. "That dropped the harvest down now from what was about a 2.5 million bushel harvest — now we're about 10 percent of that."

That loss of supply has driven the cost up.

Last year, oysters were $40-$45 a bushel — which, when you factor in additional transportation costs and processing, explains why local restaurants' profits on the dish are dipping. While a diner might drop $2 on a raw oyster, the humble fried rolled oyster doesn't command the same prices.

But, Webster says, with new conservation efforts and an increase in domestic aquaculture, he hopes within the decade oyster prices will settle.

And then, Louisville's unique snack might be back in area bars again — for good this time.