Accessibility links
'What The Fluff?' Celebrates A Century Of Peanut Butter's Marshmallow Friend : The Salt The people of Massachusetts celebrated the centennial in sticky style with a festival — including thousands of Fluffernutter sandwiches — in the neighborhood where Fluff was first whipped up.

'What The Fluff?' Celebrates A Century Of Peanut Butter's Marshmallow Friend

'What The Fluff?' Celebrates A Century Of Peanut Butter's Marshmallow Friend 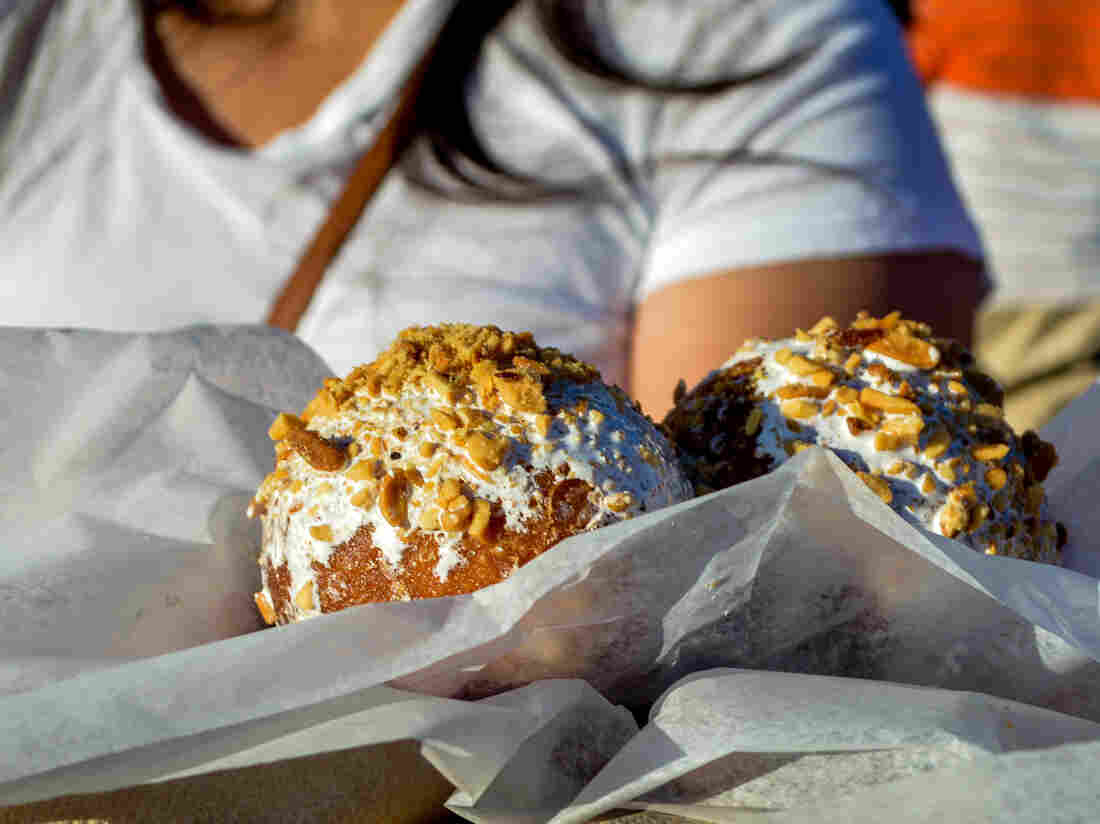 Fans enjoy a tasty treat made with Fluff at the 12th annual What the Fluff? festival in Somerville, Mass., on Sept. 23. The festival celebrates the 100th anniversary of Fluff, invented in Somerville in 1917 by Archibald Query. Carolyn Beans/Carolyn Beans hide caption 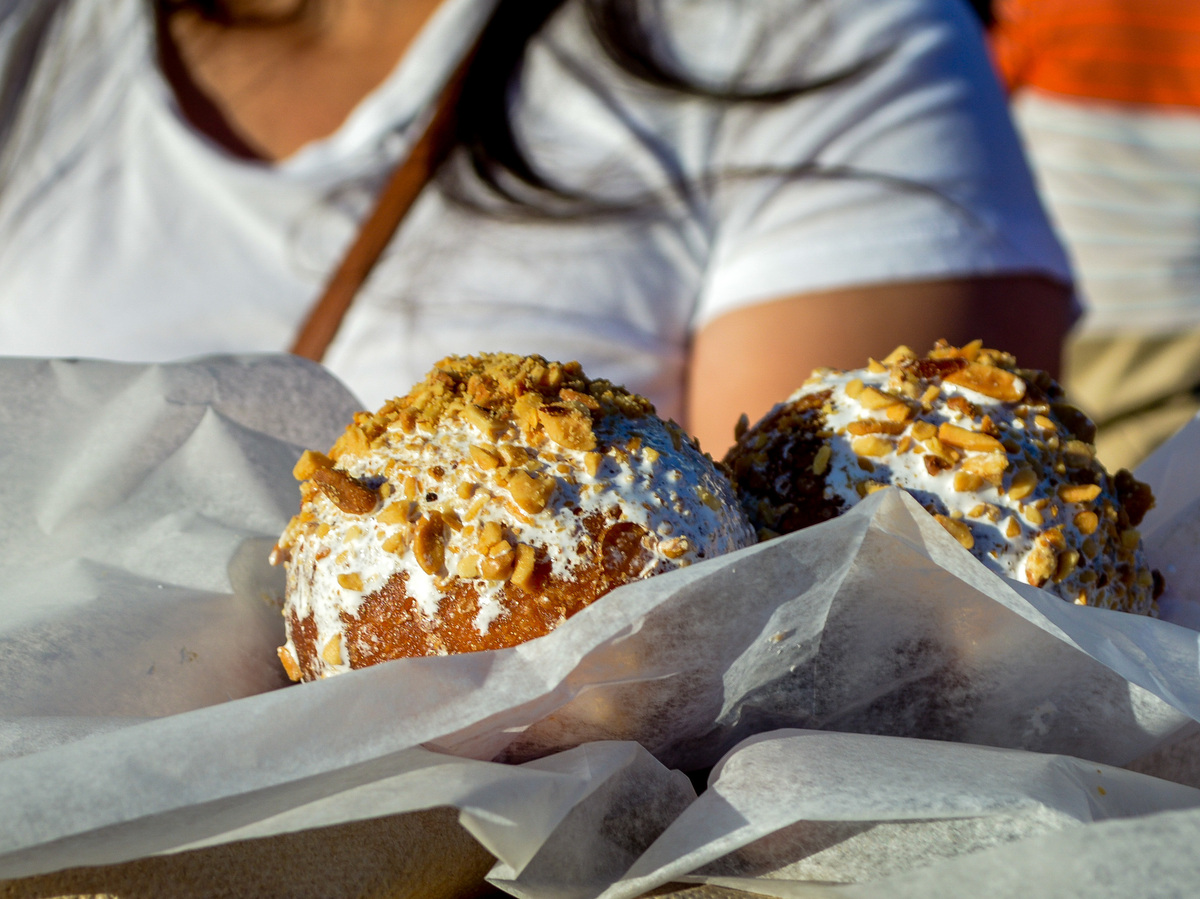 Fans enjoy a tasty treat made with Fluff at the 12th annual What the Fluff? festival in Somerville, Mass., on Sept. 23. The festival celebrates the 100th anniversary of Fluff, invented in Somerville in 1917 by Archibald Query.

An estimated 20,000 Fluff fans celebrated the centennial in sticky style last Saturday, in the New England neighborhood where the confection was first concocted — Union Square in Somerville, Mass., just outside of Boston.

If you happen to have led a Fluff-free childhood, here's an intro: Fluff is a marshmallow cream made from corn syrup, sugar syrup, dried egg whites and vanillin. So yeah, it's basically sugar — ooey, gooey, creamy sugar. It's most famous for its key role in the "Fluffernutter," a lunchbox favorite consisting of peanut butter and Fluff slathered between bread.

But at the 12th annual Fluff Fest (this flurry of Fluff fandom actually happens every year), people put the confection to less conventional use. People sipped the traditional Mexican rice-based beverage horchata topped with Fluff. Children moved pompoms across a stage using only their Fluff-covered faces. Adults and children experimented with Fluff as a hair (and beard, and eyebrow) styling product. A modern-day reincarnation of Fluff's inventor, Archibald Query, oversaw the festivities dressed in his finest plaid sport jacket and gingham pants. 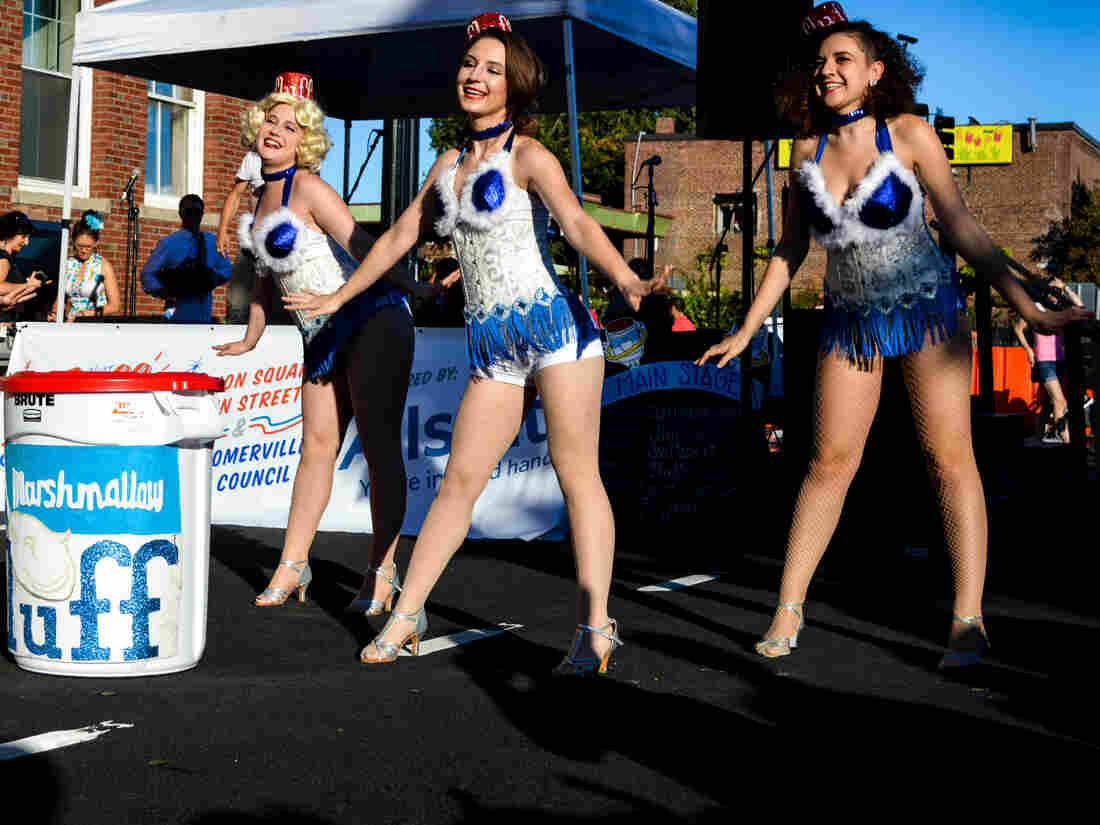 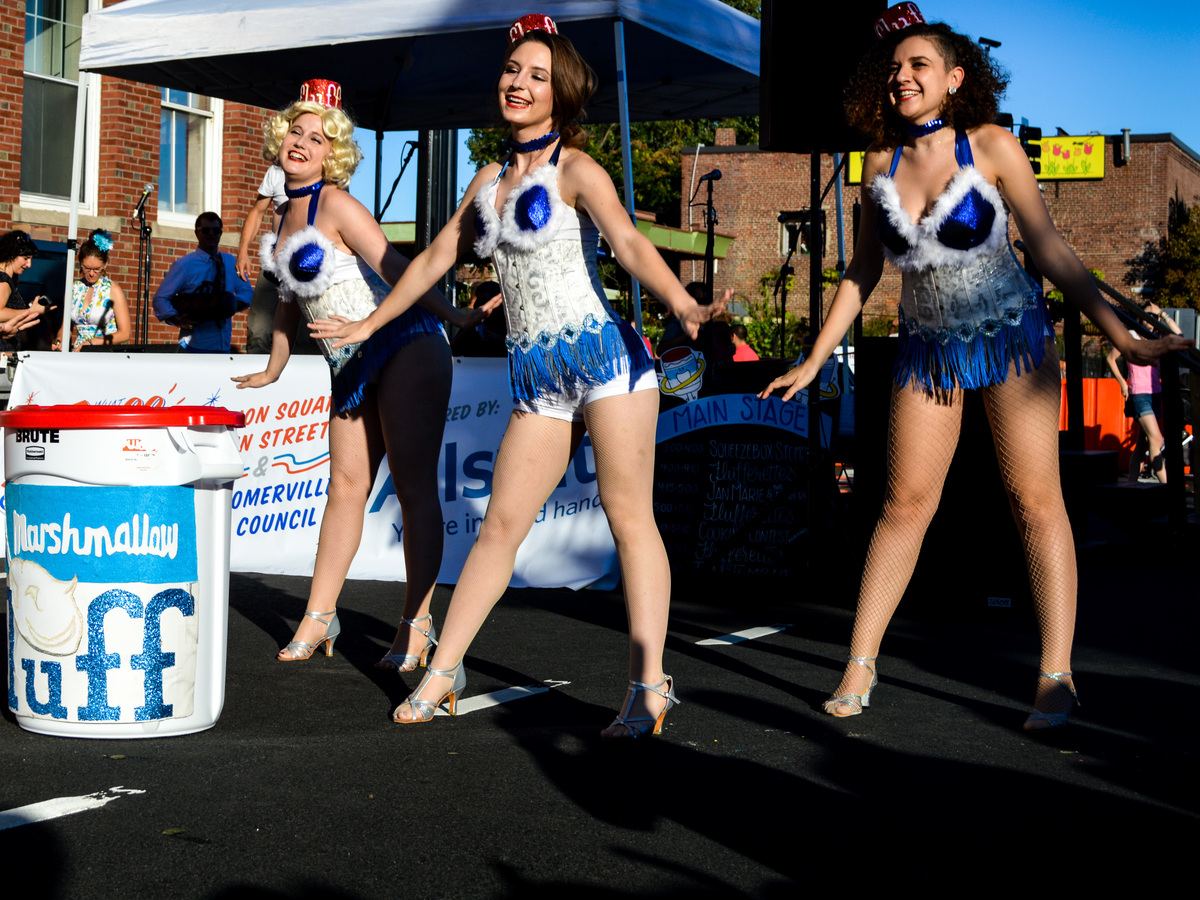 The Flufferrettes perform at the 12th annual What the Fluff? festival, celebrating 100 years of Marshmallow Fluff.

In 1917, the real Query began whipping up marshmallow cream in his Union Square home, selling it door to door. Three years later, recently returned war vets H. Allen Durkee and Fred L. Mower purchased his recipe for $500 (about $6,000 in today's currency). The team gave the sweet goo its iconic name and made it the signature product of their new business partnership, the Durkee Mower Company, based in Lynn, Mass., where the family-owned business still operates.

"Whether they grew up in the '80s, '70s, or '60s, everyone thinks of Fluff as their childhood treat," Mimi Graney, Fluff Fest founder and author of Fluff: The Sticky Sweet Story of an American Icon, told me at the event. "And the fact that it's been around for 100 years means that everyone is right."

As a kid in suburban Philadelphia, my marshmallow cream intake peaked each spring, when my mother would blend it with cream cheese and a strawberry (for color) and let my brother and me plunge fresh strawberries into the pink dip. I loved the stuff.

But New Englanders lay a special claim to Fluff. Paul Walker, vice president of manufacturing at Durkee Mower, says that his team produces 8 million pounds of Fluff each year and at least half is sold in New England.

Many generations of New Englanders came out for the festival.

Alecia Villa, a 19-year-old from Burlington, Mass., attended with her parents and brother. Her favorite way to eat Fluff? "With a spoon, out of a jar."

Her father, Chris Villa, grew up a couple of miles from the square. He remembers teaming up with other kids to help neighbors shovel snowy drives. His grandmother would reward them all with cocoa topped with Fluff.

Over at the Fluff Festival merchandise tent, one mother purchased a Fluff Fest onesie and held it up to her infant. By the music stage, another mom, Ann Kiely, was celebrating her birthday (some age over 65, she said). She wore a ski cap sporting the Fluff logo — a hand-knit gift from the daughter standing next to her. With a mischievous smile, Kiely explained the "health benefits" of Fluff: "It is only 40 calories for two tablespoons and it actually has egg white powder in it, so it's a full protein."

Not everyone sang such praises.

KC Cohen, a photojournalist and native Californian, told me she hadn't heard of Fluff until she came East for school. "I — don't like Fluff," she confessed. But as an artist, she is drawn to its iconic jar — simple white and blue with a retro font and a red lid. She hand-sewed 64 tiny Fluff jar ornaments to sell at the festival. Ninety minutes in, they were gone.

Fluff was not the first or last marshmallow cream on the market. In her book, Graney describes how the Massachusetts-based Emma E. Curtis Company was already producing its own version when Query got started. And it was Curtis who in 1918 first published a recipe for pairing marshmallow cream and peanut butter on a sandwich. In 1957, Kraft Foods got in on the marshmallow cream market, too.

But the very next year, Durkee Mower came up with the name "Fluffernutter" and launched a national ad campaign that landed the sandwich — and their Fluff — a lasting place in American childhoods.

At Fluff Fest, there were plenty of Fluffernutters to be had — like 3,000 of them. Students from Somerville High School's music department circulated the crowd selling sandwiches to raise money for school trips.

For the non-traditionalists, there were novel recipes to try. Local restaurants setup shop under tents selling Fluff spread over doughnuts, folded into empanadas, and tucked into pierogis. At the Fluff cooking competition table, judges sampled everything from a "Flufferita pizza" made with Fluff and jam (instead of mozzarella and sauce), to an Indian pakora fried snack filled with sweet potato and Fluff.

Patrick Chhoy, 26, from Lowell, Mass., won "Most Inventive Recipe" for his Fluff Maki — deep-fried sweet potato slices dressed with hot sauce, rolled in rice and seaweed, and topped with Fluff, avocado, bacon, and chili powder. He clinched the win with no prior Fluff experience. "I grew up on bologna sandwiches," he said.

Over at the festival's Fear Factor table, the adventurous were creating wild (and often nauseating) Fluff-inspired finger foods. Festival guests picked from crackers smeared with Fluff blended with a range of condiments, from chocolate syrup to salsa. They then added toppings like green beans, Lucky Charms, capers, or Spam. I met Mike Bertolami of Waltham, Mass., as he and his 13-year-old son sampled Fluff mixed with Tabasco sauce and topped with tuna and corn.

"Very interesting combination," he told me with a wry smile. "I think this might be the future."

For Graney, this inventiveness is really what Fluff Fest is all about. She created the festival as then-director of Union Square Main Streets, a local neighborhood group, as a way to jump-start the local economy by harnessing what she calls its "creative assets." Many told her she should make the neighborhood more like nearby Kendall Square, home to biotech startups and innovation powerhouse MIT.

"But I wanted to show how Union Square does invention — off-beat, homegrown and a little quirky," she said. The festival's official title is "What the Fluff? A Tribute to Union Square Invention."

But Fluff Fest is also about nostalgia.

One mother, Victoria Brenckle, sang me a Fluffernutter jingle she remembers from old TV commercials as her 2-year-old daughter sat wearing a homemade Fluff jar hat. The toddler had never tried Fluff — but today would be the day.

"We were hoping to give her a Fluff doughnut but the line is crazy long," Brenckle said. "We definitely have to get her some Fluff. She's a New Englander."