Accessibility links
One Man's Quest To Feed A Hungry, Isolated California County : The Salt The harsh terrain lacks farmland. And the nearest large grocery store is 100 miles away with sometimes no way to get there. So more residents have come to rely on Jeff England's food bank delivery.

One Man's Quest To Feed A Hungry, Isolated California County

One Man's Quest To Feed A Hungry, Isolated California County 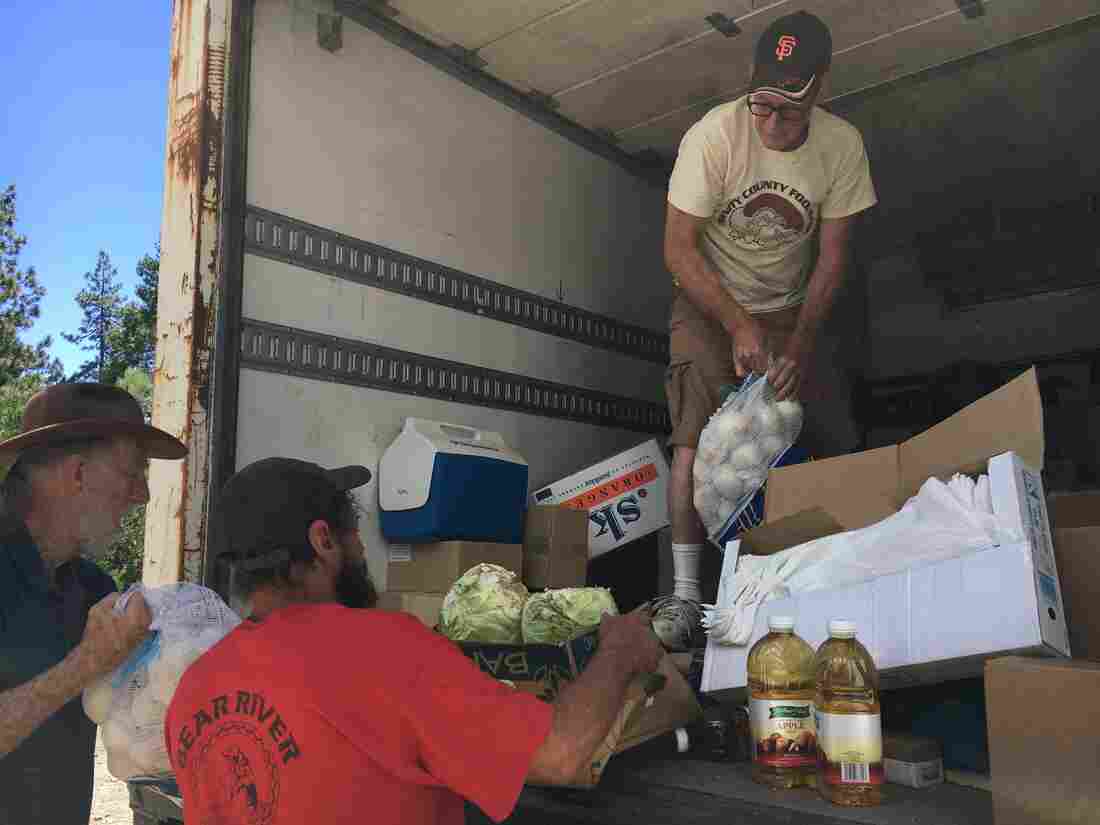 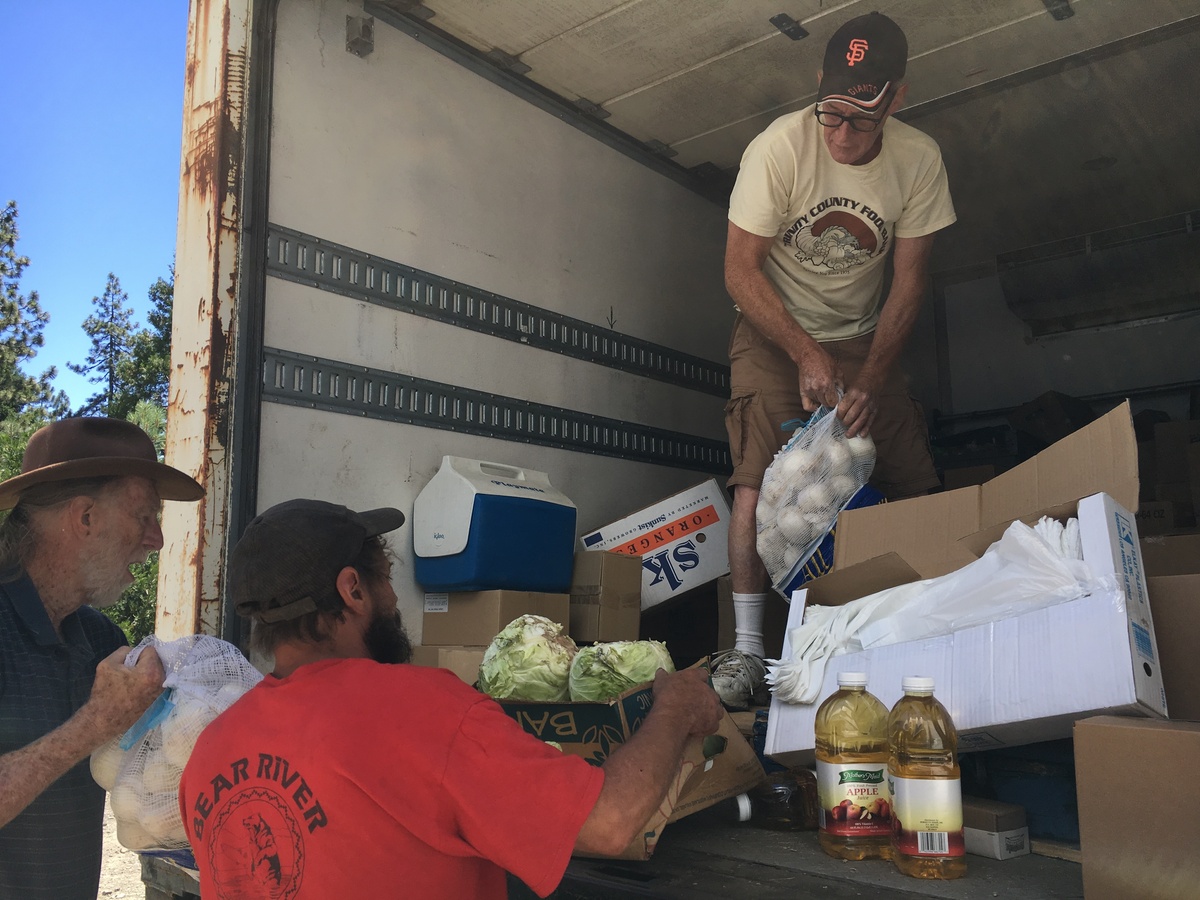 Across the United States, more than one out of every 10 people is "food insecure," which means they don't know where their next meal is coming from. In Trinity County, a sparsely populated area in northwestern California, that number is closer to one in five.

Jeff England, director of the Trinity County Food Bank, is trying to change that.

The sun has barely come up in the tiny town of Douglas City, Calif. England and two other men are almost done packing a couple of trucks with food.

"We're loaded to the gills," he says, pointing to produce like cabbage, white onions and sweet potatoes, along with packaged and canned foods.

In Some Rural Counties, Hunger Is Rising, But Food Donations Aren't

I hop into the cab of the 20-year-old truck with a rattling refrigeration unit, joining England as he begins his monthly food delivery run to the county's hungriest and most isolated residents. He'll drive 230 miles today, 650 by the end of the week.

"When I make my trip, because of all the twisty, turny roads, I kinda have to take it a little bit easy," he says. Too sharp a turn can upend the pallets of food he's carefully packed for today's 10 1/2 hour drive.

We pass vehicles that have fallen off the side of the road, abandoned. All around us are thickly-forested mountains, one jagged ridge after another.

"If it was just flattened out completely, with the mountains and everything else, it would be the size of Texas," he says.

"You just go without"

At Solid Rock Church in the town of Hayfork, Calif., more than 50 people line up for food which England cobbles together from a spider's web of local, state and federal programs.

Teresia Kirkland is volunteering at this event, but she also collects free food, which she often combines in casseroles.

"Without the food bank you just go without," she says. "I'm on social security, and after you pay all your bills, if you have an emergency — if you have a flat tire or anything that needs to be taken care of — you need to wait till the next month."

"That makes for a long month. A long, long month," chimes in Glenda Raines.

Both women say they used to supplement their budgets by taking items to a recycling center in town, but that's closed now.

Raines says that until recently, she and her husband were homeless, camping out by the creek. "A friend let us stay in a garage made into a little cabin. I don't know how long that's going to last. I'm still considered homeless."

Raines says she prepares the food she receives on a little propane stove. Her husband, Gary, says he's frustrated that there isn't more senior housing, and that a glut of marijuana growers coming into Hayfork are jacking up rents. He says he worked in the sawmill for 17 years when it was still open. When he broke his back, he retired. Now he gets just over $800 a month in social security.

"Last month I got a $180 ticket for being homeless in the National Forest. I didn't even know that was the law," he says, with a slightly bitter laugh.

Despite the obvious financial struggles of many Trinity County's residents, more than 10 California counties actually have higher poverty rates. But Trinity is one of the state's most food-insecure places. To find out why, I head to what looks like the center of food abundance in Trinity County: the farmers market in Weaverville. 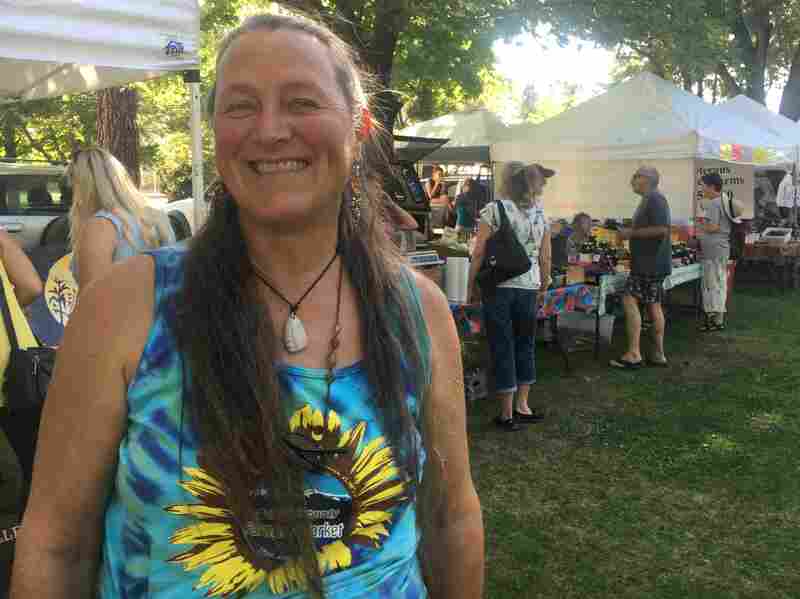 Sue Corrigan manages the farmers market in Weaverville, Calif., where only one Trinity County man is among the farmers selling produce and prepared foods. Lisa Morehouse hide caption 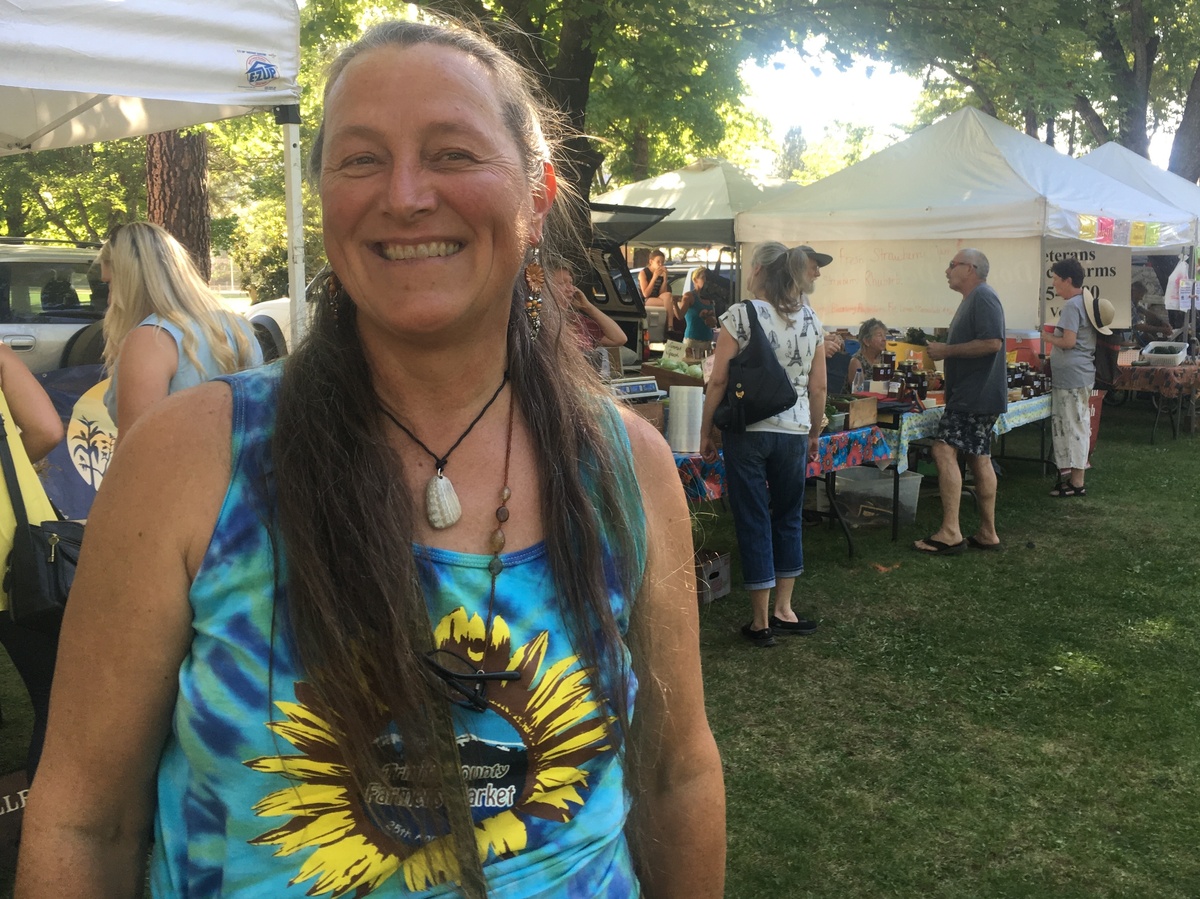 Sue Corrigan manages the farmers market in Weaverville, Calif., where only one Trinity County man is among the farmers selling produce and prepared foods.

Sue Corrigan — who founded the market over 20 years ago — is shopping for zucchini, tomatilloes for salsa, and onions for her husband to make onion rings.

As she points to one vendor, Corrigan says something surprising: "This next farmer is our only farmer in the Weaverville area." That farmer is the only local of about 10 who are selling produce here.

Corrigan, whose family had farmland here starting in the 1830s, says that years ago, much of the potential land was taken out of commission. In the 1950s, "The government was taking our land," she says, to build the Trinity Dam, which sends water to Central and Southern California.

"One of our last areas that was open enough to do farming, and they buried it with a lake," she says, wistfully.

It's all about priorities, Corrigan says.

"We've had three different rushes: First the gold rush, second the timber rush, and now the marijuana rush, which is called the green rush. The focus has been on other industries and not a food-sustainable industry."

England maneuvers around potholes to get to the most remote drop-off point today. He says that last winter, he defied state highway workers and drove over a closed, snow-covered road to deliver food to people who'd been stuck for months.

"I said, 'I have to go.' I slipped, lost traction, gained traction," he remembers. "I just knew they needed the food so I decided to take the chance and I made it."

"That takes a lot of guts," says Lauren Turner. She's come to the food drop-off at the volunteer fire department in the tiny town of Zenia.

"Coming up the back of the mountain, they call it Refrigerator Alley for a reason," she says. "It gets pretty slick. So, we're grateful. It's not easy up here."

As for grocery shopping?

"Usually it's 100 miles in any direction from here to a large town," says Turner. That's more than a two-hour drive, which she makes only once a month. In between, she relies on the Food Bank delivery.

"We keep the canned good for times when we can't get off the hill, and the fresh food, I get imaginative," she says. "I like to take the veggies and cook them in fruit juice and then I like to put fish on top of them the last 15-20 minutes. Sometime we get frozen fish, so I make a lot of one-pot meals."

Beyond Pantries: This Food Bank Invests In The Local Community

England says he and his team have more than doubled the amount of food they're bringing into Trinity County in the last year. The Food Bank and Trinity County Food Assistance deliver one bag or box of food to 2,500 households each month. That's 20 percent of the county.

England says the community here is incredibly supportive, but some people have complained that the food bank just enables drug-addicted or homeless people.

"We don't judge people, and those druggies have kids. The kids might not get food normally," England says, but if the food bank provides, then they do.

That's an attitude that comes from personal experience. England says he's been out of work before. "And I've struggled in the past, a long time ago, with some addiction problems. It just felt so good to be able to go to a place when you're hungry."

He remembers that first meal in a soup kitchen.

"It was in a church. It was spaghetti, garlic bread and a salad," and they sent him and others home with cans of soup and chili.

"A lot of people don't know what it is to be hungry," he explains. "It's a horrible feeling. You're weak. You can't do anything. You don't have any ambitions. I'm so happy to be able to turn the table," he says, and help the people whose shoes he's been in before.

This piece was produced in collaboration with the Food & Environment Reporting Network, a non-profit, investigative news organization. Ariel Plotnick helped with research and reporting for this piece. A broadcast version of this story aired on NPR's Here & Now.