Accessibility links
At A Time We All Need Comfort, Pie Bars Serve It By The Slice : The Salt In the past year, sales of pie — and the opening of pie bars — has taken off. One possible reason? Pie brings people together, bakers say, especially in times of tragedy and political discord. 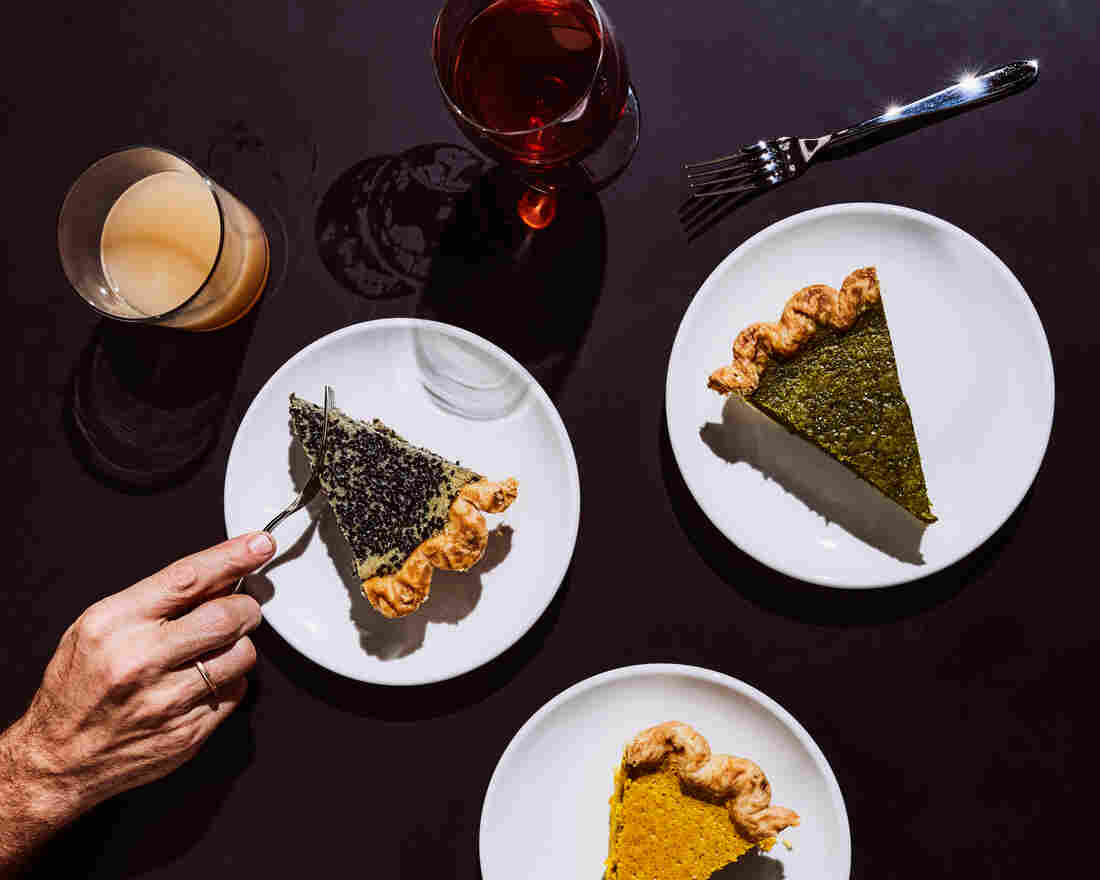 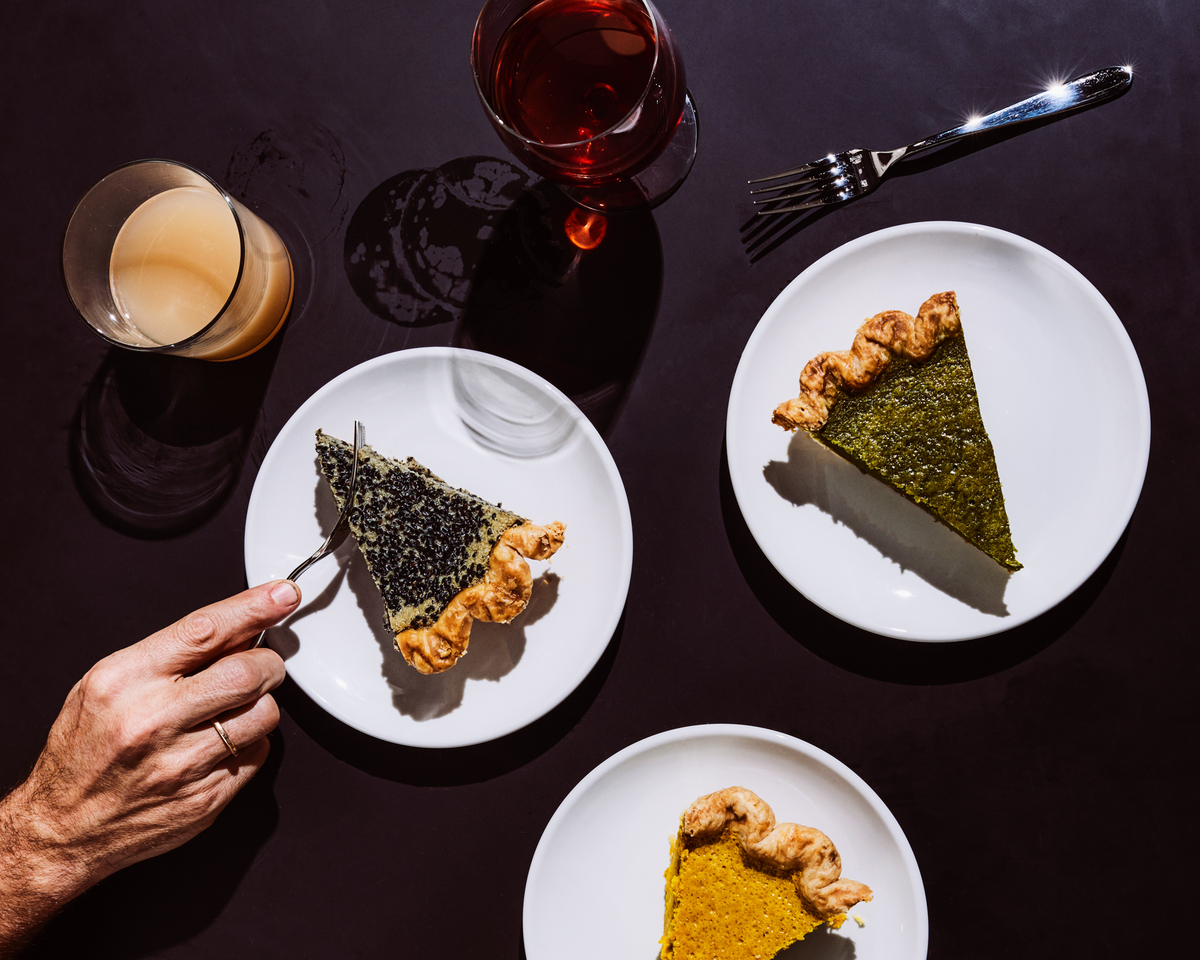 When you push through the pumpkin-orange door into the cozy, diner-shaped Florence Pie Bar, you're likely to find a table of new moms with their babies or another of old friends: Groups delighting in neighborly conversation, old-fashioned community and a slice of comfort.

Follow the string of white lights along the glass countertop in the Northampton, Mass., eatery, and survey the sweet and savory pies du jour, from nectarine-blueberry to coconut cream to eggplant parmesan. Shoot the political breeze with the counter staff, especially if the friendly face of local politics — City Council President Bill Dwight — is wielding the pie spatula. Then say hello to the pie wizard behind the tiny kitchen's industrial-sized mixer, the one with the wire-rimmed glasses and salt-and-pepper ponytail. That's Maura Glennon, who left a two-decade career as a college music professor to become the humble owner of a pie bar in the western Massachusetts college town. 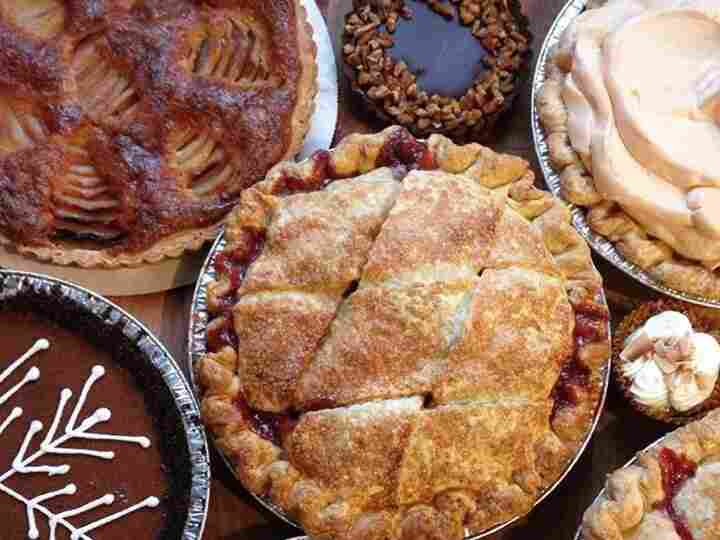 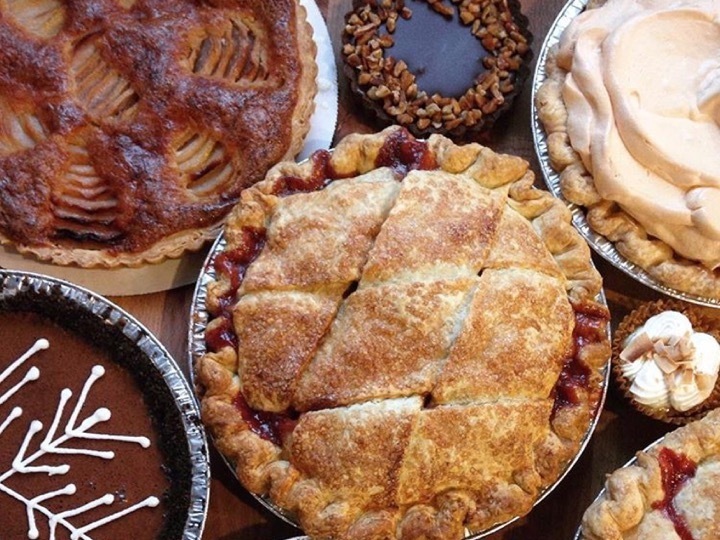 In fact, some home bakers are having what Glennon is having — the career-changing dream of transforming their life-long love affair with the ultimate comfort food into a profitable, expandable business: the American pie bar, the next, new place where everyone knows your name. Some serve beer and wine; a few, like Seattle's twin pie bars — Pie Bar Capitol Hill and Pie Bar Ballard — mix craft cocktails. Key Lime Pie-tini, anyone?

The recent proliferation of pie-centric eateries across America is proof that pie bars are having a culinary moment. But instead of mass-produced apple pie and other traditional flavors, this entrepreneurial generation of bakers make pie like mom used to make, but without the Crisco or Cool Whip. With fresh, seasonal ingredients and creative flavor combinations, they're baking a wide assortment of traditional and innovative pies, like Glennon's blackberry ginger (a lemony mix of whole berries and crystalized ginger in an all-butter crust) and salted chocolate bites (an ethereal fudge mini-pie in a graham-cracker crust).

However fresh and delicious, some customers complain of sticker shock. Slices cost between $4 and $8; whole pies run $22 to $42. Most, however, write rave reviews like "Amazing!" and "HOLY MOLY!" on Yelp. Or to quote Massachusetts Sen. Elizabeth Warren's hand-written thank you to the Florence Pie Bar staff: "Best cherry pie ever!" 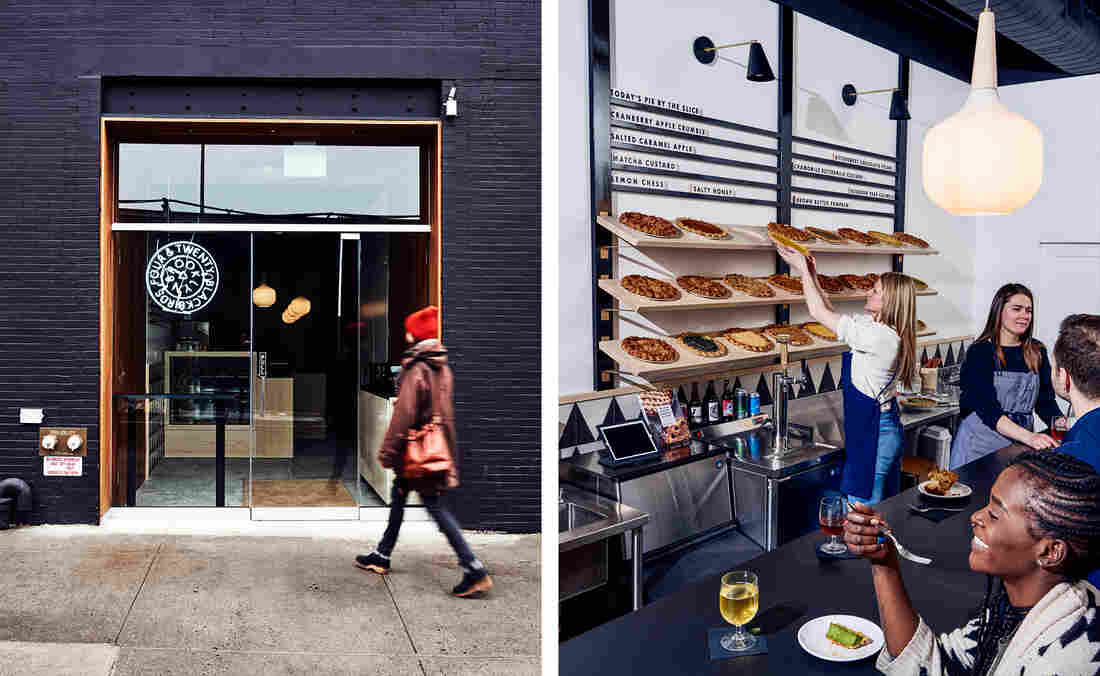 If the American pie bar is news to you, you're not alone. Emily Elsen says she didn't realize she was one of the original trendsetters when, seven years ago, she and her sister Melissa opened their first Four & Twenty Blackbirds in Brooklyn. Even earlier this year, when the Elsen sisters opened their fifth location — a 10-stool bar where you can chase a slice with wine or beer — Emily says she had yet to realize the extent of this sweet and widening outbreak.

"Having been in the business and written a cookbook, we've seen people [including Ms. Glennon] start their own business," Elsen says. "But I'm surprised to find out there are as many as there are."

There's no definitive data on just how many pie bars there are — or by how much the pie-bar world has grown. But according to the American Pie Council, which collects data on pies, total pie sales have been growing steadily — now at about $1 billion per year.

And sales of slices — pie bars' bread and butter — seem to be one of the biggest growth areas. Between February 2016 and February 2017, the Nielsen Company reported a 10.1 percent sales increase in the slice/half-pie category — and a 28.7 percent jump in the sale of mini-pies.

One possible reason for the uptick? Pie brings people together, bakers say, especially in unsettling times of tragedy and political discord. Like last Election Day in Florence, when red hats and blue buttons raised a celebratory slice to their chosen presidential candidate.

"Sharing food that is familiar and handmade," Elsen explains, "reminds us to be thankful for the blessings we do have."

Every Friday, Mike Walsh shares his gratitude for a sweet slice of comfort with more than 500 Facebook friends. For Walsh, a beefy retiree who posts photos of his weekly indulgence on social media, "Friday is Pie Day."

"I sit, relax and eat pie," Walsh says of the Florence Pie Bar. "It's definitely therapeutic."

Laurie Gray, founder of Pie Bar Long Beach, is the rare owner who caters to those with special dietary needs with gluten-free and vegan pies, and for the calorie-conscious, she serves up an adorable assortment of mini pies. Patrons of this one-year-old California bakery can share a Pie Flight (four shot glasses filled with four different flavors) or take home a Cutie Pie (a portable pie in a mini-mason jar).

And in addition to these personalized pie options, at least two new pie franchise companies seem to be helping the pie-bar trend. Since 2014, Knoxville, Tennessee's Buttermilk Sky Pie has sold 13 franchises throughout the southeastern U.S. And since 2015, LA's Pie Hole has sold five in the U.S. and two in Japan.

The biggest challenge pie bar owners says they face is maintaining sanity and quality in the face of increasing demand, especially through the holidays. For Thanksgiving alone, Four & Twenty Blackbirds makes a dizzying 4,500 pies in four days for their five locations, plus Shake Shack, among other area restaurants. 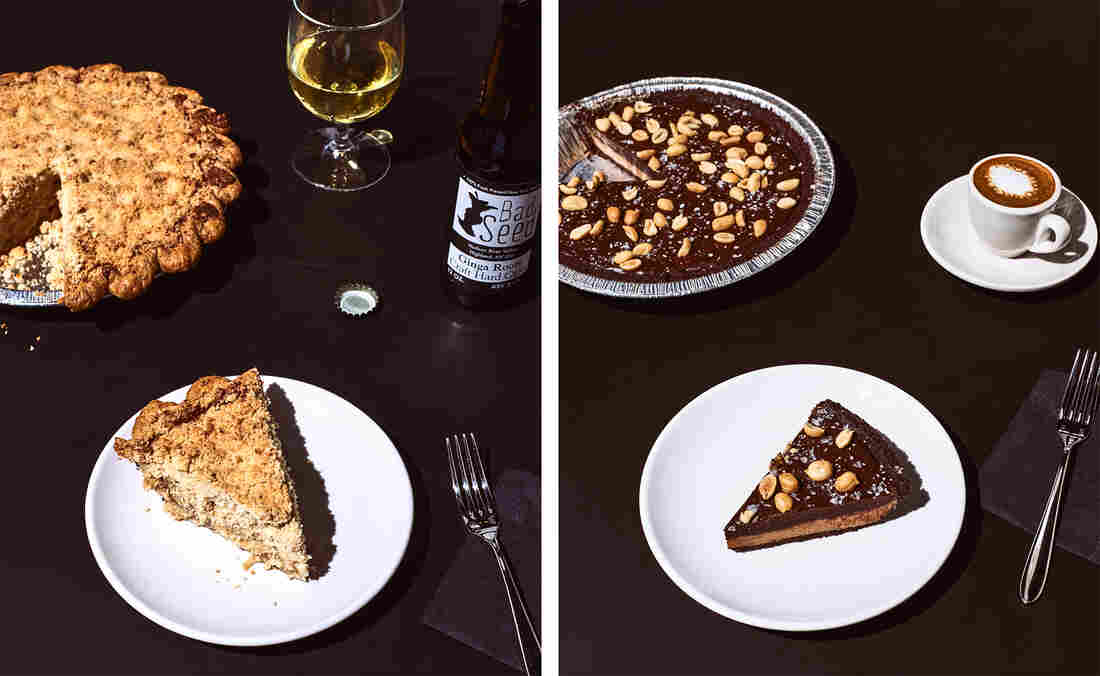 And yet, like the pie-baking heroine of the Broadway musical Waitress, owners seem to love what they do. "When I crimp a crust, it feels like I'm loving the person I'm making it for," Glennon says. "There's love behind it."

Wanna share the love? Here's a signature recipe from one of New York City's original pie bars. If you never learned to crimp, you can always use a ready-made crust.

One pastry-lined, round 9-inch pie pan, hand-crimped and frozen

Position a rack in the center of the oven and preheat to 375F.

In a medium bowl, mix the melted butter, sugar, cornmeal, salt and vanilla paste. Stir in the honey and eggs one at a time, followed by the heavy cream and vinegar.

Place the pie shell on a rimmed baking sheet and pour the filling directly into the pie shell. Bake on the middle rack 45-50 minutes, rotating 180 degrees when the edges start to set, 30-35 minutes through baking. The pie is finished when the edges are set and puffed up high, the top is golden brown, and the center is no longer liquid but looks set like gelatin. Allow to cool completely on a wire rack, 2-3 hours. Serve slightly warm or at room temperature.

The pie will keep refrigerated for five days or at room temperature for three.

Jean Fain is a Harvard Medical School-affiliated therapist and author of The Self-Compassion Diet.