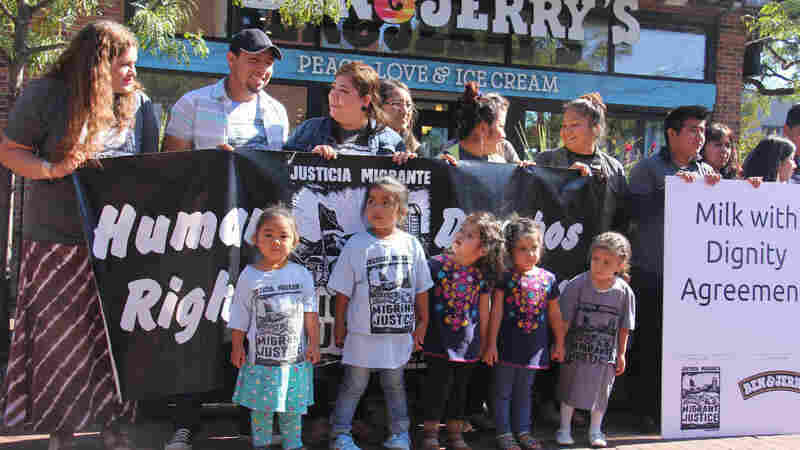 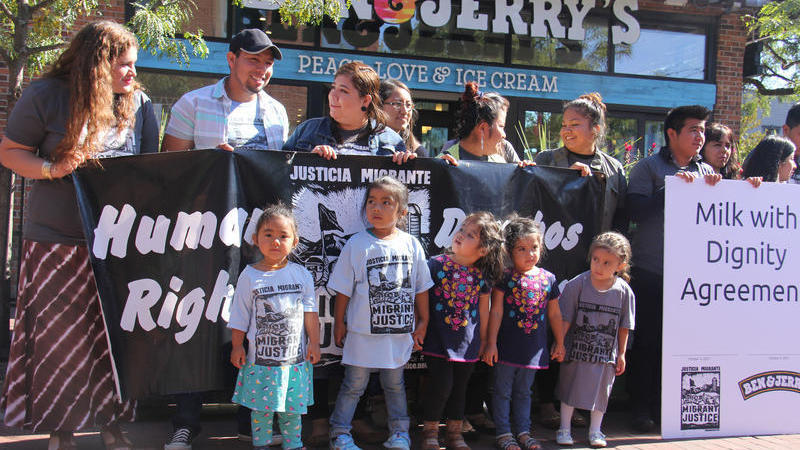 Migrant Justice activists gather to celebrate the signing of an agreement with Ben & Jerry's that took two years to negotiate.

Ben & Jerry's and Vermont dairy farmworkers have come to an agreement on a program they say will ensure "just and dignified working conditions" on the Vermont farms that supply milk for the ice cream company.

"This is the first expansion that we've seen from the model of worker-driven social responsibly that was pioneered by the Coalition of Immokalee Workers in the Florida tomato fields," says Enrique Balcazar of Migrant Justice. "It is a great victory and an honor for us dairy workers to expand that model to the dairy industry of Vermont."

Migrant Justice has been negotiating with the ice cream company for two years to create this worker-led initiative. The organization plans to begin immediately recruiting dairy farmers who supply Ben & Jerry's to join the the Milk with Dignity program, with a goal of eventually sourcing all of the ice cream company's milk through the program.

Both negotiation parties decided to keep the final agreement private. However, Solheim says that as part of the initiative, Ben & Jerry's has committed to pay dairy farmers who join Milk with Dignity a higher price to support wages and safe working conditions.

"There is a dedicated premium for Milk with Dignity, and dedicated pass-through for workers, to incentivize them also participating in this," says Solheim.

In addition, he says the program involves educating dairy farm workers of their rights and the pathways to file complaints, which will be done by Migrant Justice.

He says an independent nonprofit called the Milk with Dignity Standards Council will work with farmers and dairy workers to make sure all are in compliance with the labor standards outlined in the agreement. Ben & Jerry's currently receives milk from 85 Vermont dairy farms, many of which are part of the St. Albans Cooperative Creamery.

"This will be the first step in bringing about a change where we will begin to be treated with a bit more respect and be given more rights," says Olga Benitez, a Vermont dairy worker, "because in this country we know it's difficult for our rights to be respected."

She says they began negotiations over two years ago, and it's hard to believe both parties now have an agreement.

The crowd shouted "Si se puede" as dairy workers and Migrant Justice representatives stepped up to sign a poster board representation of the agreement.