Accessibility links
Which Items In Our Kitchens Contain BPA? : The Salt Manufacturers are not required to disclose whether products contain BPA, which makes it hard to know which kitchen plastics include the additive — or other functionally identical compounds.

Which Items In Our Kitchens Contain BPA?

Which Items In Our Kitchens Contain BPA? 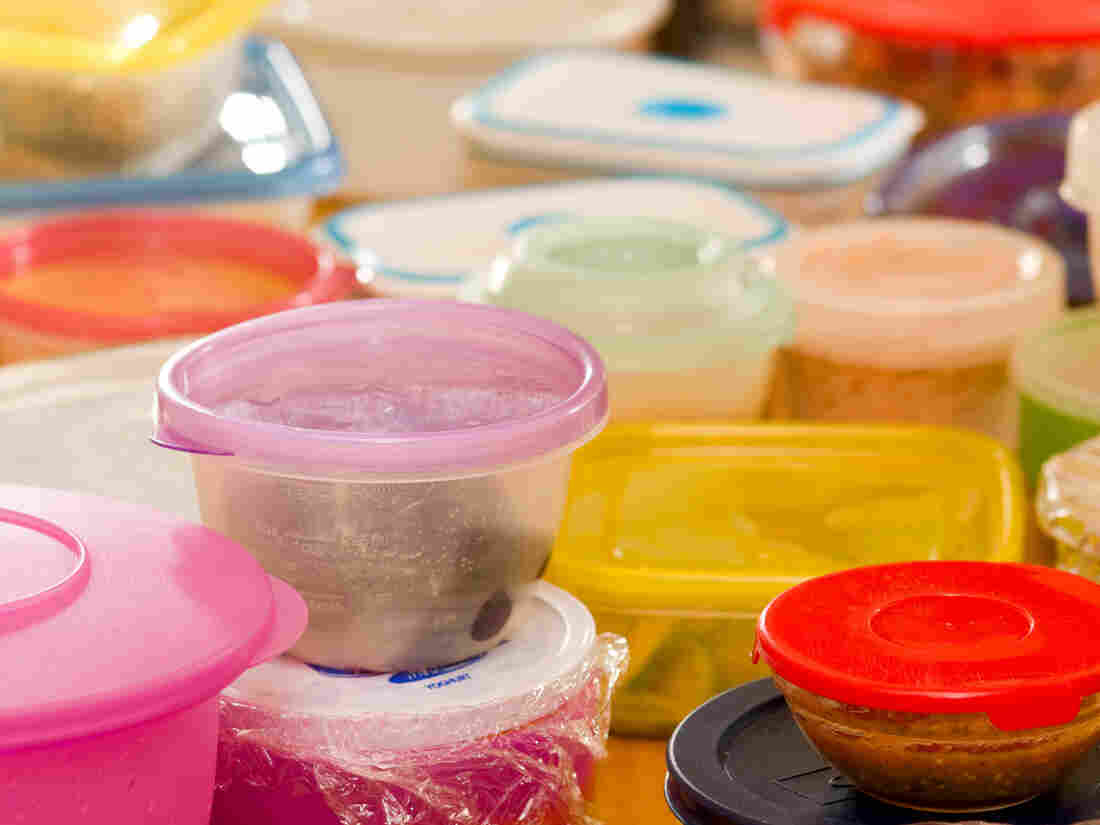 Manufacturers are not required to disclose if BPA, or other similar compounds, are used in their packaging. jmalov/Getty Images hide caption 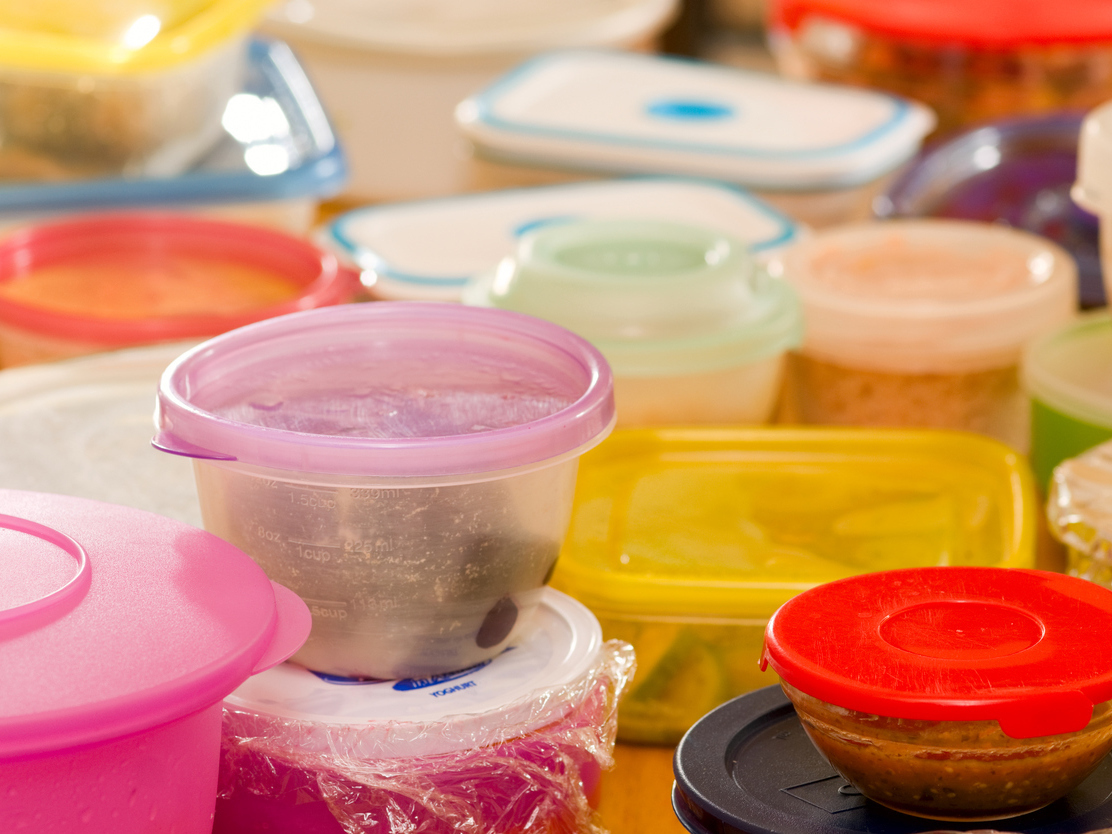 Manufacturers are not required to disclose if BPA, or other similar compounds, are used in their packaging.

It's not exactly a secret that many plastic products have an additive called "bisphenol A," or "BPA," for short. NPR has covered the chemical substance many times, including here, here, and here.

Among other things, BPA helps make clear, hard plastic — the kind we associate with food storage containers and water bottles — and also lines the inside of many metal cans to prevent an aluminum taste from leaching into food or drink. The catch: Some studies suggest BPA could also disrupt our reproductive systems by changing sperm quality and increasing the risk of reproductive cancers like prostate and breast cancer.

Despite the coverage of BPA, when a reader wrote to the column and asked whether frozen dinner trays, rotisserie chicken containers, and other common items contained BPA, I was stumped. The reason? Manufacturers are not required to disclose whether their products contain BPA.

With limited information about what exactly goes into specific products, how should we view the materials in our kitchen? I reached out to academic scientists and the U.S. Food and Drug Administration for answers.

The root of scientists' concern about BPA in containers is that the chemical can leach out of packaging and into food. This happens when plastic deteriorates and releases its chemical contents, according to Nancy Wayne, a reproductive neuroendocrinologist at UCLA. Acidic foods, like tomato sauce, can break down plastic. Plastic also breaks down when heated; manufacturers may heat metal cans lined with BPA to sterilize them, and consumers frequently put plastic containers of food in the microwave. Once released, BPA can contaminate food and enter the human body, where it interferes with hormonal processes. This hormonal interference has been linked to cancer, heart disease, and obesity.

"We know that the vast majority of Americans [95 percent according to one study] have detectable levels of BPA in their blood and urine," Wayne says. "We're constantly exposed to it."

Nonetheless, the FDA's official current position is that the amount of BPA consumers encounter in packaging is safe.

"We've done a systematic evaluation of all the information we have," says Jason Aungst, a supervisory toxicologist at the FDA. "At high doses of BPA, it's very clear there are [hormone]-related effects. But when you get to the low dose, there's no consistency. You see so many contradictions between different studies."

Aungst says the average consumer would have to be exposed to 100,000 times more BPA than is typical to suffer health effects, and that most agencies around the world agree with the FDA that BPA in packaging is safe.

But many scientists remain skeptical that BPA is harmless, and several states have partially banned BPA. Plus, there's one more wrinkle: Products marketed as "BPA-free" might not actually be safer than products with BPA, according to George Bittner, a professor of neurobiology and pharmacology at University of Texas, Austin. (Bittner also is the founder of PlastiPure, a company that evaluates materials for chemical effects on estrogen.) That's because "BPA-free" products may contain functionally identical compounds that go by different names, like BPS, Bittner explains.

Fortunately, consumers who are not fully comforted by the FDA's guidance have options. "You do have some control," Wayne says. "Just be very thoughtful."

Wayne switched all of her food storage containers from plastic to glass. When she noticed her parents had a collection of old, warped plastic food containers, she bought them glass too. Although Wayne admits buying glass may be pricier than plastic on the front end, she says glass lasts longer. As an alternative to plastic water bottles, Wayne recommends stainless steel. And to get more non-plastic options when shopping, she suggests talking to grocery store management.

For those who store or purchase food in plastic containers, Wayne has some cardinal rules: "Never ever heat plastic in the microwave. And don't put it in the dishwasher. Wash it by hand with gentle detergent." And if the plastic begins to visibly degrade, it's time to get rid of it.

Finally, both Wayne and Bittner say more federal funding should be directed to developing new materials that don't have chemicals that could tamper with our hormonal wiring.

Until then, we'll have to live with the plastics we have, according to Wayne: "It's the devil that we made a deal with."

Gnawing Questions is a semi-regular column answering the food mysteries puzzling us and our readers. Got a question you want us to explore? Let us know via our contact form.