Accessibility links
Weedkiller Dicamba Hurts Unprotected Crops, Environment : The Salt When a drifting weedkiller hit America's farming heartland this summer, it damaged crops and friendships. The chemical could also be bad news for other vegetation, as well as bees and butterflies. 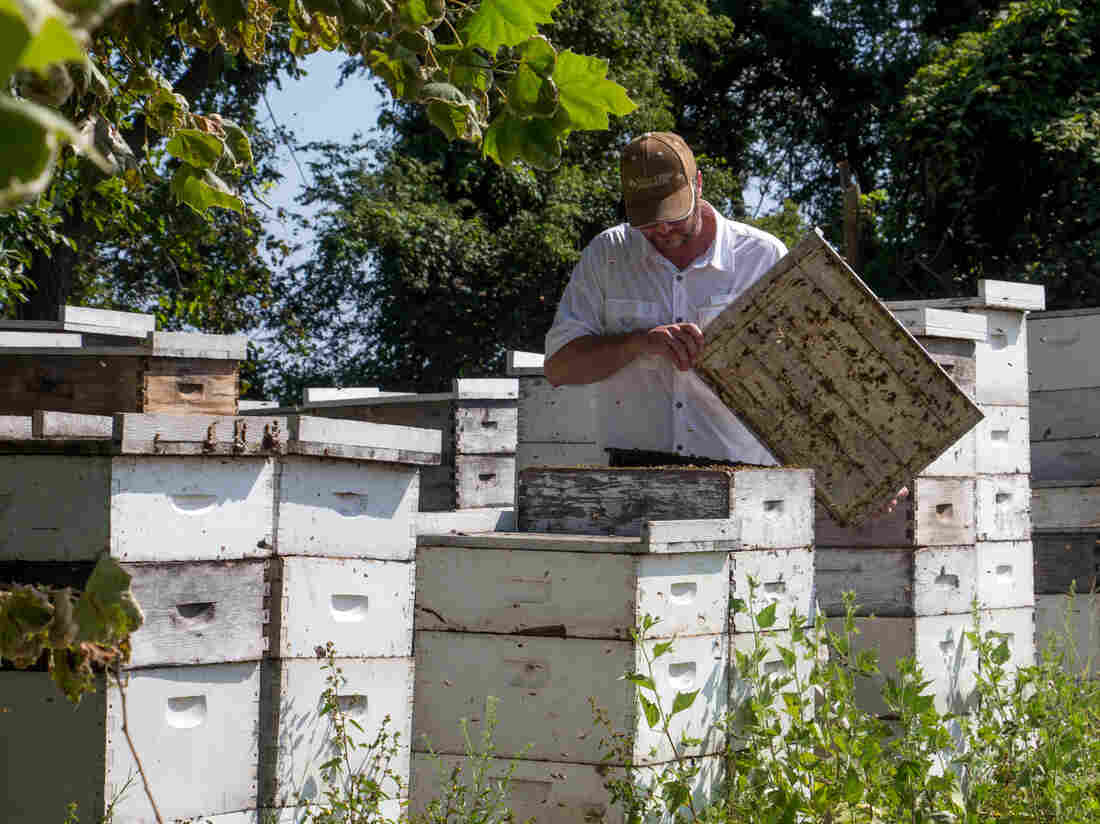 Richard Coy inspects one of his hives near Burdette, Ark. Honey production at this location fell by almost half this year — which he attributes to the drifting of weedkiller dicamba to nearby flowering plants. Dan Charles/NPR hide caption 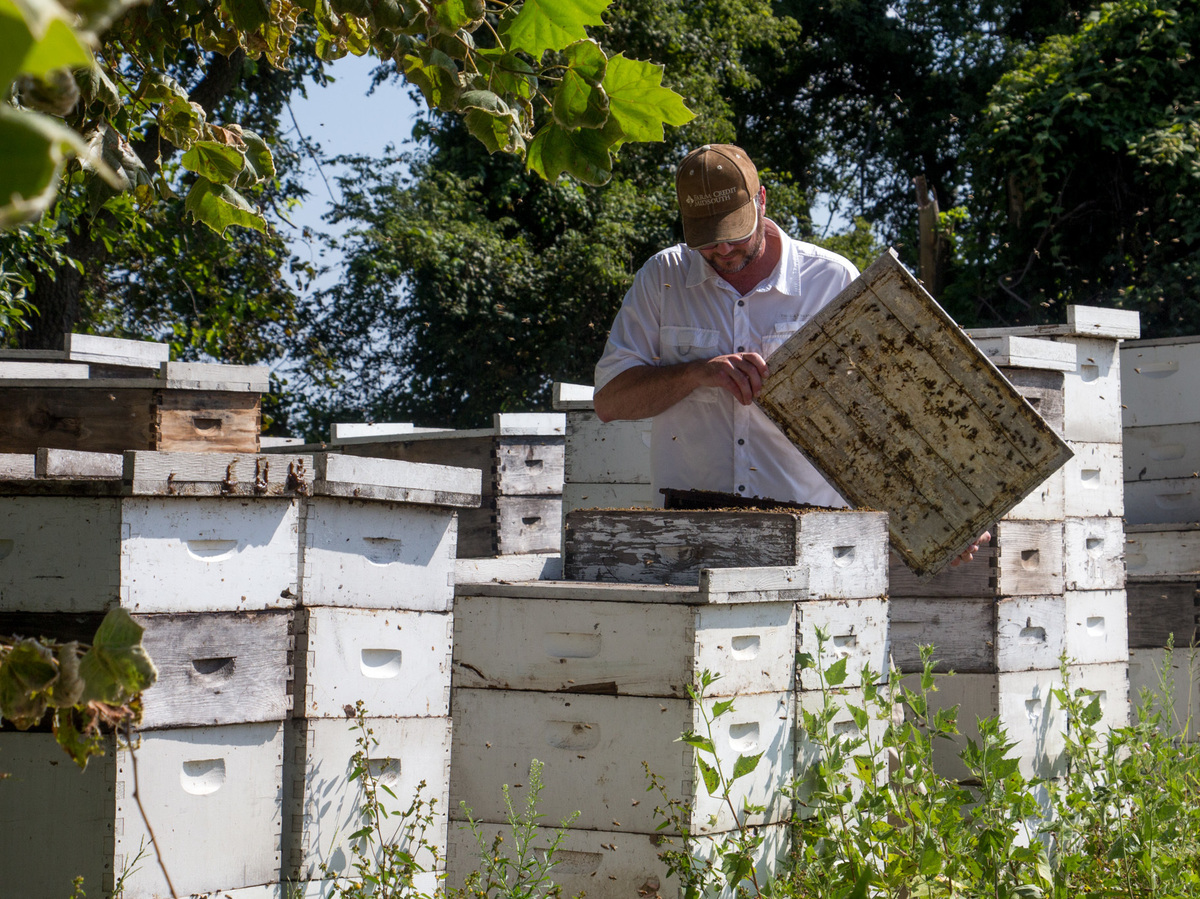 Richard Coy inspects one of his hives near Burdette, Ark. Honey production at this location fell by almost half this year — which he attributes to the drifting of weedkiller dicamba to nearby flowering plants.

There is one small field on Michael Sullivan's farm, near the town of Burdette, Ark., that he wishes he could hide from public view.

The field is a disaster. There are soybeans in there, but you could easily overlook them. The field has been overrun by monsters: ferocious-looking plants called pigweeds, as tall as people and bursting with seeds that will come back to haunt any crops that Sullivan tries to grow here for years to come.

"I'm embarrassed to say that we farm that field," Sullivan says. "We sprayed it numerous times, and it didn't kill it." 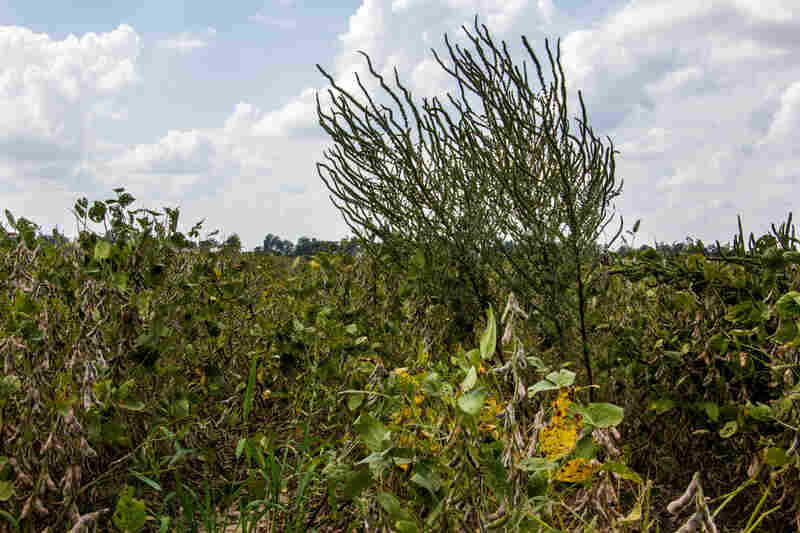 Pigweeds, which have become resistant to some well-known herbicides, infest a soybean field in northwestern Arkansas. Dan Charles/NPR hide caption 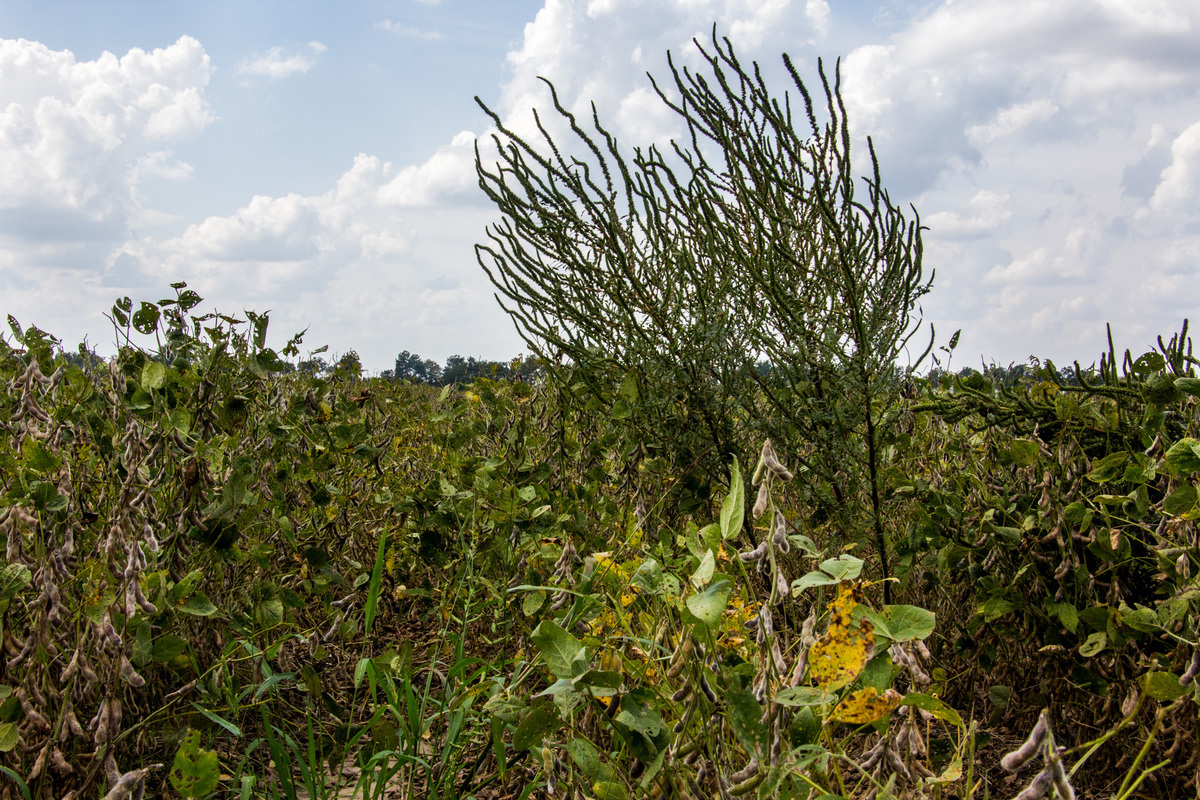 Pigweeds, which have become resistant to some well-known herbicides, infest a soybean field in northwestern Arkansas.

These weeds have become resistant to Sullivan's favorite herbicides, including glyphosate, which goes by the trade name Roundup.

Yet the rest of Sullivan's farm is beautiful. As farmers like to say, the fields are "clean." There is not a weed to be seen.

In those fields, he planted soybeans that enjoy a novel superpower. They've been genetically modified by Monsanto, the biotech giant, so that they tolerate a different weed-killing chemical, called dicamba.

As a result, starting this year, Sullivan got to spray dicamba on those soybeans. And he loves the results.

"Now we finally got a chemical [where] we can farm clean and be proud of our crop. And don't have these vicious pigweeds coming up," he says.

But there is a dark side of this weed-killing revolution, and David Wildy is living it.

"It's a real disaster," Wildy says. His voice sounds tired.

Wildy is well-known in Arkansas's farming community. He was named Southeast Farmer of the Year in 2016. This year, he planted the same soybeans that he has in previous years, not the new dicamba-tolerant ones. He didn't think he needed them.

But in midsummer, all across his farm, a strange thing started happening. Soybean leaves bent into cupped shapes. Plants stopped growing.

"My heart just came up in my throat, thinking, 'Oh my gosh, we've got a real problem,' " Wildy says. 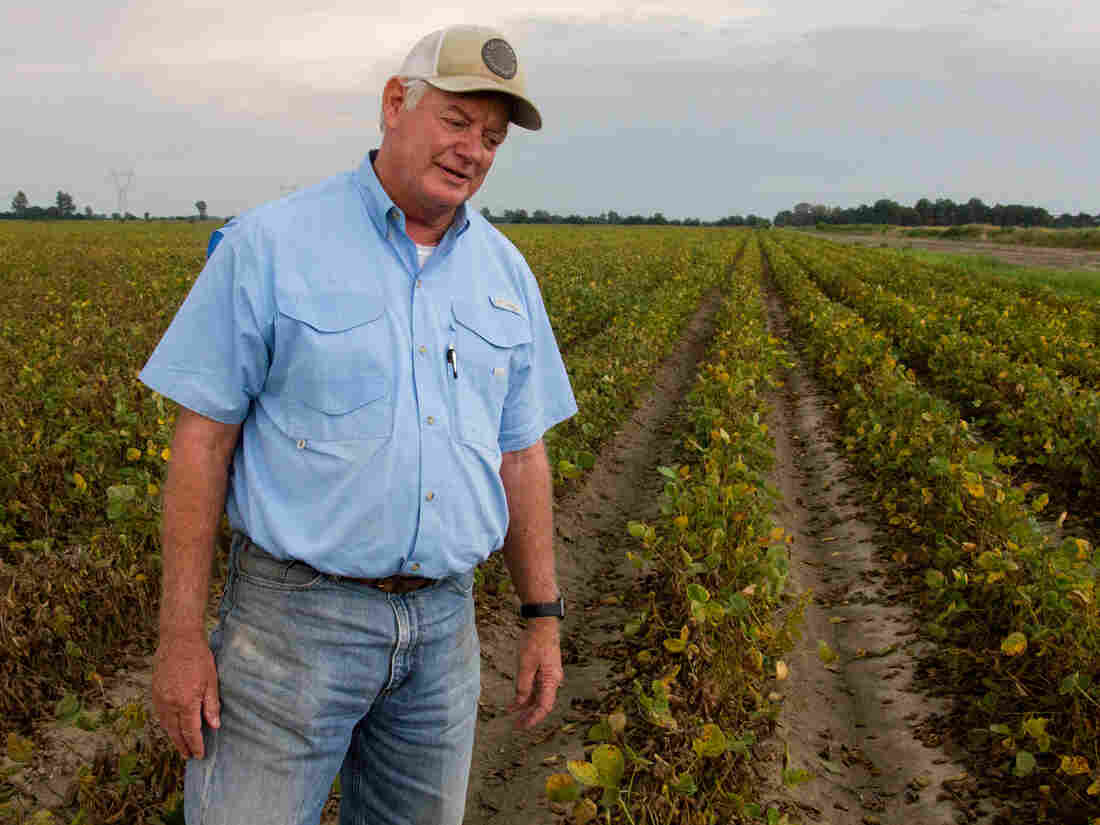 David Wildy, who farms near Manila, Ark., did not plant the new dicamba-tolerant soybeans. By midsummer, his plants were bent and stopped growing. Dan Charles/NPR hide caption 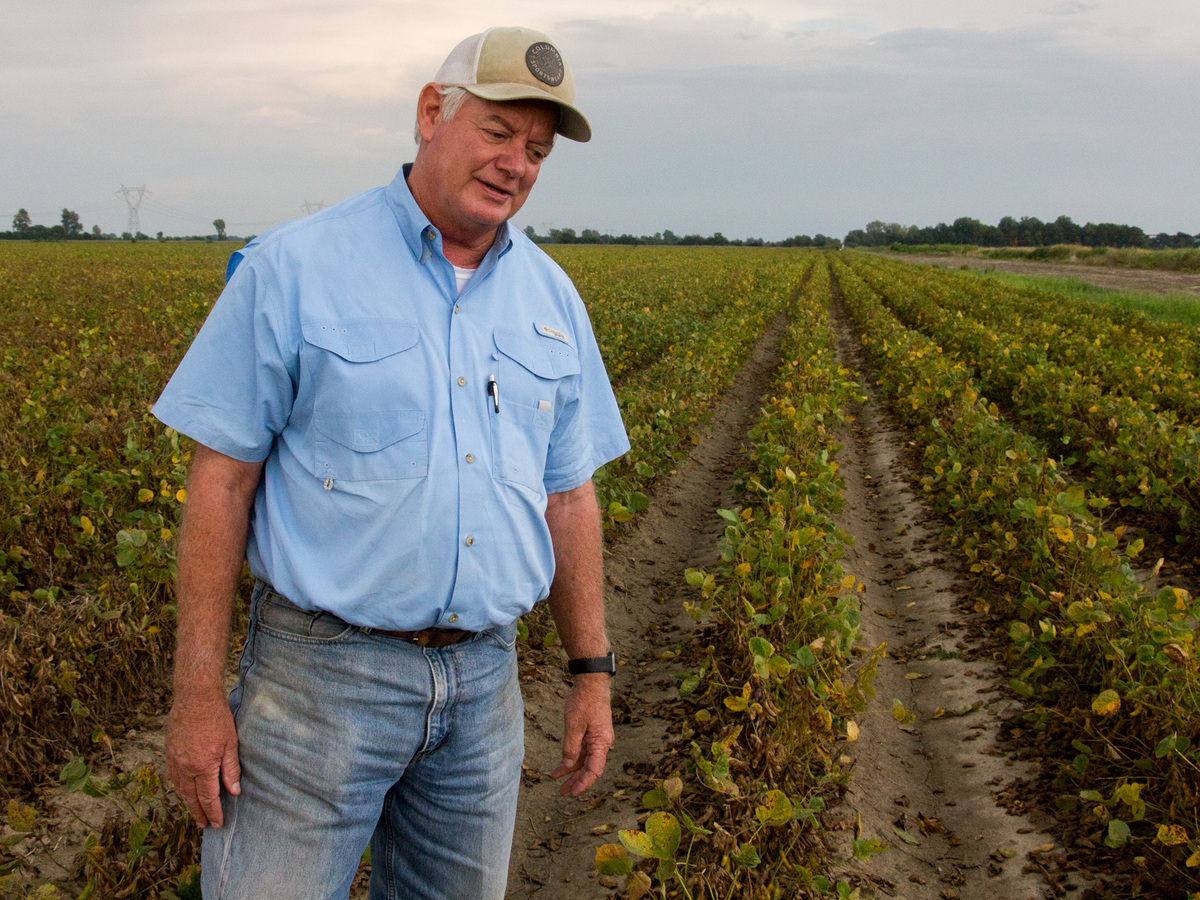 David Wildy, who farms near Manila, Ark., did not plant the new dicamba-tolerant soybeans. By midsummer, his plants were bent and stopped growing.

He was seeing the telltale symptoms of dicamba damage. Apparently, dicamba fumes had drifted into his farm from fields up to a mile away where neighbors had sprayed the chemical on their new dicamba-tolerant soybeans and cotton.

Herbicide drift is a familiar problem for farmers. What happened this summer, though, was unprecedented in its scale. Dicamba damage was reported all over the Midwest and mid-South, from Mississippi to Minnesota. Farmers filed thousands of complaints. They reported damage to tomato fields, watermelons, fruit trees and many other crops.

Farmers have used dicamba for many years. But this year, they used more of it, and they used it in a new way, spraying it over soybeans and cotton in the heat of summer, which can cause the chemical to vaporize from soil or leaves and drift away to damage other plants nearby.

Soybeans are especially sensitive to dicamba. Wildy says that every single soybean field on his farm — thousands of acres — showed some injury. A third of those acres were hit hard enough to reduce his harvest. He says it probably will cost him several hundred thousand dollars.

Just as upsetting is the loss of trust between neighbors, as farmers argue over who should pay for those damaged crops. 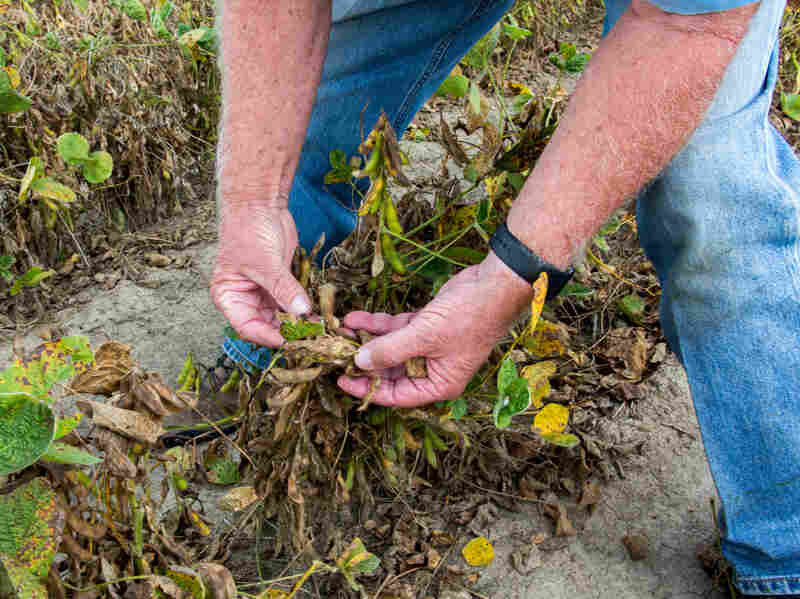 Damage to soybean plants and other crops has led to arguments and strain between neighbors. Dan Charles/NPR hide caption 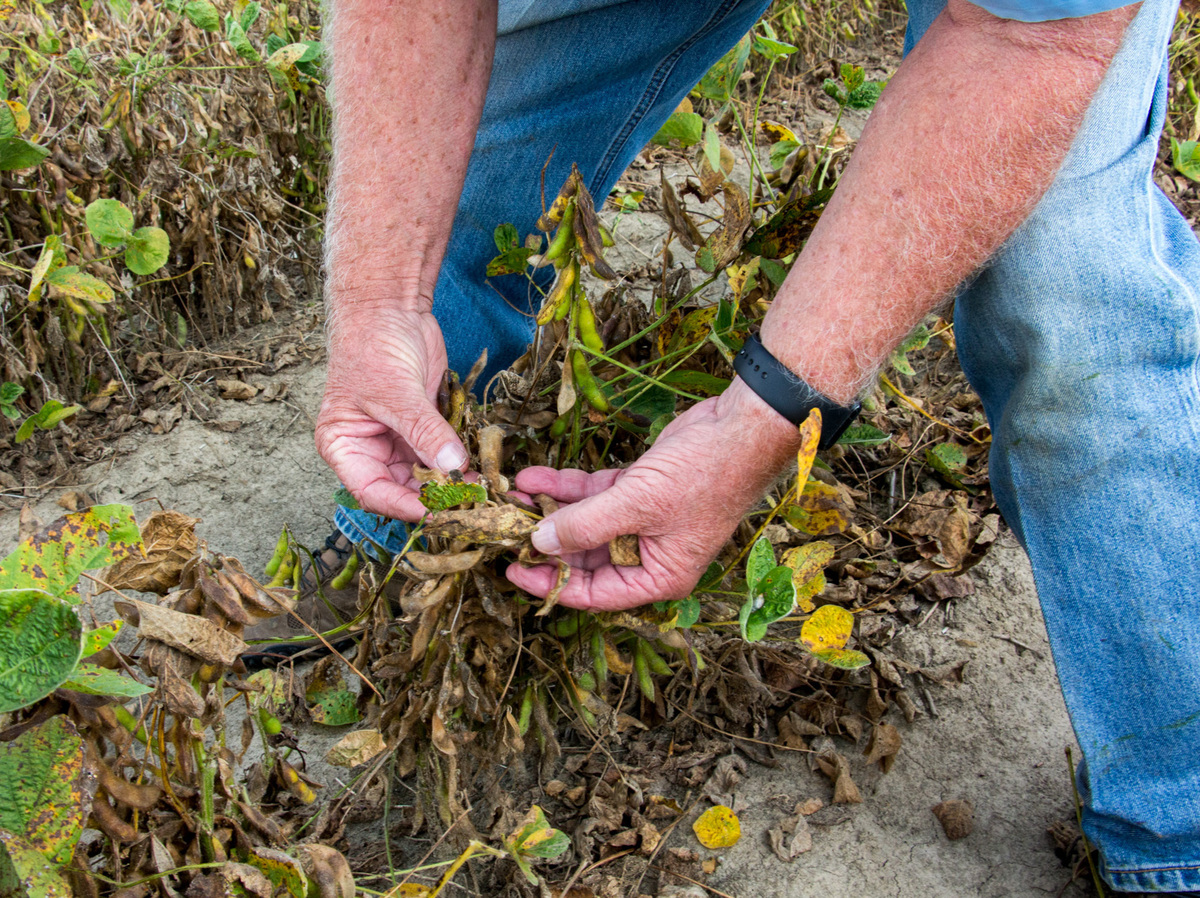 Damage to soybean plants and other crops has led to arguments and strain between neighbors.

One such argument led to a killing last year, and the horror of it still hangs over conversations about dicamba damage in northeast Arkansas. Mike Wallace, a farmer in Monette, Ark., had complained repeatedly about damage caused by a neighbor's dicamba use. At that time, the chemical was being used illegally. For reasons as yet unknown, Wallace arranged a meeting on an isolated back road with a man named Allan Curtis Jones, who worked on that farm. An argument broke out and Wallace was shot. Jones is awaiting trial for the killing.

"It's something that is so heartbreaking to me. I see farmers taking sides, and enemies being made," Wildy says. "It's a situation that is so catastrophic and appalling, I never would have thought that I would see something like this."

Sometimes, farmers can't tell where the wind-blown dicamba came from. In other cases, the source of the damage is clear, but farmers who sprayed it insist that they sprayed the chemical exactly as directed and refuse to accept responsibility for any damage.

Tom Burnham, a farmer near Blytheville, Ark., whose fields were damaged, says that some of his neighbors were helpful and reported the damage to their insurance companies, just as they would do if they were in a car accident.

"But there's some who were so nonchalant about the situation, so unforthcoming, I don't think those relationships will ever be repaired," he says. "As a human being, I can't trust someone like that."

Farmers also are battling over whether they'll get to use this weedkiller next year. David Wildy has taken a stand against further dicamba use.

"Regardless of how good it is, and how much I need it, if I can't keep it from damaging my neighbor, we can't use it," he says.

Michael Sullivan, meanwhile, the farmer with the pigweed problem, thinks that farmers have no alternative.

"The technology is too good to just trash it," he says. "Pigweeds are literally going to take the country over if we don't control them."

Sullivan thinks the problem of damaged crops can be solved. The benefits of dicamba-tolerant crops will be so obvious, he says, that almost all the farmers in his area will decide to plant them — which means that there won't be any vulnerable crops that dicamba would damage.

That might reduce the damage to crops, but the resulting free-fire zone for dicamba could be bad news for other vegetation, such as wildflowers and trees.

The wider ecological impact of dicamba drift received little attention at first. Richard Coy, whose family-run company manages 13,000 beehives in Arkansas, Mississippi and Missouri, was one of the few people who noticed it.

"If I were not a beekeeper, I would pay no attention to the vegetation in the ditches and the fence rows," he says. But his bees feed on that vegetation.

Coy takes me to a group of hives parked between an overgrown ditch and a soybean field, in an area where farmers sprayed a lot of dicamba this summer.

"Do you see this vine right here?" he asks. "The green one, [that] has little tags? Those tags should have been blooming during the month of July. As of today, they have not bloomed."

No blossoms means less pollen for his bees. Coy thinks that dicamba drift is the most likely explanation. Other plants nearby, such as a cottonwood tree, showed clear symptoms of exposure to dicamba.

Honey production at his site is down by 40 percent to 50 percent, Coy says. Across the region, in areas where farmers sprayed dicamba, honey production dropped by about one-third, on average. If farmers keep spraying dicamba, he says, he'll have to move his hives somewhere else.

But the fate of his business isn't as important as the fate of the environment. Dicamba exposure "affects "things that people are not even aware of," he says. "It affects the butterflies, and all pollinators. But all of these insects are in the environment for a reason, and they all have to be sustained for everything to work as it should."

Along the southern shore of Tennessee's Reelfoot Lake, a well-known state park, bald cypress and oak trees also showed symptoms of dicamba exposure this summer. Nathan Hoover, a forest health specialist with the Tennessee Department of Agriculture, called the damage "minor" and says he expects the trees to recover.

The U.S. Environmental Protection Agency and many states are taking a close look at dicamba use. Regulators in Arkansas have voted to ban most spraying of dicamba in the state next summer, but the governor and leaders of the state Legislature still need to sign off on it.