Accessibility links
The Politics Of Pizza: How Italy's Flag And Food Are Deliciously Intertwined : The Salt A nation's flag can help define its identity. But only one seems to intricately link the history and character of a people to their homeland's fare.

The Politics Of Pizza: How Italy's Flag And Food Are Deliciously Intertwined

The Politics Of Pizza: How Italy's Flag And Food Are Deliciously Intertwined 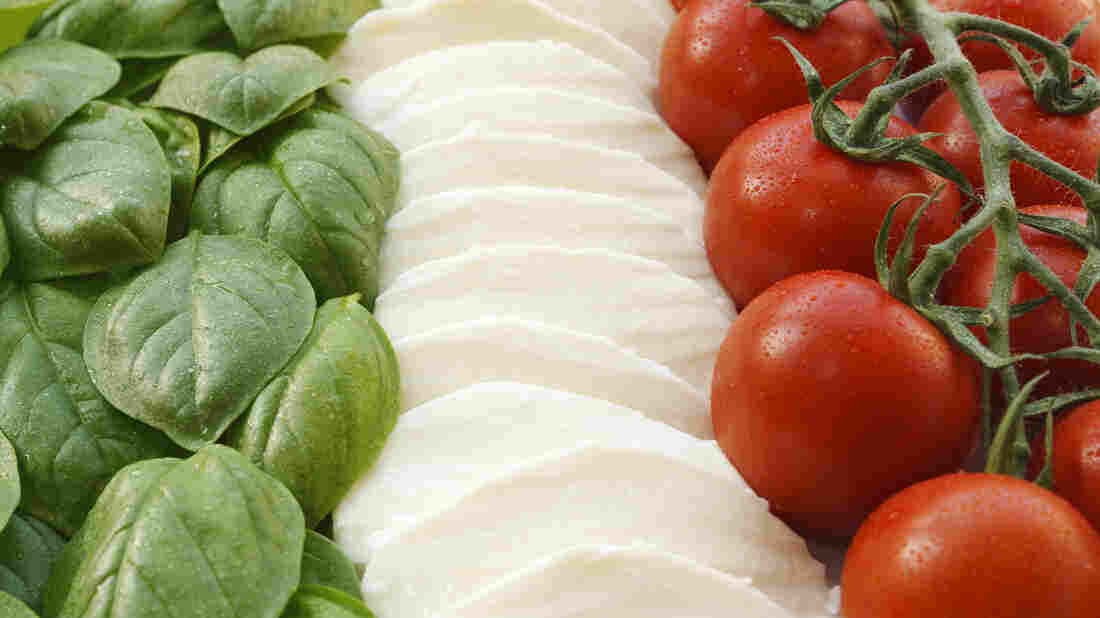 The Italian flag made up of three ingredients that help form the base of the country's cuisine: basil, mozzarella and tomatoes. Leon Goedhart/Getty Images hide caption 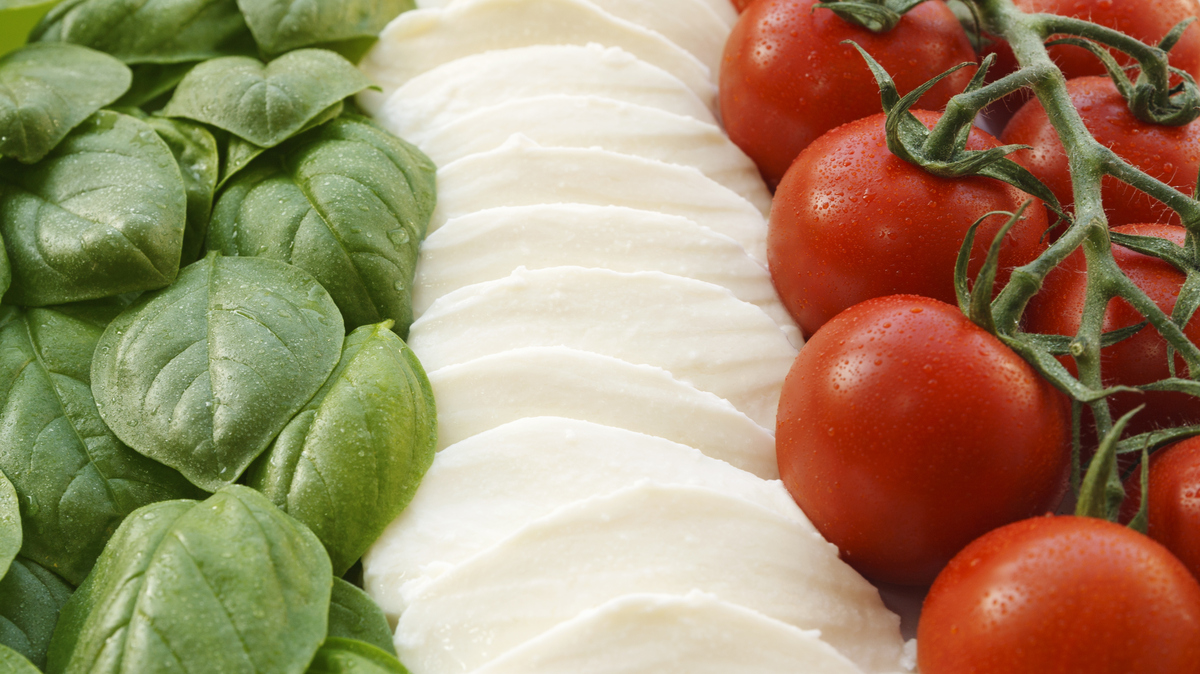 The Italian flag made up of three ingredients that help form the base of the country's cuisine: basil, mozzarella and tomatoes.

A nation's flag embodies a defining aspect of its identity. It could be related to geography (the rising sun in Japan), nature (the maple leaf of Canada or the cedar of Lebanon), religion (the Christian cross or the Islamic crescent and star), political ideology (the hammer and sickle) or mythology (the Welsh dragon).

In a new book on flags, A Flag Worth Dying For: The Power and Politics of National Symbols, Tim Marshall explores how a "piece of colored cloth" can arouse profound emotions of loyalty, love and pride in the breasts of its citizens. 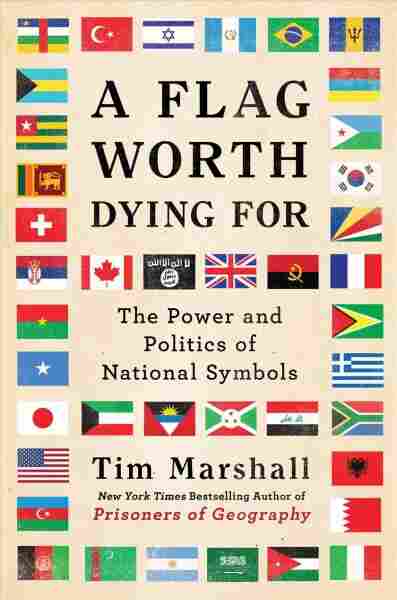 A Flag Worth Dying for

The Power and Politics of National Symbols

But of all the hundreds of flags that Marshall encounters, there is only one whose exuberant colors effortlessly evoke the nation's delicious cuisine: the Italian flag.

"I cannot see this gorgeous, clean, vibrant green, white, and red flag without thinking of food," he writes. "That it shouts, 'Pizza! Pasta!' from a million restaurants around the world is testament to the co-relation between the flag and the cuisine of the country."

Marshall's observations are scarcely new. Down the years, travel writers from Jason Epstein (This Side of Paradiso) to Fred Plotkin (Italy for the Gourmet Traveler), have written about how the Italian flag conjures up a whole range of green-white-and-red produce from sweet bunches of basil and flat-leaf parsley to wriggling bowls of pasta, milky white cheeses, ruddy hams and every kind of tomato. And, of course, when it comes to dishes, there is the iconic tricolore trio: Pizza Margherita, Caprese salad (both use mozzarella, tomatoes and basil) and Insalata Tricolore (which swaps the basil for avocado).

"The Caprese salad perfectly represents the colors of the Italian flag," says Italian-American chef Lidia Bastianich, who co-owns four restaurants in New York. "While I am not so sure that the colors of the flag stem from the cuisine, there is no denying that those colors do evoke a typical Italian plate."

Bastianich touches on something there. She is right in thinking that food did not influence the flag. But the flag has certainly influenced the food.

The most famous example is the Pizza Margherita, a pizza with political roots. The story goes that in 1889, when the new queen of Italy, Margherita di Savoia, visited Naples, a famous local chef created a pizza using ingredients to match the new flag.

"The queen diplomatically declared the flag pizza her favorite," writes John F. Mariani in How Italian Food Conquered the World. It was a winning move. After all, the unified Kingdom of Italy had been established barely three decades earlier and regional loyalties ran deep. Using a popular food to promote political cohesiveness was a masterstroke. The Margherita became all the rage in Naples and went on to become its best-known culinary export, as Neapolitan immigrants brought it to America's eastern cities.

Under Mussolini, Italy was presented with the "patriotic omelet." The Italian dictator backed a branch of his Fascist Party called the Rural Housewives, "whose zealotry," writes Mariani, "showed even in their recipes for dishes like a 'patriotic omelet' of eggs, greens, and tomatoes — the colors of the Italian flag." The recipe was published in the Housewives' newsletter for the benefit of its 3 million members, who were urged to whip up this omelet for their sons returning from war.

More recently, Italian-American chefs like Giada de Laurentis and Rachel Ray have run with the flag-and-food theme, coming up with playfully named recipes like Italian flag Bloody Mary and Italian Flag Halibut for Christmas. At innumerable Italian-themed buffets, food festivals and banquets, and all over Instagram and Twitter, ice-cream, pastries, salads and even entrees are arranged in green-white-and-red bands, such as at the 1984 Washington gala to honor the great tenor Luciano Pavarotti, where the menu included arrangements of watercress, cherry tomatoes and brie. 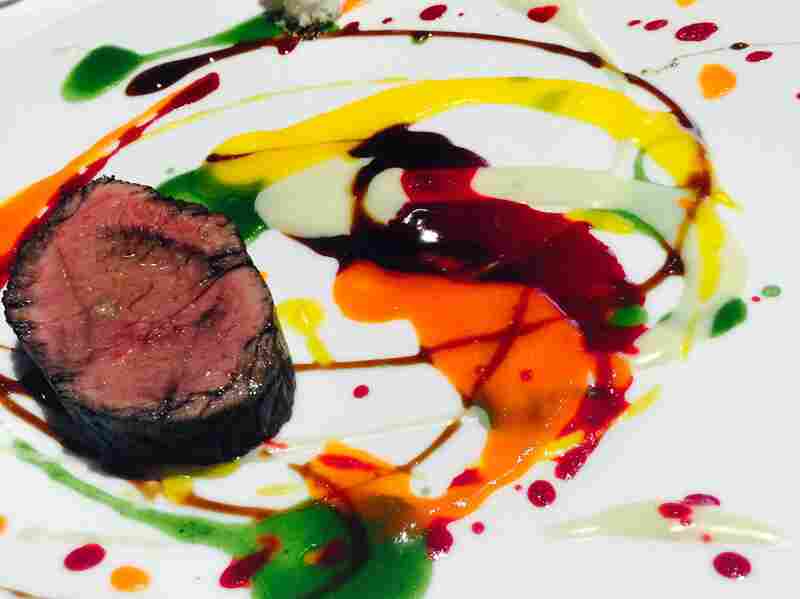 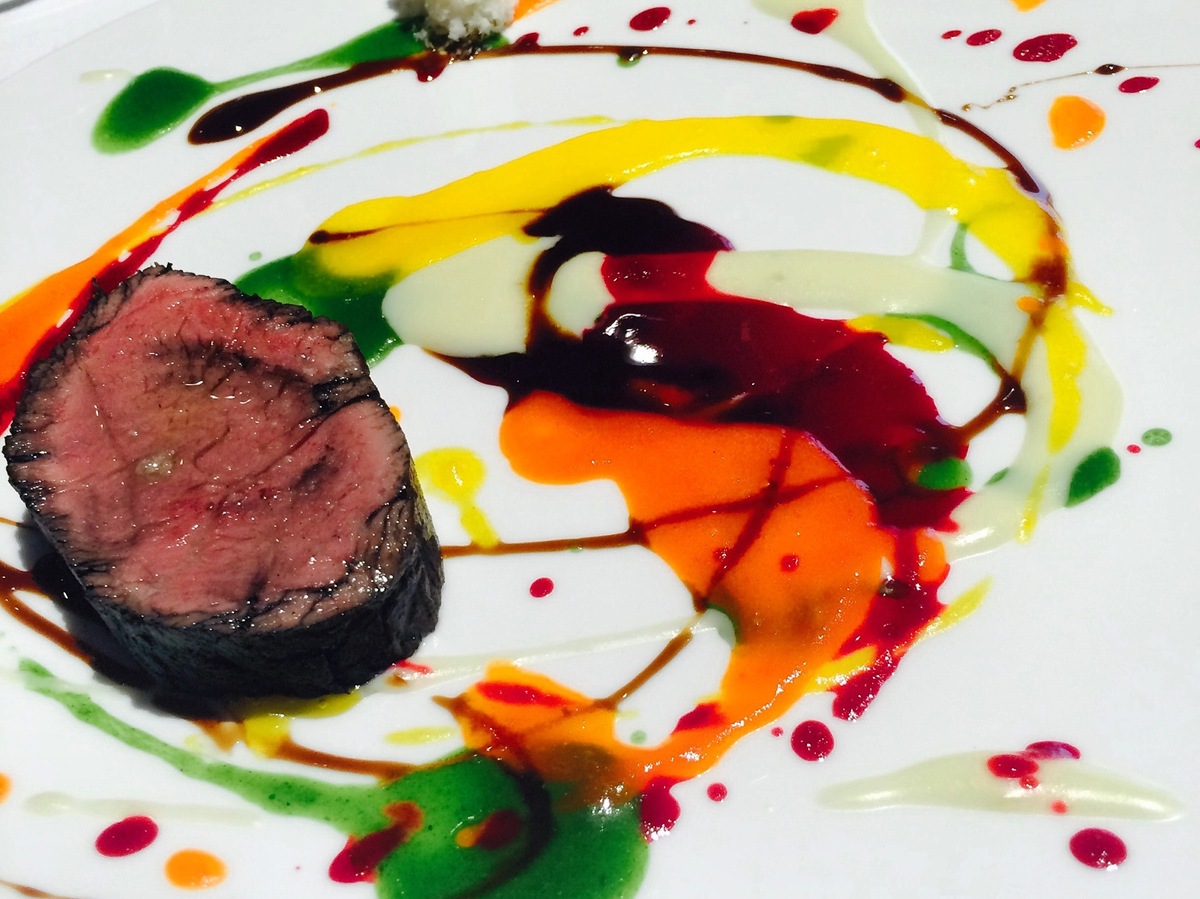 Sometimes, though, a too-rigid flag design (especially when it comes to salads), can rob a dish of its esprit. Instead, an abstract tangle of hues that evokes the idea of the flag rather than a simulacrum of it has a more appealing aesthetic.

A good example of this is a dish served at Osteria Francescana, Massimo Bottura's three-Michelin-starred Modena restaurant, which topped last year's list of The World's 50 Best Restaurants. The dish, "Beautiful, psychedelic, spin-painted veal, not flame grilled," consists of a plummy cut of beef (not veal) surrounded by artful swirls of green chlorophyll, a white sauce made of mashed potato with olive oil, a sour cherry sauce and a balsamic vinegar demi-glace.

Even nicer, though, is when the national colors pop up naturally on a plate without too much fuss. Jason Epstein captures this spontaneity in his Tuscany essay, This Side of Paradiso, when he wittily describes his dinner companion's plate of pasta:

"The pasta, under its sauce of clams, squid, and mussels, with a sprinkling of diced tomato and a shower of parsley, looked like an Italian flag that had been abandoned on his plate by a fleeing army."

What about other flags and food? The Union Jack, for instance, does not immediately trigger images of bangers and mash or fish and chips. Not even when it famously became martyr to a misprint in a WWII-era newspaper run by two eccentric English sisters, who ran the sizzling headline: "The Balkan Herald Keeps the British Flag Frying."

"Chinese restaurants tend not to have the red flag and the hammer and sickle flying outside to entice you in," writes Marshall, "and spotting the flag of Tunisia doesn't make you think of heading home to whip up the national dish of couscous." In Denmark, the Dannebrog can be found in butchers' shops and on packets of ham, bacon and cheese — but on its own, the red flag with its white Scandinavian cross is unlikely to suggest pastry.

The Stars and Stripes, however, can be evocative of food, says Marshall. "But it's not used for 'high cuisine.' When you see it on a diner/café/burger joint — it adds to the feeling of Americana, and you just know you're about to be assaulted, in a very satisfying way, by salt, sugar and all the wrong sort of fats."

The global appeal of Italian food is a testament to the country's soft power. "I would like to make clear I don't reduce a nation down to its cuisine," says Marshall. "There's a lot more to Italy than food, but I seek to explain how to so many of us, the flag evokes la dolce vita, and so much of that is tied up with food and communal eating."

Italians offer various unofficial explanations for the flag's colors, says Marshall. "Red, the usual blood spilled for independence; green for the verdant landscape; and white for the Alps." But, he continues, "meaning lies in the eye of the beholder, and this writer beholds avocado, mozzarella cheese (buffalo, naturally), and tomatoes. Salute!"