Accessibility links
Historical Veggies Take Root In DC War Garden : The Salt To commemorate 100 years since the U.S. entered WWI, the gardens outside the Library of Congress have been transformed into a traditional war garden — producing heirloom vegetables of the past. 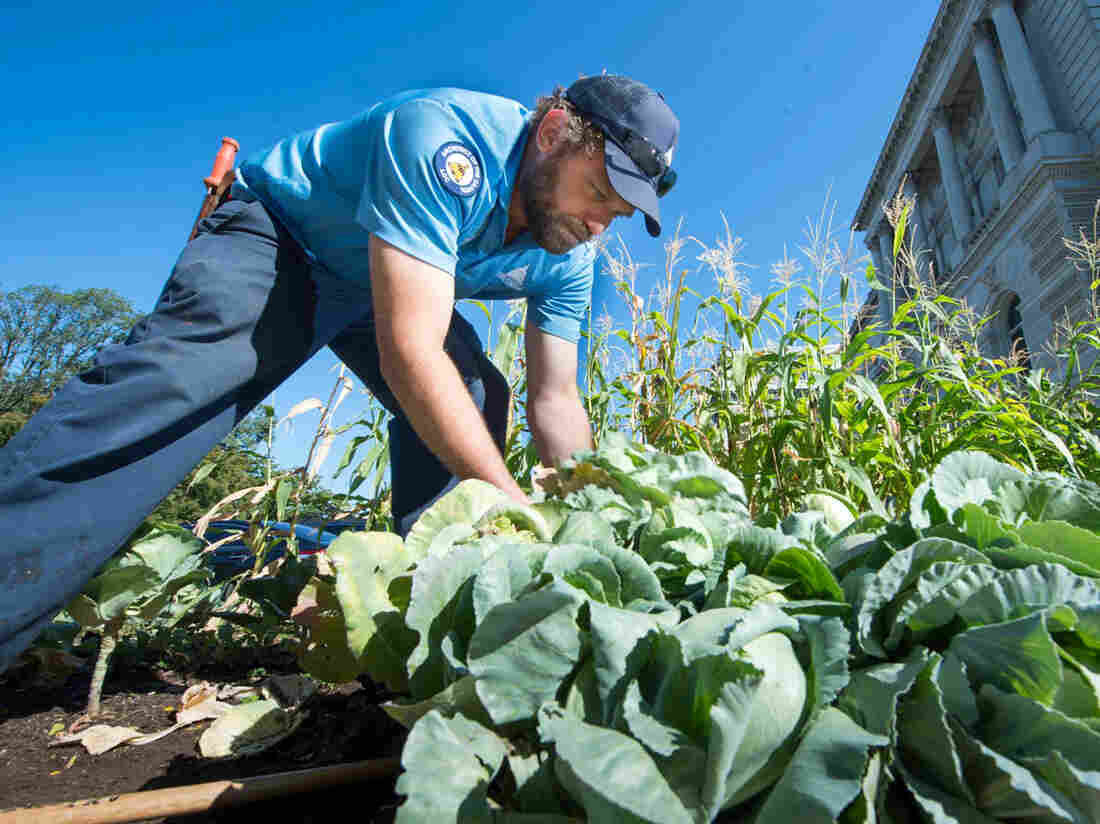 Rob Gimpel tends to the war garden at the Library of Congress. Flickr/U.S. Capitol hide caption 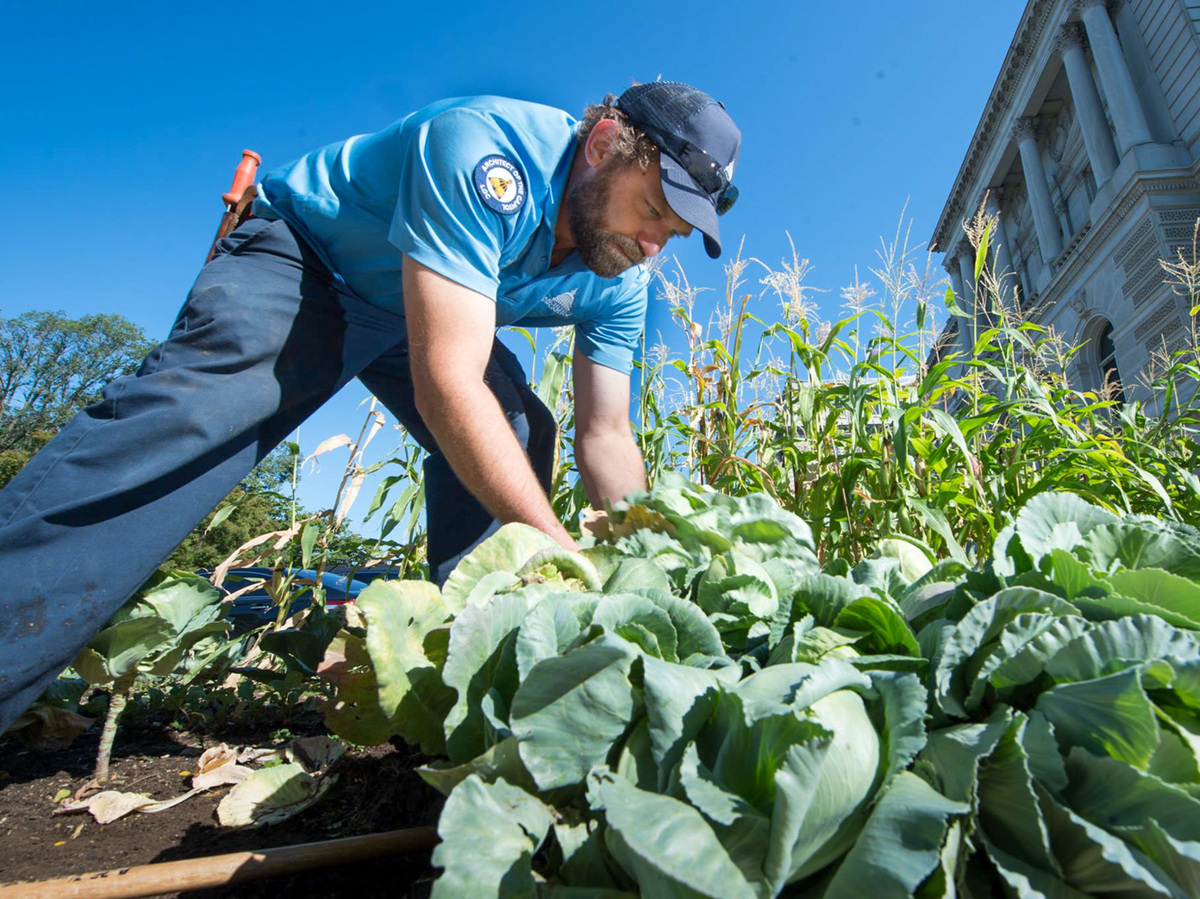 Rob Gimpel tends to the war garden at the Library of Congress.

Rob Gimpel is usually thinking about getting tulip bulbs in the ground this time of year, but right now he's ready to harvest pumpkins.

It's an unusual activity for Gimpel, the lead gardener of the areas around the Library of Congress in Washington, D.C., but one that he's been thoroughly enjoying as part of this year's War Garden project. The project commemorates the 100th anniversary of the U.S. entering World War I in 1917 — when such veggie plots — also referred to as "victory" or "liberty" gardens — were first conceived as part of the war effort on the homefront.

The concept for the project began to grow last year, when the Capitol's director of visitor services, Giulia Adelfio, asked Gimpel if he would be interested in re-creating period vegetable gardens as part of the war's centennial commemoration. Gimpel was game — and spent the winter months poring over seed catalogs in search of heirloom vegetables to start in the spring.

"We had very detailed pamphlets in the archives," says Gimpel, "so that gave me a place to start looking. Then I'd sit at home at night, hunting through the catalogs, thinking, 'I need to find a bean cultivated before 1917.' "

Prompted by President Woodrow Wilson's declaration, "Food will win the war!" war gardens originally began sprouting up in both the United States and Canada in 1917 as a response to widespread food shortages in Europe, where agricultural fields had been devastated by the fighting. 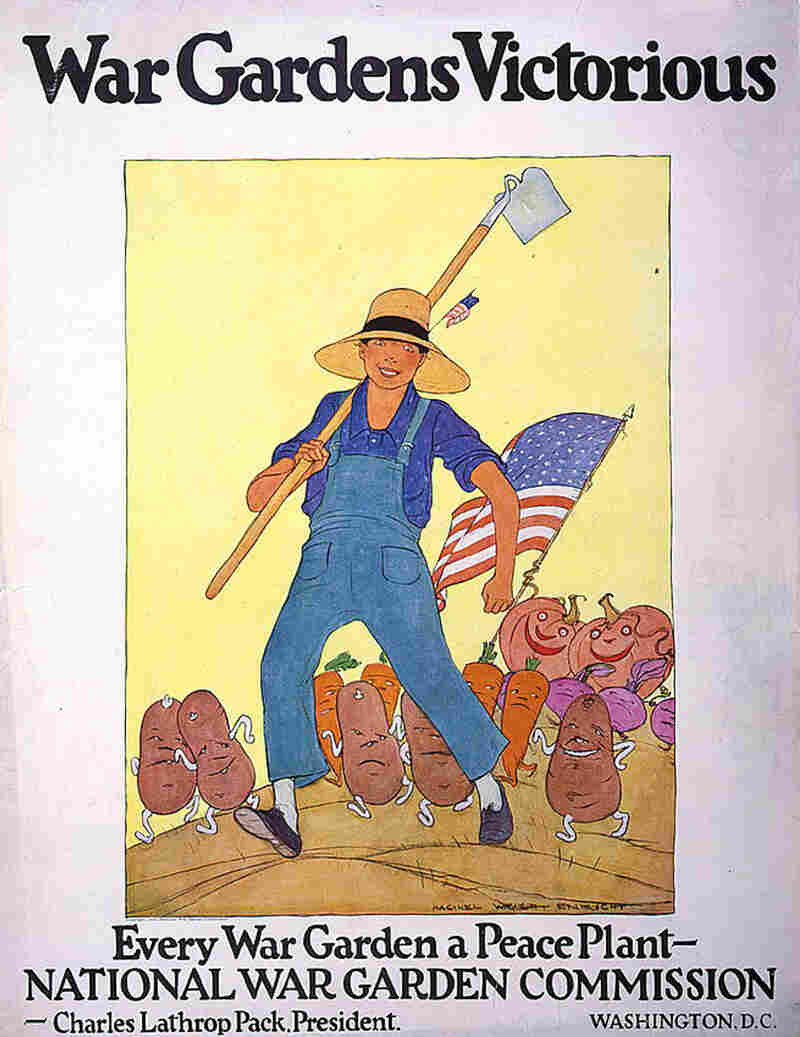 Even children were recruited to the effort as part of the United States School Garden Army, where they were called "Soldiers of the Soil."

Pamphlets describing detailed gardening plans boldly propagandized: "The hoe in the backyard is mighty good for backing the flag on the front porch." Such rhetoric helped spur millions of Americans who had never even seen a hoe to take to the earth in empty lots in cities across the country. Minneapolis alone was home to some 10,000 war gardens — which grew half a million pounds of produce by July 1918.

When planning the Library of Congress' modern war gardens in a well-trafficked tourist area of Capitol Hill, it was important to consider both form and function.

"It had to be a display garden first and a productive garden second," says Gimpel. "Traditionally, these are areas where I'd have an annual display of flowers — liriope, celosia and so forth — and ornamental trees like weeping cherry. Now we're showcasing kohlrabi and Swiss chard, so we had to put a lot of thought into what these plants would look like."

Detroit Dark Red beets, introduced in 1892, Long Narrow Cayenne pepper, circa 1827, and 1902's Golden Bantam corn are just a sampling of the historically accurate veggies that have been found in the gardens during the past few months. More than 400 pounds of the fresh produce has been donated so far to DC Central Kitchen, a local food bank. 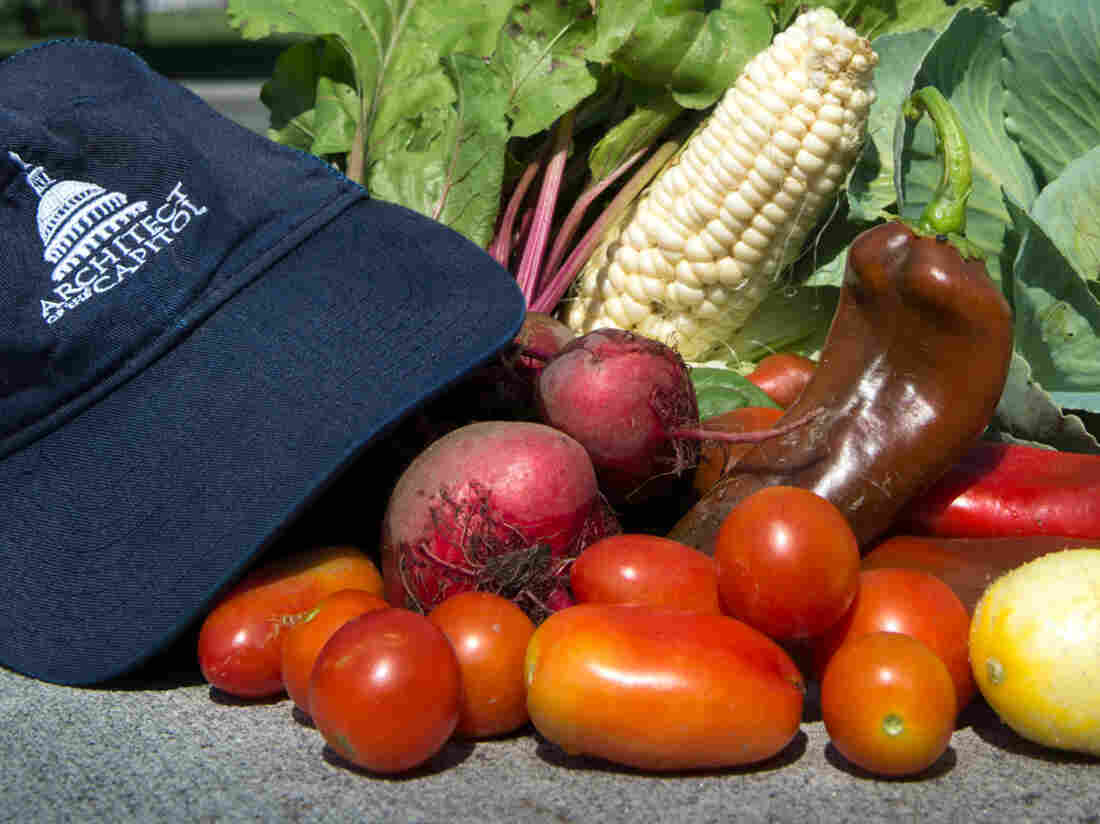 Some of the traditional vegetables grown at the commemorative war garden at the Library of Congress. Flickr/U.S.Capitol hide caption 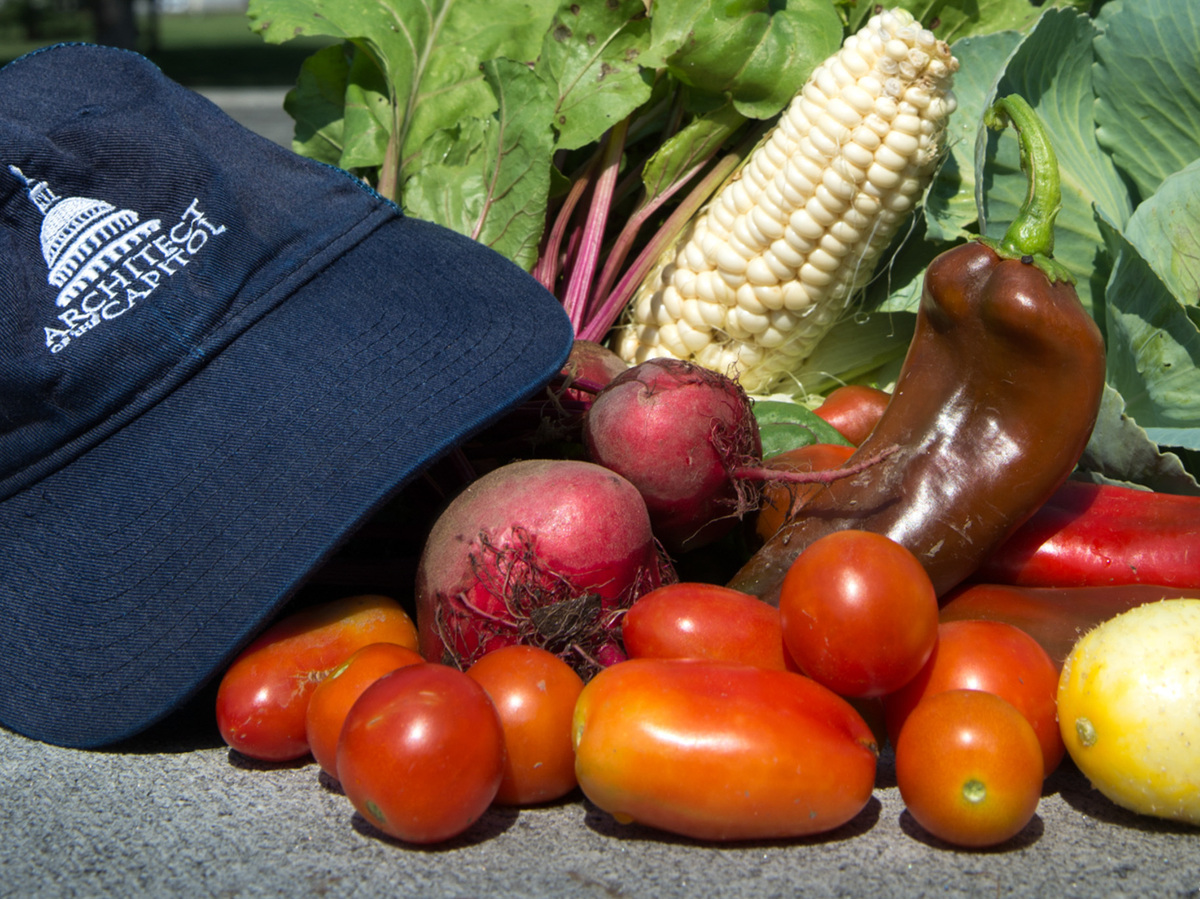 Some of the traditional vegetables grown at the commemorative war garden at the Library of Congress.

Although not historically accurate, Gimpel says he couldn't resist growing a giant pumpkin, saying: "The giant pumpkins weren't around yet for the war gardens, so I fudged that one, but I just really wanted to grow it anyway." Pie pumpkins have been more common to grow, traditionally.

Besides looking for period plants, Gimpel also worked to use many of the same gardening methods illustrated in periodicals from the time, such as favoring wood tripods over metal trellises and observing seeding methods of the time.

The trickiest part turned out to be pest control.

"Honestly, they used some nasty stuff back then," Gimpel says, "like arsenate of lead. So we focused on natural pest control like companion planting, putting marigolds in with the tomato plants, and just pulling bugs off the plants by hand."

While people haven't been a threat to the gardens, furry pests have: At night, something is nibbling on tomatoes and other tasty treats. The gardening team guesses rats are the culprit — D.C., like many cities, has a booming rat population — although the Capitol grounds are also home to numerous other critters, including squirrels, raccoons and even the occasional fox.

Gimpel has been surprised by the amount of attention that the war gardens have received.

"It's actually been hard to get work done sometimes, because people are so excited about the gardens when they walk by," he says. "So they really want to ask questions, which is a new experience for us. Most of the time, when we're displaying flowers, people just say it looks nice and keep going."