Accessibility links
Invasive 'Devil Fish' Plague Mexico's Waters. Can't Beat 'Em? Eat 'Em : The Salt The armored catfish erodes shorelines and devastates marine plants — and its numbers have exploded. So researchers, chefs and fishermen are trying to rebrand it by promoting its flavor and nutrition. 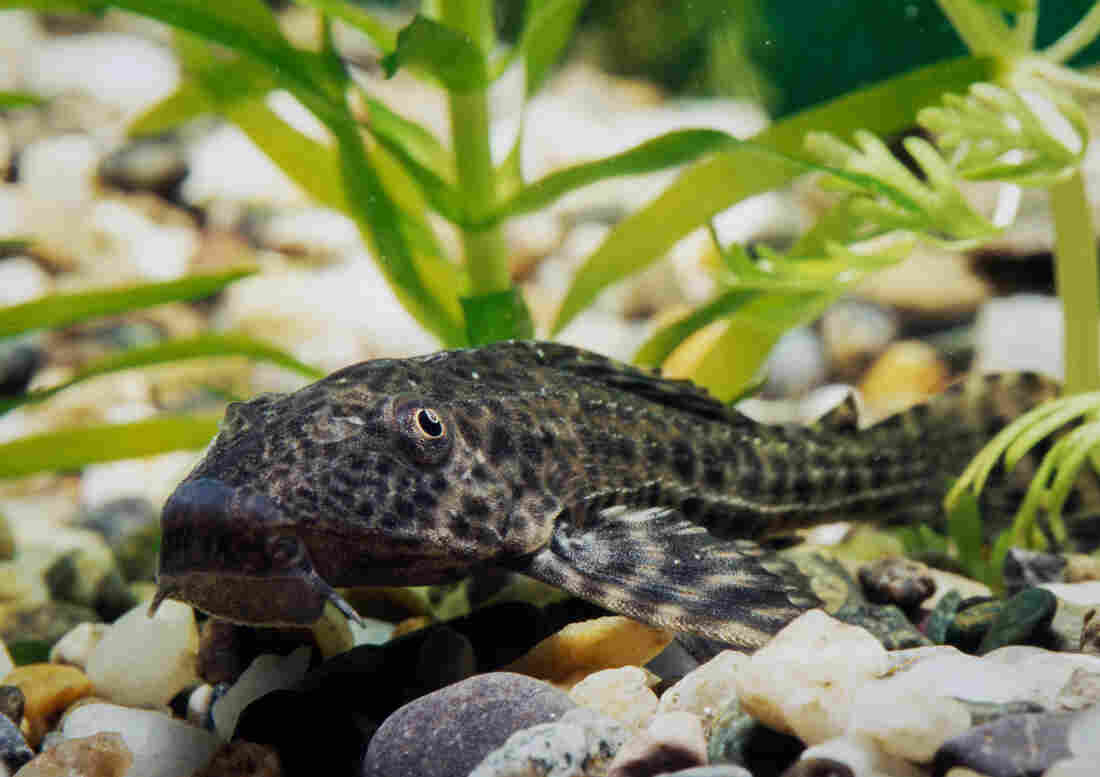 In trying to get people to eat the Pez Diablo, or suckermouth catfish, sustainable fisheries specialist Mike Mitchell says it isn't "a problem of biology or science, but marketing." DeAgostini/Getty Images hide caption 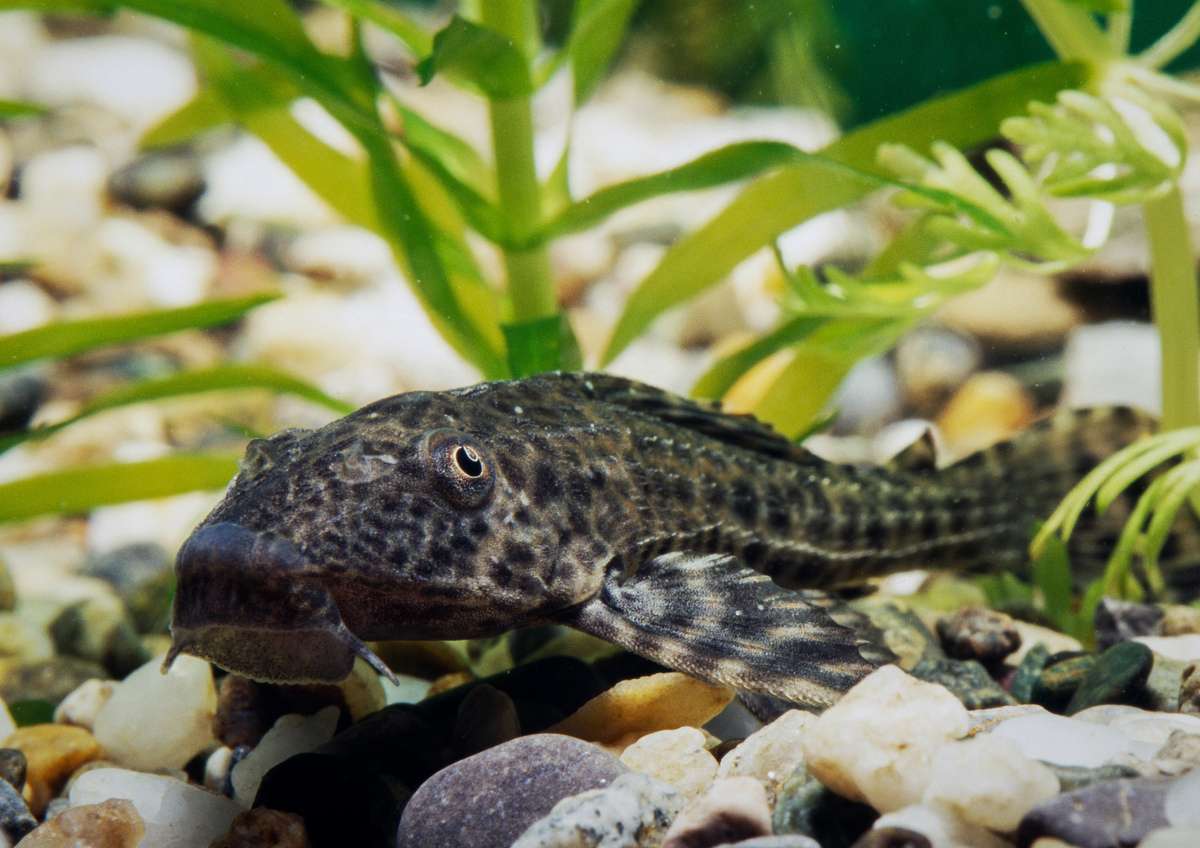 In trying to get people to eat the Pez Diablo, or suckermouth catfish, sustainable fisheries specialist Mike Mitchell says it isn't "a problem of biology or science, but marketing."

Pez diablo: "devil fish." That's what locals in the Mexican state of Tabasco call the armored catfish that has invaded their waters.

Also known as suckermouths, the species is popular with aquarium owners because the fish eats the algae that pollute tanks. But in the wild, that same behavior erodes shorelines and devastates underwater plant life.

A Mexican social enterprise called Acari is trying to do something about it — by creating a taste for these aquatic terrors.

Francisco Mendoza, a 38-year-old fisherman from the village of Simón Sarlat in Tabasco, has fished in the region's lagoons and streams since he was 15.

"We didn't even know the fish before," Mendoza says. Róbalo, or snook, used to be abundant. Those are nearly gone, their marshy habitat taken over by the invasive pez diablo.

A fish that's a survivor

No one knows for sure how suckermouths became such a problem, but they now plague Texas, Florida and southern Mexico. It may be the "Nemo effect" — that fish prized for cleaning aquariums grew too big for their tanks and were set free in the wild. Others believe that aquaculture facilities inadvertently released them. It's likely a combination. But once in the waterways, their population exploded. The pez diablo matures rapidly, lays 500 eggs at a time and lives seven to 15 years. It is encased in hard scales, and can breathe outside water for up to four hours. In other words, it is a survivor.

Sustainable fisheries specialist Mike Mitchell also grew up fishing, and when he took an environmental science class in high school, something clicked. Learning about the efficiency of producing fish compared to other animal sources of protein, "I saw the viability of fish to feed the world's population," he says.

So, in 2014, with a degree from the University of Pennsylvania and several years of working in Latin America under his belt, Mitchell applied for a Fulbright research grant with a proposal to analyze freshwater fishing in Mexico. When he started his research in Tabasco, he talked with countless fishermen, who kept asking: "What the heck am I going to do with the pez diablo?"

Mitchell checked out what was already known about the fish, particularly the research of Salomón Páramo-Delgadillo of the University Juárez Autónoma de Tabasco (UJAT). Mitchell's first plan of attack was to turn the pez diablo into fish meal. He says that effort turned out to be "incredibly tedious, low yield, and not sustainable."

Plan B was to eat the fish. "I thought about Chilean sea bass," Mitchell says. "It used to be called the Patagonian toothfish, and it's a slimy creature." But, rebranded, Chilean sea bass became a delicacy, found on the menus of upscale restaurants around the globe.

Locals believed the pez diablo to be poisonous, but Páramo-Delgadillo's research verified that is not the case. "Salomón showed me how to fillet the fish, so I did a couple of taste tests with other junior researchers in the lab," Mitchell said.

The flavor is similar to other mild freshwater fish. "It wasn't a problem of biology or science, but marketing," Mitchell eventually concluded. "Let's not reinvent the wheel. Let's just fillet it, change the name and call it a day."

"It has been incredibly difficult," Mitchell admits. He refers to the fish as acari, the name used in its native Brazil, but others keep calling it pez diablo. Getting people to cook it was as difficult as convincing them to call it acari. It would take more than a couple of university researchers to sway public opinion.

It wasn't until Mitchell sat down with chef Lupita Vidal that he found a taker.

Vidal and her husband, photographer Jesus David, own La Cevichería Tabasco, a restaurant in the state's capital of Villahermosa. The eatery is more than just a business for them.

"We believe that through gastronomy and art, great social changes can be generated," Vidal says. On the menu are ceviches, tacos, tostadas and seafood plates, all of them sourced locally. "More than just filling bellies and hearts, my dishes have a cause and a conscience."

Vidal developed a fish burger of pez diablo and in May 2016 added it to her menu. "There were people who wrote us on social media saying that they would never return to our restaurant because we served that species. But together with Mike, we believe that it is just a matter of time, patience and perseverance for this fish to be accepted."

With his first buyer lined up, Mitchell officially established Acari, which he describes as a small business that applies a market-driven approach to improving both the environment and the well-being of fishermen and others in the region.

At the start, Vidal sold one fish burger per week. Now customers order 15 or 20 in the same amount of time. The fish is as nutritious as it is delicious, packed with protein and omega 3 fatty acids.

Victor Hernandez was one of the initial non-believers. Now a third-year biology student at UJAT, he attended one of Mitchell's workshops on the pez diablo. He says, "My family fished in the rivers, and were always talking about the pez diablo. I thought, 'I have to get involved!'" He joined forces with Mitchell, but still hesitated when tasting time arrived.

"I hadn't eaten the fish before. I was the last one — I didn't want to try it," Hernandez says. "Then I tasted the fish burger and ... wow! It was súper rico." Totally delicious.

Next on the horizon

However, it will take a lot more than 20 burgers a week to make a dent in the pez diablo problem. Since founding Acari, they've sold around 450 kilos of fish fillets. The yield of fillet is only about 20 percent per fish, meaning that Acari has removed roughly 2,500 kilos of fish from local waters. Although the local government is supporting Acari's efforts, the stigma of the fish remains high, and Vidal remains the only chef in Tabasco offering pez diablo on the menu. Acari has had more success outside of the state: It currently supplies two more restaurants, and as of this month has begun deliveries to Google in Mexico City.

In addition to finding corporate customers, Acari hopes to help some of the most marginalized in the community through donations of the fish. An estimated 450,000 migrants and refugees enter Mexico from Central America every year, fleeing violence in their home countries. Acari developed fish croquettes to donate to the migrants, but soon realized that a shelf-stable product would be more useful. They are now perfecting a fish jerky.

And rather than outsourcing production, fishermen like Mendoza have been taught to fillet and package the fish, earning around double what they used to take in for fishing alone. According to Mendoza, the pez diablo "might be a plague, but for us it is an economic benefit."

The fish is a devil of a problem. But Acari looks poised to outwit it.