Accessibility links
In New Cookbook, Acclaimed Indian Restaurant Finally Spills Its Secrets : The Salt Rasika, a top eatery in Washington, D.C., is famous for its crispy spinach and modern twists on classic dishes. Now the owner and chef are sharing some of their prized — and adventurous — recipes. 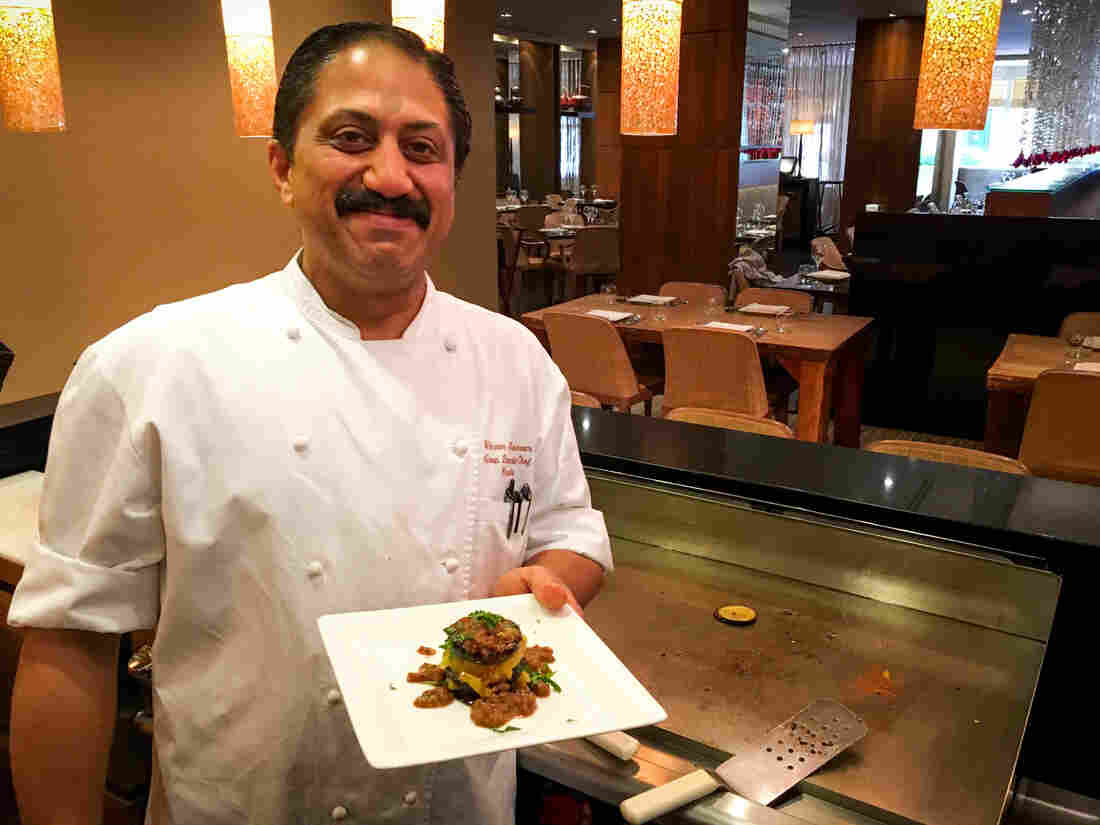 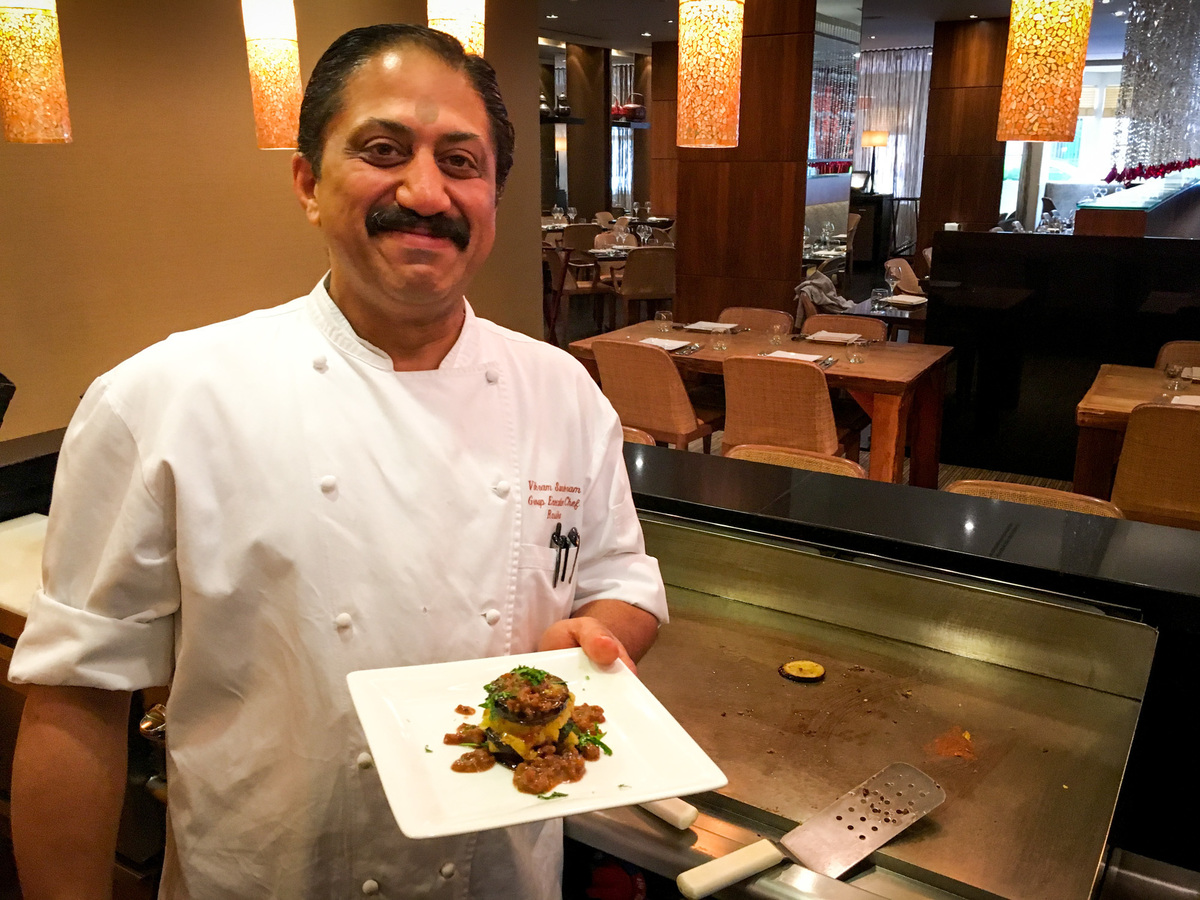 Rasika chef Vikram Sunderam, here with a towering dish of eggplant and potato, says, "Indian cuisine is a very personal cuisine. It's made from family to family, how they like to cook."

Rasika, an Indian restaurant in Washington, D.C., has won just about every recognition possible. The Washington Post called it the No. 1 restaurant in the city. The chef has won a James Beard award — basically the Oscars of the food world. President Obama celebrated his birthday there — twice. And though the place has been open for more than a decade, it is only just now coming out with a cookbook. 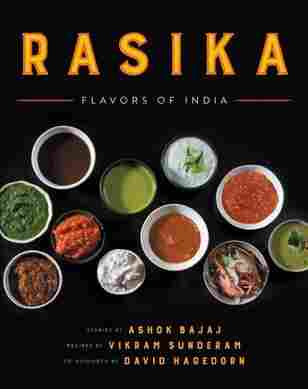 Rasika's owner, Ashok Bajaj, has run high-end restaurants in Washington since the 1980s — places where you might spot a senator or even the president. He had a fancy Indian restaurant in London, called Bombay Brasserie, but when he first tried to do something similar in D.C., he ran into walls. Every landlord told his location scout, "We don't want our lobby to smell like curry."

"And I would say, put me in front of the landlord, let me talk to them," Bajaj says. "It is no different than an Italian restaurant or an American restaurant, where you use a lot of garlic and other spices. And see how the cuisine has changed now? In most American restaurants, they use Indian spices."

Rasika takes a modern approach to traditional Indian flavors. The cookbook, Rasika: Flavors of India, has recipes for Kerala bison and rhubarb chutney. Traditional flavor combinations get a modern twist. A classic dish of eggplant and potatoes comes stacked in an elegant tower.

One trick of the cookbook is that a lot of stuff can be made in advance: Marinade the eggplant, mash the potatoes, simmer the sauce. When it's time to actually make dinner, it just takes a few minutes to heat and assemble everything.

But Rasika's most popular dish, palak chaat, needs to be prepared the moment before it's served. Palak means spinach. Chaat is a Hindi word for a bunch of different flavorful snacks. The restaurant has never revealed the recipe for the famous crispy spinach.

Chef Vikram Sunderam says they were always waiting for the cookbook.

And in the Rasika kitchen, he agrees to show us.

"The most important step in the dish is the frying," Sunderam says, explaining that the oil needs to be exactly 400 degrees — more and the spinach will burn, less and it'll get greasy.

Mississippi Masala: How A Native Of India Became A Southern Cooking Star

He also makes a beautiful yellow-orange batter with gram flour, turmeric and chili powder. He pours this over the spinach, almost like a salad dressing, and lightly tosses it. Once the spinach is perfectly crispy, it gets a cascade of toppings, including roasted cumin powder, chili powder and black salt; drizzles of yogurt and tamarind chutney; and sprinkles of chopped red onion and tomatoes. The restaurant makes about 200 bowls of this a day — every other table orders it.

Sunderam tried to do something similar at a London restaurant, but it wasn't a hit. "It wasn't as popular as it is here," he says. "From day one it took off."

"I think Americans are more adventurous," he says. "They're more appreciative of the food and dishes like these, which are different." 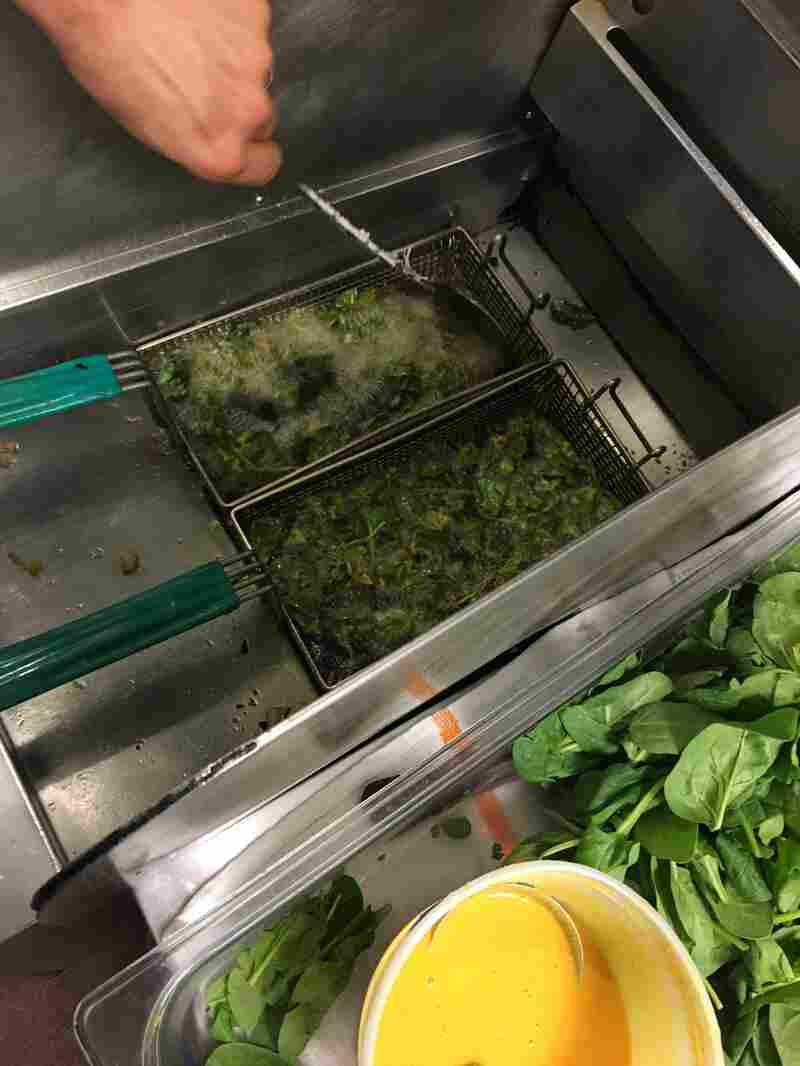 On any given day, about half of the restaurant's patrons orders one of Rasika's specialties, palak chaat, or crispy spinach. The secret is in the frying, says Sunderam. Ari Shapiro/NPR hide caption 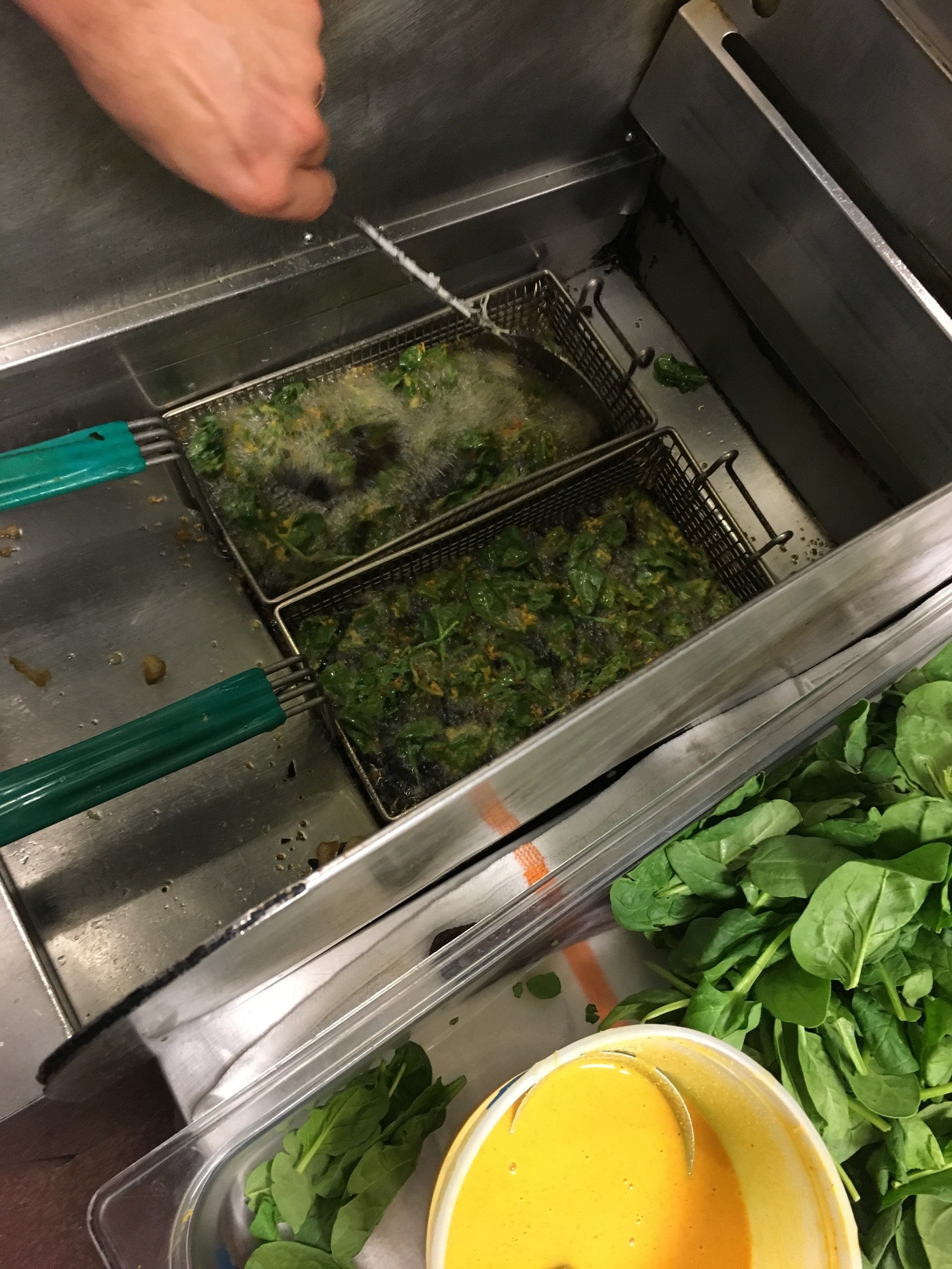 On any given day, about half of the restaurant's patrons orders one of Rasika's specialties, palak chaat, or crispy spinach. The secret is in the frying, says Sunderam.

And in Indian cuisine, there is plenty of room for adventure and creativity. "Indian cuisine is a very personal cuisine. It's made from family to family, how they like to cook," says Sunderam. "So there is the basic foundation of a dish, but it's always personalized."

Of course, the sheer number of ingredients in Indian recipes can be daunting to home cooks. But Bajaj says it isn't difficult if you have the right pantry at home. Sunderam agrees, pointing out that the book helps with setting up an Indian pantry, with basic spices like cardamom, cloves, cinnamon, coriander, turmeric and cumin — all of which are widely used in Indian recipes.

Says Bajaj: "Don't be afraid of the spices!"

Bajaj says the acceptance of Indian food is generally much wider than it used to be when he opened his first restaurant more than 25 years ago. He credits this partly to the explosion of the Internet, but also says that many people are now traveling to India and coming back with a new appreciation for the cuisine.

And he says that younger generations are more open to trying foods of other cultures. "They want to have an experience, and it doesn't have to be a French cuisine, or American or Italian. It can be any cuisine, as long as it has the flavor and the taste — the whole package is there."