Scientists have used a new gene-editing technique to create pigs that can keep their bodies warmer, burning more fat to produce leaner meat. Infrared pictures of 6-month-old pigs taken at zero, two, and four hours after cold exposure show that the pigs' thermoregulation was improved after insertion of the new gene. The modified pigs are on the right side of the images. Zheng et al. / PNAS hide caption

Scientists have used a new gene-editing technique to create pigs that can keep their bodies warmer, burning more fat to produce leaner meat. Infrared pictures of 6-month-old pigs taken at zero, two, and four hours after cold exposure show that the pigs' thermoregulation was improved after insertion of the new gene. The modified pigs are on the right side of the images.

In a paper published Monday in the Proceedings of the National Academy of Sciences, the scientists report that they have created 12 healthy pigs with about 24 percent less body fat than normal pigs.

The scientists created low-fat pigs in the hopes of providing pig farmers with animals that would be less expensive to raise and would suffer less in cold weather.

"This is a big issue for the pig industry," says Jianguo Zhao of the Institute of Zoology at the Chinese Academy of Sciences in Beijing, who led the research. "It's pretty exciting." 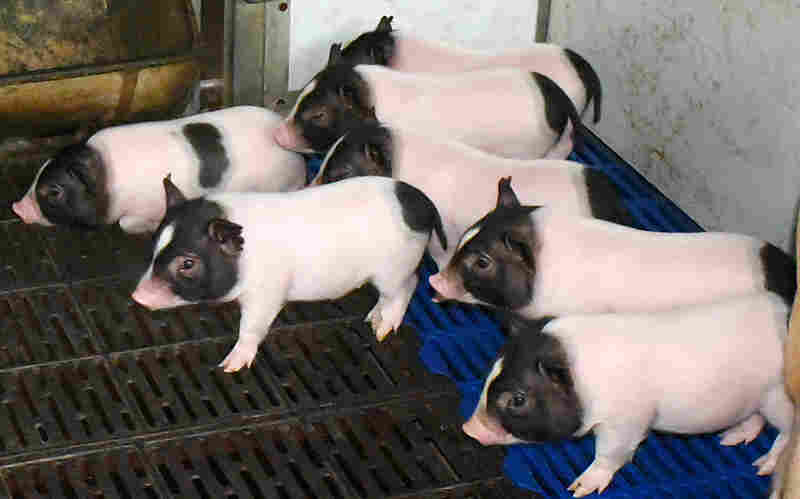 The animals have less body fat because they have a gene that allows them to regulate their body temperatures better by burning fat. That could save farmers millions of dollars in heating and feeding costs, as well as prevent millions of piglets from suffering and dying in cold weather.

"They could maintain their body temperature much better, which means that they could survive better in the cold weather," Zhao said in an interview.

Other researchers call the advance significant.

"This is a paper that is technologically quite important," says R. Michael Roberts, a professor in the department of animal sciences at the University of Missouri, who edited the paper for the scientific journal. "It demonstrates a way that you can improve the welfare of animals at the same as also improving the product from those animals — the meat."

But Roberts doubts the Food and Drug Administration would approve a genetically modified pig for sale in the United States. He's also skeptical that Americans would eat GMO pig meat.

"I very much doubt that this particular pig will ever be imported into the USA — one thing — and secondly, whether it would ever be allowed to enter the food chain," he says.

The FDA has approved a genetically modified salmon, but the approval took decades and has been met with intense opposition from environmental and food-safety groups.

Others say they hope genetically modified livestock will eventually become more acceptable to regulators and the public.

"The population of our planet is predicted to reach about 10 billion by 2050, and we need to use modern genetic approaches to help us increase the food supply to feed that growing population," says Chris Davies, an associate professor in the school of veterinary medicine at Utah State University in Logan, Utah.

Zhao says he doubts the genetic modification would affect the taste of meat from the pigs.

"Since the pig breed we used in this study is famous for the meat quality, we assumed that the genetic modifications will not affect the taste of the meat," he wrote in an email.

The Chinese scientists created the animals using a new gene-editing technique known as CRISPR-Cas9. It enables scientists to make changes in DNA much more easily and precisely than ever before.

Pigs lack a gene, called UCP1, which most other mammals have. The gene helps animals regulate their body temperatures in cold temperatures. The scientists edited a mouse version of the gene into pig cells. They then used those cells to create more than 2,553 cloned pig embryos.

Tests on the piglets showed they were much better at regulating their body temperatures than normal pigs. They also had about 24 percent less fat on their bodies, the researchers report.

"People like to eat the pork with less fat but higher lean meat," Zhao says.

The animals were slaughtered when they were six months old so scientists could analyze their bodies. They seemed perfectly healthy and normal, Zhao says. At least one male even mated, producing healthy offspring, he says.