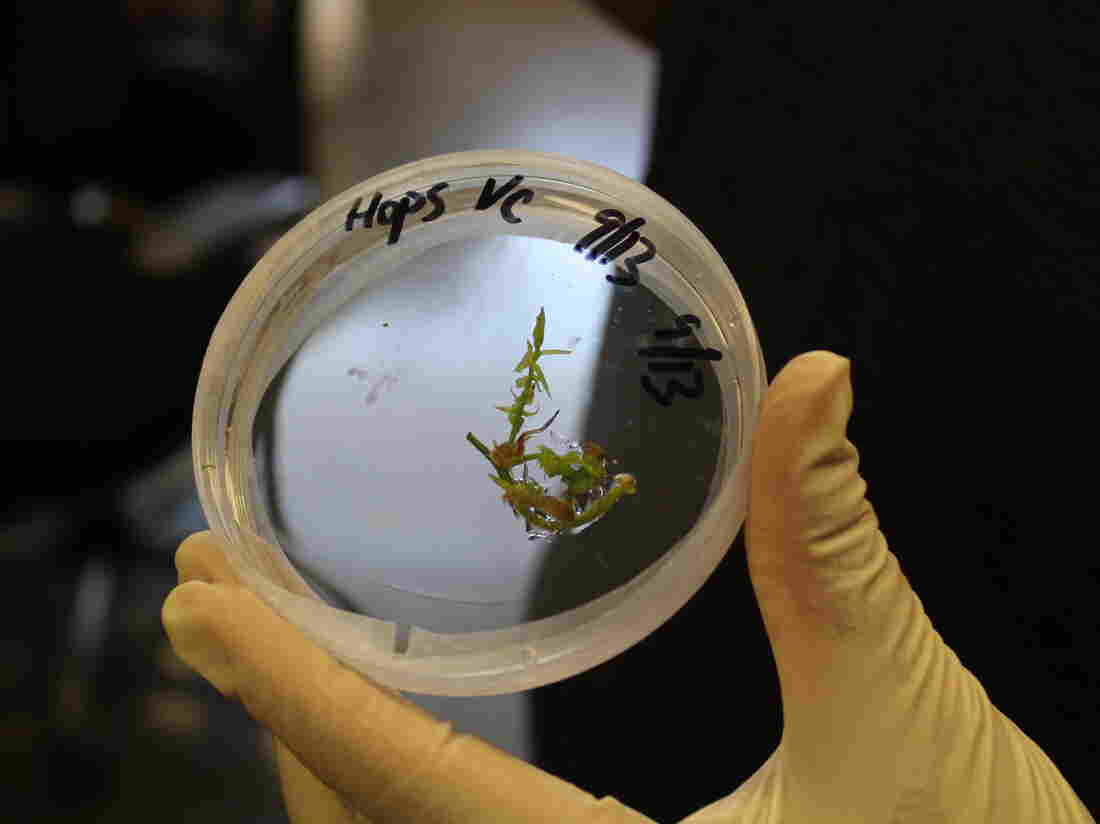 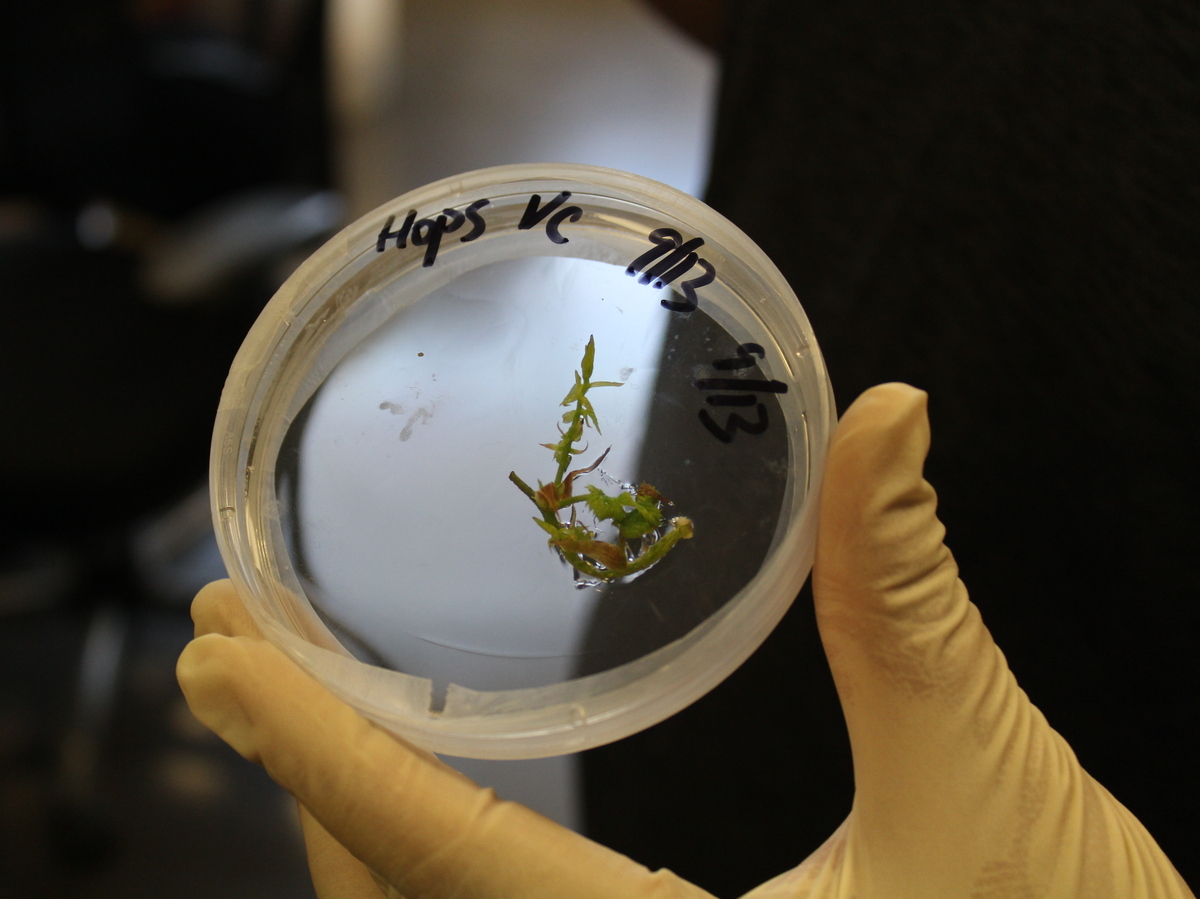 Hops internodes growing in a Petri dish in the SUNY Cobleskill biotech lab.

Some might consider the scraggly vines often spotted snaking up porch trellises in New York's Schoharie County a nuisance.

But there are some vine-like plants in this region that have a deep importance to the area — and signify promise for the future of local agriculture.

Hops helped make vast fortunes for farmers and brewers in New York state in the 19th century. Then, around 1910, a mildew blight ushered in their swift demise. There have been unsuccessful attempts to revive them ever since Prohibition ended in 1933.

Now, 14 biotech students at the State University of New York (SUNY) in Cobleskill are working to engineer fungus-resistant hop varietals native to New York, itching for a role in the revival of the state's historic craft beer industry. The hope is to stave off another disease-borne calamity — or at least, make the local growing of heritage hops less of a hardship.

"The way we're working with hops — it's very new," says chemistry professor Lynda McMaster-Schuyler, who helps oversee the initiative. Labs elsewhere have been working to develop mildew-resistant strains native to other places. But, McMaster-Schuyler says, the effort to revive the traditional New York hops is "completely original to us. And the fact that these hops are right in our backyard — that's the beauty beyond the science."

Developing mildew-resistant hops would be a boon to the area's 120 hops farmers — and others deciding whether planting this lucrative but troublesome commodity is worth the risk.

In the Cobleskill lab, a stack of Petri dishes contain sections of hop shoots, called internodes, growing in clear gel. Some of the dishes show splotches of white or orange, telltale signs of mildew infestation. But a few are clean and have begun developing the calluses — basically, masses of new cells — needed to initiate the next, genetic-engineering portion of the research.

In 2016, McMaster-Schuyler launched the hops project at Cobleskill, an agricultural college, as a way to support efforts to boost the state's farming economy. She was inspired, she says, by Gov. Andrew Cuomo's 2012 Farm Brewery License, which gives small brewers who agree to use locally grown ingredients like hops and barley (20 percent to start, 60 percent by 2019, 90 percent by 2024) a tax benefit, among other financial incentives. 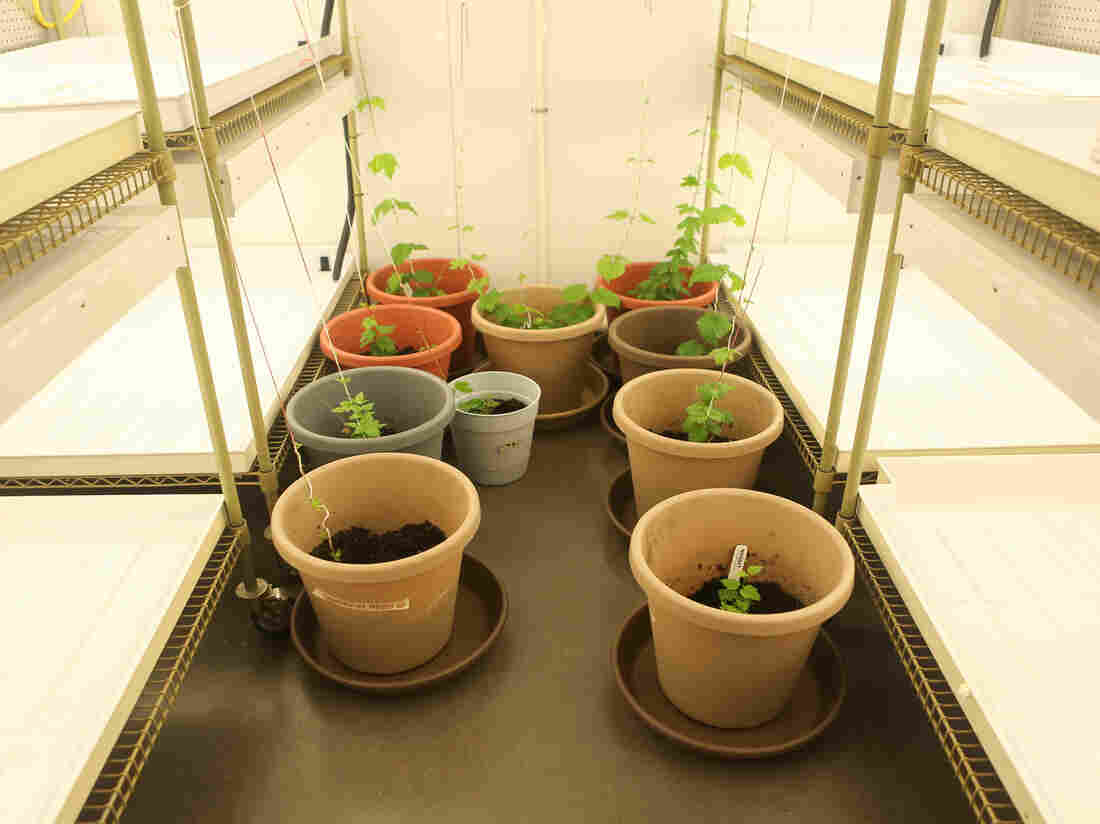 Buckets of hops plants, some of which were provided by Brewery Ommegang, in the Cobleskill lab's walk-in fridge. Courtesy of SUNY Cobleskill hide caption 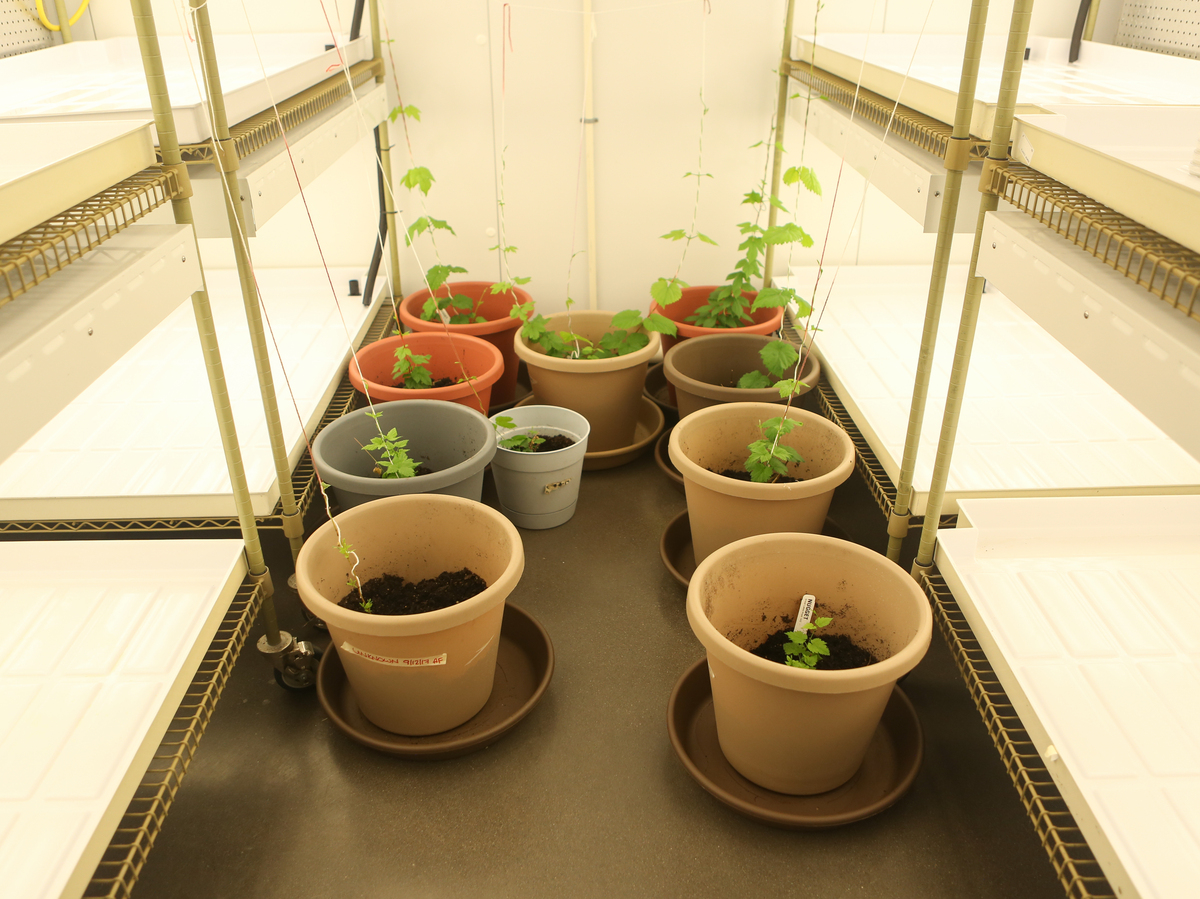 Buckets of hops plants, some of which were provided by Brewery Ommegang, in the Cobleskill lab's walk-in fridge.

Plant biotech research is the sort of work normally undertaken by a well-funded graduate lab at a large university. But there is no grad program at Cobleskill, a small college of 2,500 students within the SUNY network.

Farmers and brewers alike could benefit from research. In eight years, the number of acres in New York devoted to hops has grown from 15 to more than 400, according to Steve Miller of Cornell University's Cooperative Extension. He's the state's first "hop specialist"; he's been offering assistance to hops growers and also surveying them for the past several years.

Miller says that New York brewers with the Farm Brewery License produce about 50,000 barrels of beer a year. In order to make enough profit from their crops, area farmers sell hops in-state within the larger umbrella of craft brewers (producing over 1 million barrels a year), as well as to brewers in other states and Europe, in order to compete with large-scale growers in the Pacific Northwest. Control for disease, in particular downy mildew, is critical.

Jason Stone is the hops master at Brewery Ommegang in Cooperstown. Stone oversees the company's trial hopyard, determining which species grow well in the climate and soil, and develop unique flavors specific to the region — enough that brewers both in- and out-of-state will want to purchase them.

"It can take over," he says of downy mildew. "That gives you either a low yield, or a lower quality hop. It wouldn't be worth a brewer's time to buy that crop."

To help them along, Stone supplied some of the plants the students are using in the lab.

Once the hop calluses are ready, likely during the Winter semester, students will infect them with agrobacteria that will transfer DNA that contains a fungus-resistant gene. If all goes well, the students will analyze the modified plants this Spring to make sure the right genetic traits have been transferred, sow them in Cobleskill's on-site hopyard, and grow them out.

McMaster-Schuyler is optimistic about their prospects for success, although uncertain how long the process will ultimately take.

Cobleskill's biotech students "have already done this [in an earlier project] with drought- and disease-resistant switchgrass, and perfected certain techniques," she says.

After the growing-out phase, the current researchers will all have graduated. On their heels, a new batch of undergrads will test the engineered plants for disease resistance, presenting their findings as they go at biotech conferences. If the project is successful, eventually they, or their successors, will publish research in a scientific journal.

This is hardly a quick road to mildew obstruction. But Ommegang's Stone points out that building the state's hop industry back up is a project for the long haul.

"It's similar to when vineyards were getting started in New York," he says, referencing another agricultural success story for the state. "That took about 30 years in all."