Accessibility links
Amid GMO Strife, Food Industry Vies For Public Trust In CRISPR Technology : The Salt Mushrooms that don't brown? Pigs resistant to diseases? Though the process does not introduce foreign genetic material into food or livestock, getting consumers to buy in will be an uphill battle. 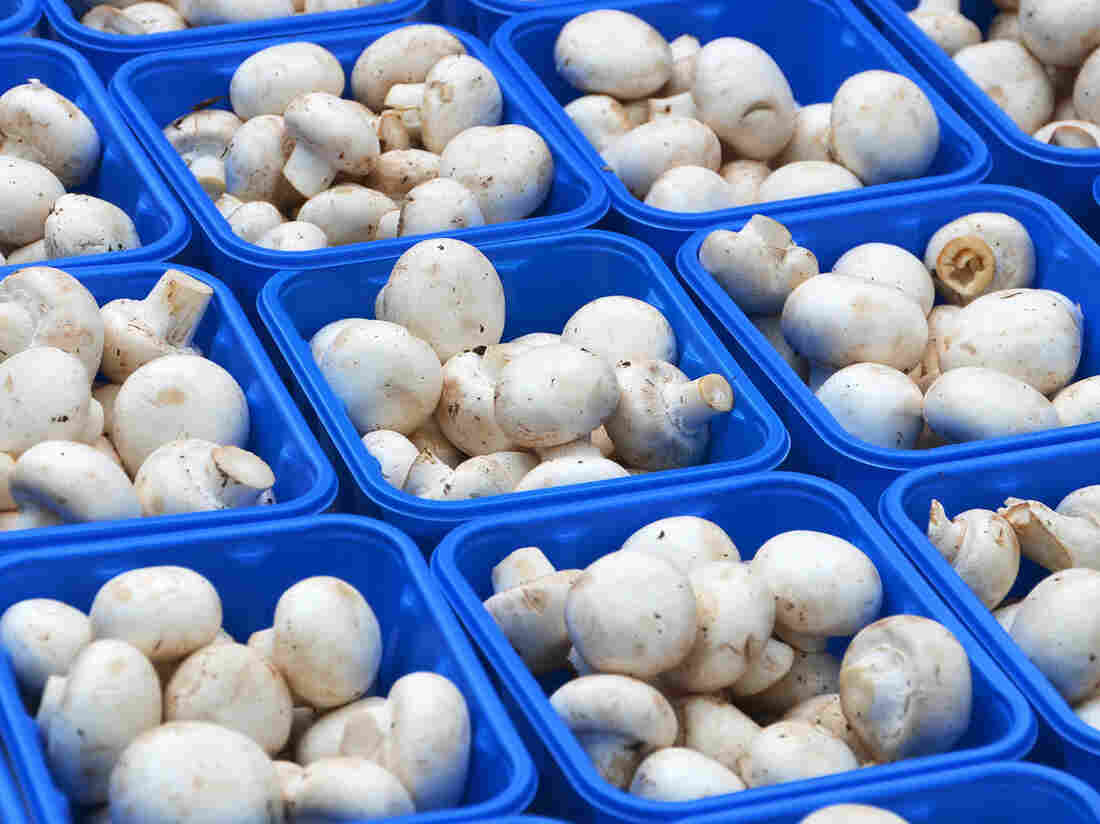 Scientists have used a popular gene editing tool called CRISPR to snip out a tiny piece of DNA from one particular gene in a white button mushroom. The resulting mushroom doesn't brown when cut. Adam Fagen/Flickr hide caption 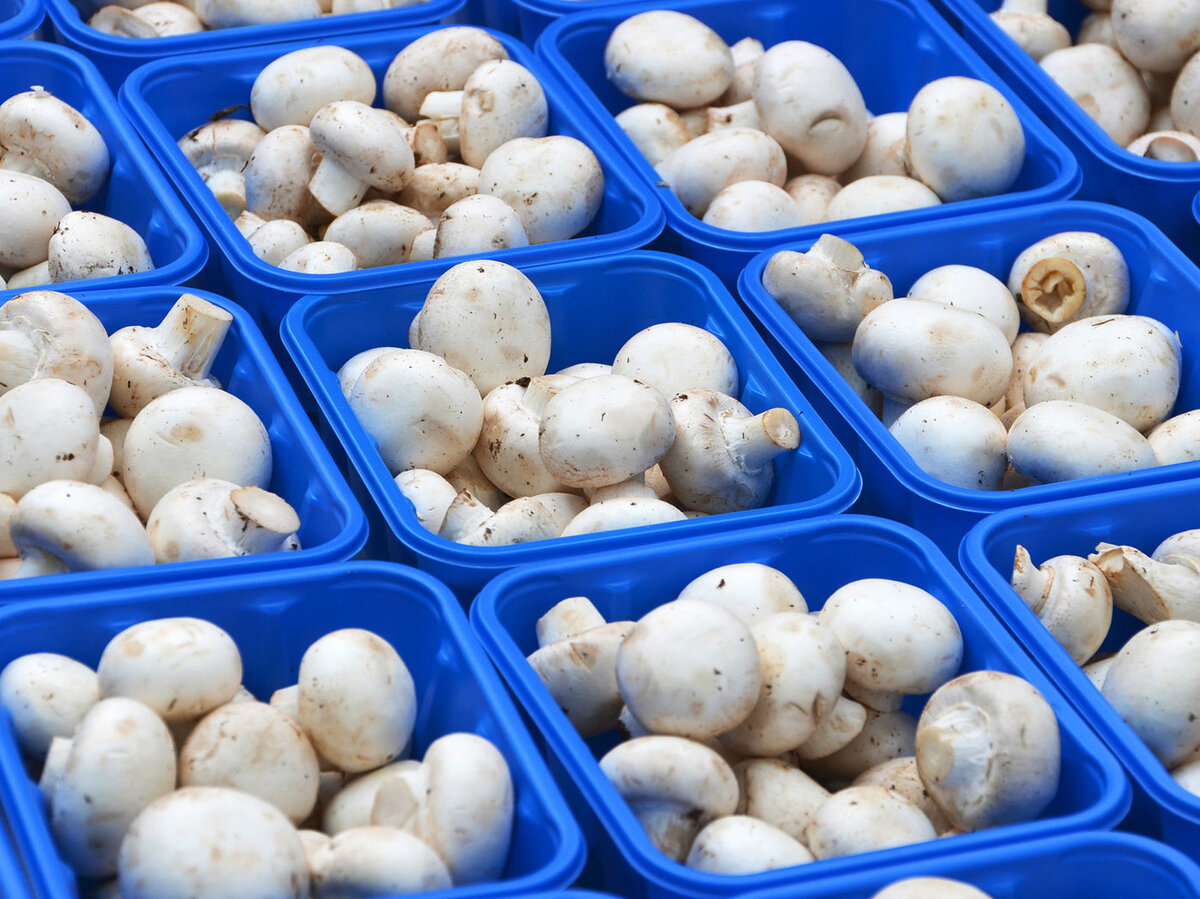 Scientists have used a popular gene editing tool called CRISPR to snip out a tiny piece of DNA from one particular gene in a white button mushroom. The resulting mushroom doesn't brown when cut.

There's a genetic technology that scientists are eager to apply to food, touting its possibilities for things like mushrooms that don't brown and pigs that are resistant to deadly diseases.

The technology is called Clustered Regularly Interspaced Short Palindromic Repeats, or CRISPR. It's a technique that Alison Van Eenennaam, an animal genetics professor at University of California, Davis, says can de-activate a gene. Or, as she puts it: "It's editing. It's like going into a Word document and basically replacing one letter, maybe that instead of 'wind,' you want it to say 'wine,' " she says.

Skeptics, like Dana Perls with the environmental group Friends of the Earth, say food companies are trying to distance themselves from terms like GMO and genetic engineering that have caused them trouble with consumers.

"These new gene editing technologies like CRISPR are genetic engineering. And if this is genetic engineering, then call it that," says Perls. She says these producers are just trying to pull the wool over consumers' eyes with a strong public relations push.

Dozens of crops and livestock developed with CRISPR technology are years from the market, though the U.S. Department of Agriculture already said it won't regulate CRISPR-developed products like other genetically engineered food, since no foreign genetic material is introduced in the process. The Food and Drug Administration will decide which new products are safe.

To get ahead of any criticism, a group of heavyweights in the food industry have joined forces to form the Coalition for Responsible Gene Editing in Agriculture, which is funded by members like the U.S. Pork Board, Monsanto, Syngenta and Bayer.

The board's CEO, Bill Even, says the food industry missed a chance to do this when the earlier wave of genetically engineered food made it to the market.

"There was never any conversation with consumers around what is this and what did it mean," he says. "Fast forward now today, there's a lot of debate around GMOs and food. The public rightly [is] ... interested in knowing what's in their food."

People don't often trust big companies, says Charlie Arnot, who leads the coalition and is the CEO of the Center for Food Integrity. But when it comes to CRISPR, there are three key strategies Arnot says will help get consumers on board.

First: CRISPR is not a secret.

"Those in technology have to be more transparent and be much more engaged in a public conversation and dialogue, in order to answer those questions, address the skepticism and ultimately result in earning consumer trust in what they're doing in gene editing," he says.

Second, the coalition wants to show that it shares the same values that shoppers do. So, its members are sponsoring and attending events like CRISPRcon to engage in public discussions about the technology and its potential animal welfare, societal and environmental benefits.

Will Genetically 'Edited' Food Be Regulated? The Case Of The Mushroom

And that's the third strategy: These companies want consumers to know that CRISPR isn't like other forms of genetic engineering. CRISPR changes the way genes are expressed; it doesn't necessarily add genetic material from another species, although it can be used that way.

"That's going to be the path that will ultimately lead to greater trust," Arnot says. "If we shortcut that path, we run the risk of potentially having this significantly beneficial technology not be accepted."

But persuading consumers to buy into CRISPR will be an uphill battle for Arnot and other industry groups. Food and environmental advocacy groups already are asking questions about CRISPR, as well as raising concerns over tracing genetically edited food in the system and the potential lack of regulatory oversight.

This story comes to us from Harvest Public Media, a reporting collaboration that focuses on agriculture and food production. Kristofor Husted is based at member station KBIA in Columbia, Mo.

The audio of this story, as did a previous Web version, states that CRISPR doesn't add genetic material from another species. However, it can be used that way.