Accessibility links
Toxic. Sour. Atomic. Why We Love To Hate Gross Candy : The Salt Candy is supposed to be sweet and delicious. So why are we tempted by candy that pretends to be made of hazardous chemicals, that threatens to nuke our tastebuds, or that dares us to be disgusted? 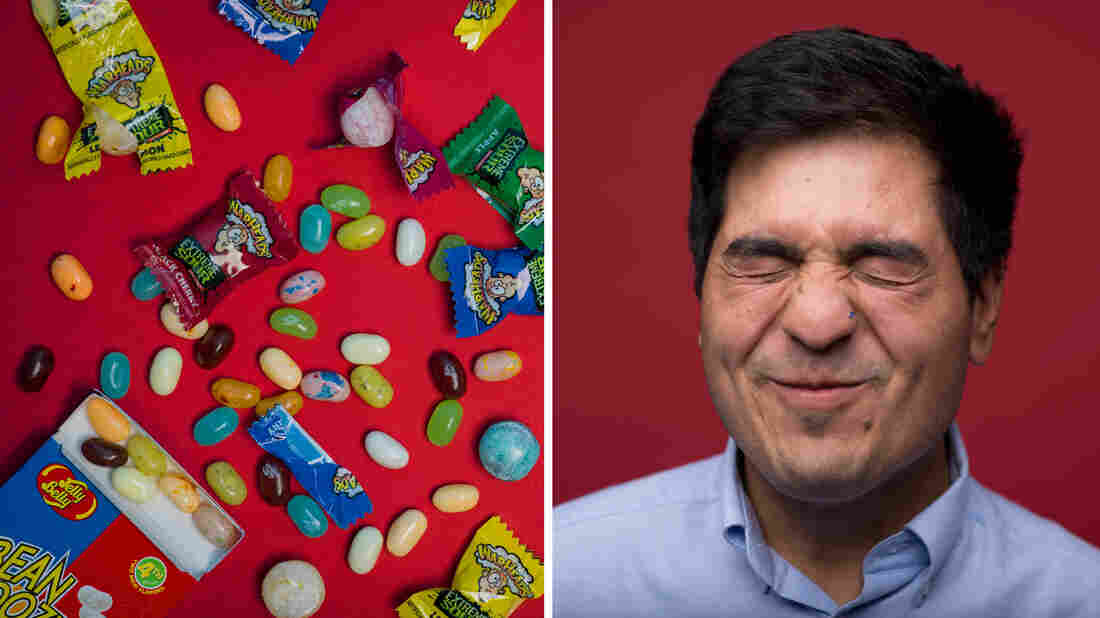 NPR intern Kevin Garcia endures the sour taste of Warheads hard candy. Why are we tempted by candy that pretends to be made of hazardous chemicals, that threatens to nuke our taste buds, or that dares us to be disgusted? Photo illustration by Josh Loock/NPR hide caption 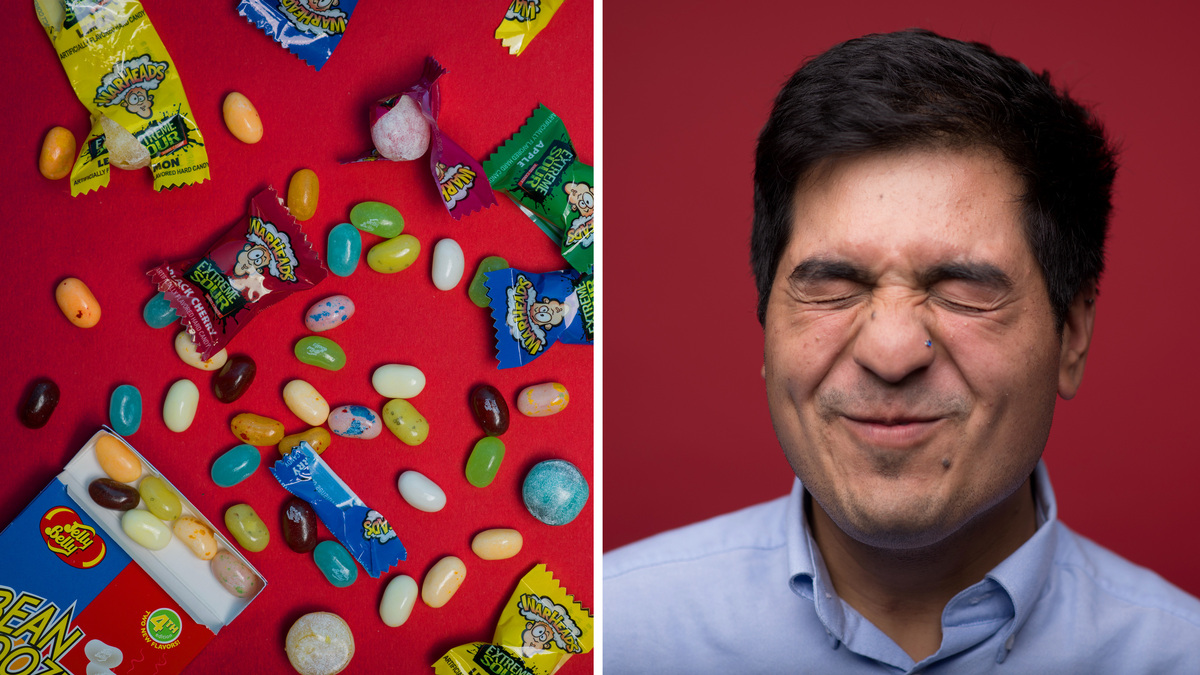 NPR intern Kevin Garcia endures the sour taste of Warheads hard candy. Why are we tempted by candy that pretends to be made of hazardous chemicals, that threatens to nuke our taste buds, or that dares us to be disgusted?

In the vast anthropological catalog of contemporary humanity that is YouTube, there's an entire universe of videos where cute little kids bug out their eyes, gag and make hideous faces while trying not to spit out distressingly sour or disgustingly flavored candy. Videos with titles like "Extreme Sour Candy Challenge" and "Extreme SOUR SMOOTHIE Challenge!!!! Warheads, Toxic Waste (DANGEROUS!!!)" have millions or even tens of millions of views.

Candy agony videos are not just for kids, but for (alleged) grown-ups too. When YouTuber "Furious Pete" took the "150 Warheads Challenge," he made sure to lean into the camera for close-ups of his livid, candy-discolored tongue and gums. "This is easily the most painful challenge ever," he belches, and you almost believe him.

Candy is supposed to be sweet and delicious, right? So why does it seem like so many candies are trending toward the mouth-manglingly sour and the exuberantly repulsive, with names like Sour Smog Balls, gummy brains and oozing eyeballs, rotten egg or barf-flavored Jelly Belly jelly beans? In fact, extreme and novelty candy is one of the fastest-growing categories in the confectionery business, according to the National Confectionery Association.

Where did these candies come from? And why are we tempted by candy that pretends to be made of hazardous chemicals, that threatens to nuke our tastebuds, or that dares us to be disgusted? What's the deal with gross candy?

A short history of gross and extreme candy

In the early days of mass-manufactured candy, in the 19th century, confectioners had to contend with worries that cheap sweets contained harmful chemicals or were made under filthy conditions. For an industry that struggled to establish its reputation and the safety and quality of its products, it probably seemed prudent not to stoke fears of contamination by producing candy that was weird or disturbing.

It's almost hard to believe now, but until the 1950s, there was no special connection between Halloween and candy. When kids began putting on costumes and going trick-or-treating in the 1930s, "treats" were likely to be homemade baked goods or pieces of fruit.

"By the 1950s," writes historian Samira Kawash in her book, Candy: A Century of Panic and Pleasure, "food manufacturers and retailers were figuring out ways to cash in with commercial foods," and they began to run special Halloween-themed advertising and promotions, sharpening associations between candy and the ghoulish traditions of the holiday. 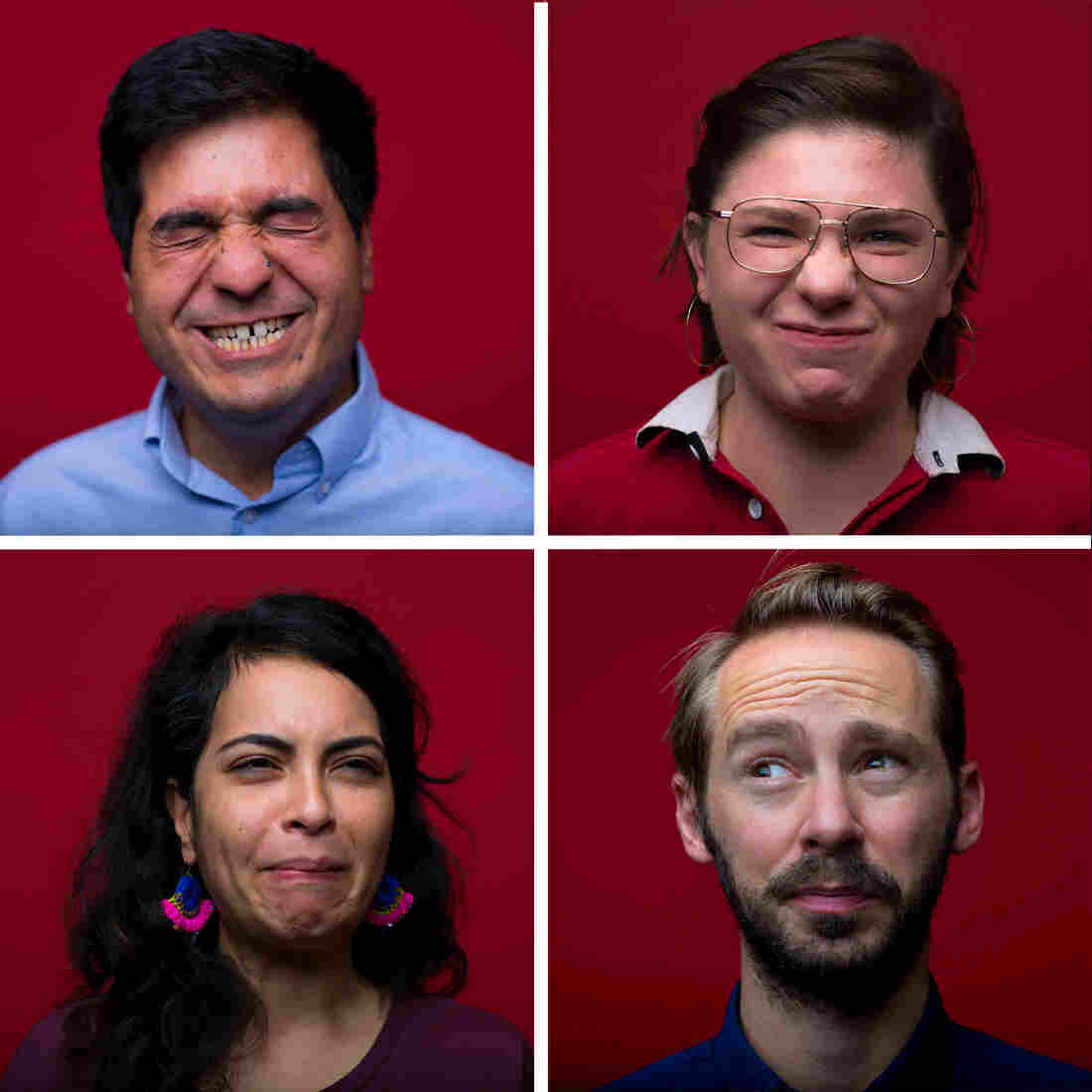 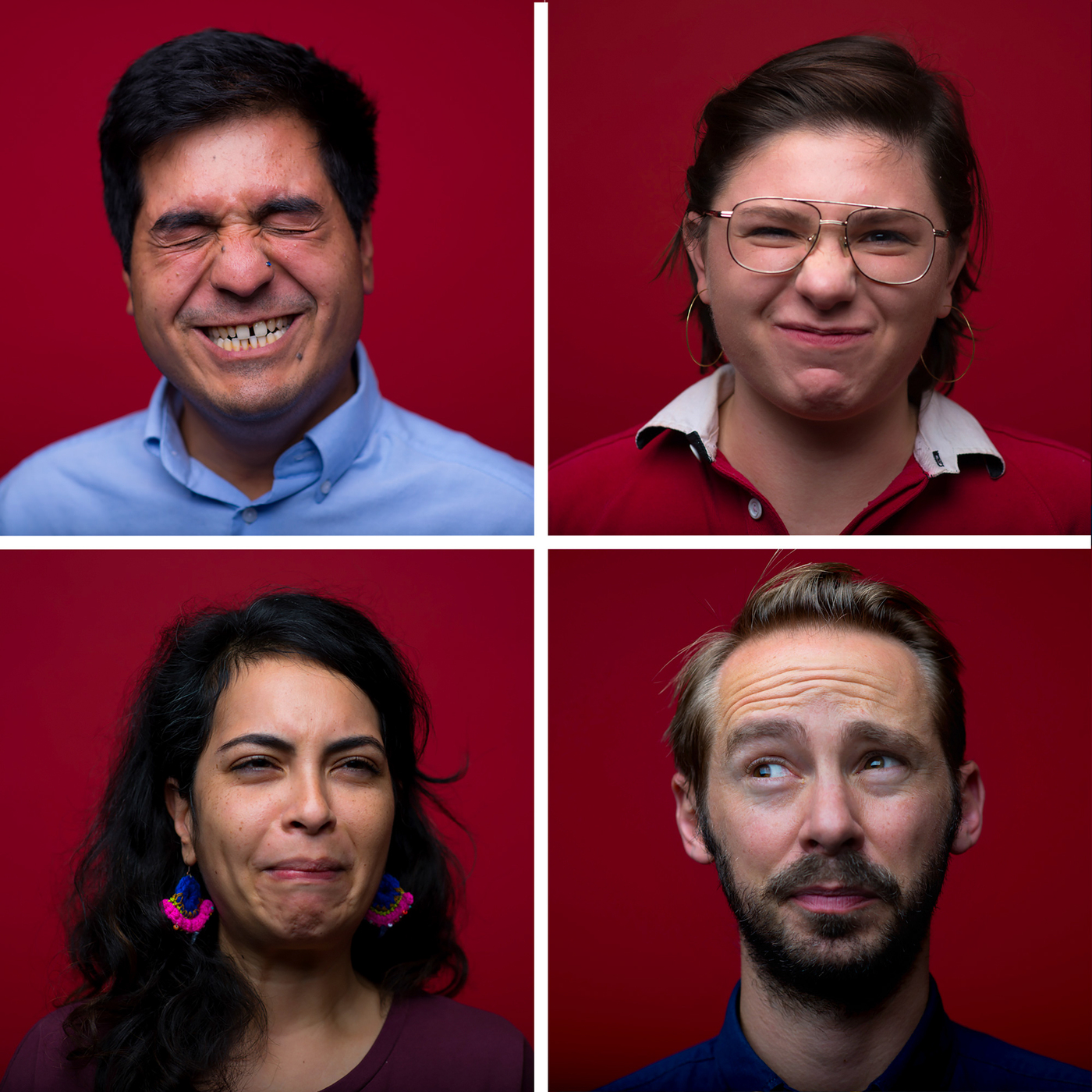 The first "extreme" candy — which promoted pain as a selling point — may be the "Atomic Fire Ball," introduced by Chicago's Ferrara Pan Candy Co. in 1954, the same year the U.S. military detonated the first hydrogen bomb and images of mushroom clouds filled the evening news. A flame-colored, mouth-filling jawbreaker, the Fire Ball is initially sweet, but inner layers contain cinnemaldehyde and capsaicin, the chemicals that give cinnamon and hot peppers their bite. It leaves your mouth tingling, numb and stained a lurid red.

Sour candy has a longer history. Tallahassee candymaker and historian Greg Cohen, who makes Victorian-style candy on antique machinery at his store Lofty Pursuits, explains that most 19th century candies probably tasted a bit sour. Acid can be used to convert sucrose — cane sugar — into fructose and glucose, sweeter-tasting sugars that resist crystallization.

"They did this with vinegar back in the day," he says; traces of the tartness would linger in the candy.

"Acid drops," sweet-tart candies flavored with acid, are also traditional. The bright-yellow "Lemonhead," introduced by Ferrara Pan in 1962, is a variant on the acid drop and is flavored with same chemical compound that gives lemons their sourness: citric acid.

But the current vogue for supersour, brain-puckeringly intense candy is usually traced to 1993, the year the Mega Warhead first detonated in America. It was brought to these shores by Peter De Yager, founder of the Foreign Candy Co. of Hull, Iowa, who had made his mark by first importing Gummy Bears to the U.S. in the late 1970s. In the early 1990s, looking for the next candy sensation, he tried a sour lemon candy imported from Japan.

"It was so sour that most people would take it out of their mouth immediately, throw it in the wastebasket, and almost be angry at you," he told Wired magazine in 1999. "You thought you'd have an enemy for life."

Instead, he realized he had a potential hit on his hands. De Yager traveled through East Asia, ground zero for extra-sour candy, sampling local varieties of sourness, before finding the sourest one of all in Taiwan. He called it the Warhead, and the rest is history.

The secret to the Warhead's sourness lies in its combination of organic acids. The outer layer contains malic acid, an excruciatingly tart compound that can be found in smaller doses in Granny Smith apples. Inner layers contain tamer citric acid and ascorbic acid (better known as vitamin C).

The Warhead's success opened the floodgates for new kinds of candy intensity, as more and more candymakers began using large quantities of malic acid to deliver extreme levels of sourness. Candymakers also began pursuing new frontiers of hotness. The cinnemaldehyde-capsaicin rush of the Atomic Fire Ball seems like a shot off a Nerf gun compared with the latest generation of thermonuclear sweets, which use ingredients like ghost peppers — among the world's hottest — to deliver searing blasts of heat.

Gross flavors have also reached the next level with Jelly Belly's popular BeanBoozled jelly beans, which turn disgust into a game. Every box includes 20 flavors — 10 standard, 10 "weird and wild" — but only 10 colors. A spinner included in the box points you to your next selection. Will an orange jelly bean flecked with red be peach, or barf? Will a confetti-colored bean be Tutti Fruitti, or Stinky Socks?

"It's sort of the Russian roulette of jelly beans," explains Rob Swaigen, Jelly Belly's vice president of marketing, who helped develop the product. "If we're at a tasting session and everyone chokes and throws their head back, then we know we've got a winner," he says. To make it to BeanBoozled, "It's got to be a really knock-you-back flavor."

So why do we like to eat these things?

Paul Rozin, a psychologist at the University of Pennsylvania who has spent decades studying disgust, told me that the appeal of challenging candy might be explained by a phenomenon he calls "benign masochism" — other seemingly unpleasant things we love to do, like watch horror movies or cry at sad songs.

"Just like when you go on a roller coaster, you feel fear, but you enjoy it — the negativity is part of the enjoyment." This reversal is only possible, Rozin says, because "there is no actual threat." In other words, we can enjoy "Toxic Waste" candy precisely because we are certain that it is not really filled with hazardous sludge.

Rachel Herz, a professor of psychology at Brown University and the author of That's Disgusting and the forthcoming Why You Eat What You Eat, explains that part of the pleasure of gross candy may be that it gives kids the opportunity to probe the boundaries of what adults find repulsive, while also (mildly) scandalizing parents. We are not born grossed out by vomit, poop, or dead things; disgust has to be learned.

Herz also speculates that the spiking intensity of extreme candies may be related to the general sensory saturation of our times. Young people are constantly bombarded with visual and auditory stimuli, and so "candy might have to go extreme simply to get our attention."

Rozin believes there might be something else going on as well: an attraction to the spectacle of disgust and repulsion as experienced by other people. "The great fun in Pop Rocks was not in eating them yourself, but in getting other people to try it and watching their reaction."

He's got a point. Remember all those YouTube candy challenge videos? The dare, the challenge, seems to be central to gross candy's appeal. Love it or hate it, the experience of gross candy is made to be shared.