Accessibility links
Orange Chicken, Panda Express' Gift To American Chinese Food, Turns 30 : The Salt The concoction, crispy fried chicken tossed with a sweet and sour sauce, is an Americanized version of dishes found in China. But this top seller has developed its own authenticity over the years. 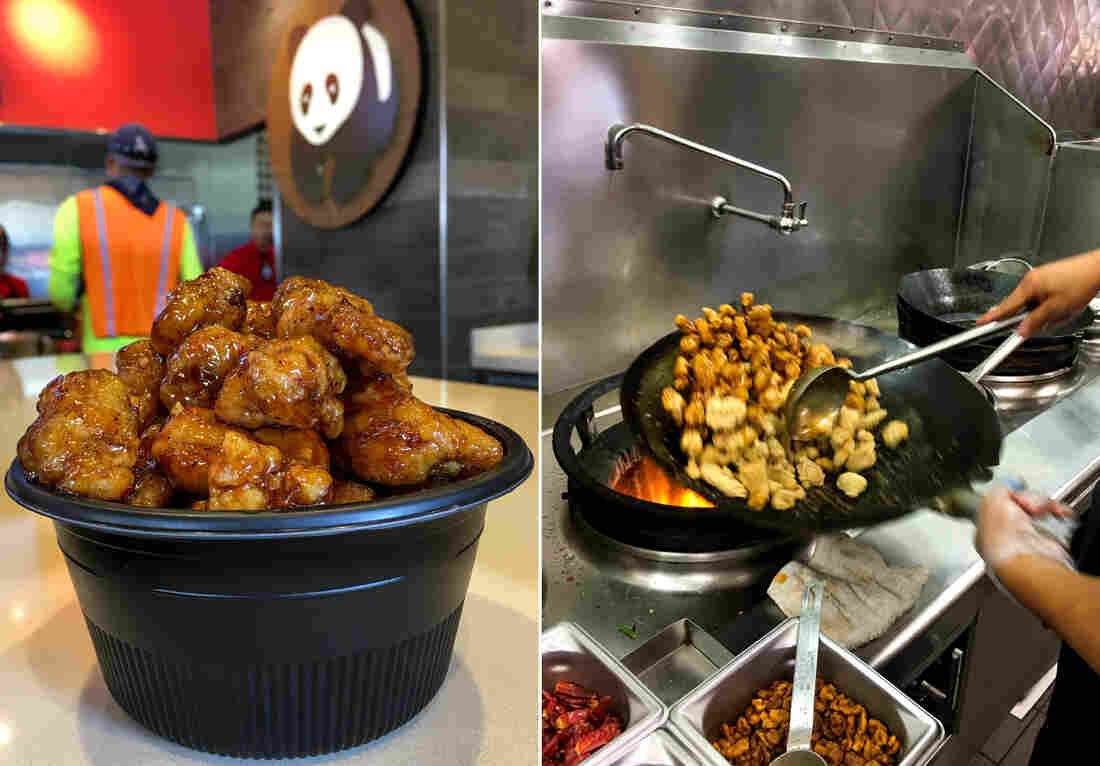 There are a lot of home recipes now for this dish. But Panda Express, the country's largest Chinese-American fast food chain, claims to have created this sweet and sour concoction, its signature dish, 30 years ago today.

"Orange chicken is probably one of the most genius creation in the past 30 years," gushes chef Jimmy Wang, who works out of Panda Express' "innovation kitchen" in Pasadena. "It's taking everything that we love — crispy fried chicken, tossed with savory sweet and sour sauce that really hits all the senses and taste buds in your mouth."

Wang says Panda Express uses dark chicken meat coated with a light batter. The sauce is a balancing act of sweet and sour: a little yin — with brown sugar and honey — and a little yang — Chinese black vinegar, soy sauce and more.

"You want to draw out tingling sensation with heat, with garlic, with ginger," says Wang. "We use a little bit of crushed chile to give it just a little kick, but not too much."

Wang says the key to the restaurant's sauce is using oil from orange peels. They deep fry what are essentially chicken nuggets and toss them in a wok with the orange-flavored sauce. There's no MSG.

Chef Andy Kao is credited with inventing orange chicken in 1987. He was classically trained in French cuisine and worked as Panda Express' executive chef. He's retired now, and travelling in Taiwan, where he was born.

Panda Express co-founder and CEO Andrew Cherng says Kao developed the dish at one of the company's locations in Hawaii, modifying a bone-in chicken dish that was popular. 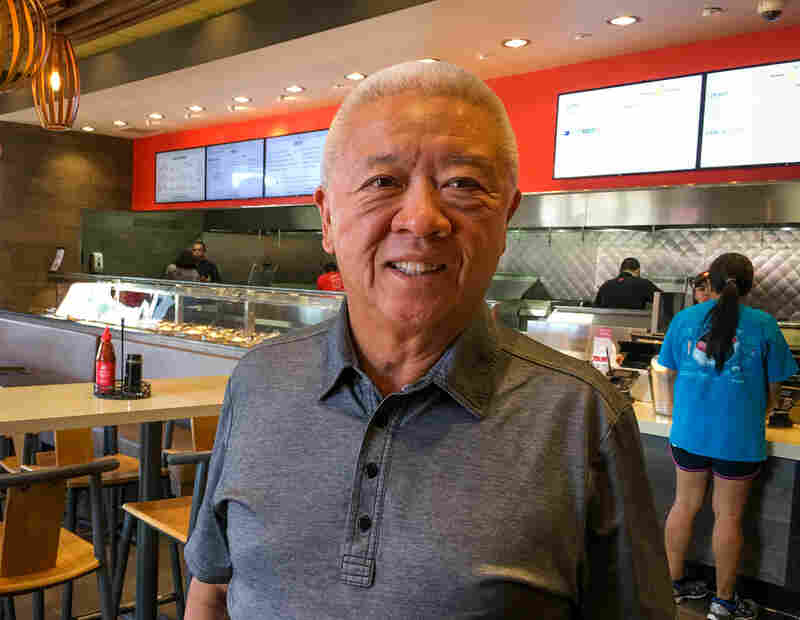 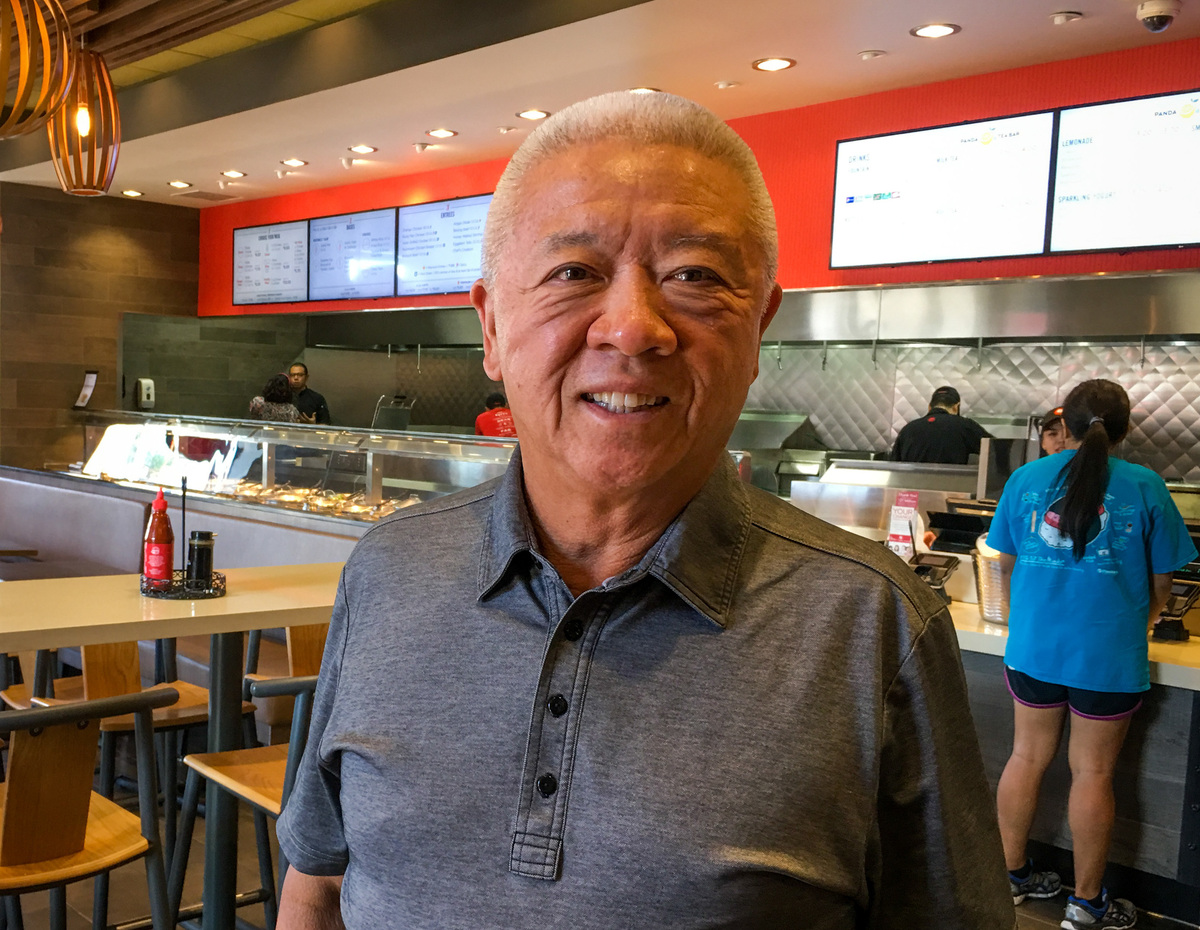 Panda Express co-founder Andrew Cherng says the chef who created Orange Chicken was inspired by flavors from the Hunan Province in China.

"It was selling so well, except people said, you know, 'Same flavor, do it without the bone.' OK, so there comes orange chicken," says Cherng, who says chef Kao was inspired by flavors from the Hunan Province in China.

Cherng says the dish is a variation of another fan favorite, General Tsao's chicken.

"This is not a Chinese dish. It's very much a cultural import," says journalist Jennifer 8. Lee, author of The Fortune Cookie Chronicles and producer of a documentary called The Search For General Tso.

Lee says Tso was a Qing dynasty statesman and military leader from the Hunan province who played an important role in the Taiping Rebellion of 1851, started by "a Chinese man who thought he was the son of god and therefore the baby brother of Jesus Christ." During that civil war, more than 20 million people died.

More than a century later, in the early 1970's, General Tso became the namesake of a dish created by another Taiwanese chef, Peng Chang-kuei.

Lee says both dishes — General Tso's chicken and Orange Chicken — are Americanized mutations of sweet and sour dishes found in China. In her documentary, she traveled to the country to ask people to react to these American Chinese innovations.

"They were baffled, very confused," she says. "It has a sort of goopy, fried heavy look. And they would be like, is this Chinese food? 'Cause it doesn't look like Chinese food to them."

Even so, Lee says American Chinese food has developed its own authenticity. Fans have even created skits and songs in its honor, which you can watch online.

"People love it," Andrew Cherng says of Panda Express' orange chicken — the company's top-seller. "They like the dessert before dinner or during dinner."