Accessibility links
Food Access Advocates Walk The Long Walk ... To The Nearest Grocery Store : The Salt Nearly 40 million Americans live miles away from fresh, healthy food, and participants in the "Grocery Walk" wanted to show how difficult it can be to get basic items in these often low-income areas. 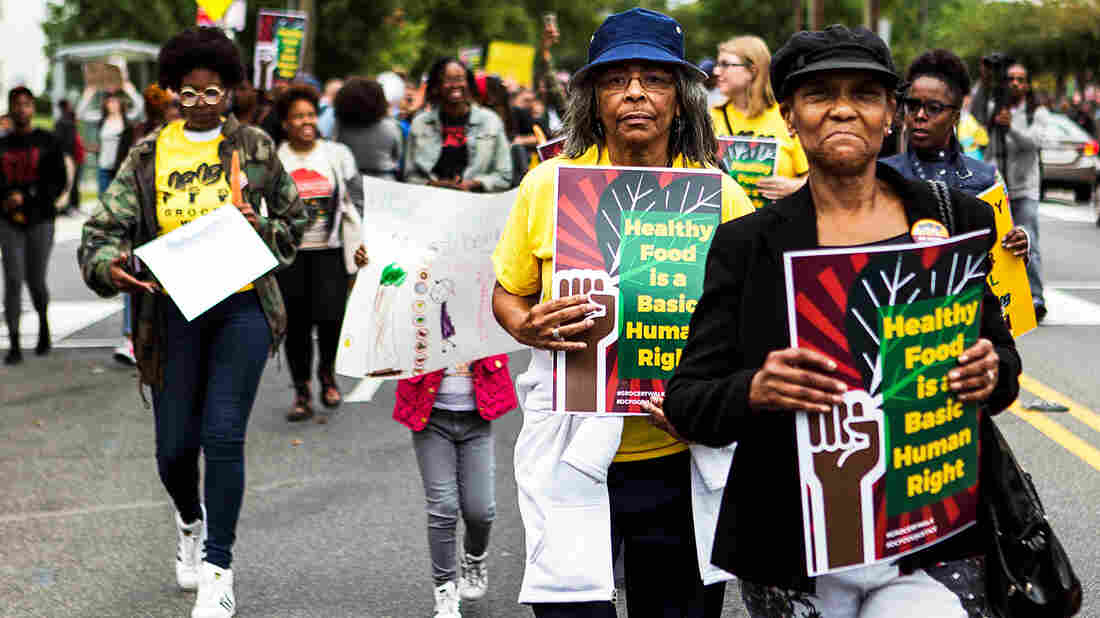 Hundreds of people took part in Washington, D.C.'s "Grocery Walk" to demonstrate the difficulty of getting fresh food in some areas. Brian Oh /Courtesy of DC Greens hide caption 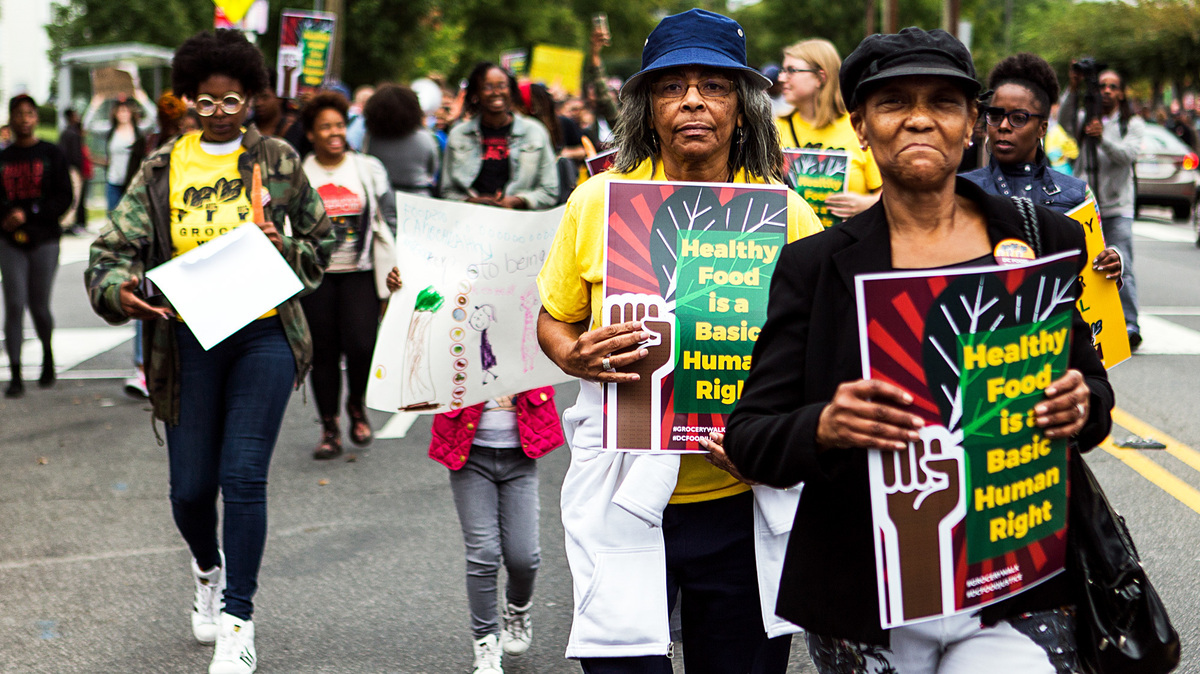 Hundreds of people took part in Washington, D.C.'s "Grocery Walk" to demonstrate the difficulty of getting fresh food in some areas.

Two miles isn't too far to march for a worthy cause, as people are prone to do in the nation's capital. But it is a long way to walk for groceries.

That's the impression organizers of a recent Grocery Walk in Washington, D.C.'s Anacostia neighborhood wanted to invoke when they gathered nearly 500 people to walk that far — wielding carrots and "food justice" signs — in the latest effort to address the intractable problem of food deserts. More than half of the participants were residents who live in or near the District's Ward 8, where a Giant Foods store is the only full-service grocer serving 70,000 residents, leaving fresh, affordable foods out of reach for many.

Nearly 40 million Americans live in communities with these so-called grocery gaps, where it is easier for people to buy grape soda than a handful of grapes, according to the U.S. Department of Agriculture.

Lauren Shweder Biel, executive director of the nonprofit DC Greens, which organized the event, says having so many residents involved demonstrates how strong the demand is for the healthful produce. She says she hopes that city officials — some of whom participated in the walk — retailers and the rest of the country would take notice.

"I think one of the most powerful impacts of an action like the Grocery Walk is that it silences the myth that poor people don't want healthy food," says Shweder Biel.

That perception keeps many food retailers from locating to low-income neighborhoods, says Christopher Walker, senior campaign director for the American Heart Association in Austin, Texas. There, food access advocates hosted a similar — but much smaller — stroll in 2015 through an underserved community near Austin's airport. They wanted to illustrate how difficult it can be to cross basic items off a shopping list — let alone make a nutritious meal — by trekking to the handful of corner stores that constitute the only retail options within walking distance.

"I don't think people realize how important it is to have a grocery store until they don't have one," says Walker. "We talk about grocery stores as if they're a luxury, but that's not the way we live our lives. Other than work, we go to the grocery store more than any other place — and we have entire neighborhoods and communities that don't have that."

The lack of grocery stores east of the Anacostia River in Washington, D.C., is particularly glaring because of an abundance of them in other parts of the city. A 2016 survey found nearly 70 percent of the District's supermarkets were concentrated in its wealthiest neighborhoods, with just three serving the 150,000 residents in poorer areas.

Still, the D.C. Council has a history of investing in innovative food-access policies, funding programs such as Produce Plus, which provides $10 vouchers for eligible residents to spend at farmers markets. And several nonprofits in the city focus on improving options in food deserts, whether by stocking corner stores with discounted produce or filling the gaps with produce-filled mobile markets. 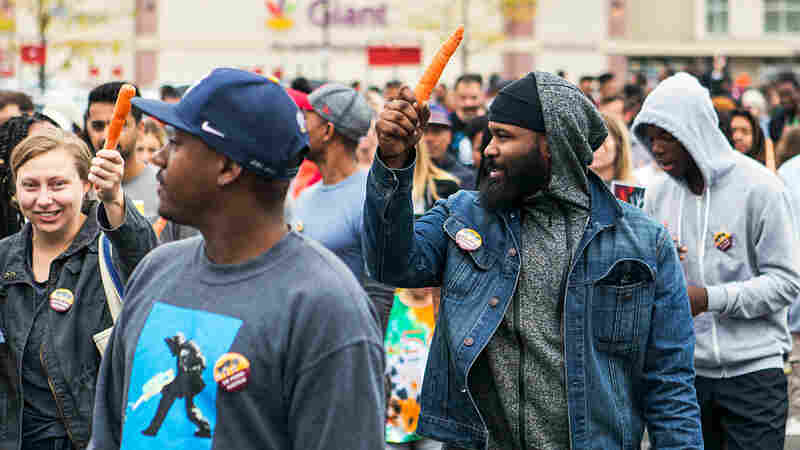 More than half of D.C.'s "Grocery Walk" participants were people who live in or near Ward 8, where there is just one full-service grocer serving 70,000 residents. Brian Oh/Courtesy of DC Greens hide caption 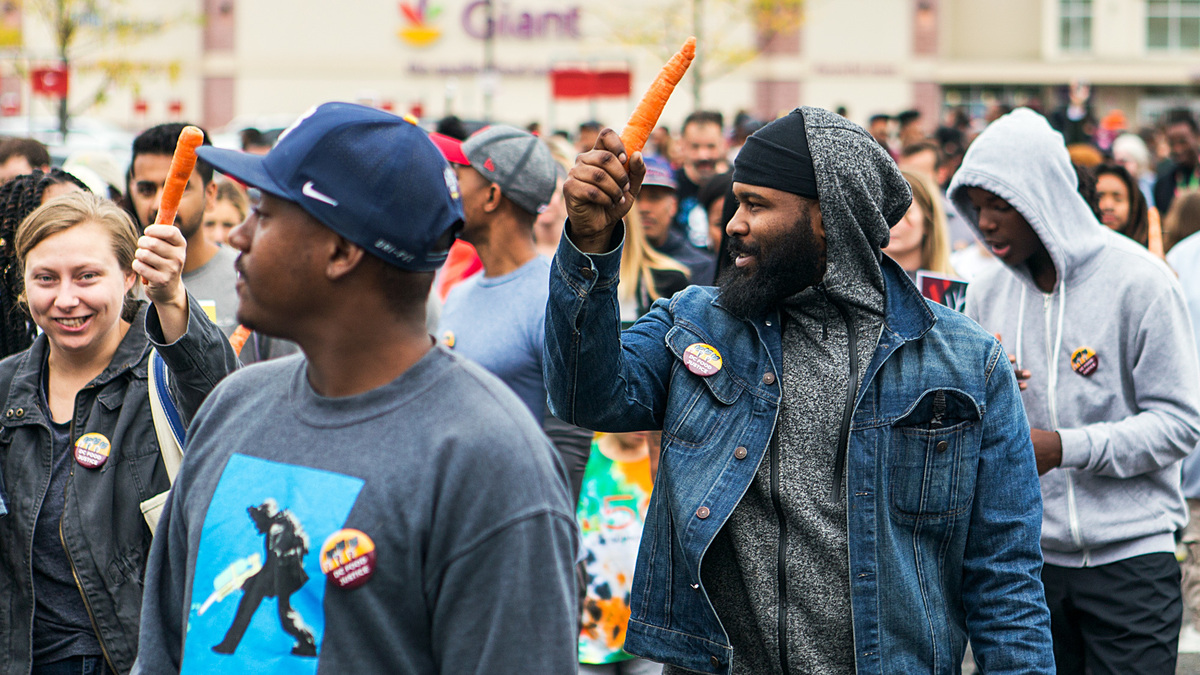 More than half of D.C.'s "Grocery Walk" participants were people who live in or near Ward 8, where there is just one full-service grocer serving 70,000 residents.

But efforts to address the longstanding grocery gap have continued to come up short. Early last year, Walmart broke its deal with city leaders to build two stores east of the Anacostia River in the city's poorest neighborhoods. And a greenhouse that was slated to bring jobs and produce to Ward 8 ended up moving to Northern Virginia.

"We really want to make sure our political leaders are treating this with the same kind of urgency that they give to affordable housing and education," says Shweder Biel.

She hoped that having six D.C. Council members and the city's deputy mayor participating in the recent Grocery Walk would parlay into action. Sure enough, a few days after the event, the city's mayor announced plans to funnel $3 million into projects that would provide new grocery and housing options for residents of the city's poorer areas.

Though the funding was in the works before the walk, Shweder Biel admits the timing was serendipitous. The walk, she says, was about more than getting a few more grocery stores into Ward 8, which, on their own, won't be enough to improve the health of residents who are five times more likely to die from diabetes than people who live in the city's wealthier neighborhoods.

But, Walker says, getting a few more grocery stores is a great place for cities to start — especially when residents can demonstrate pent-up demand for them with a walk like the one in Washington. Upfront investments can pave the way for retailers who might not otherwise locate in poorer enclaves but can be just as prosperous once they're there, he says. Walker has taken officials still on the fence about such spending to visit successful public-private projects, such as Pyburn's Farm Fresh Foods in Houston and a Circle Food Store in New Orleans.

"All you're doing is making it work for a business to operate in an area where, currently, the numbers don't add up," says Walker. "In some of these places, the most important thing was getting that store."

Whitney Pipkin is a freelance journalist living just outside Washington, D.C. You can find more of her work here. Follow her on Twitter at @WhitneyPipkin.