Accessibility links
Indonesian Food Blogger: The Unifying Power Of Cuisine And Social Media : The Salt The diverse Southeast Asian country has more than 17,000 islands, a median age of 29 and an expansive fare influenced by many cultures. And the tech-savvy population is reaching out to the world. 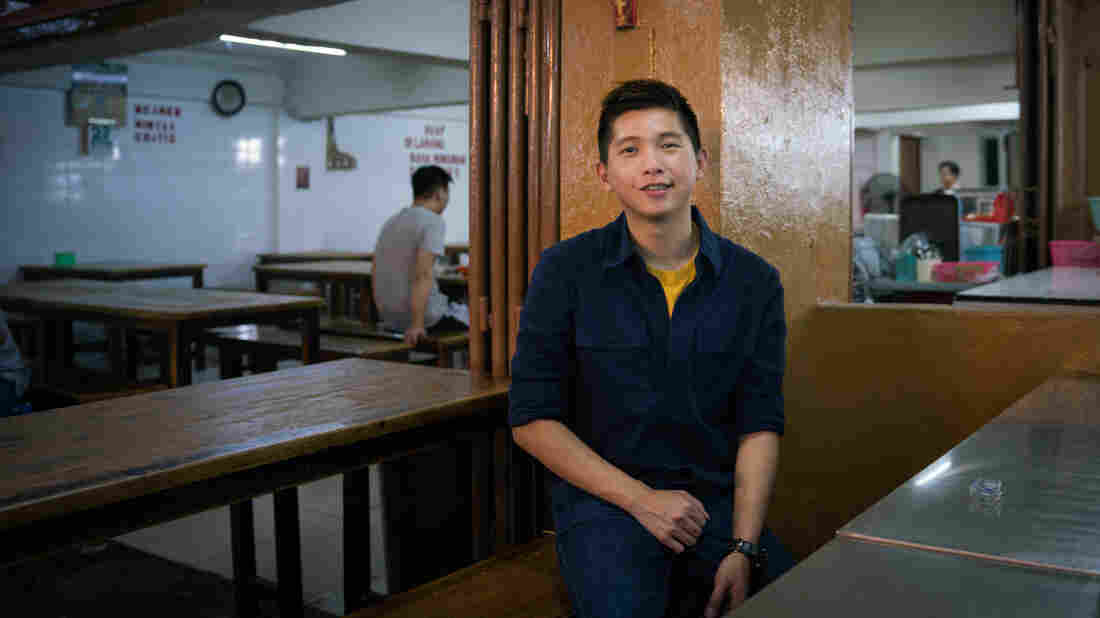 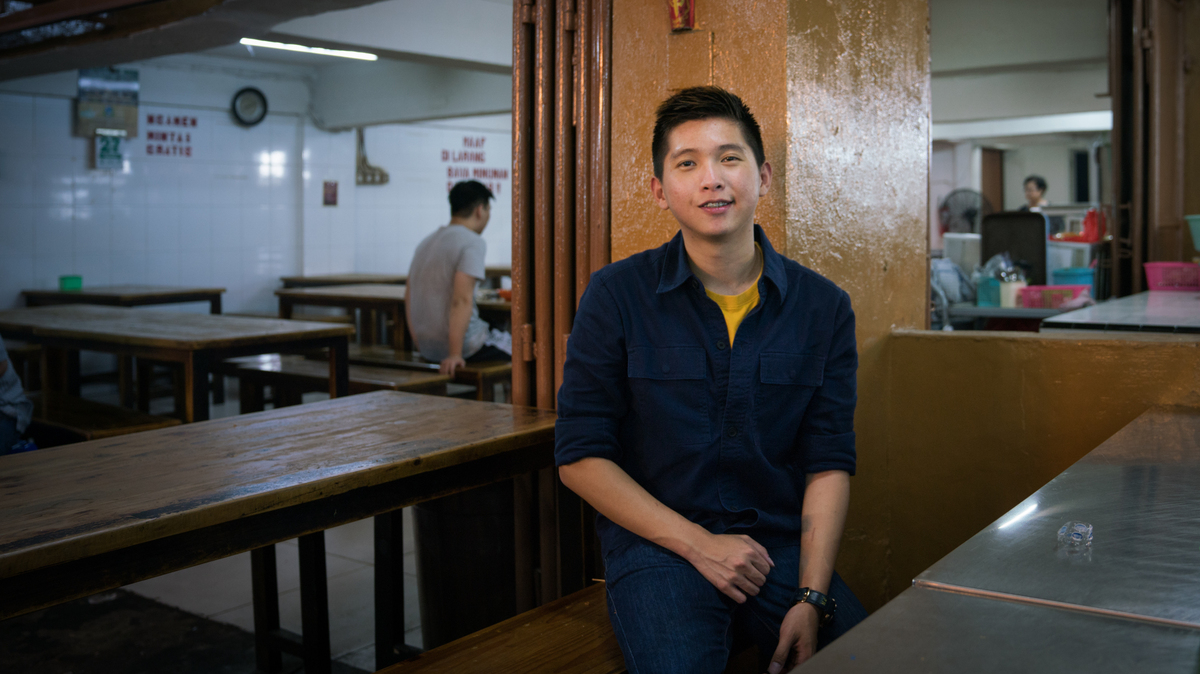 Indonesia is the fourth most populous country in the world, and its population is young — the median age there is 29, nearly a decade younger than the U.S. or China.

People in the capital city of Jakarta also tweet more than in almost any city in the world. Social media is, in fact, one of the threads that ties this country of more than 17,000 islands together.

One of those social media celebrities is 29-year-old food blogger and Instagram enthusiast Prawnche Ngaditowo, who is known online as "foodventurer."

Ngaditowo is of Chinese descent, but he grew up in the Indonesian city of Medan, where his father was a prawn farmer (hence his name). He moved to Jakarta after high school.

At an outdoor food court, with dozens of hawkers selling dishes from all over the country, Ngaditowo talks with All Things Considered host Ari Shapiro about the foods and social media outlets that help bind this sprawling country together.

Interview highlights contain some web-only extended answers. This interview has been edited for length and clarity.

On how he developed a passion for food blogging 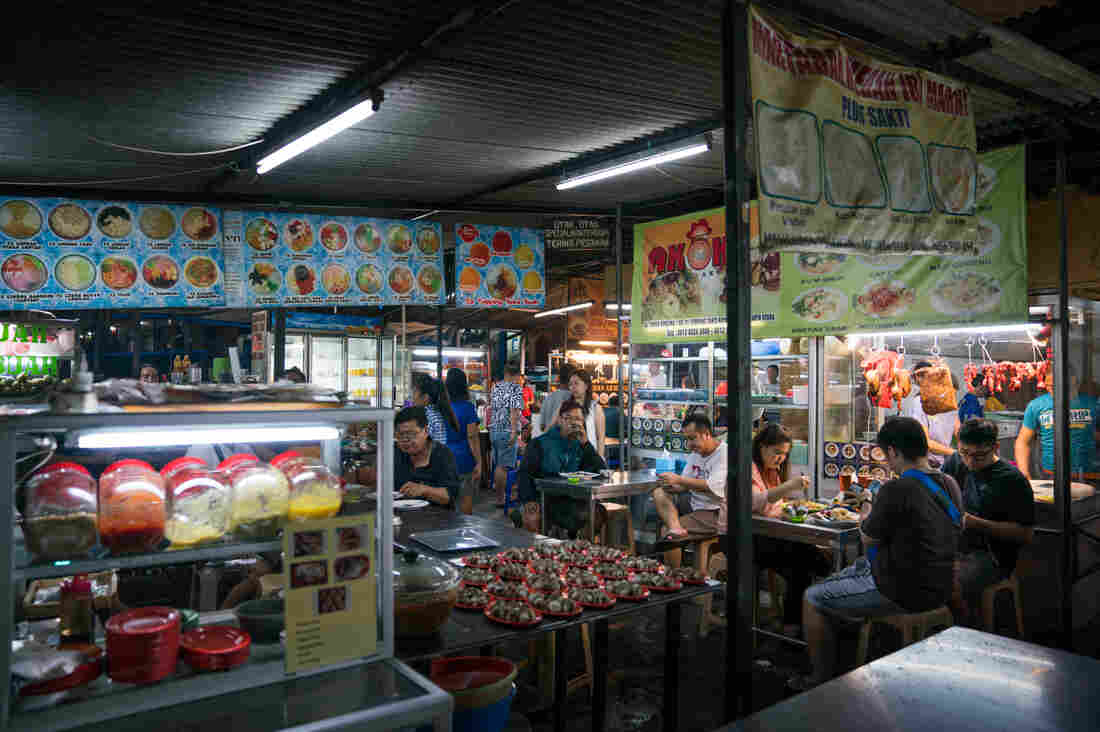 Dozens of hawkers sell dishes from all over the country at an outdoor food court in Jakarta, Indonesia. Claire Harbage/NPR hide caption 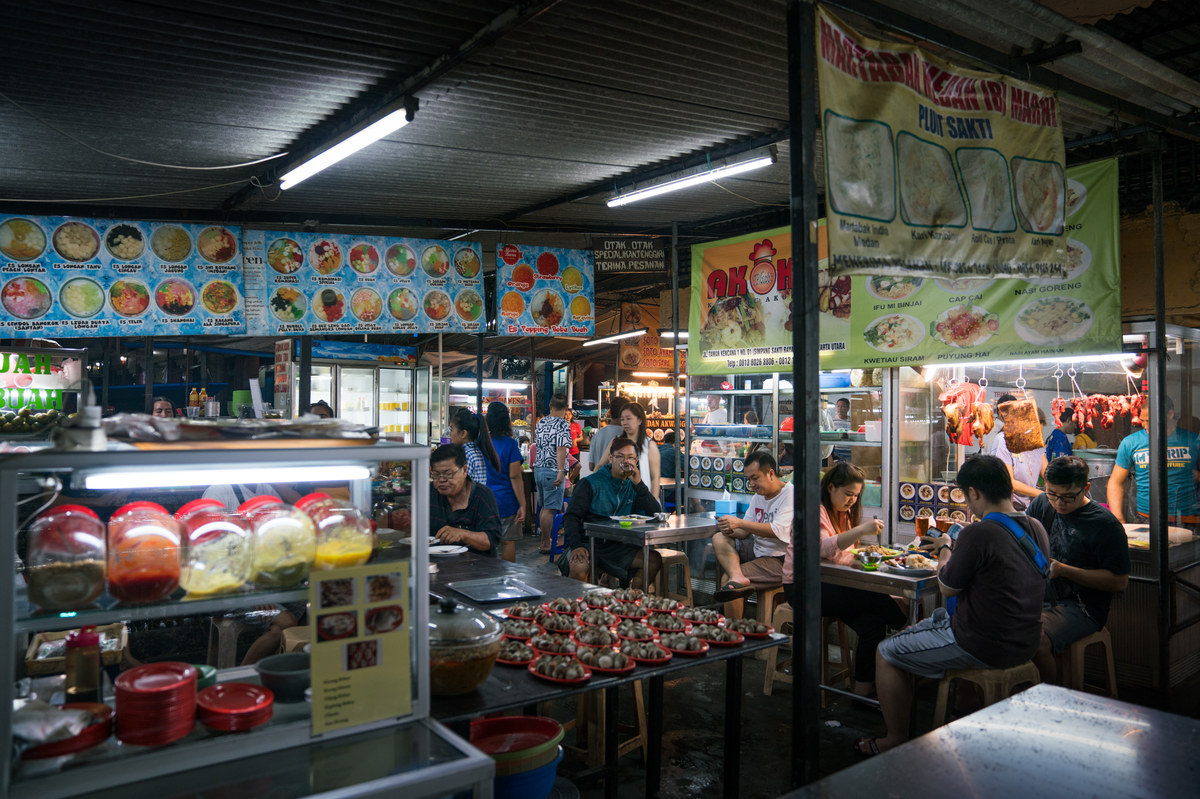 Dozens of hawkers sell dishes from all over the country at an outdoor food court in Jakarta, Indonesia.

When I moved to Jakarta to get my bachelor's degree, I was introduced to a lot more than what I usually encountered in Medan. We have a lot of towns and cities in Indonesia, so we have a lot of cultural diversity. I have not tried a lot of the food, so why not try it and also share it with the world?

On coming to the food court

The first time I came to this food court was almost 10 years ago. I was happy, because I found this place that's a lot like Medan, where I grew up, so it was kind of nostalgic and fun. There's a feeling that I'm back at home. It's very busy. A lot of loud people. I am loud too actually. There is a lot of food that you can grab and a lot of things to do. You can hear the sound of the cooking.

So, it's kind of like a busy scene where people just decide to eat outside. In Jakarta, we are very busy with our daily lives. Most of the time we can't cook dinner. This is kind of the place where people usually gather and they decide to eat whatever they want. A family of four can decided that a mom is going to eat this, but I prefer this, so I can grab myself another food. So there's a lot of food at once on a table, and then you eat together. Sometimes you share. It's fun, and a bonding time.

If you ask me about my generation and my father's generations, we have very different opinions about things. My dad had no luxury in finding creativity. He just worked to let us live. My dad used to be very skeptical about my food blogging: "Why are you doing this? You are not making money. You are not doing good things." But as time passes, my dad is starting to see what I try to do. He's starting to understand that you can do things on social media. You can share ideas, you can share your work. My photos of food and opinions about food, I can do it all with social media. So he's starting to see the good side. For now, our generation, we have the luxury to do a lot of things. We have the liberty to explore what we want, what we are interested in. That's why social media is our reach to a lot of things. 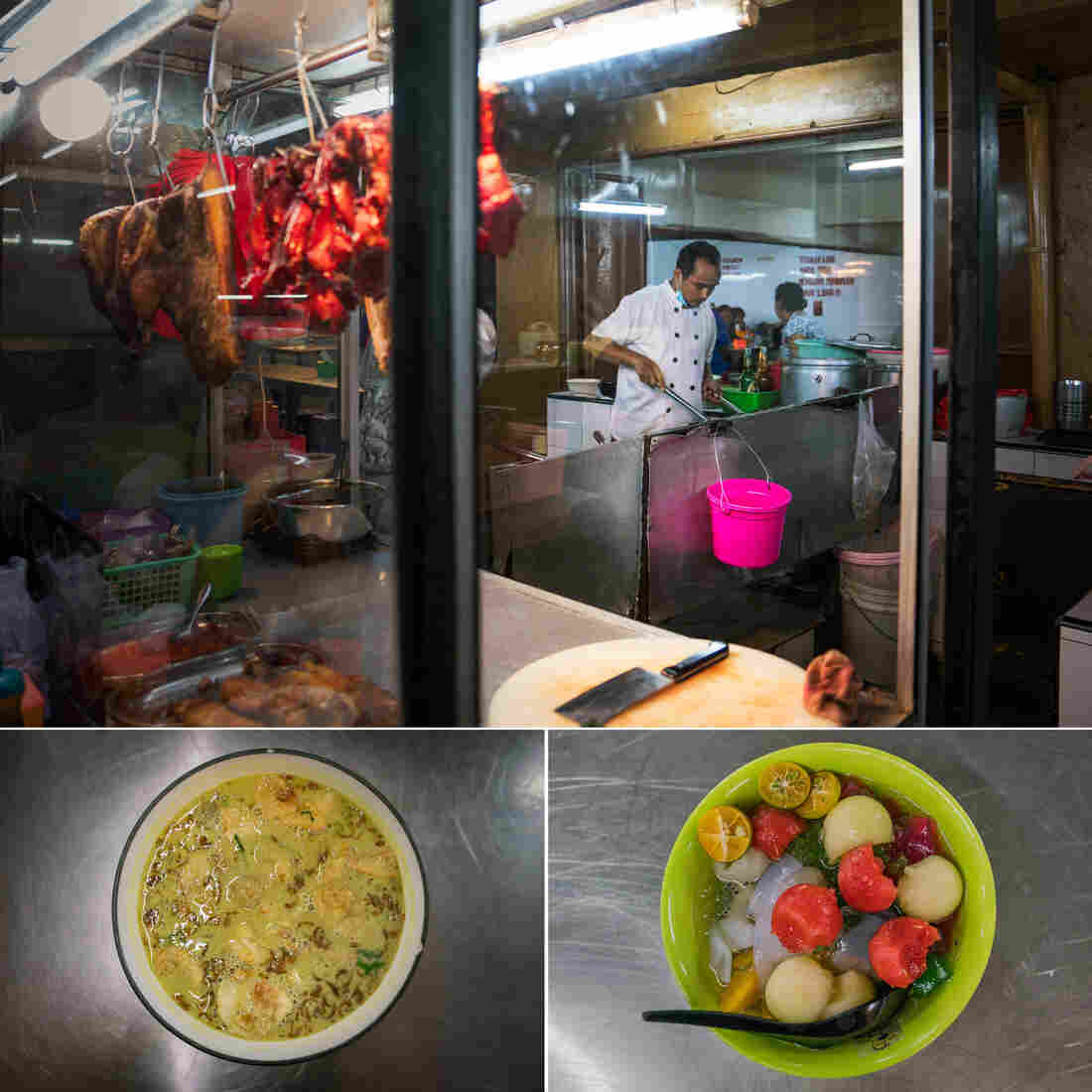 My parents also taught me to embrace a lot of things, including food. Every time [my mom] would visit a country, she really wanted to practice that cooking and let us taste the food, because we didn't really get to travel a lot. My mom tried to teach us that there are many differences in food, in the particular feel of it. So in that way I was raised to be very open toward differences, and I am proud of it because now I am the type of person who doesn't really care about where you belong, what's your religion, what is your race.

On the diversity of people and cultures in Indonesia

We are all very different. There are a lot of tribes, a lot of ethnicities here. But the foundation of our Indonesia is that we love the differences. We embrace it and we build as one society. So I think that we have certain sparks that make us all unique, and at the same time, we like to work together and appreciate all people. 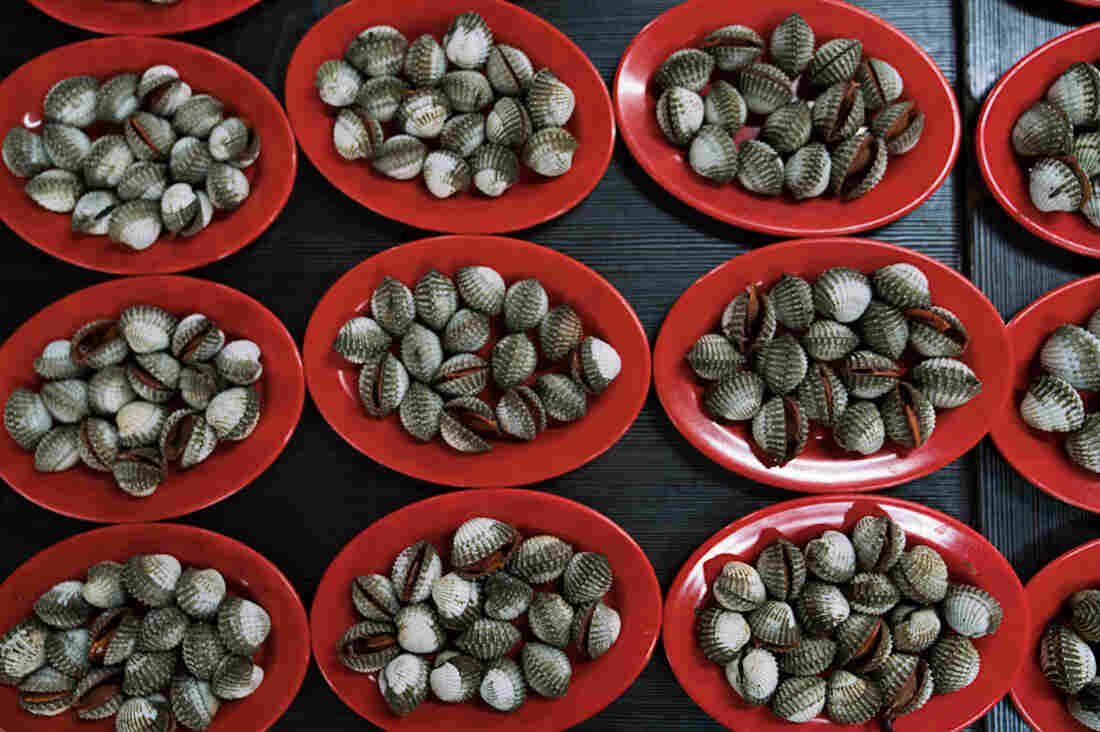 Plates of blood clams are on display at a stand in one of Jakarta's outdoor food courts. Claire Harbage/NPR hide caption 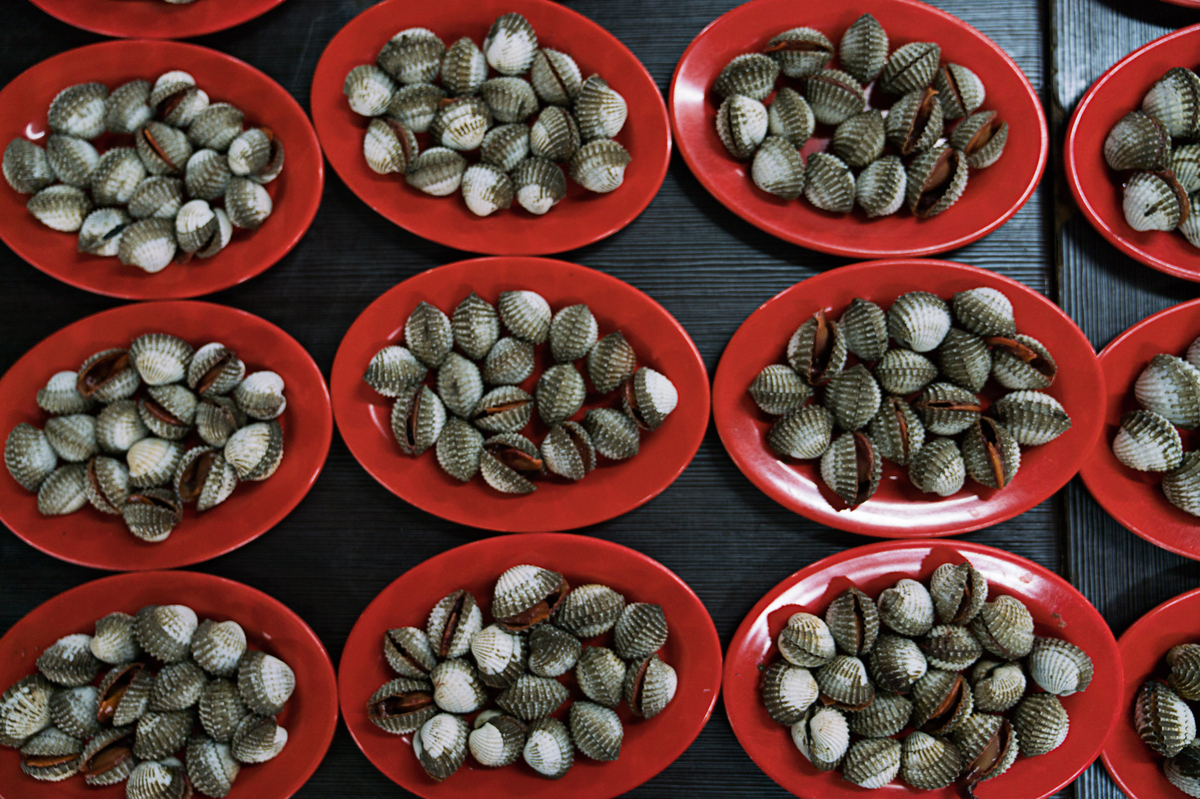 Plates of blood clams are on display at a stand in one of Jakarta's outdoor food courts.

But there is a resistance to change. A lot of people say, "Oh I just want to hang out with Chinese people," or "I just want to hang out with Sundanese people." So a process like that will, of course, spark some controversy. But it is necessary for us to have experience with that controversy. I still look at it positively. We are trying to embrace each other with our differences, despite some groups being a bit extreme in saying no.

On social media bringing people together

At the beginning, when I started my Instagram account and my food blog, I already had in mind that I wanted to embrace people of all countries. I love the differences in us. I used to dream of studying abroad in America or Australia, which was impossible for me at the time due to my financial situation. So I thought about trying to blend in with people, trying to know their culture, trying to know how they're thinking. Is it the same as me? Is it how I think of my life, my situation, my country? 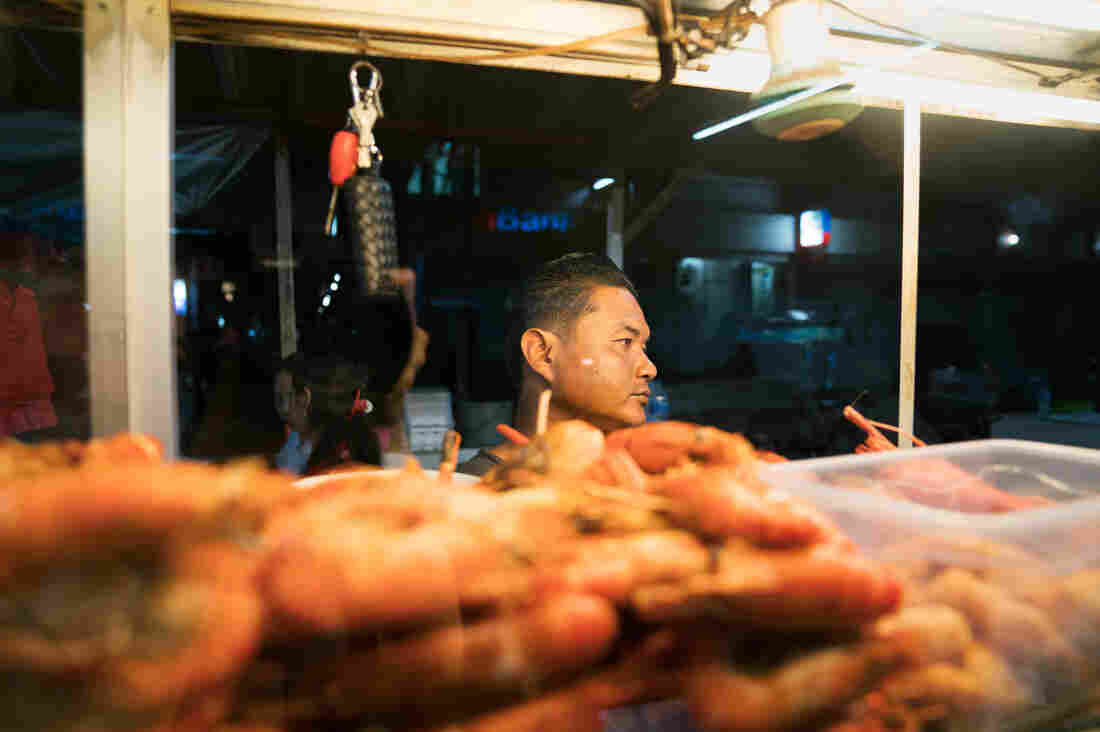 Engkas Kosasih prepares popiah, a spring-roll like dish from from Medan. They come either deep-fried or steamed. Claire Harbage/NPR hide caption 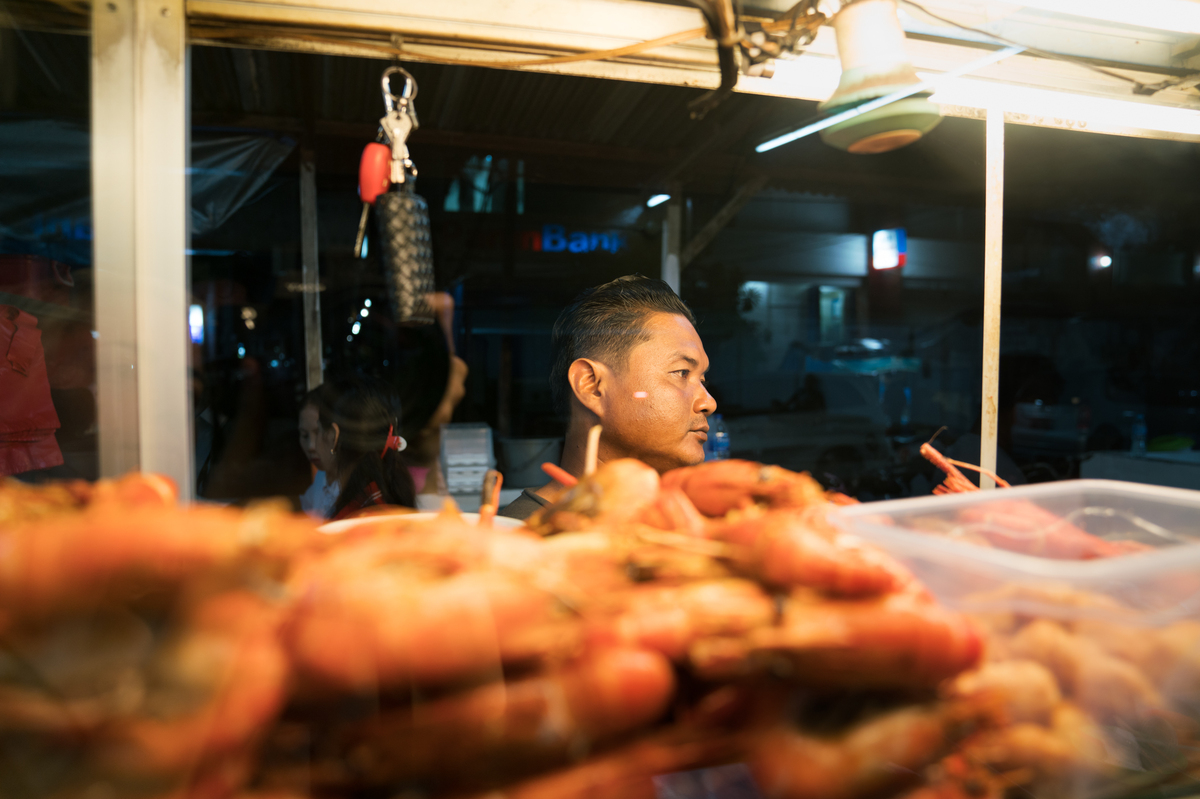 Engkas Kosasih prepares popiah, a spring-roll like dish from from Medan. They come either deep-fried or steamed.

I think it's going to be very different. So I had already decided to try to open my eyes and embrace the differences in all nations. Now, my followers are from America or India, and I have never been there. But I started engaging with people through Instagram and I started asking for opinions about Indonesia, the food here, have you been here? And some of them will respond to me and say things like, "Wow your country is rich in a lot of things, and your food seems very nice, very delicious. I wish to visit the place someday."

... and the flip-side of social media

I actually experience a lot of positive things [on social media], but I can't deny that a lot of negative things happen, too. I'm trying to be positive all the time, but I'm not blind. I see a lot of unfair things happen. People mistreat and misuse social media to spark something or stir something up in society. If you ask me what can I do about it? I don't really know the answer. It's a double-edged sword for us. You can use something for good, but you can also use it for bad things — and that happens in our society. I just hope people can sit and eat and laugh together.