Accessibility links
Shark Fin Trade Faces Troubled Waters As Global Pressure Mounts : The Salt Congress is once again considering a federal ban on shark fins, used in soup. But scientists are divided about whether a ban is the best way to protect the creatures, which are imperiled worldwide. 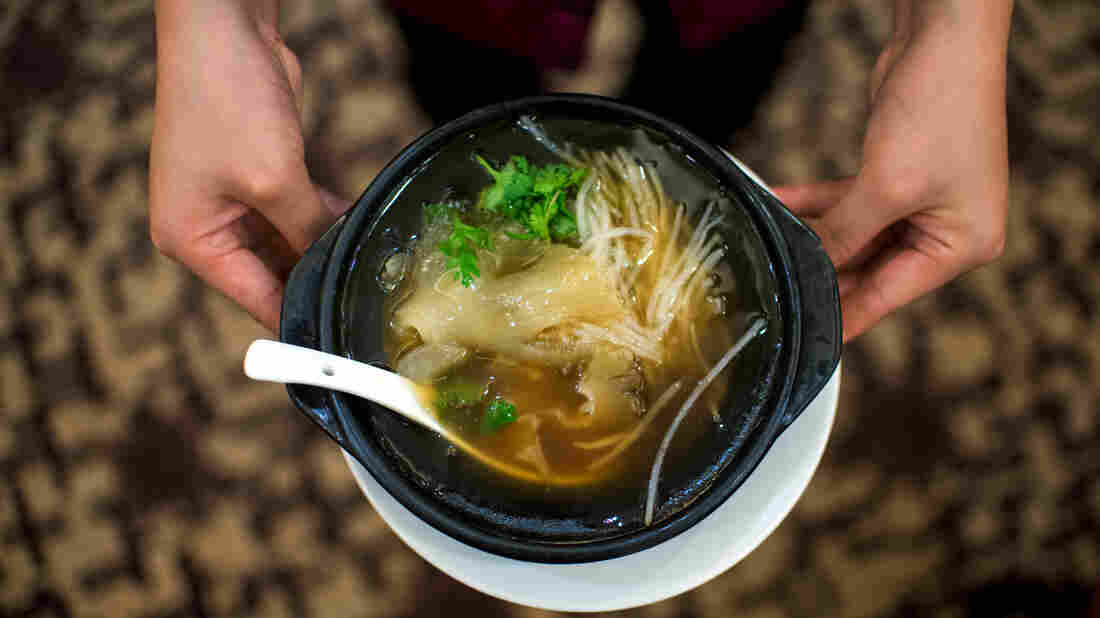 A waitress serving shark fin soup in a restaurant in Guangzhou, in southern China's Guangdong province. Environmental and animal rights groups have campaigned for decades against consumption of shark fin, arguing that demand for the delicacy has decimated the world's shark population and that the methods used to obtain it are inhumane. Johannes Eisele/AFP/Getty Images hide caption 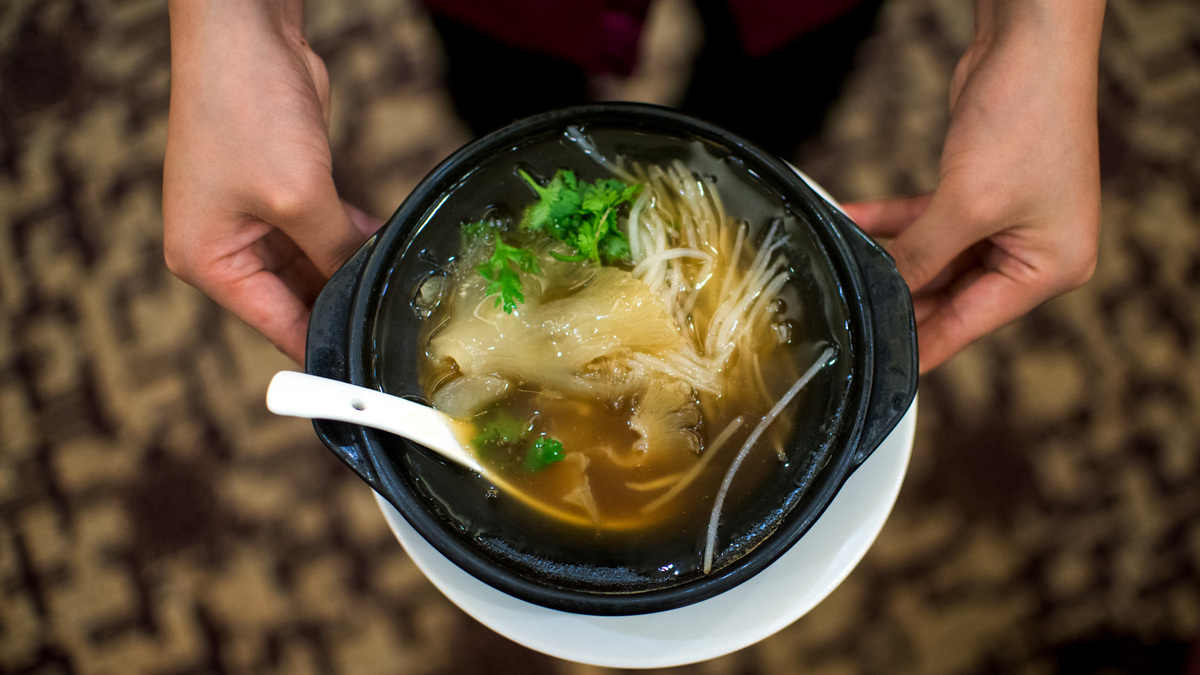 A waitress serving shark fin soup in a restaurant in Guangzhou, in southern China's Guangdong province. Environmental and animal rights groups have campaigned for decades against consumption of shark fin, arguing that demand for the delicacy has decimated the world's shark population and that the methods used to obtain it are inhumane.

At many Chinese restaurants in the United States, there's a special dish called shark fin soup. It's expensive — a delicacy and status symbol in Chinese culture that's served during banquets.

The soup is a hotly debated item in both the scientific and political communities, and it's illegal in 12 states, including Hawaii, Illinois and Texas.

Now, Congress is once again considering a federal ban on the shark fin trade.

Two bipartisan bills, one in the House and one in the Senate, would make it illegal to possess, buy, sell or transport shark fins in the United States. House and Senate politicians introduced similar bills last year, but they didn't make it out of committee.

The new Senate bill asserts that many shark populations are in peril worldwide, and that some fishermen harvest shark fins by finning, a "cruel practice in which the fins of a shark are cut off" on a ship at sea, and the rest of the animal is "then thrown back into the water to drown, starve or die a slow death."

A 2013 study in the journal Marine Policy estimates that between 63 and 273 million sharks are killed each year, including those killed for their fins.

But not all scientists agree that banning shark fins would be the way to protect sharks. Last month, two marine biologists wrote in Marine Policy that a ban would not prevent sharks from being killed worldwide.

David Shiffman, a marine biologist who co-wrote the article, studies sharks at Simon Fraser University in British Columbia, Canada. He says that shark fisheries in the U.S. harvest sharks sustainably, shark finning has already been banned, and if the U.S. just withdraws from the shark trade altogether, it'll be harder to encourage other countries to follow the U.S. lead in adopting the same kinds of policies.

Scientist Neil Hammerschlag of the University of Miami pushes back on that argument, explaining that the U.S. can only lead by example for countries that have the same resources that the U.S. does, including infrastructure to enforce fisheries management.

"But the same policies would not work in some of the big fishing countries which don't really have the capacity," he says.

Several conservation groups, including the nonprofit Oceana, responded to Shiffman's article against the ban in Marine Policy, saying that if the U.S. allows imports of shark fins from countries that don't have sustainable practices, like Myanmar and China, then it is "complicit in the catch of at-risk species and condoning their lack of finning regulations." They say they support the bill because it aims to eliminate U.S. demand for shark fins altogether.

Lora Snyder, an Oceana campaign director for responsible fishing and sharks, explains why she thinks the U.S. should just get out of the global fin trade altogether:

"Demand for shark fins is one of the primary drivers of population declines of these species," she says, drawing a comparison between shark fins and the ivory trade. It is a global problem, she says, which "needs a global solution."

Snyder points out that 150 scientists came out in support of the shark fin ban — in an open letter of support, they called shark conservation "one of the most pressing biodiversity issues today."

"Science is saying sharks are in trouble," Snyder says. "It's necessary to look at policy solutions that are rooted in science through multiple lenses."

Shelley Clarke is a fisheries management scientist who has studied the shark fin trade in Hong Kong and works with the United Nations' Food and Agriculture Organization. Like Shiffman, she's skeptical of the idea that the U.S. needs to get out of the trade altogether.

"I would rather focus on the point of the kill, which is on the water, determining what the fishermen do with the sharks that are caught on their fishing lines, and making sure that the number of sharks that are killed every year in fisheries is at a sustainable level," she says.

She works with tuna fisheries to gather better data on how many sharks are caught, which species are most at risk, and how to manage populations through measures like catch limits.

"I think at some point we're going to need to draw a line in the sand and say, 'You can't catch any more sharks than this, because we don't believe the populations can keep pace with that,' " she says.

The shark fin trade is being pressured worldwide, even in China and Hong Kong, a global hub for the trade.

Ernest Kao, an environmental reporter in Hong Kong, says these multinational companies are responding to pressure from conservation groups like WildAID and the World Wildlife Fund.

He adds that even the Hong Kong government stopped serving shark fin at official events, partly citing conservation concerns. After the Chinese Communist Party banned shark fin at official dinners in 2013 to fight "extravagance," the trade dropped significantly the following year, though Kao says that drop has mostly leveled off.

He says traders he has spoken to are not pleased, but know there's not much they can do.

"Many of these traders actually are feeling the hit," Kao says. "They are expecting demand for shark fin to go down in the long run, so many of them are actually switching to more trade in other seafood or dried marine products."

But regardless of a ban, Hammerschlag says that eating shark fins or shark meat is a health risk.

"One thing that I think potentially people should be aware of when it comes to shark fin ... is that they do have toxins in them," he says.

Sharks are toward the top of the food web, so they have higher levels of mercury and other toxins that have been linked to degenerative diseases such as Alzheimer's and dementia.