Accessibility links
WHO To Farmers: Stop Giving Your Animals So Many Antibiotics : The Salt The World Health Organization is calling for strict limits on antibiotic use in animals raised for food. The guidelines could push many countries, including the U.S., to restrict drug use on farms.

WHO To Farmers: Stop Giving Your Animals So Many Antibiotics

WHO To Farmers: Stop Giving Your Animals So Many Antibiotics 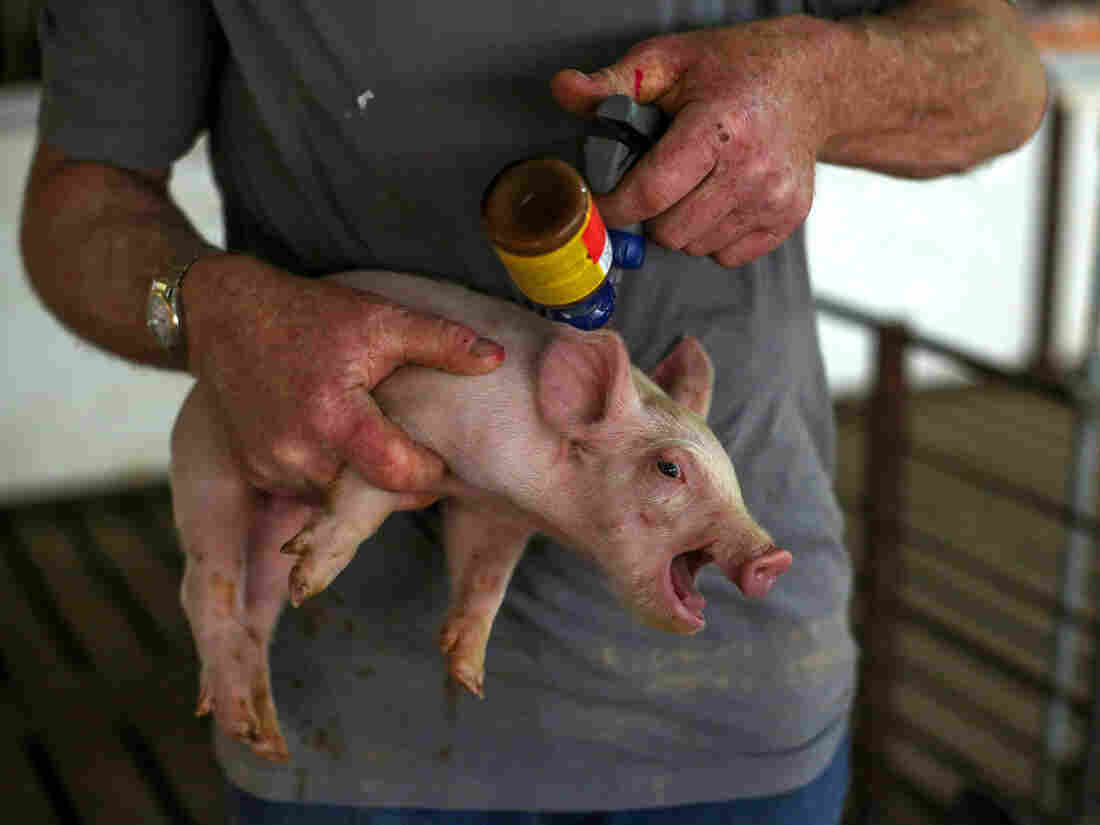 A piglet gets a shot of antibiotic at a farm in Illinois. The World Health Organization is calling for strict limits on antibiotic use in animals raised for food. The guidelines could push many countries, including the U.S., to restrict drug use on farms. Stacey Wescott/Chicago Tribune/TNS via Getty Images hide caption 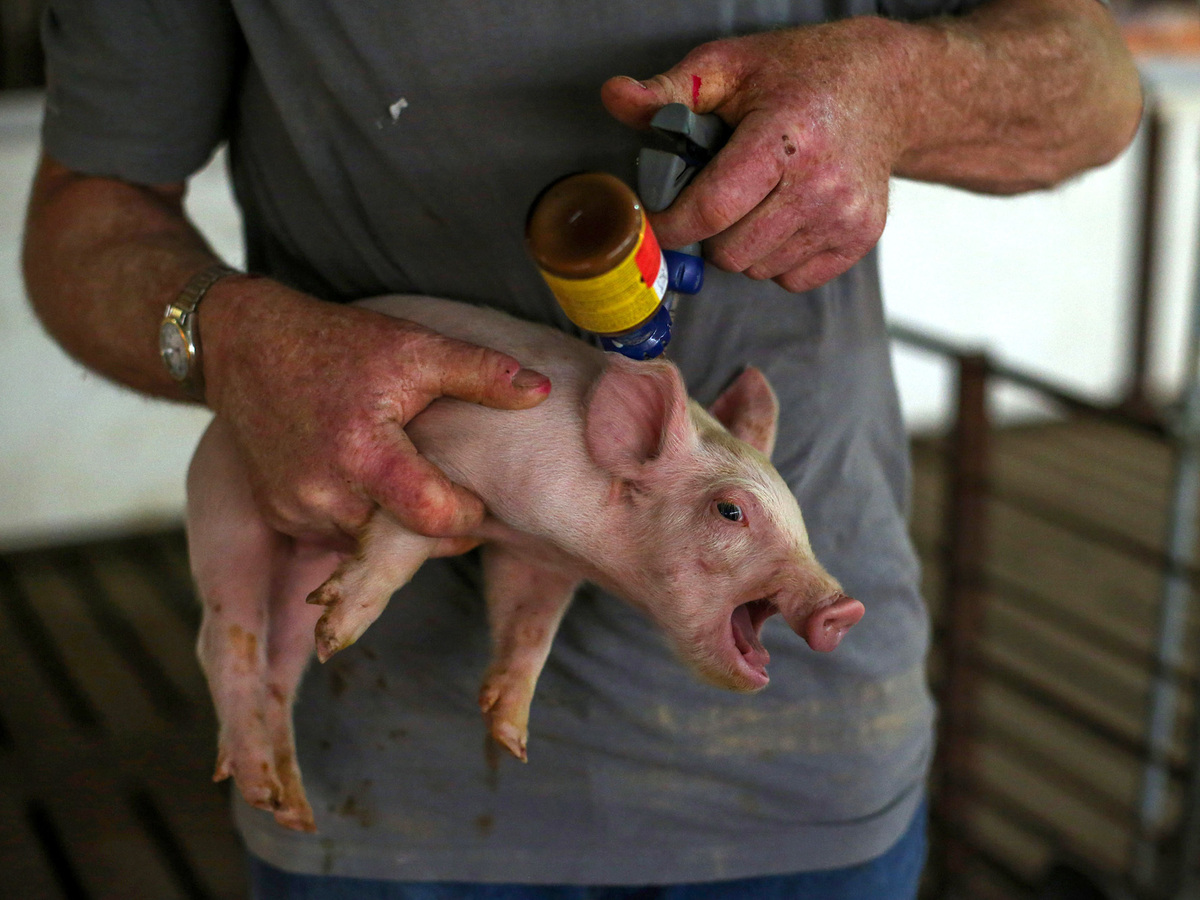 A piglet gets a shot of antibiotic at a farm in Illinois. The World Health Organization is calling for strict limits on antibiotic use in animals raised for food. The guidelines could push many countries, including the U.S., to restrict drug use on farms.

The World Health Organization, worried about an increasing epidemic of drug-resistant infections, has thrown its considerable weight behind the campaign to cut the use of antibiotics in pigs, chickens and cattle that are raised for their meat. The WHO is calling on governments to follow the example of Denmark and the Netherlands, which have banned the use of these drugs to make animals grow faster, or simply to protect healthy animals from getting sick.

The "over-use and misuse of antimicrobials" has occurred both in human medicine and on farms, says Marc Sprenger, a scientist at WHO. But in sheer quantity, the amount of antibiotics used on farms far exceeds what's used to treat people in many countries, including in the U.S.

"It's very important that we reduce use in human medicine and in animal production," says Kazuaki Miyagishima, director of the Department of Food Safety at the WHO.

The WHO has now issued its first formal guidelines for how these drugs should be used on farms. According to these guidelines, antibiotics cannot be used to promote faster growth or merely to prevent disease in healthy animals. The WHO called on veterinarians to avoid the use of antibiotics that are most critical in human health. The agency also wants governments to ban the use in animals of any new antibiotics that scientists may discover in the future.

These guidelines are stricter than current policies in the U.S. The Food and Drug Administration has worked with drug manufacturers to ban the use of antibiotics to promote faster growth, but it still allows veterinarians to prescribe these drugs for the purpose of disease prevention.

The greatest impact of the new guidelines, however, may be felt in countries like China, home to more than half of the world's pigs, where antibiotics have been used even more heavily than in the U.S.

"It's fair to say that they use more than the U.S., but I don't know how much more," says Jishu Shi, director of the U.S.-China Center for Animal Health at Kansas State University.

Shi says policies in China are changing, however. The Chinese government is starting to require that some antibiotics only be used in animals if prescribed by a veterinarian. In addition, some Western food companies are pushing their Chinese suppliers to reduce or even eliminate antibiotic use. McDonald's, for example, has promised to buy only chickens from suppliers that have stopped using drugs that are most important in human medicine. This policy will go into effect starting next year for suppliers in the U.S. and Europe, but only in 2027 for suppliers in China.

The effects of overusing antibiotics don't stop at national borders, because drug-resistant bacteria can spread around the globe, compromising the ability of drugs to fight infections. "Antimicrobials are a global public good, and we all should be working together to preserve them," says Awa Aidara-Kane, coordinator for the Department of Food Safety at the WHO.

Public health advocates in the U.S. praised the WHO's new guidelines. David Wallinga, with the Natural Resources Defense Council, wrote in a blog post: "let's hope the strong new WHO Guideline spurs more companies and more countries to take the actions that need to happen. Before it's too late."

The National Pork Producers Council, on the other hand, condemned the WHO's proposals to ban the use of drugs for disease prevention, and to stop using drugs that are most critical for human health. According to the NPPC, such a ban "is antithetical to pork farmers' and veterinarians' moral obligation to care for their pigs."