Accessibility links
Foodies Say Fall Is The Best Time To Eat In Paris : The Salt In his new book, food historian David Downie takes readers on a gourmet jaunt through time to reveal how the French capital became a gastronomic powerhouse. (Hint: You can thank Rome.) 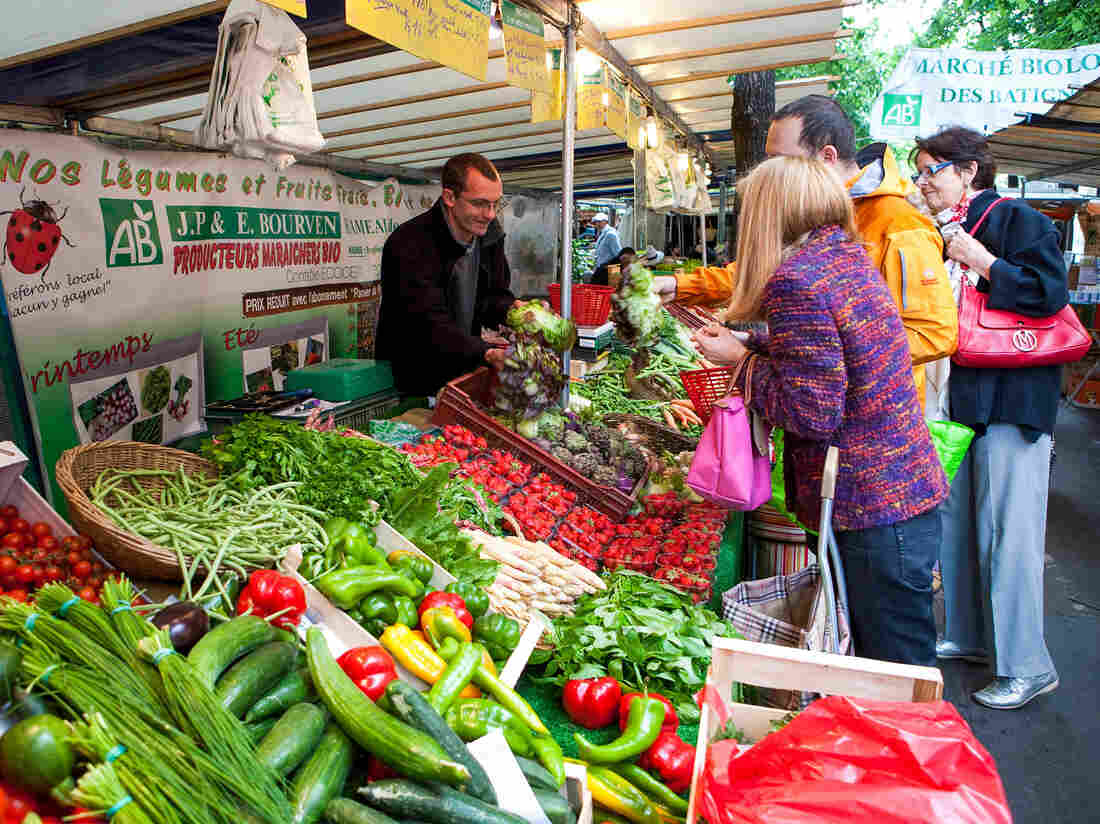 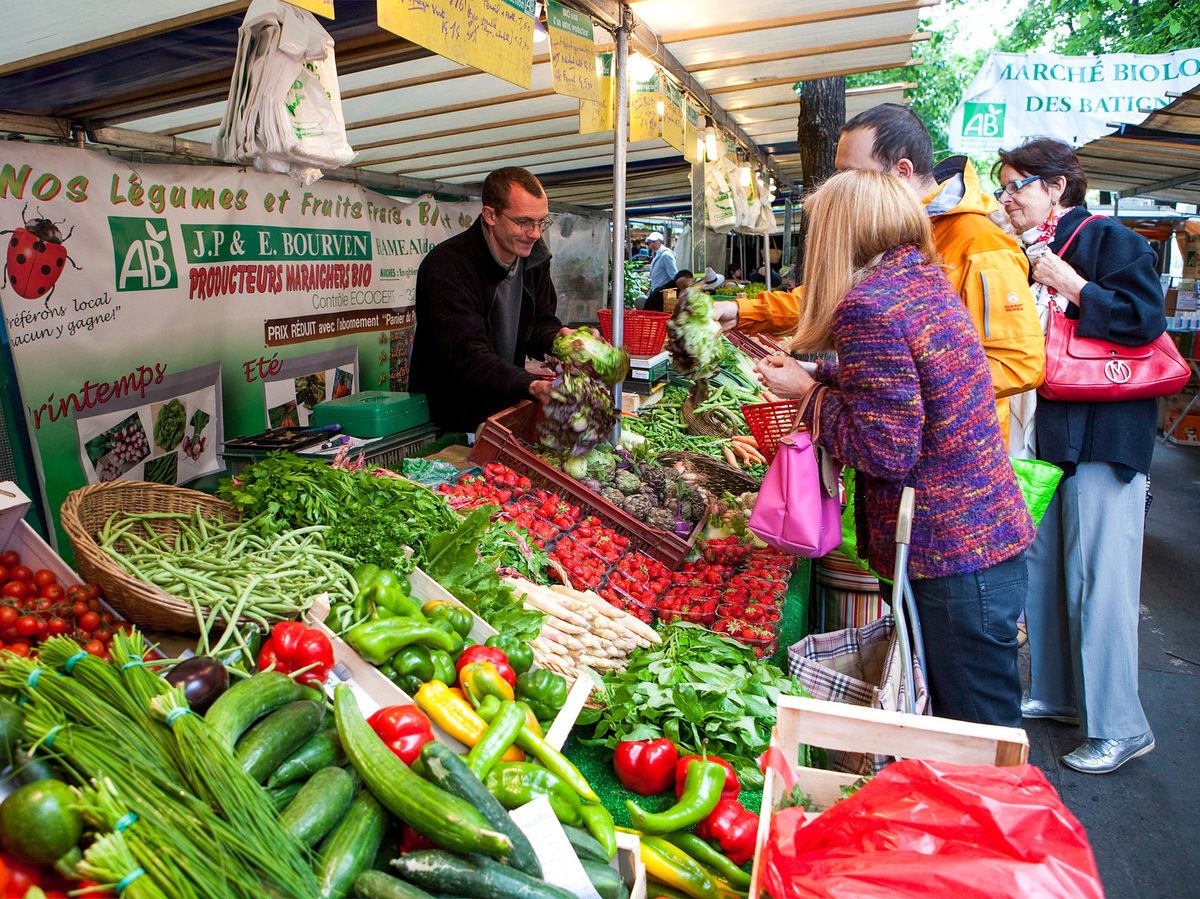 An organic market on Boulevard des Batignolles in Paris.

This time of year, the stands at Paris' hundreds of weekly food markets are laden with plump, dark grapes and wild mushrooms. Wild game often hangs from hooks above.

Of all the seasons to visit Paris, food lovers say the best time is autumn.

"The fall is the best time to eat in France," says longtime Paris resident and culinary historian David Downie. "Everyone knows that. It's when everything comes in. It's the harvest season."

Downie's latest book, A Taste of Paris: A History of the Parisian Love Affair with Food, is a gastronomic jaunt through the city that tells how Paris distinguished itself as a world capital of eating. Downie says Julius Caesar, who conquered what was then called Gaul in 52 B.C., had a lot to do with it. He says:

"You could argue that without the ancient Roman presence in Paris 2,000 years ago — and they stayed 500 years — you would never have had the culinary culture that developed in this country. The Gallic peoples who were here when the Romans arrived were not gourmets. That's the polite way of saying that they were, you know, complete barbarians. They ate a lot of raw things and they had very basic food. The Romans had extremely sophisticated cuisine."

Parisian Alex Ryerson is choosing girolle and cepes mushrooms from a pile of fungi at a market stand. The vendor is telling him how to choose the best ones. A tip: Look for the mushrooms whose edges have been nibbled by discerning French slugs. Ryerson says Parisians love their street markets, which are stocked with foods of the season. 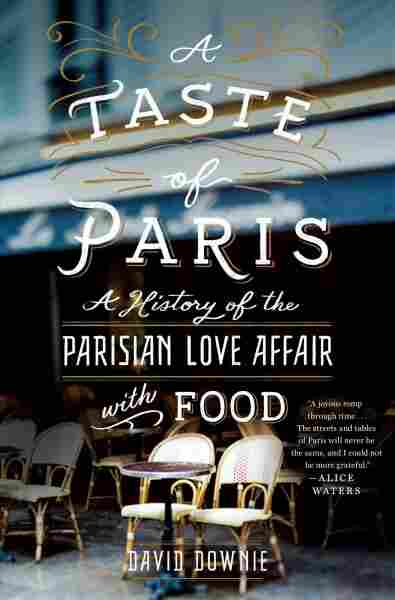 A Taste of Paris

A History of the Parisian Love Affair With Food

"For sure, it's important to eat fresh," he says. "Anywhere. Even in the States. And it's starting there. More and more people are going to the markets. Here it's just part of the culture, which is great."

Ryerson says he eats his cepes mushrooms very simply. "I sauté them in a pan with garlic and butter. That's it," he says.

At a fish stand, glassy-eyed mackerel stare up from the ice. Octopus and squid are jumbled in a pile and there are crates of sea snails, known as bigorneaux. Fish monger Jacquie Lorenzo says his offerings also change with the seasons.

"In the fall we find bream, John Dory, halibut and flounder," says Lorenzo, "because the waters are getting colder. And of course coquilles St. Jacques season begins Sept. 30. Lorenzo is talking about the giant shelled scallops that are so popular in France.

Another fall food that the French relish — just as the Romans did — are oysters. And in September the mollusks are back in season after four months of reproducing. As the weather gets colder, you can find oysters on icy stands at markets and corner cafes across the city.

At a wide counter on the sidewalk in front of a seafood restaurant, Jerome Chetif is prying open oysters to fill a giant seafood platter. 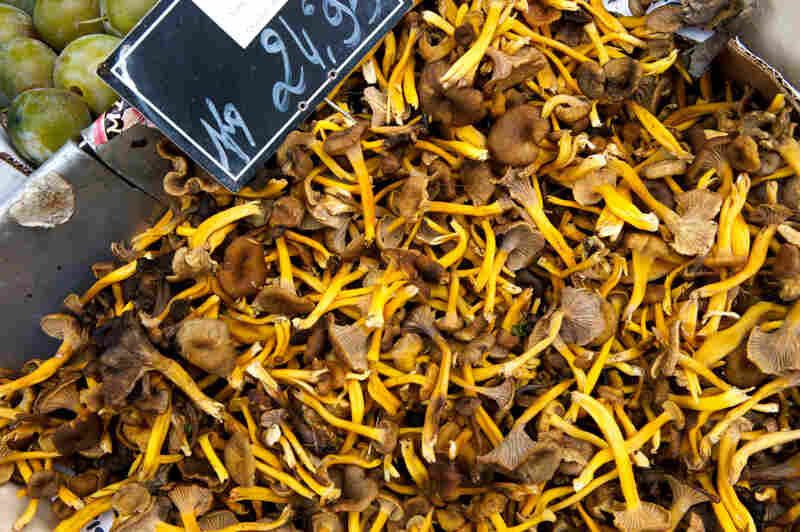 Food lovers say fall is the best time of year to eat in Paris, with fresh vegetables, fish and other delicacies at their height. Oliver Strewe/Getty Images/Lonely Planet Image hide caption 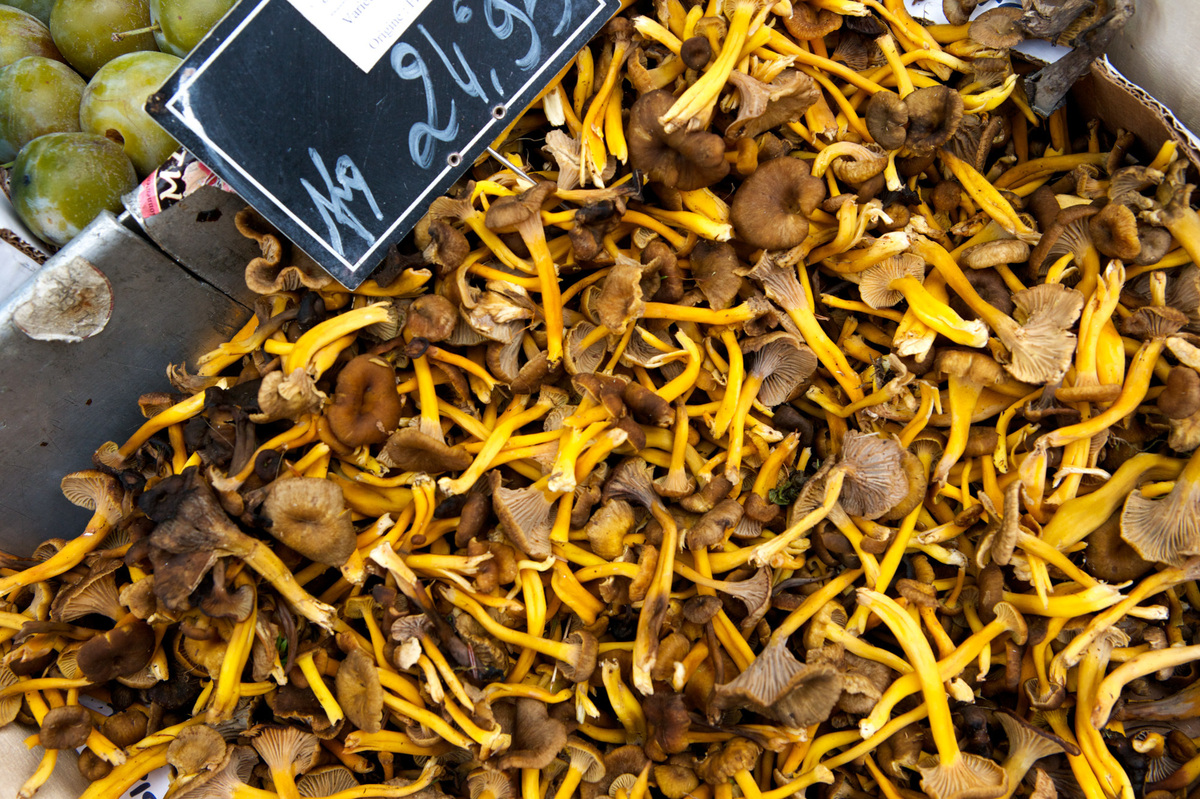 Food lovers say fall is the best time of year to eat in Paris, with fresh vegetables, fish and other delicacies at their height.

"You see, when I open them they're still alive," he says. "We French like to eat them raw. That's the best way."

Downie says Louis XIV adored oysters and revived the Roman tradition of ingesting them raw. He says France's Sun King advanced the notion of a uniquely French cuisine in the 1600s as he consolidated feudal France. Up until then, the French had eaten much as others across medieval Europe.

"His big schtick was to distinguish France as a kingdom from Burgundy, from southern France, from northern France, from the dukedoms, and that's why French cuisine became part of a soft-power diplomacy of trying to take over all of France," Downie says. "Then later he used cuisine to project things French abroad."

Downie says since the time of Louis XIV, the best food can always be found in Paris.

"The reason Paris has great food in modern times is because of money," he says. "All the best stuff gets rushed to Paris because this is the best market. There are rich families and demanding eaters here."

Downie tells many tales of fascinating episodes in French history. Rue St. Antoine was once a Roman road, then a medieval thoroughfare where he says King Henry II was skewered through the eyeball in a jousting match.

Today the street is full of good eating. 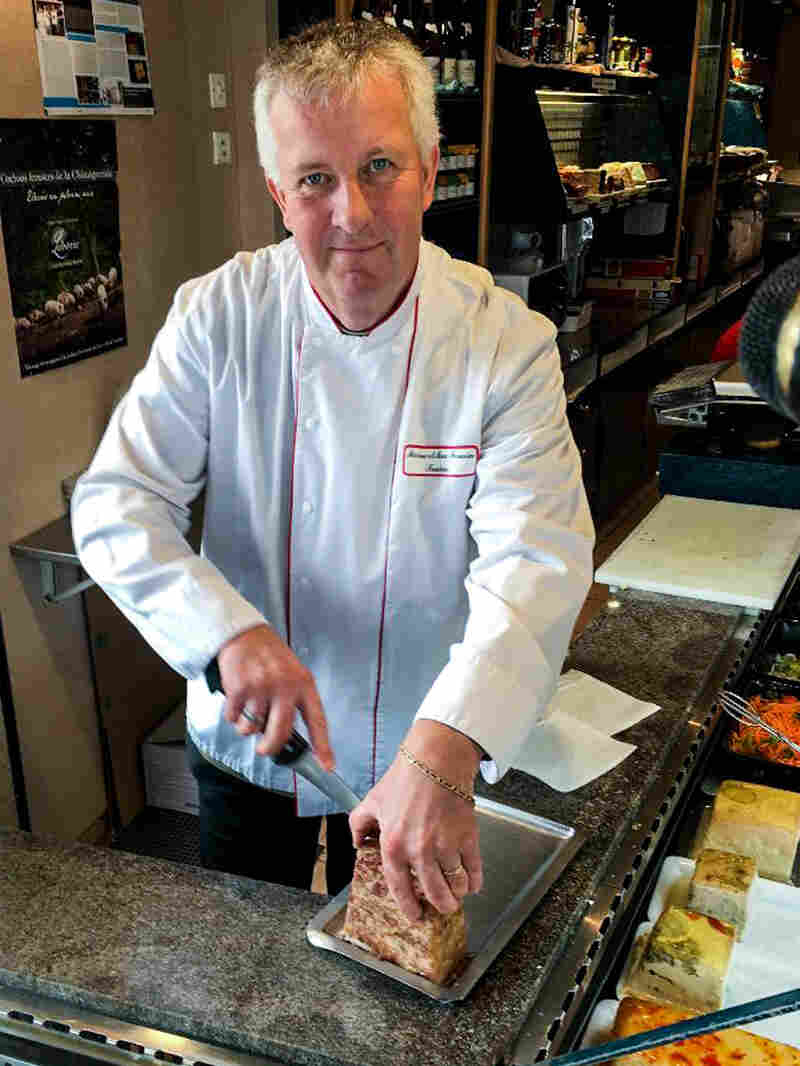 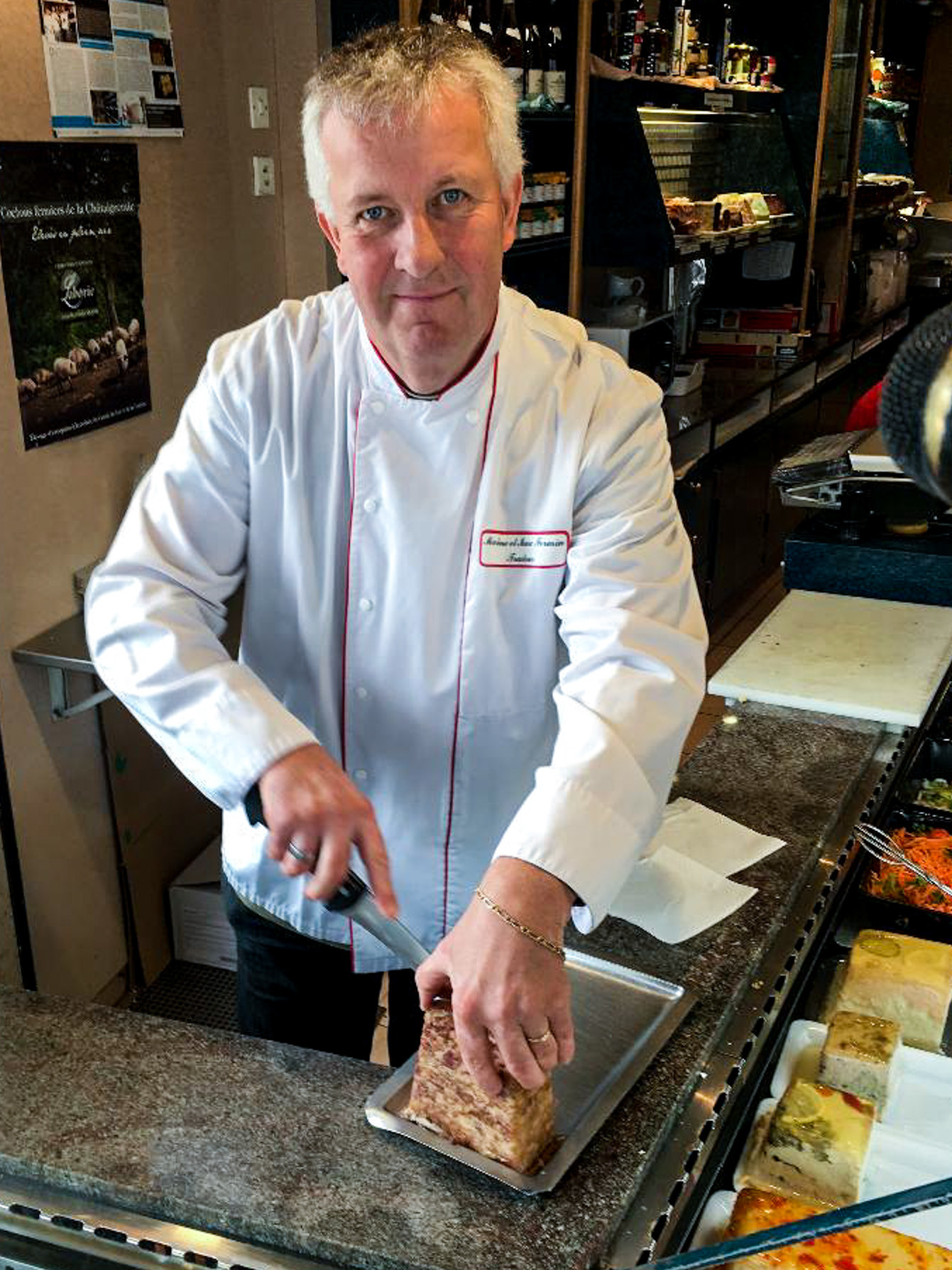 Stopping at a charcuterie, or delicatessen, with vast offerings, owner Marc Fermin explains how fromage de tête, or literally, head cheese — a big square of pate with a gelatin top — is made.

"Head cheese is the pig's head — the snout, cheeks and tongue, boiled all night in carrots, onion, thyme and laurel. Then we let it cool, cut it into cubes, make a reduction with white wine and shallots and my secret seasoning, then bake it in the oven."

The head cheese spreads nicely on a fresh baguette, and can be accompanied with a little hot mustard — washed down with a glass of red or white wine.

Downie says eating well in Paris often means going out of your comfort zone and getting off the main tourist drag.

At a corner bistro nearby, everything's made from scratch — which is not always the case in Paris anymore.

Another good tip: Ordering from the daily, chalkboard menu.

The tender slices of meat that arrive look nothing like tongue. It's served with gribiche sauce.

"The sauce goes perfectly with its pickles and capers and mayonnaise," says Downie. "You would never know what it is. It's absolutely delicious."