Accessibility links
You Can't Hide From Calorie Counts: FDA Will Implement Obama-Era Rule : The Salt The FDA had previously halted the roll out of rules requiring chain restaurants and other food establishments to post calories on menus. Now, the agency says the rules will be in place by May 2018. 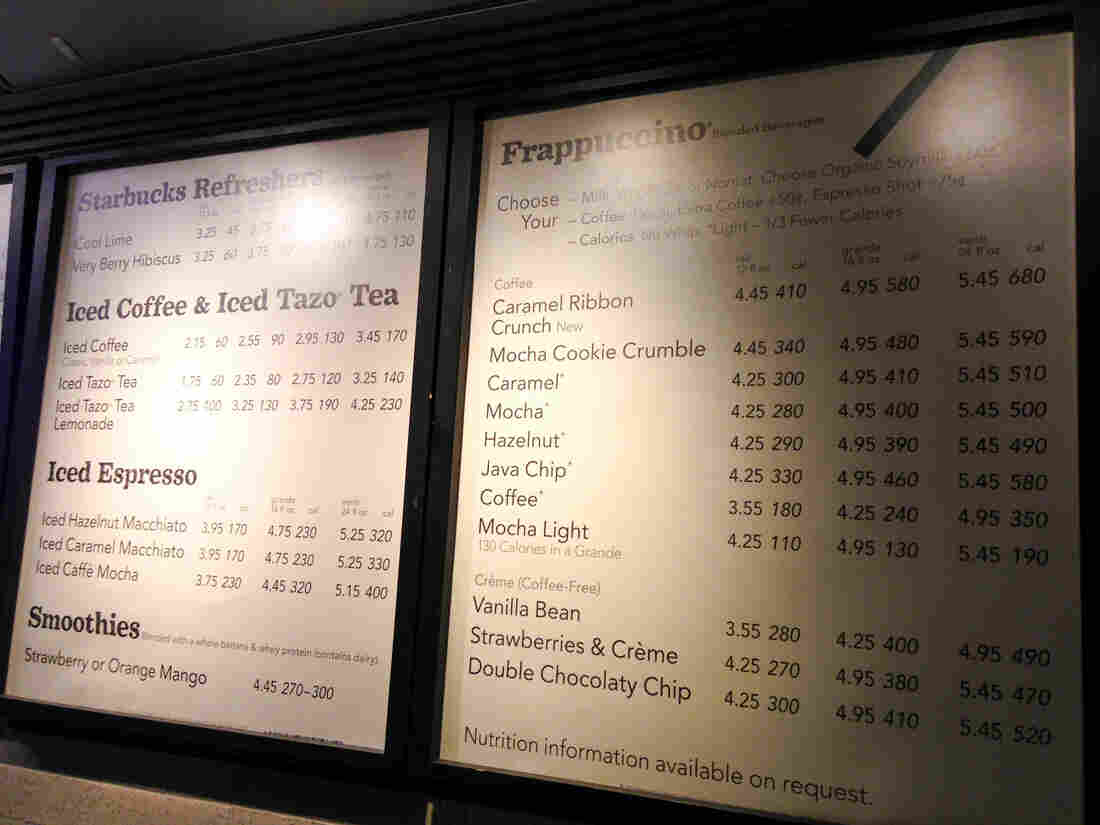 A menu board shows calorie counts hangs at a Starbucks in New York City. The FDA had previously halted the roll out of rules requiring chain restaurants and other food establishments to post calories on menus. Now, the agency says the rules will be in place by May 2018. Candice Choi/AP hide caption 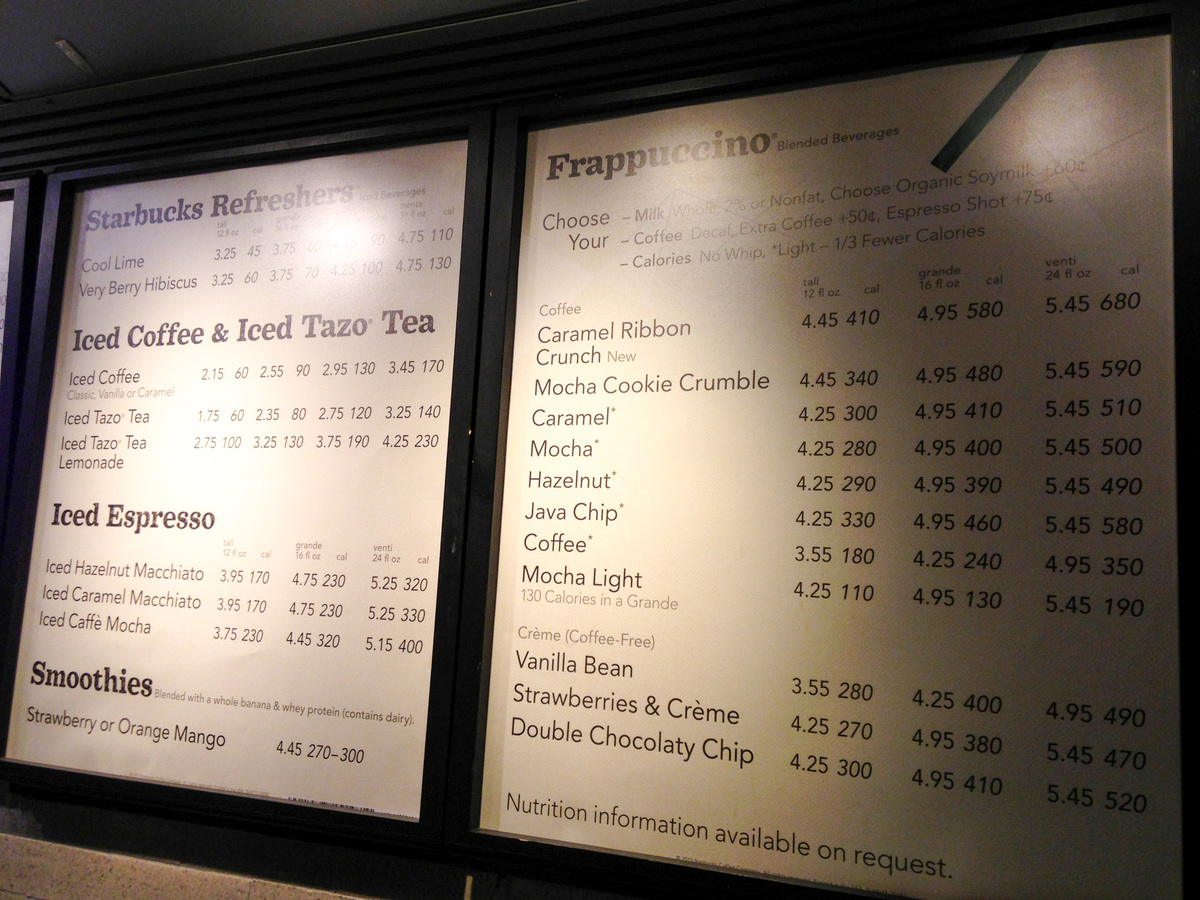 A menu board shows calorie counts hangs at a Starbucks in New York City. The FDA had previously halted the roll out of rules requiring chain restaurants and other food establishments to post calories on menus. Now, the agency says the rules will be in place by May 2018.

Scott Gottlieb, the Food and Drug Administration commissioner appointed by the Trump administration, has this in common with Michelle Obama: He wants to know what's in the food he eats.

And this, it seems, includes calorie counts.

Now, the FDA has released its guidance on implementing an Obama-era rule that requires chain restaurants and other food establishments to post calories on menus or menu boards. The mandate was written into the Affordable Care Act back in 2010.

"The information we get in restaurants and take-out meals isn't consistently available," Gottlieb wrote in a release announcing the guidance.

"At a time when more than a third of U.S. adults are obese and more people are trying to make healthier lifestyle decisions," Gottlieb added, "we know making informed choices about our diets has the potential to save and improve lives."

The FDA will aim to implement the new rules by May 2018. And Gottlieb says he's "committed to making sure we implement these provisions in a way that is practical, efficient and sustainable."

As we reported, back in May, the FDA announced it was delaying implementation, amid complaints from industry groups that the calorie-posting rules were too hard to comply with. An association of convenience stores petitioned the FDA, asking the agency to reconsider its rules. One of their arguments was that it's hard to label calories on take-out food, if the portion sizes vary.

Nutrition advocates were vocal in their disappointment over the delays. But now, there's relief that the FDA is moving forward.

"Consumers need and want calorie information when they eat out, and this is a positive sign that FDA will work with industry to give consumers that information," writes Margo Wootan of the Center for Science in the Public Interest, in a statement on the FDA's guidance.

Going forward, once a final rule is in place, Wootan says the hope is that we'll all be seeing more calorie information — including in the deli and take-out sections of grocery and conveniences stores.

"Any food that's on display, like a salad bar or buffet, has to have calories posted, so people can see the information as they're serving themselves," Wootan told us.

The restaurant industry also signaled its support of the guidance put forth by the FDA.

"We are pleased that the Food and Drug Administration took into account the comments from our industry in their menu labeling supplemental guidance document," wrote Cicely Simpson, executive vice president of public affairs of the National Restaurant Association in a statement.

One issue that had been a sticking point was whether supermarkets and convenience stores would be required to place an individual calorie sign next to each item on, a self-serve buffet or salad bar or a beverage station.
"This is one way to comply with the regulation, " the FDA's Gottlieb explains. But there are other options, too. "For instance, a single sign posting that is visible while consumers are making their selection is one way to comply that may provide additional flexibility for some establishments."

"We will continue to work with the FDA to successfully implement federal menu labeling by May 2018," the National Restaurant Association's Simpson concluded.