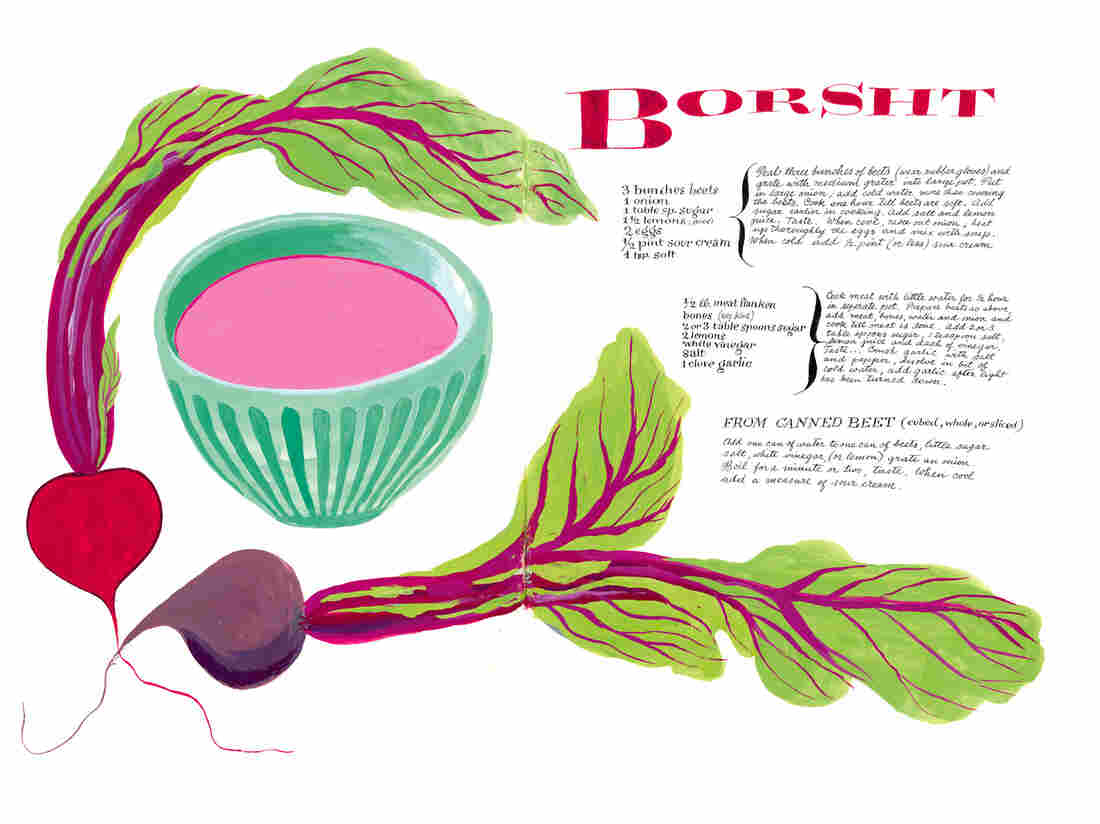 One of Cipe Pineles' many illustrated recipes in the newly published cookbook, Leave Me Alone With the Recipes: The Life, Art & Cookbook of Cipe Pineles. Courtesy of Carol Burtin Fripp hide caption 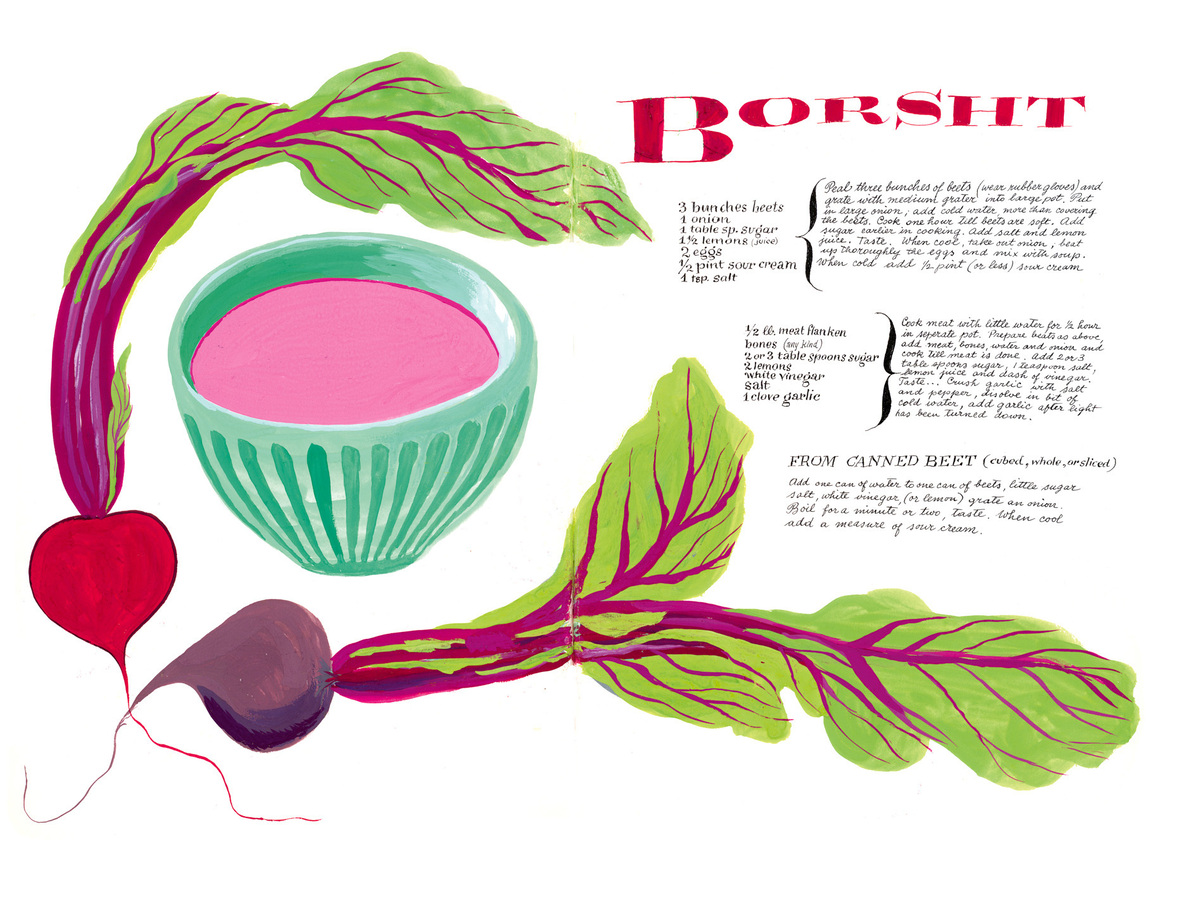 One of Cipe Pineles' many illustrated recipes in the newly published cookbook, Leave Me Alone With the Recipes: The Life, Art & Cookbook of Cipe Pineles.

Graphic journalist and illustrator Wendy MacNaughton was browsing an antiquarian book fair on a Saturday morning in San Francisco when one book caught her eye. "It was open to a spread of a painting of a bowl of bright pink borscht in this gorgeous mint scalloped bowl. It had hand-lettered calligraphy recipes and it was absolutely exquisite," she recalls. 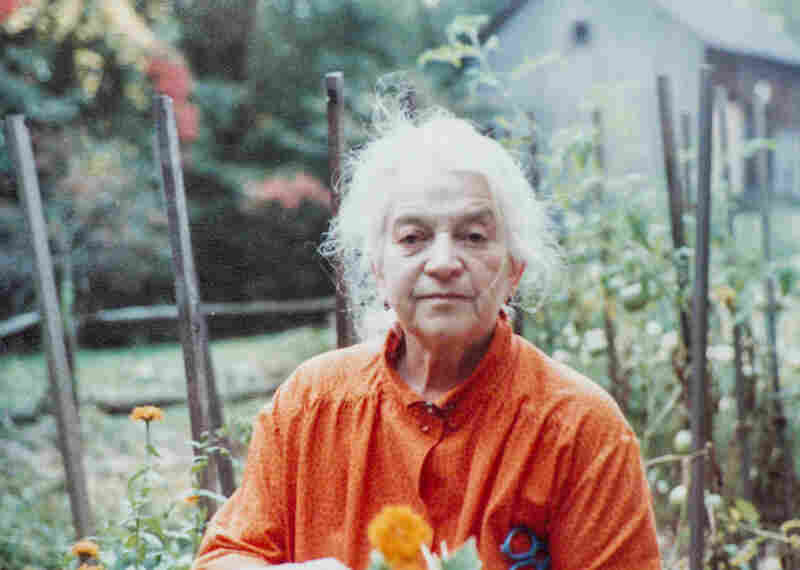 Cipe Pineles, a driving force in design for magazines such as Condé Nast, Glamour and Seventeen, had another, just-discovered project: illustrating her mother's Eastern European Jewish recipes in a cookbook. Baron Stewart hide caption

She had stumbled upon an original 1945 manuscript of a cookbook designed by Cipe Pineles, who as the first female art director of Condé Nast, helped pave the way for women in design in the mid-20th century. Pineles worked on magazines such as Glamour, Seventeen and Charm and taught at Parsons School of Design in New York City. But she had a lesser known achievement: an unpublished cookbook tying together her art and family.

The manuscript had been in Pineles' house for almost 70 years until a collector bought it at the artist's estate sale, according to the book's co-editor Sarah Rich. Rich, a writer and MacNaughton's friend, arrived at the book fair soon after and was also excited about the lucky find. The two teamed up with Maria Popova, a writer and blogger, and Debbie Millman, a design writer and the president emeritus of the Professional Association for Design. The four of them purchased the manuscript and published it as Leave Me Alone With the Recipes: The Life, Art & Cookbook of Cipe Pineles.

The recipes draw from Pineles' Eastern European Jewish roots — Cipe Pineles was born in Vienna and immigrated to the United States when she was 13. Among the spreads of vegetables, pots of stew and slabs of meat that fill the book, a gray-haired woman appears throughout in different scenes. This, says Rich, is Pineles' mother, Bertha Pineles. On the original manuscript's cover, included later in the newly published version, Cipe Pineles credits her mother as the author, as most of the recipes are hers.

Carol Burtin Fripp, Pineles' daughter, says that she believes her mother was trying to keep alive some of her family's experiences before coming to the U.S. "I think it was a way of celebrating the background of the family," Fripp says, "bringing with them some of what they had had in Europe." 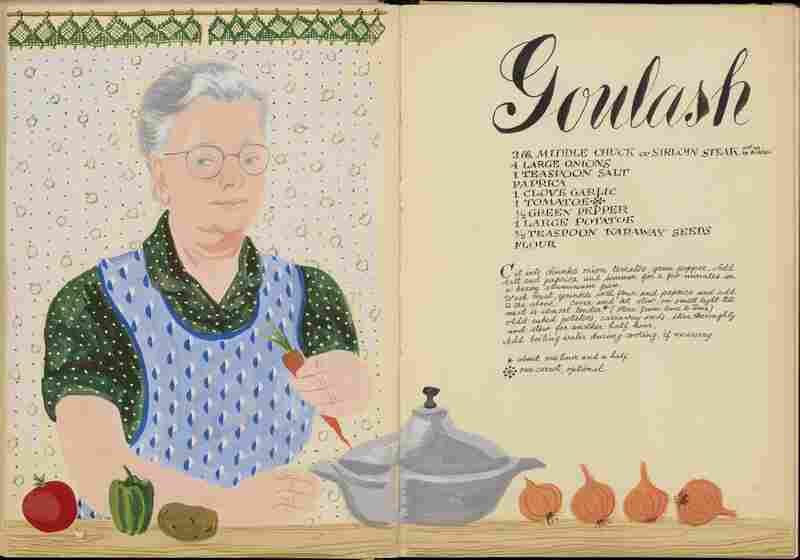 Cipe also loved illustrating food. Martha Scotford, author of Cipe Pineles' biography and professor emerita of graphic design at North Carolina State University, says Pineles did food illustrations for her own magazine and was hired to do them for other publications, too. Scotford adds that Pineles also loved entertaining guests: "She was just an enthusiastic hostess. She loved cooking."

The bulk of the new book, published on Oct. 17th, is Pineles' original art and recipes — vibrant illustrations of food with handwritten instructions playfully intertwining through the pages. The book is prefaced with several essays focusing on Pineles' life and work and how they intersected with food. Among others, they are written by Paula Scher, a graphic designer who knew Pineles, and Mimi Sheraton, a food critic who worked with the designer at Seventeen magazine. In preparation for the project, Rich and MacNaughton spent time interviewing Pineles' family and looking through her archive of personal and professional artifacts at the Rochester Institute of Technology. 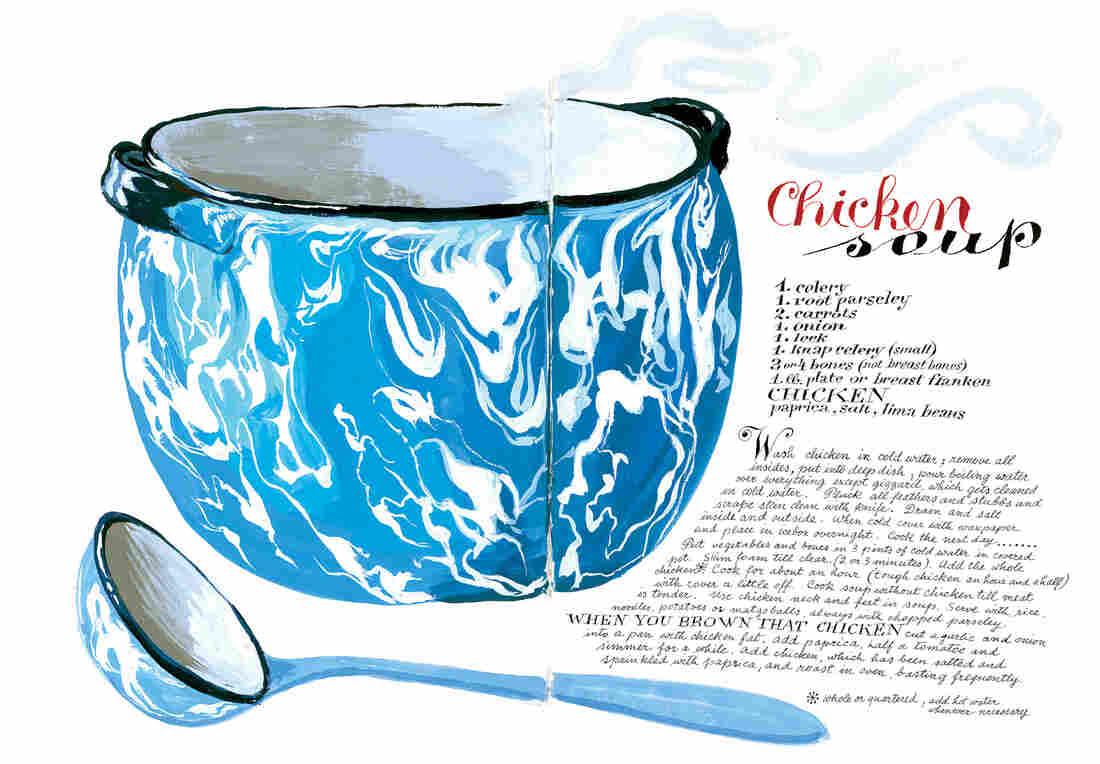 In the last section of the book, Rich updates some of the recipes for the modern cook. To do so, she says she made all of them. Among her favorites are chicken soup and fishkalacha — a dish with no fish, just meatballs cooked like fish. She calls it a "poached meatball" of sorts. 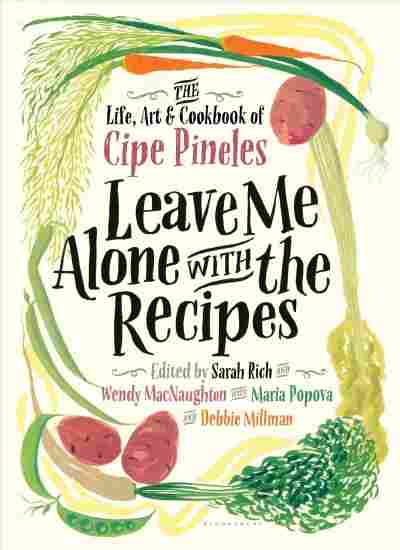 Leave Me Alone With the Recipes

The Life, Art, and Cookbook of Cipe Pineles

Rich says that this focus on Eastern European cuisine is familiar to her because of her own family history. But Pineles' illustrations cast the food in a different light, she says. "She had portrayed this food that often seems homely and old-fashioned in this incredibly vibrant, celebratory, colorful way. It was kind of exciting to see it that way."

MacNaughton says she's steeped in the world of food illustration, but that she hadn't heard of Pineles before finding her book. She thinks Pineles was well-respected during her lifetime, but since then hasn't gotten the credit she deserves, especially when compared to her male counterparts.

Scotford, Pineles' biographer, agrees. When Nine Pioneers of American Graphic Design was published in 1989, and included both of Pineles' husbands but not her, Scotford wrote what she calls a "protest" article in response. Published in quarterly graphic design journal Eye, "The tenth pioneer" chronicles Pineles' work and questions her absence from the book.

MacNaughton explains, "She was married to two very well-known and very well-respected male graphic designers. In the history books, those men have gotten a lot of credit, and in classes in design school they are studied. But Cipe Pineles, not so much."

MacNaughton hopes that the cookbook will in part help change this. "We're excited to bring this woman who ... has been overlooked ... in history back to the forefront where she belongs," she says.