Accessibility links
From Cattle To Capital: How Agriculture Bred Ancient Inequality : The Salt Archaeologists say early civilizations in North and Central America were more egalitarian than the societies of Eurasia — and they think it's because early Americans didn't have cattle or horses. 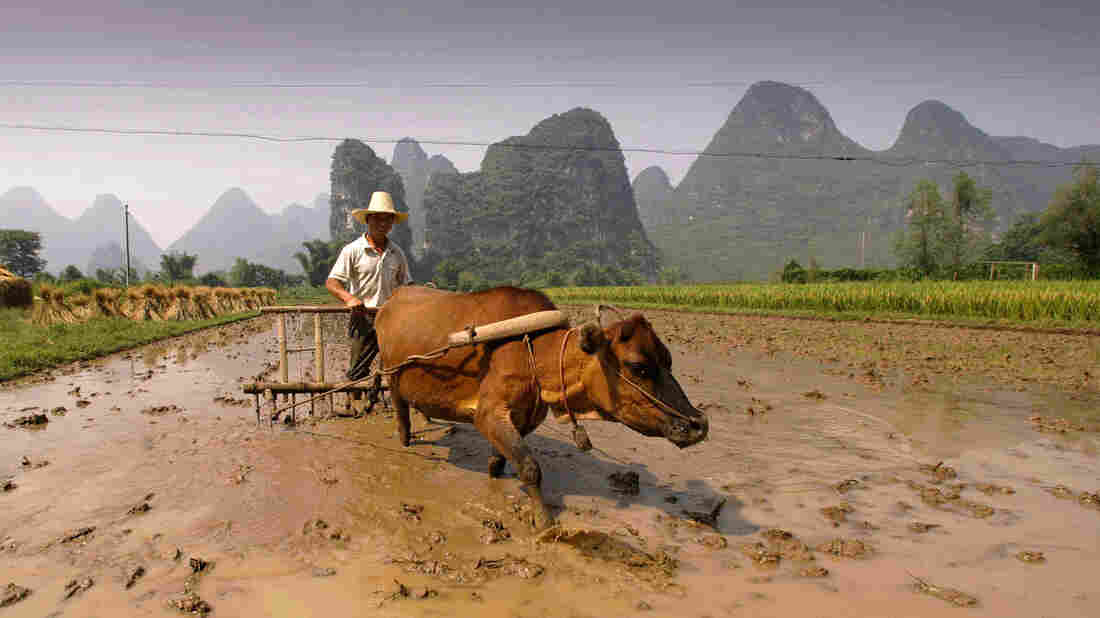 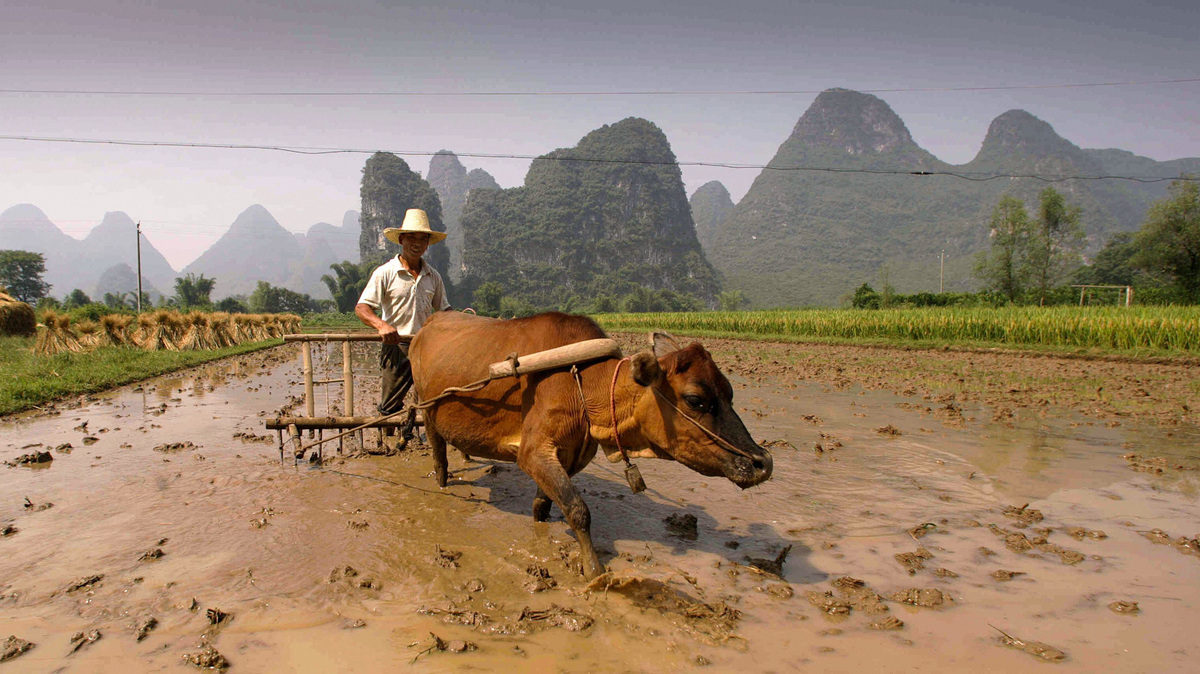 A farmer plows his field with an ox-pulled plow in China's Guangxi province. Archaeologists think that domesticated farm animals increased inequality in some ancient societies.

The gap between rich and poor is one of the great concerns of modern times. It's even driving archaeologists to look more closely at wealth disparities in ancient societies.

"That's what's so fun about it," says Timothy Kohler, at Washington State University. "It widens our perspective, and allows us to see that the way things are organized now is not the only way for things to be organized."

Measuring inequality in societies that didn't leave written records is hard, of course. But physical ruins remain, and Kohler figured that even long ago, the richer you were, the bigger the house you probably occupied.

So he and his colleagues collected measurements of homes from many different early human societies, including nomadic groups that depended on hunting, others that relied on small-scale growing of food, and early Roman cities. There were 63 sites in all, ranging in age from 9000 B.C. to 1500 A.D.

In a report that appears this week in the journal Nature, Kohler reports that increasing inequality arrived with agriculture. When people started growing more crops, settling down and building cities, the rich usually got much richer, compared to the poor.

That's what most anthropologists expected, but there were interesting exceptions to the rule. Inequality was not inevitable. The civilization of Teotihuacan, which flourished in present-day Mexico almost a thousand years ago, was based on large-scale agriculture, yet "had remarkably low wealth disparities," Kohler says.

Kohler's data also showed something completely unexpected. After the advent of agriculture, "for some reason, wealth gets much more unequally distributed in the Old World, Europe and Asia, than it does in the New World," Kohler says. "This was a total surprise."

Kohler isn't sure why this happened, but he has some ideas. "Think about it," he says. "You know that animals like cows, oxen, horses, sheep, goats, pigs, all are Old World domesticates." Through an accident of geography and evolution, they simply didn't exist in the Americas before Columbus arrived.

So it was only in the Old World that ancient farmers could use oxen to plow more fields, expand production, and get richer, compared to poorer farmers who could not afford those animals.

They were accumulating wealth, what economists call capital — a term that Kohler says is no accident. "Our word 'capital' comes from the same proto- Indo-European root as our word for 'cattle' does," he says.

There's debate about whether this ancient history is relevant to current debates. But archaeologist Michelle Elliott, who teaches at the Sorbonne-Pantheon university in Paris, says a lot of archaeologists believe it is. "They feel like, 'We have all these data about our species, that go back to its origins,' " she says, and it would be nice if those data could somehow help solve problems today.

Elliot, who wrote a commentary on Kohler's research for Nature, says that Kohler's research is based on a relatively small sample of sites, and she's hoping that archaeologists will analyze data from additional ancient civilizations, to see if they also fit that pattern that Kohler observed.

Note: This post was updated on November 16, at 8:45 am, to include additional information about Teotihuacan and Elliott's hopes for further research.