Accessibility links
Czech Republic Creates Tuber For Health-Conscious Purple-Potato Eaters : The Salt "Val Blue" is the first new variety bred at the Potato Research Institute since 2005. And though vibrant, unique types are popular elsewhere, they're still a hard sell in this potato-loving nation. 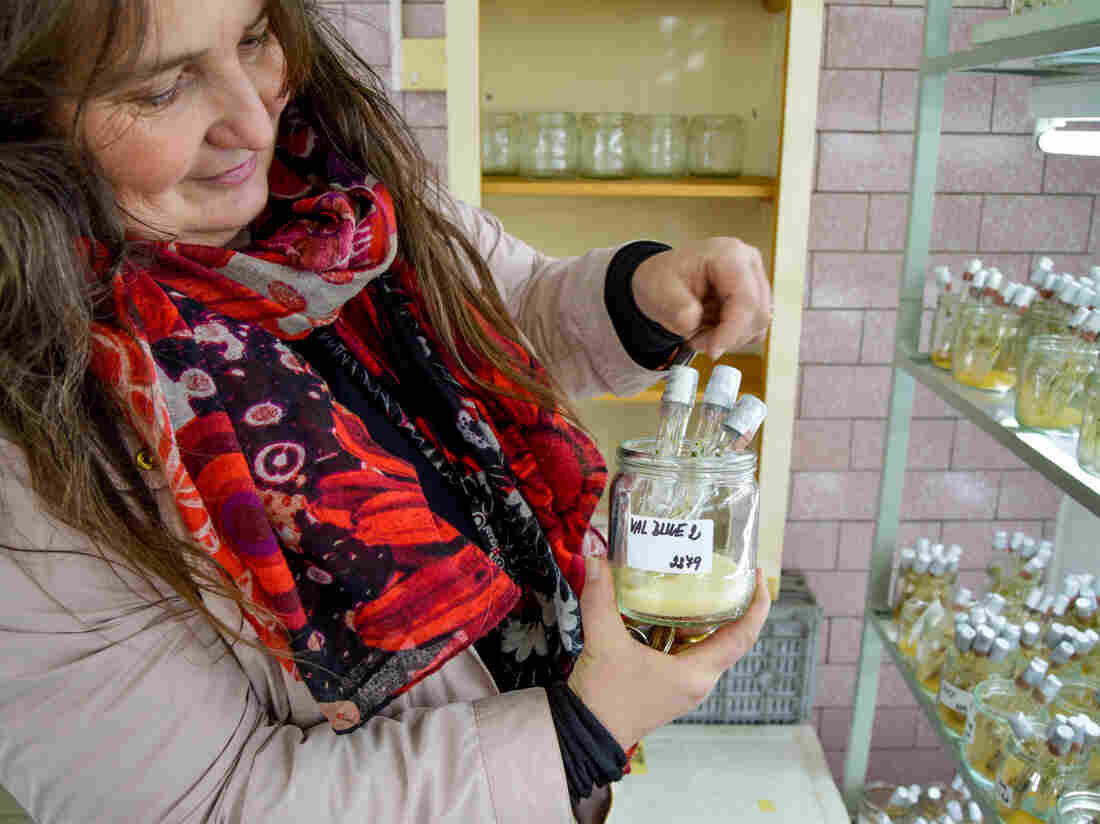 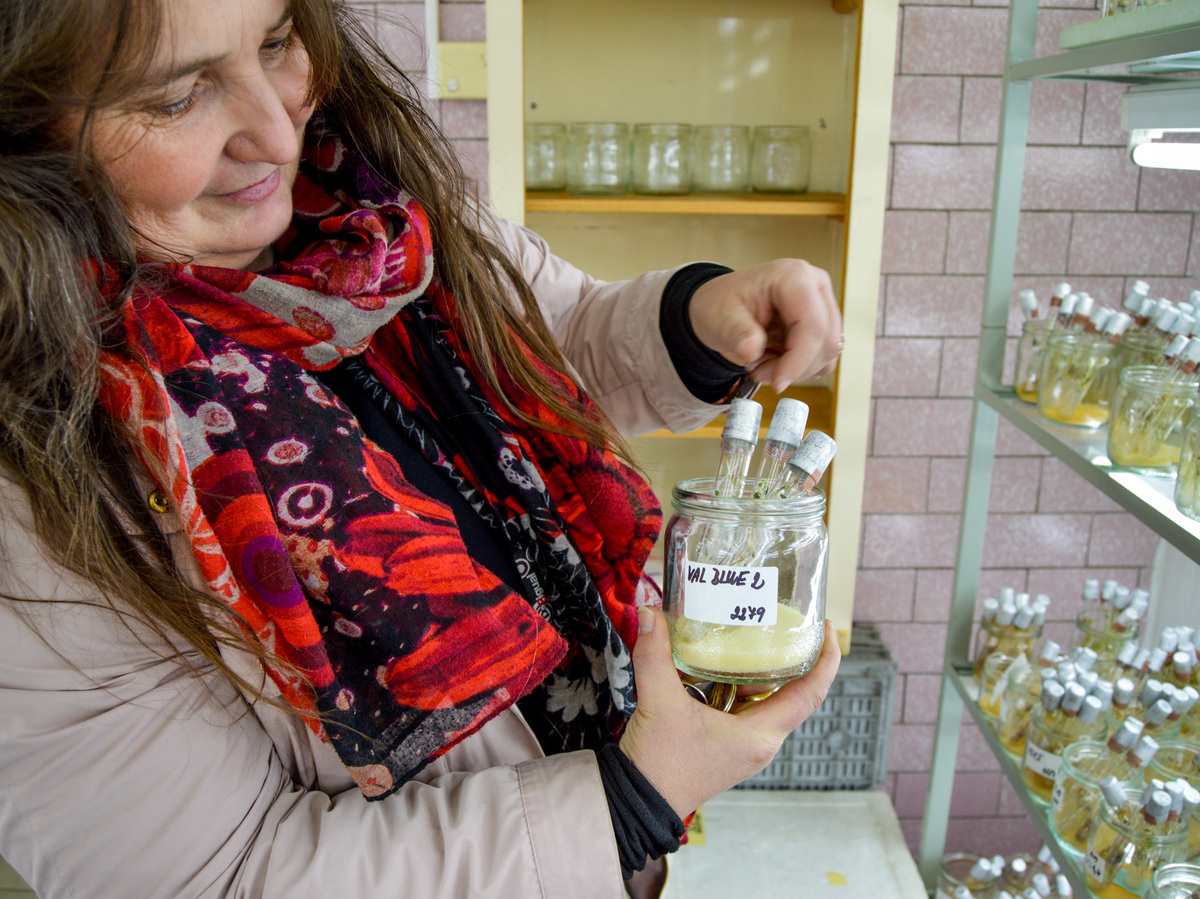 Potato Research Institute geneticist Jaroslava Domkářová says that while potatoes are a staple crop in the Czech Republic, the recent blue "specialty varieties" are harder to market.

In the east-Bohemian city of Havlíčkův Brod, two hours by train from Prague, the Potato Research Institute is caught in the crosshairs of time.

Not much appears to have changed in the PRI's "historical building" in the Institute's nearly 95 years of existence. (Given that the history of Havlíčkův Brod stretches back more than 700 years, "historical" is a relative term.) There's no front desk in the building, no lock on the door during working hours. At noon, the hallways are dark and quiet, and the smell of a hot lunch wafts out of a noisy canteen on the ground floor.

But between its walls, geneticists have been breeding an agricultural product that would have been unthinkable in 1920s Czechoslovakia. Even in today's Czech Republic, it's something of a tough sell.

In October, the PRI introduced the "Val Blue," a debut 11 years in the making and the first new variety of potato bred at the Institute since 2005. Like most potatoes, Val is fairly unprepossessing at first glance. But inside, its flesh is a rich, royal violet color, which cooks up to a purple shade straight out of a box of Crayolas. The texture is smooth and dense, the flavor earthy and fairly indistinctive.

Rather like a potato, PRI geneticist Jaroslava Domkářová notes with a smile.

According to Domkářová, the Val Blue's vivid purple color is 30 percent more intense than that of its "mother" potato, the PRI-bred "Valfi." Its trademark hue indicates an antioxidant load surpassing its white- and yellow-flesh relatives two or three times over.

Brightly colored, antioxidant-rich potatoes already grace the produce aisles of supermarkets and natural-food stores in America and elsewhere. As The Salt reported back in 2012, these Technicolor spuds are sometimes the work of geneticists tasked with rebranding the potato as a health food.

But here in the Czech Republic, the marketability of uncommon potato breeds is low, Domkářová says. "These recent blue varieties will be like a specialty item," she explains.

The humble potato — brambor — gets a lot of love in the Czech Republic, where it's a staple crop that can endure its long winters. Scan the side dishes on a menu in Prague, and you may notice a theme: Bramborák. Bramboráčka. Brambůrky. Bramborový salát.

Just as the anthropologist Franz Boas observed native Canadians constructing dozens of words from a single icy prefix, giving us the apocryphal notion that the Inuits have a hundred words for "snow," so, too, have Czechs built an extensive vocabulary around their tubers. 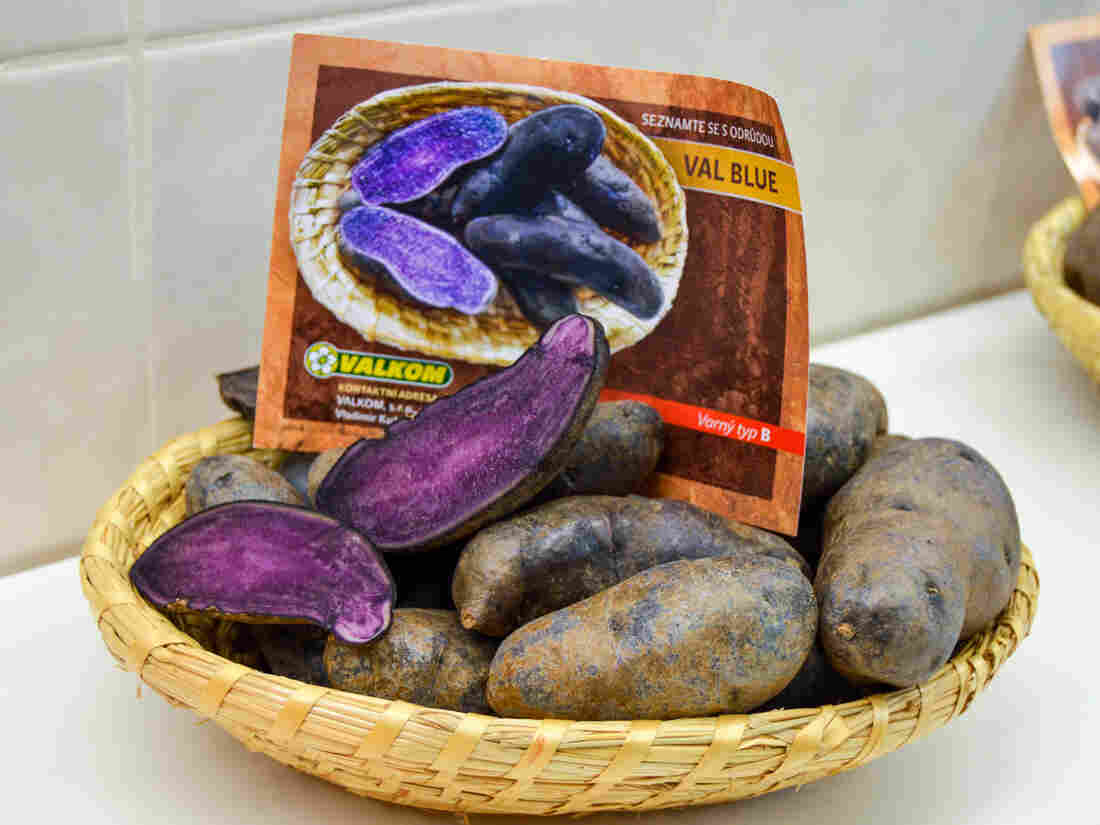 The flesh of the "Val Blue" is a rich, royal violet color, which cooks up to a purple shade straight out of a box of Crayolas. Morgan Childs for NPR hide caption 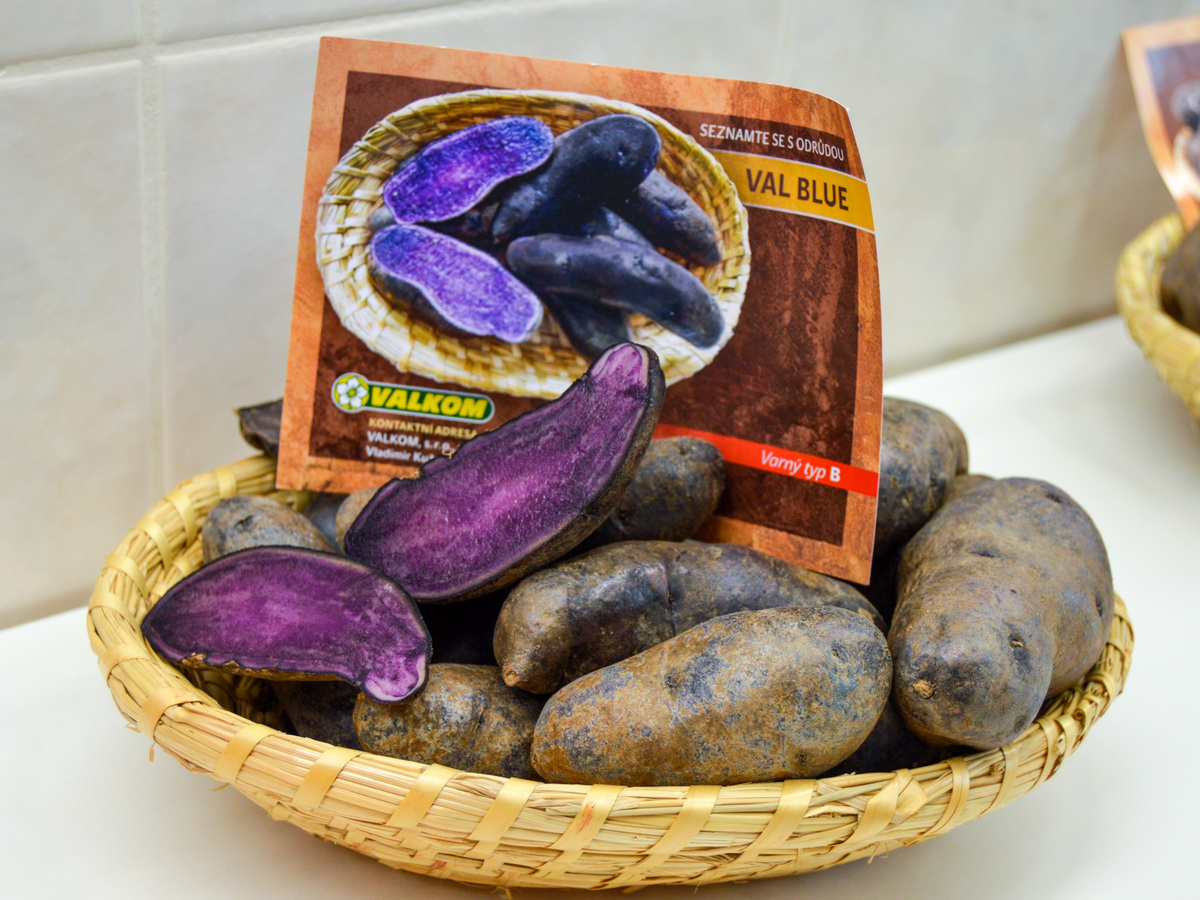 The flesh of the "Val Blue" is a rich, royal violet color, which cooks up to a purple shade straight out of a box of Crayolas.

Founded as a private institution in 1920 and assumed by the Czechoslovak state three years later, the PRI functioned primarily as a center for research and as an adviser to potato growers for the better part of the 20th century. After the fall of communism, the Institute underwent a process of modernization, including the adoption of unconventional breeding procedures, that continued into the first decade of the 21st century.

Today, the Institute's researchers focus on potato genetics and breeding, plant conservation and growing technologies. They also study a handful of other plants, like the Jerusalem artichoke.

In a refrigerated room filled with finger-sized test tubes of sprouts and seeds, the PRI's in-vitro potato gene bank houses the genetic material for some 1,300 different varieties of potato — including the Val Blue — plus hundreds of other hybrids. The vast majority of these breeds are kept in the bank for long-term research and conservation purposes and are not available for commercial use.

According to Domkářová, of the approximately 1,500 varieties of potato grown in the European Union, the Val Blue belongs to a rare cohort: "The ones with colored flesh — they're actually very limited," the geneticist says. "Maybe the reason for this is that big [growers] need to have big markets," she adds, noting that consumer interest is currently limited.

It's possible that the new potato will end up in supermarkets one day, Domkářová says, or that the PRI will sell the tubers themselves. "So far we haven't worked out the business strategy," she says.

And how will a growing interest in Western or international diets change Czech agriculture and the work of the PRI? Ježkovy zraky, Domkářová says. "Oh boy."

"Consumption of potatoes has, unfortunately, fallen into decline, because people have begun to eat more things that they don't have to prepare ... pasta, rice," Domkářová says. "So there was a little bit of a departure from potatoes to those foods." Fortunately, she notes, potatoes form the basis, but not the entirety, of the PRI's research.

Still, she doesn't believe eating a blue potato should take a leap of faith for Czech consumers.

"If someone had a big pile of blue potatoes on their plate, it wouldn't be easy on the eyes," she concedes. "But maybe if it was mixed as a salad, you know?"

Morgan Childs is a freelance journalist based in Prague. You can read more of her work here.