Accessibility links
Climate Change Ripens Prospects For German Winemakers : The Salt While Spanish and Italian growers worry heat will dry out vines, in Germany, warming has made for better Rieslings. And one scientist says they couldn't be making red wine so good otherwise. 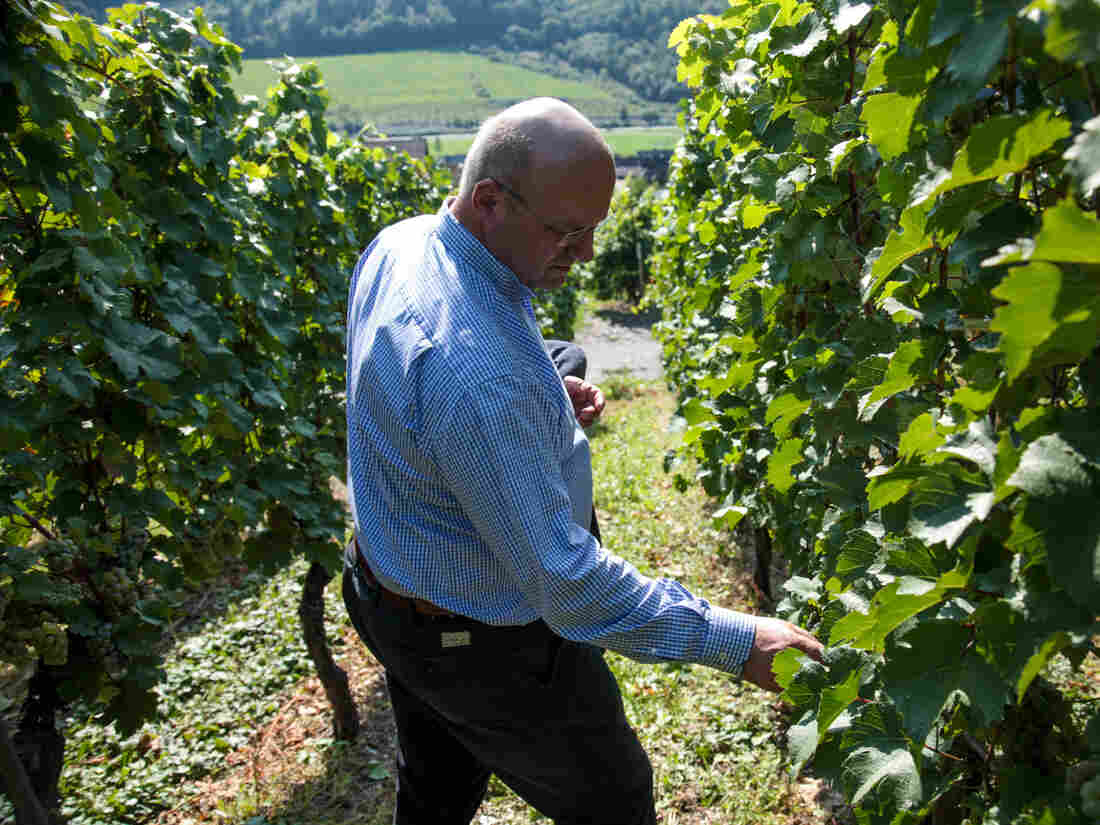 Johannes Selbach checks the green speckled Riesling grapes he grows along the Mosel River in Germany. This year Selbach said the harvest was a record month early, which he says is evidence of global warming. Daniella Cheslow for NPR hide caption 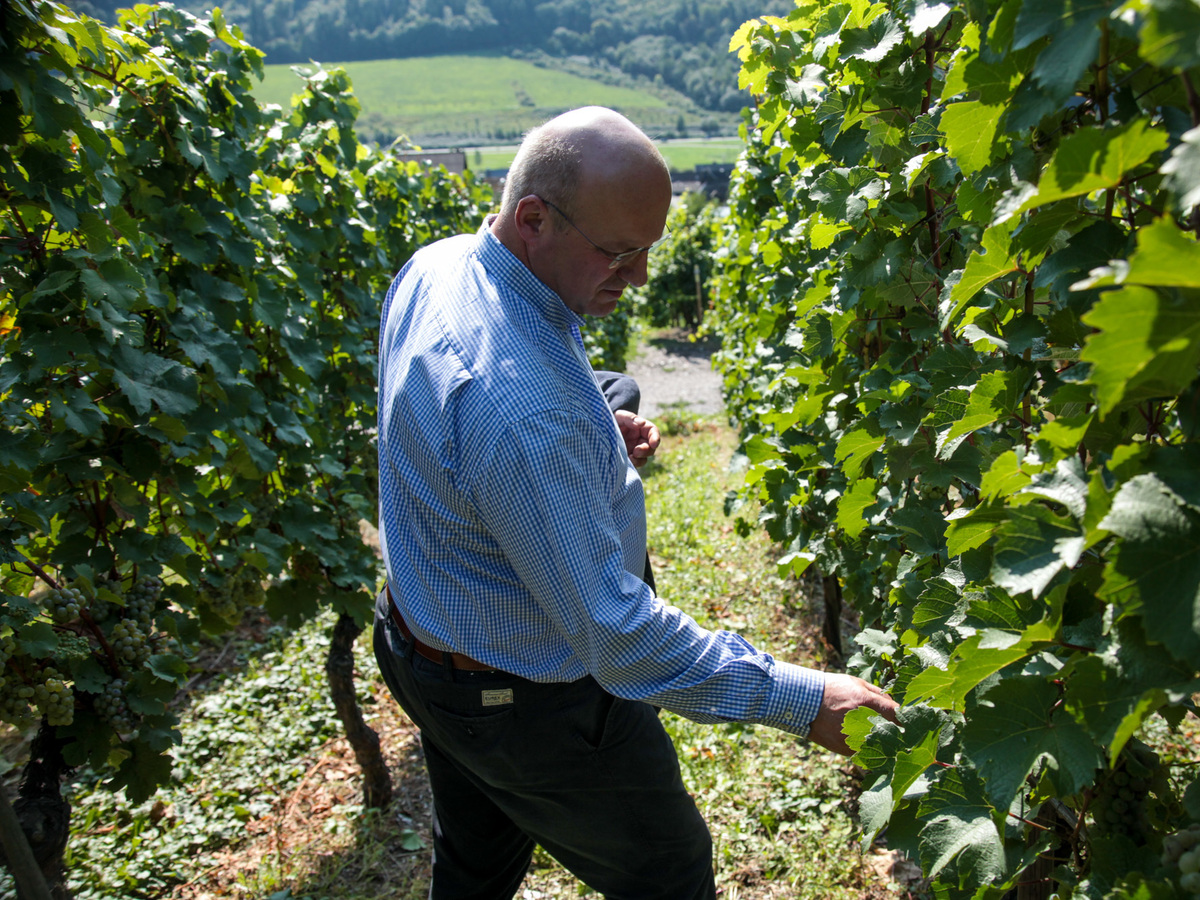 Johannes Selbach checks the green speckled Riesling grapes he grows along the Mosel River in Germany. This year Selbach said the harvest was a record month early, which he says is evidence of global warming.

Johannes Selbach's family has made wine in Germany's Mosel Valley for four centuries, and he spares little of the history on a tour of his vineyards. He has had three soil profiles extracted from the ground and mounted on the wall of his winery.

"The places where the sun melts the snow first have been known for thousands of years," he says. "The good spots are known for generations."

The Romans who planted this valley used single poles to train the vines, Selbach says, and vines still grow on posts on the steep sides of the winding Mosel River, with icons of the Stations of the Cross dotting the footpaths. Selbach takes care not to dirty his suit, which he wore to Sunday Mass, as he walks straight uphill between the vines. In early September, the speckled green Riesling grapes are tart and a little sweet – on the knife's edge of ripeness. And they are a month early. Selbach looks up at a large white cross on a hilltop. Grapes grown up there were once so unripe that they would need added sugar to make a balanced bottle.

"Twenty-five or 30 years ago, the top of hill was not regarded with affection," he says. "Today it's what is prized. Side valleys were not highly regarded, but now we love them."

Across Europe, hotter temperatures are reshaping the wine industry. In southern Spain and Italy, growers worry the heat will dry out their vines. A fledgling wine business is taking root in the United Kingdom. In Germany, warming has been a blessing, and it comes as Riesling enjoys a renaissance, especially among American drinkers.

One of Riesling's ambassadors is Ernst Loosen. When I meet him, his black puppy, Nyx, eagerly nuzzles his knee. He admits he's had little time to spend with her between trips promoting wine overseas. And he is emphatic that life today is easier with warmer temperatures. 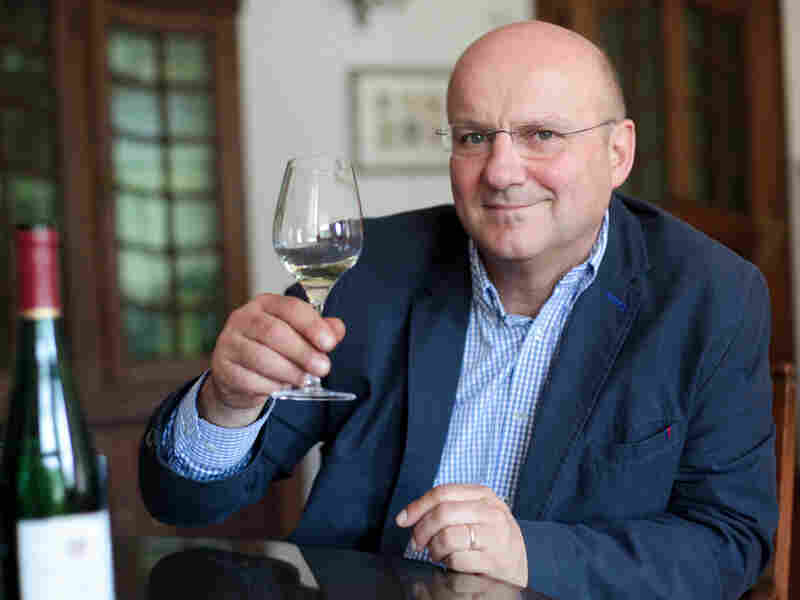 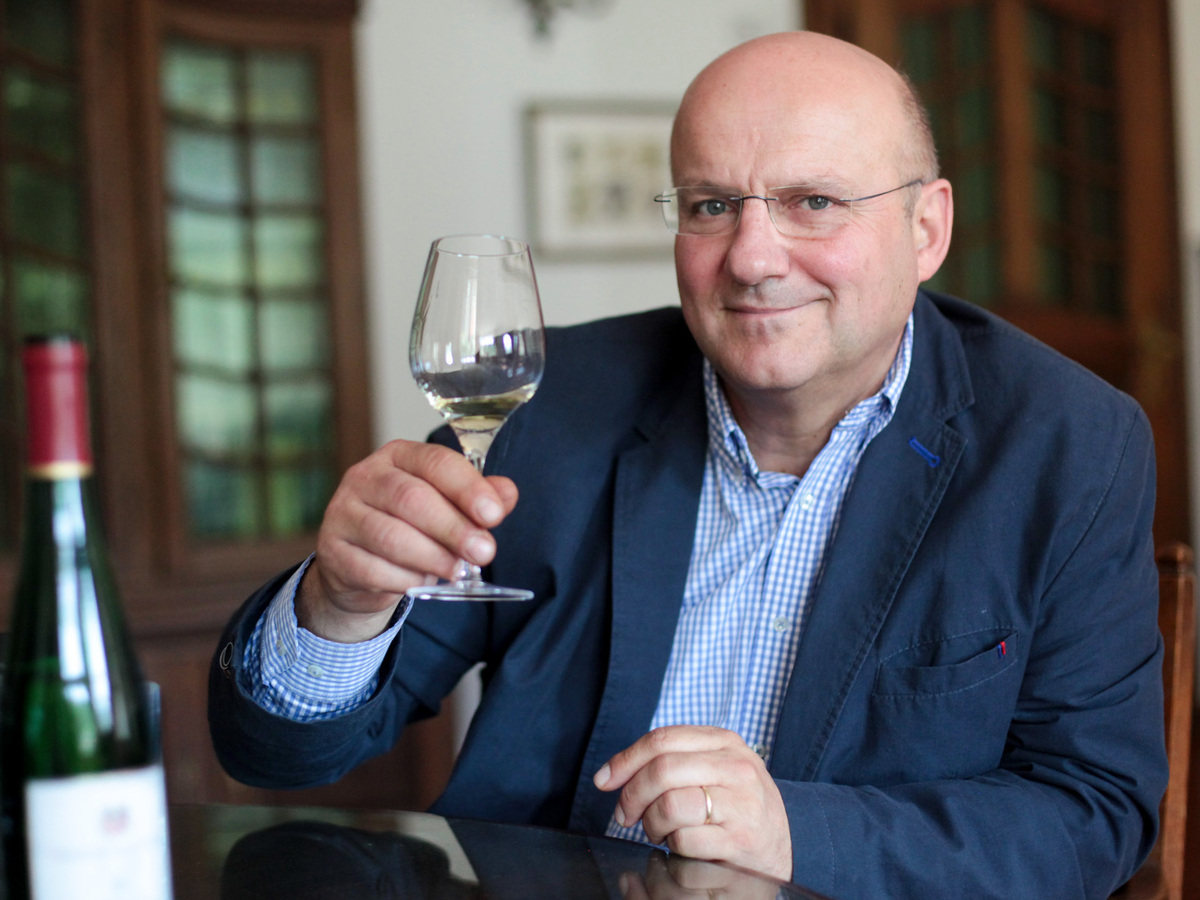 "I don't want to have the time back of my grandfather and my father," he says. "They had only three vintages in a decade getting ripe and had to deal with seven vintages in 10 years which were awful, undrinkable to very mediocre. In the old days it worked, the prices have been higher, and people waited longer. We wouldn't survive with this kind of weather anymore."

A century ago, despite its challenges, Riesling was prized as a regional wine, a white equivalent to a red from Bordeaux, says American wine importer Stephen Bitterolf. Then, winemakers grew grapes cheaply for export to the U.S. and the UK, and compensated for the high acidity of unripe Riesling grapes by adding sugar to the crushed fruit. Some winemakers added so much, and sold the bottles at such low prices, that Riesling developed a reputation as cheap, sweet plonk.

Bitterolf says the trend has been reversed in the last decade, as producers focus on terroir and add little or no extra sugar. The warmer temperatures make that task easier. And Americans have grown to appreciate it: The German Wine Institute, an industry agency, says Americans imported about 1.5 million cases of Riesling in 2016, part of a steady increase over the last 15 years. To celebrate the improving wine, six years ago Bitterolf launched Rieslingfeier, an annual festival for the wine held in New York City.

"Finally, after decades and decades, people are beginning to order Rieslings, understand Rieslings, and at least have a semi-positive reaction," he says. Before, he adds, "'No I don't like Rieslings, they're sweet,' was always the line." 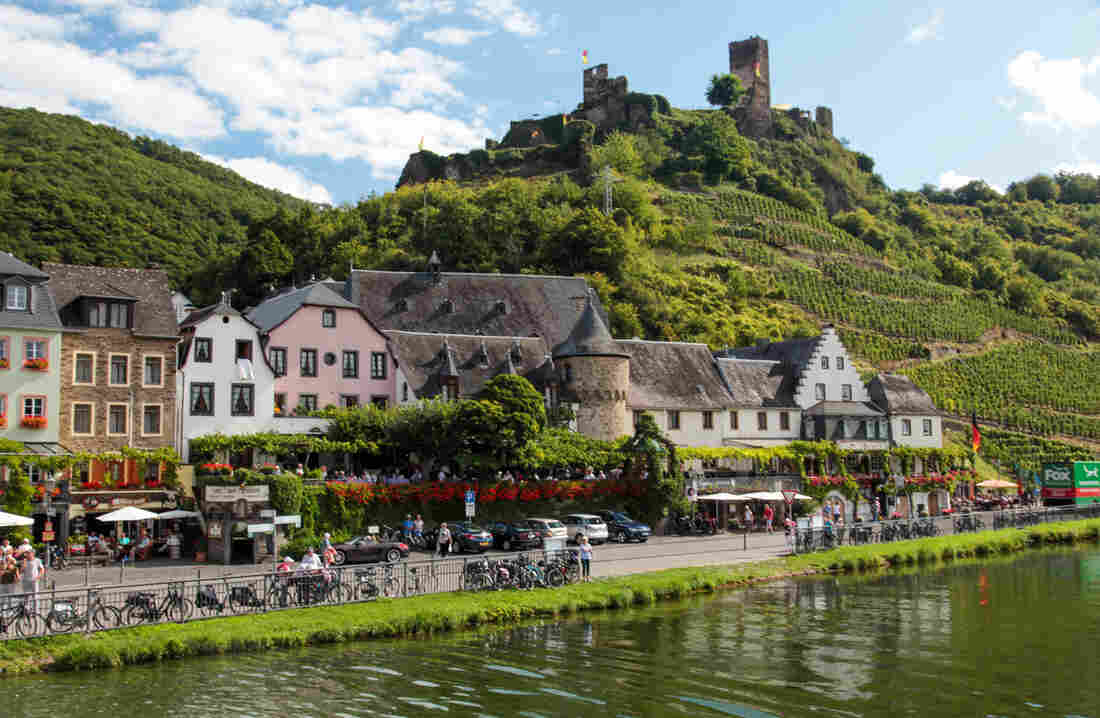 Grapes have been growing along the steep slopes of Germany's Mosel River for centuries. Now global warming is shifting the timing of the harvest. Daniella Cheslow for NPR hide caption 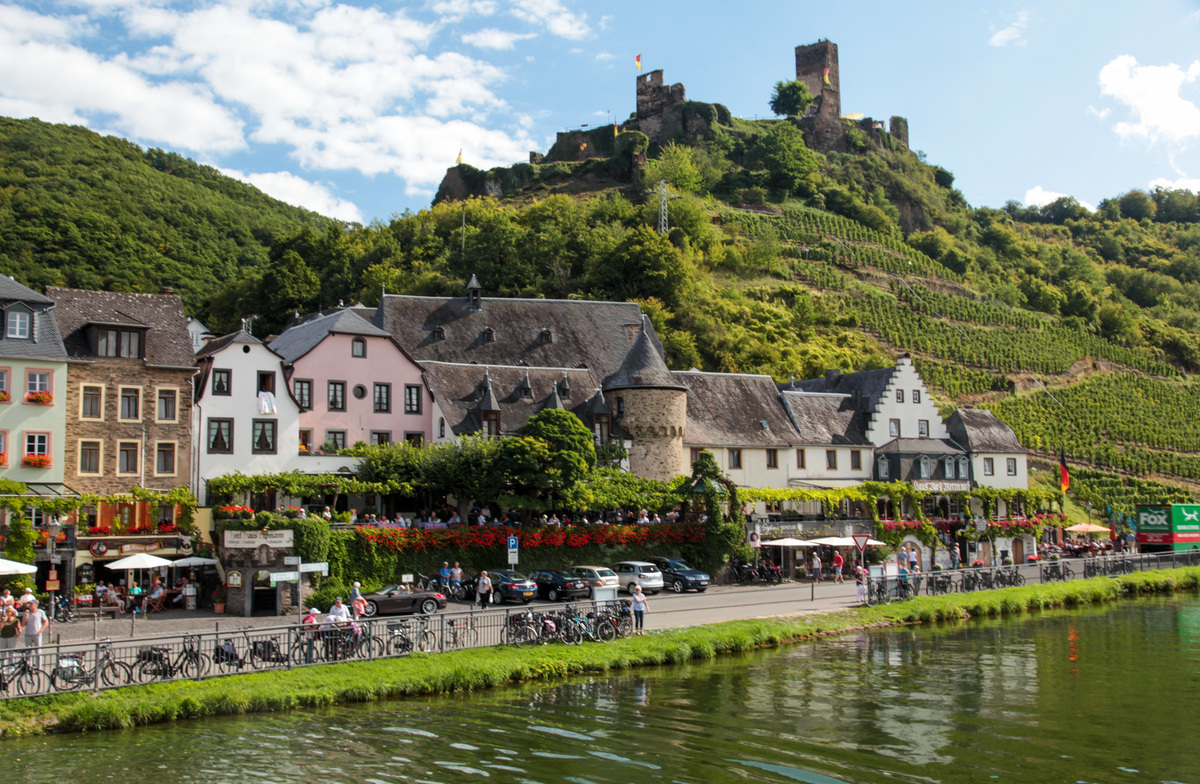 Grapes have been growing along the steep slopes of Germany's Mosel River for centuries. Now global warming is shifting the timing of the harvest.

Although the warmer days have been helpful for Riesling, the added natural sweetness in the grapes can add complications. Selbach says he makes "filigree" wine that is sleek and subtle.

"Everyone can make baseball bat wine," he says. "Preserving acidity is the challenge, not making big fat wines."

Selbach says changing temperatures may mean the end of his ice wine, made by pressing grapes when they are frozen solid. It is a gamble, because winemakers leave grapes on the vine well past the usual harvest in fall. Shorter winters mean the grapes may freeze too late, or not at all.

"After losing my shirt three years in a row, ice wine is a goner," he says.

As temperatures shift, so do the grape choices. Viticulturalist Ulrich Fischer at the Neustadt Wine Campus says this year, a third of all German vines are planted with red grapes – once rare in Germany. "We could not achieve a pleasurable and nice decent red wine without climate change," he says.

The volatile climate can be stressful. In 2010 Daniel Assmuth opened an organic winery in Bad Duerkheim, one of a class of new winemakers to try their hand in Germany's bubbling industry. Heavy rains and warm nights led to mold that devastated his crop last year. So he switched to conventional growing.

Ernst Loosen is sanguine about the future of Riesling. He has a joint venture with Chateau St. Michelle winery in Washington State, and he says the land there gets nearly three times as much sunshine as the Mosel Valley – and the Riesling survives. In Washington State, he says, he plants the grapes higher, adds shading and runs overhead sprinklers over the vines to cool down the environment. The easiest technique of all, he says, is to plant more fruit on the same patch of land.

"You immediately get the ripeness down," he says. "There are so many viticultural tools to fight this global warming thing."

A previous photo caption included this quote, incorrectly attributed to Johannes Selbach: "I don't want to have the time back of my grandfather and my father. They had only three vintages in a decade getting ripe." It was actually spoken by Ernst Loosen.