Accessibility links
Even After 100 Years, People Are Still Reaching For The Moon(Pie) : The Salt Though the marshmallow-chocolate-graham cracker treat began a century ago as a coal-miner's snack, it is still made by the same Chattanooga bakery and has since become a cultural icon of the South. 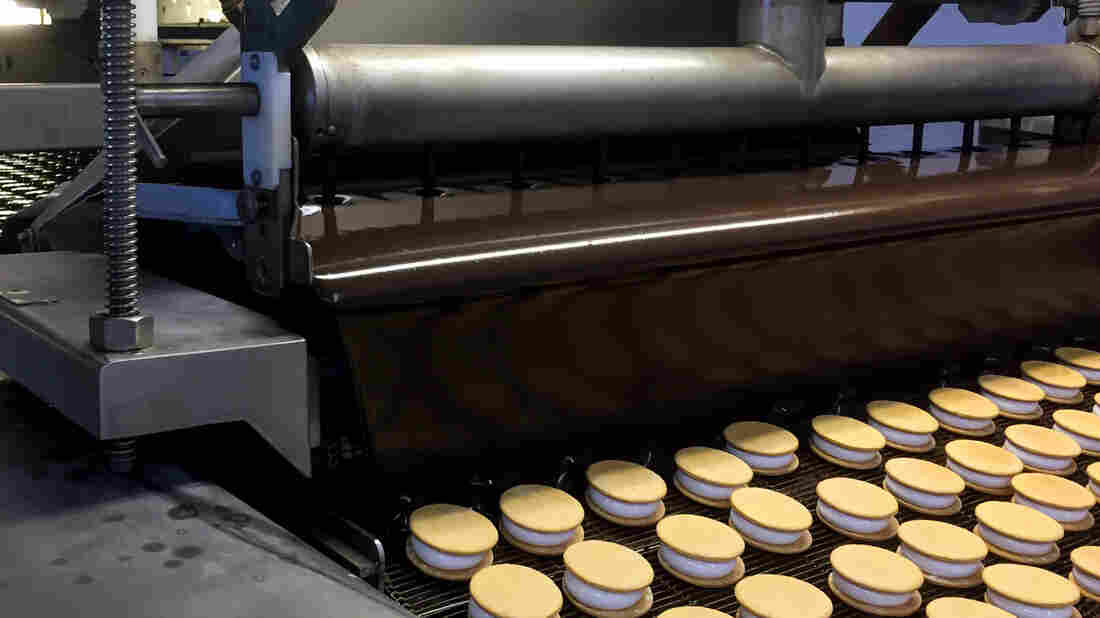 A machine coined "The Enrober" provides the "Willy Wonka moment" of MoonPie-making, when the treats are propelled under a gooey chocolate waterfall. Melanie Peeples for NPR hide caption 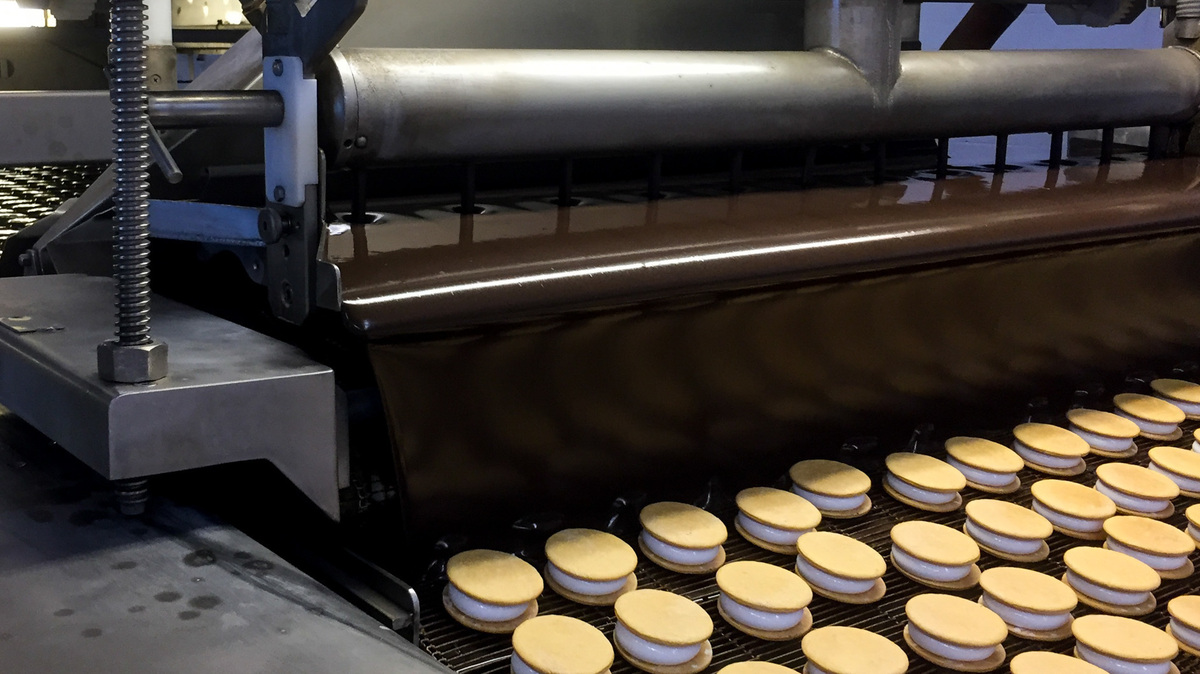 A machine coined "The Enrober" provides the "Willy Wonka moment" of MoonPie-making, when the treats are propelled under a gooey chocolate waterfall.

By now, the turkey, dressing and pumpkin pie are all packed into in your overworked stomach. But if your elastic waistband still has any give at all, it's time to honor to another special day in American food culture: the MoonPie's 100th birthday.

Once upon a time, the MoonPie was an unassuming little snack cake bought at the country store. The coal-miner's treat was just a humble sandwich of graham crackers with marshmallow filling, covered with a waxy coating of chocolate.

But today, a century after the first one rolled out of the bakery, the MoonPie has slipped the surly bonds of the snack food industry and transcended into a cultural icon of the South.

Country music singer Big Bill Lister sang about it back in 1951, (Gimme an RC Cola and MoonPie, and play "Maple on the Hill.") As NPR reported in 2003, no one knows exactly why the soft drink and chocolate snack became famous together. The most popular theory: During the Depression, they were both cheap (a nickel a piece), and they came in bigger servings than their competitors. For a dime, a MoonPie and an RC Cola quickly became known as the workingman's lunch.

But Lister is far from the only one to memorialize the MoonPie in art. Andy Warhol had his soup cans, but when folk artist Howard Finster turned his eyes to the MoonPie, he created art out of love, an homage to the birthplace of the little round-faced pie.

The Chattanooga Bakery in Tennessee has been owned by the Campbell family for five generations. More than a million MoonPies can be made per day here. 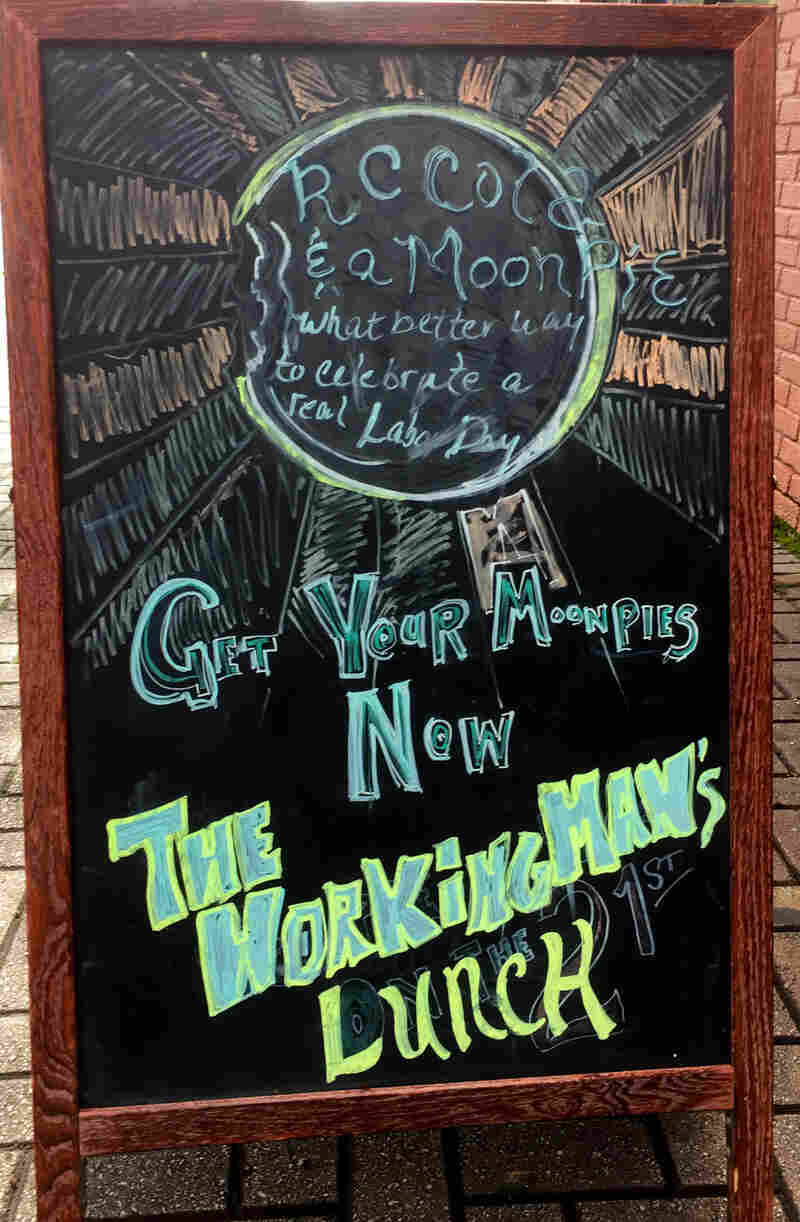 A sign advertises "The Workingman's Lunch" — an RC Cola and a MoonPie. The combo cost a dime during the Great Depression, and came in bigger servings than their same-priced competitors. Melanie Peeples for NPR hide caption

Marketing director Tory Johnston is standing next to the conveyor belt. "Here we have what's called 'The Enrober.'" Johnston says. "This is sort of our Willy Wonka moment — where the entire row of Mini MoonPies are proceeding underneath this waterfall of chocolate."

Like any great legend, the MoonPie mythos has been handed down in the great oral tradition.

Sam Campbell IV, president of the Chattanooga Bakery, tells the story as it was told to him. In this version, an enterprising salesman at the bakery is responsible for the birth of the MoonPie.

Says Campbell: "When he went up into Appalachia to try to sell some of the products from the bakery to the coal miners, they said, 'We don't want anything that you're selling. We want something that's big and round and filled up with marshmallow and it needs to be covered in chocolate.' And then they framed the moon with their hands and said, 'It needs to be as big as the moon!'"

Sure enough, the MoonPie was an astronomical hit. And though it is most beloved — and consumed — by those living in the South, MoonPies are actually sold in every state. You just have to look a little harder in some places than others.

But across the Tennessee River, at the MoonPie Store in downtown Chattanooga, it's obviously the main attraction.

"You can get a double decker, you can get a single decker, they have the mini ones ... and then they have all the different flavors," says Carrie Crowe, a Chattannooga native. "I, personally, like the vanilla or the chocolate."

Crowe even put MoonPies in her own, personal wedding gift baskets to guests — but today she's brought friends. One of them, Karen Hills, from Minneapolis, has never even seen a MoonPie for sale before.

Crowe tries to prepare her: "It tastes like a s'more, but not hot. And more mushy. It's the gushy delightfulness of the South."

Hills decides to go traditional and tries the chocolate. "Mmmm. It's like a soft vanilla wafer. A little s'more. The white part is marshmallowy," she raves.

Hills gathers several boxes to buy and take back to Minnesota, saying that she plans to share most of them. Having seen the light, she must now spread the good word.

"I'm having a group of women at my house next Monday. And they're going to have MoonPies," she announces.

Like Marco Polo, bringing noodles to Italy, Hills will bring MoonPies to the Minnesotans. In her bridge club, maybe they'll even sing "Happy birthday."