Accessibility links
In Minnesota, An Ambassador For Hmong Culture And Culinary Traditions : The Salt After his family fled Laos for America, Yia Vang was at first embarrassed by his family's home cooking. Then he learned to embrace it, and found that many others were willing to do the same. 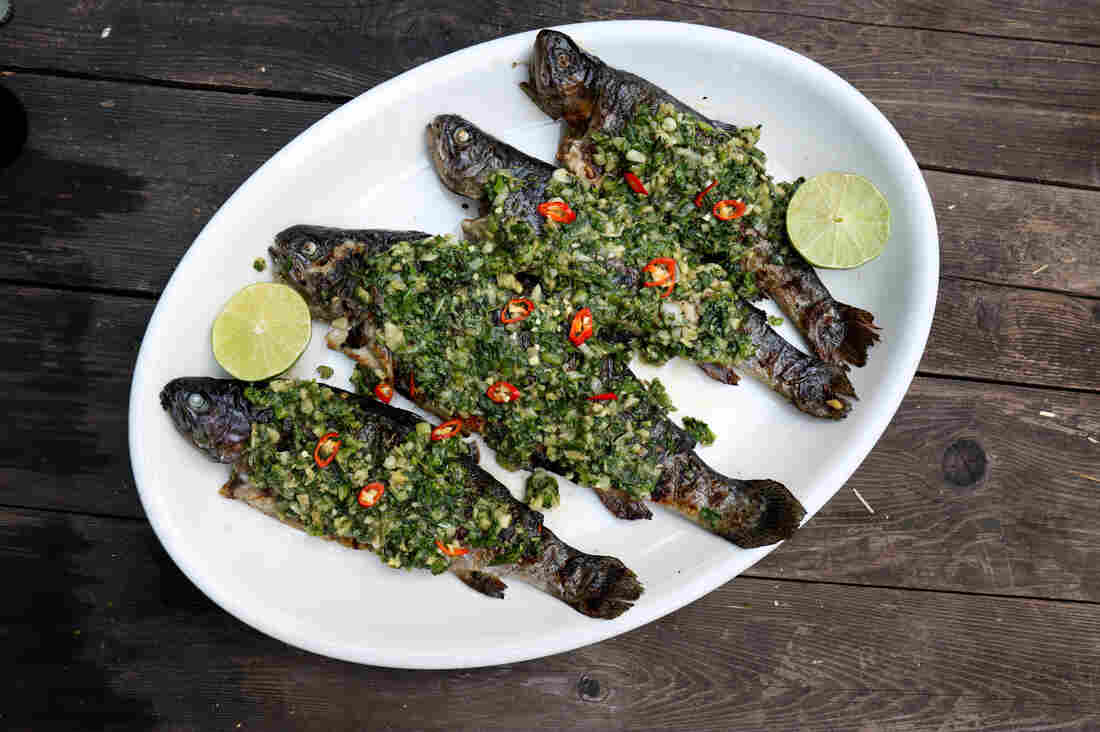 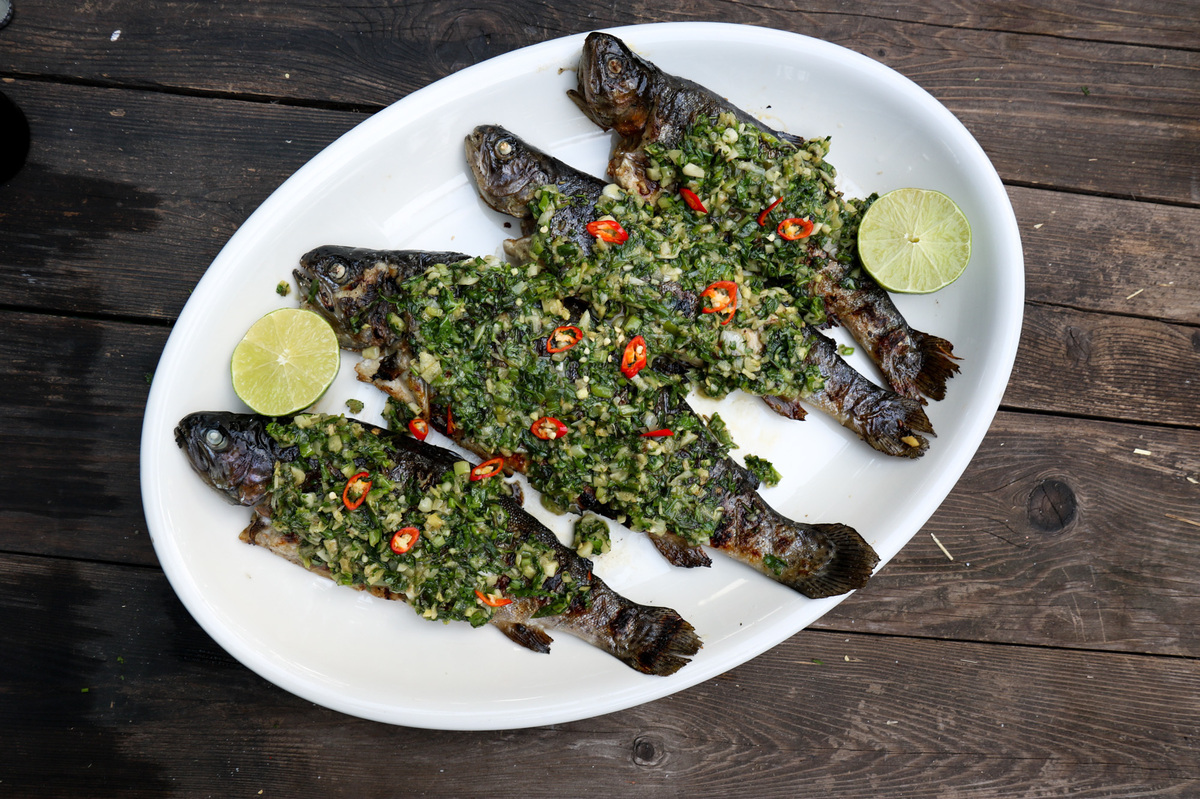 Yia Vang grew up in a family of storytellers.

When he was a child, his father used to regale him and his six siblings with war stories from his native Laos. His mother would read verses from the Bible and oblige her kids to recount them from memory.

Vang, now 33, says food is his story-telling medium. As the co-founder of Union Kitchen, a Minnesota-based Hmong pop-up restaurant, Vang says he wants to make the food he grew up with more accessible to non-Hmongs, while also passing traditions down to the next generation of Hmong Americans.

"Our history is intrinsically woven into the food we eat," he says. "Every dish has a narrative, and if you follow that narrative closely enough, you understand the people."

Vang and his family are among the more than 100,000 Hmong refugees who came to the Upper Midwest from Southeast Asia beginning in the mid-1970s. Vang's father, like many ethnic Hmong, fought in Laos's decades-long civil war. Facing persecution in the war's aftermath, the Vangs fled, first to a refugee camp in Thailand, where Yia was born, and eventually to the small town of Port Edwards, Wis.

Vang says that food played a central role in his home — his mother grew vegetables and his father cooked meat over a fire pit in the backyard — but that he and his siblings were embarrassed by the family's home cooking. "The other kids would make fun of our school lunches, saying they smelled funny," Vang says. They begged their mother to make American food, like spaghetti and meatballs, and Vang watched Western-style cooking shows like Jacques Pépin's The Complete Pépin.

It wasn't until he went away to college, at the University of Wisconsin-La Crosse, that Vang gained an appreciation for the cooking of his youth. He worked in local restaurants and started preparing Hmong dishes for friends. In 2010, he moved to the Twin Cities, where he was a line cook at high-end restaurants like Spoon and Stable.

After a few years, he found himself longing to create something more accessible to working-class locals. "I thought, man, I want to work at a place where my family can go," he says.

In early 2016, Vang and his cousin, Chris Her, a St. Paul native who was working as an accountant at the time, hosted what they thought might be a one-time pop-up meal at Cook St. Paul, a local restaurant. They advertised the fare as home-style Hmong cooking, and served dishes like like Hilltribe Grilled Chicken, which they smothered in chili, cilantro and scallions. 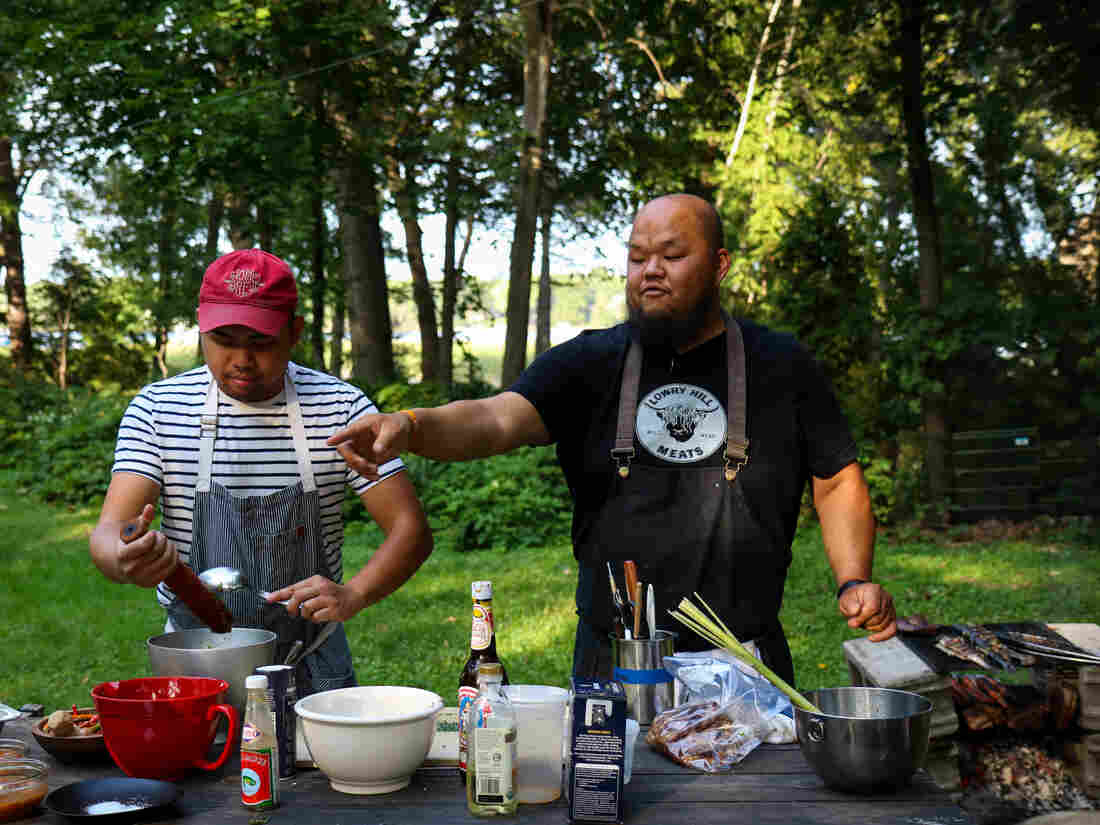 Chris Her (left) and Yia Vang prepare Hmong style food. "Every dish has a narrative," Vang says, "and if you follow that narrative closely enough, you understand the people." Courtesy of Mary Jo Hoffman hide caption 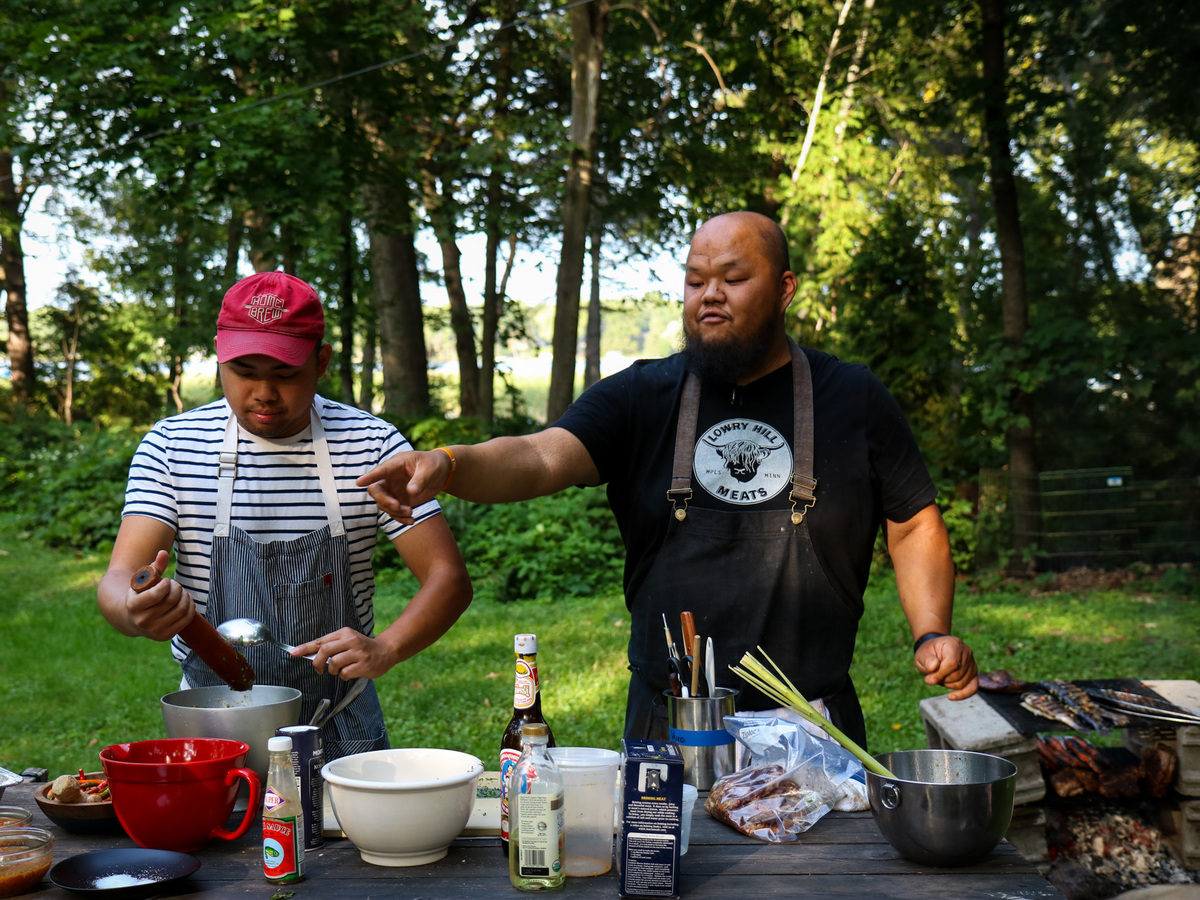 Chris Her (left) and Yia Vang prepare Hmong style food. "Every dish has a narrative," Vang says, "and if you follow that narrative closely enough, you understand the people."

"We did 220 covers that day," Vang says. "And people started asking when the next one would be." Vang and Her say that since that time, they have averaged about one pop-up a month (Her has since left his accounting job to concentrate on Union Kitchen full time); they also cater private events and host cooking classes around the Twin Cities.

"There are so many Minnesotans who, regardless of the size of the [Hmong] population, are unaware of what Hmong culture and food is," says Eddie Wu, the owner of Cook St. Paul. "[Vang] is the Hmong culinary ambassador — he does a really good job of maintaining his culture and identity in a way that's approachable."

Union Kitchen's pop-ups typically feature an a la carte menu of five or six main courses. Vang likes to relate each plate's origin to people. For example, of the mother-in-law soup — an herby broth with tender chicken that falls of the bone — he says: "After a woman gives birth she's supposed to eat this dish three times a day for a month. They believe the herbs have medicinal value to help with the trauma. But we eat it all the time."

Though many Hmong immigrants have opened restaurants across the Midwest, they often serve what Vang says are more "marketable" cuisines, like Chinese, Laotian or Vietnamese. "There's a sense of shame among a lot of Hmong people," Vang says. "We never had a country of our own — we were these wandering nomads."

Vang says it is precisely that nomadic history that makes Hmong food so special. "Hmong people take a little piece from culture from wherever they've been to keep progressing," he says. "Any culture that's nomadic — you have to figure out a way to keep building." He says that like many Asian cuisines, Hmong food is based on four pillars — protein, rice, broth and spice — and is flavored with lemongrass, chili, garlic, vinegar and limes.

"In the most basic sense, real traditional Hmong food is some kind of boiled vegetable, like mustard green, with meat, usually pork, and rice," says Pajau Vangay, a Ph.D. candidate at the University of Minnesota who studies intestinal health in local Hmong communities. "It's really simple but super good comfort food."

Vangay, who partnered with Vang earlier this year to teach a series of cooking and nutrition workshops, says Hmong cooking is predicated on adaptability. "We don't necessarily have an established cuisine. It's a dynamic and versatile cuisine that's always changing."

In keeping with that tradition, Vang says he likes to improvise. One of his specialties is the Hmong Hotdish, a riff on the traditional Minnesota casserole that often features green beans, cream of mushroom soup and tater tots. Vang's version uses local root vegetables, red coconut curry and seasoned pork sausage. 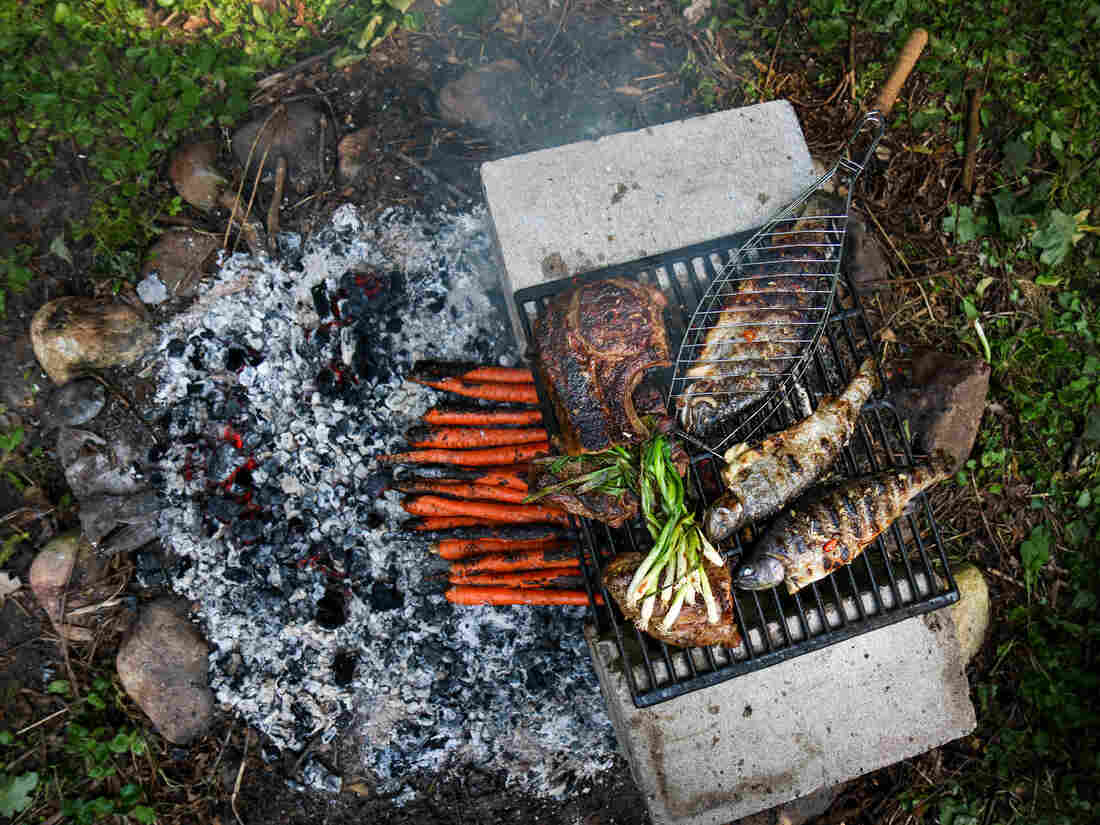 Rainbow trout on a grill. Yia Vang says that food played a central role in his home — his mother grew vegetables and his father cooked meat over a fire pit in the backyard. Courtesy of Mary Jo Horrman hide caption 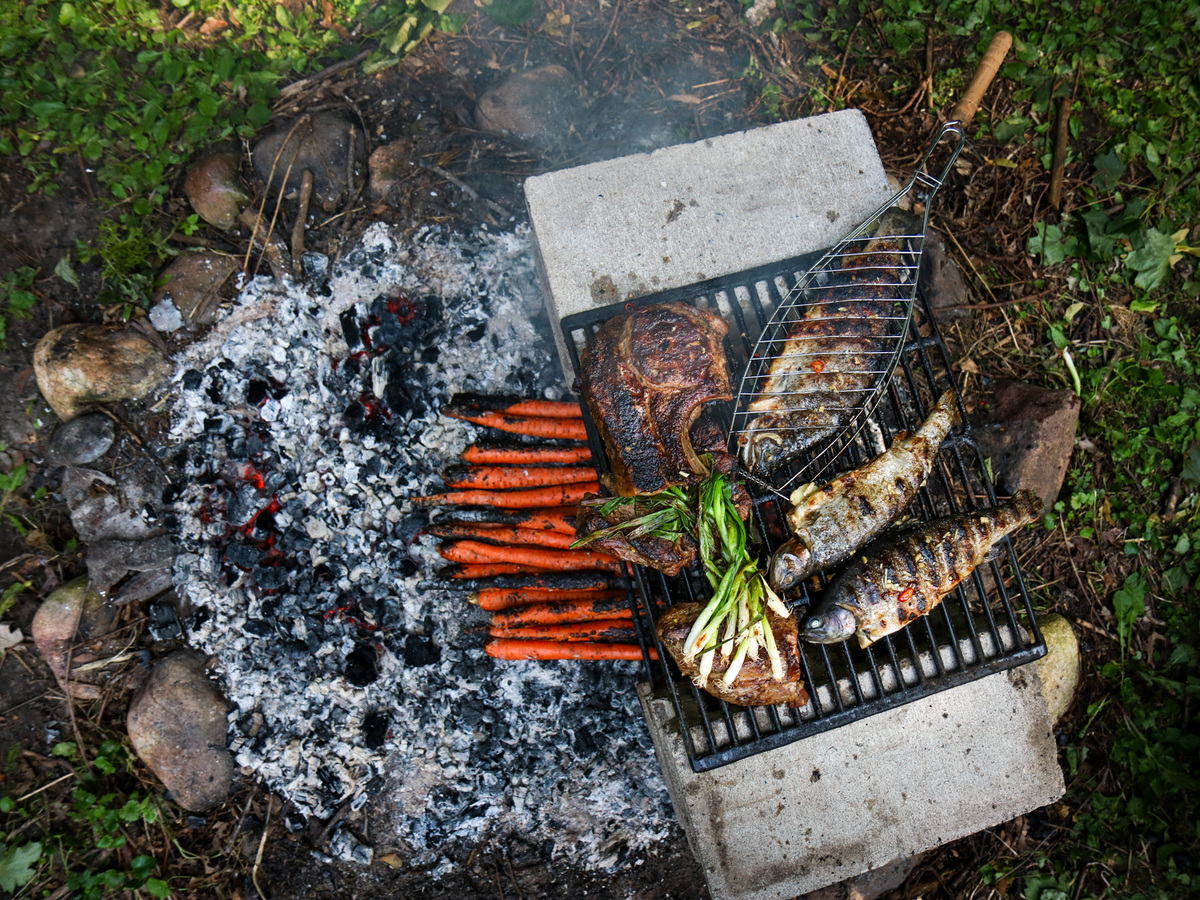 Rainbow trout on a grill. Yia Vang says that food played a central role in his home — his mother grew vegetables and his father cooked meat over a fire pit in the backyard.

Vang says he gets some pushback from elders in the Hmong community who question his authenticity. He shrugs it off. "We're not in Laos anymore, we're in the Midwest. I'm just part of the progression."

Minnesota's foreign-born population has tripled since 1990, according to census figures, and much of that growth has been concentrated in the Twin Cities, which has large populations of Latin American, Southeast Asian and East African immigrants.

The region's growing diversity has improved the food scene, Wu says. "More and more, the food people are talking about is from immigrants. The Scandinavian Minnesotans are out there and open to eating new things."

Vang sees opportunity in that. In the past year, he has brought Union Kitchen on the road, traveling to other cities in the Midwest with sizable Hmong populations. And Vang and Her and are looking to open a brick-and-mortar restaurant in St. Paul.

"The Twin Cities food community has really embraced us. We've come at a perfect time — people are more open to young immigrants who are looking to preserve our culture," Vang says.