Accessibility links
France's Butter Shortage Whips Up Fear And Humor In The Gastronomic Nation : The Salt Annual consumption of butter in France averages 18 pounds per person. But now the French are facing a butter crisis, which could affect almost every part of the national cuisine. 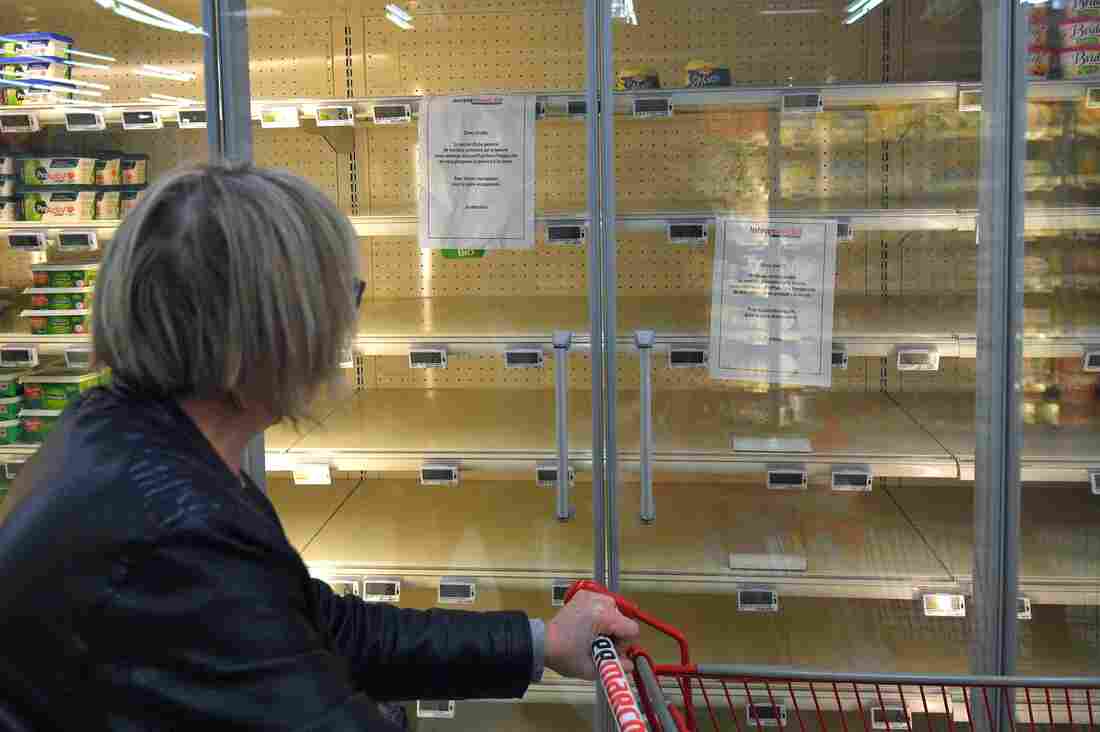 A woman reads a sign that says, "Due to a shortage of the raw material to make butter, we are not able to supply and sell you this product," attached to an empty refrigerated supermarket shelf in western France. Loic Venance/AFP/Getty Images hide caption 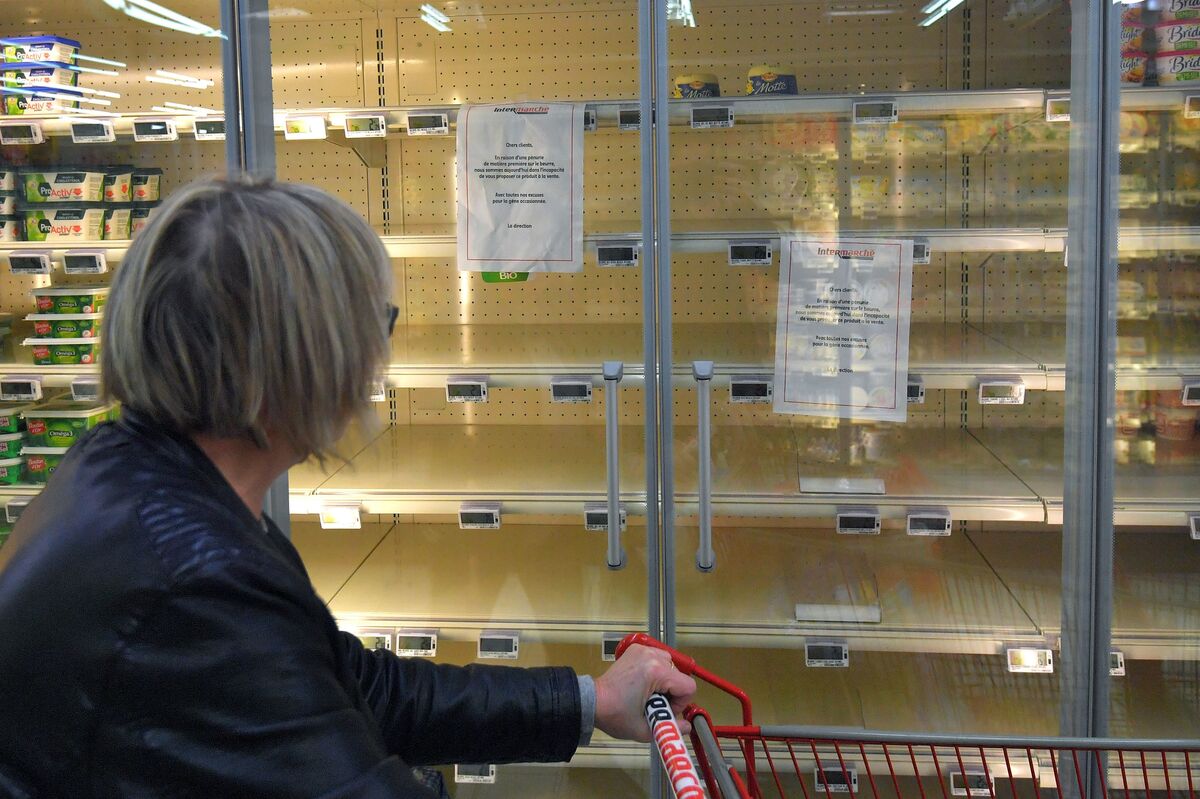 A woman reads a sign that says, "Due to a shortage of the raw material to make butter, we are not able to supply and sell you this product," attached to an empty refrigerated supermarket shelf in western France.

In the early morning hours inside a cozy Paris boulangerie, big batter-mixing machines are kneading dough for the flaky breakfast pastry that has become a symbol of good French eating. Baker Frederic Pichard says it's no secret how to make a good croissant.

"It takes savoir-faire and of course milk, sugar, eggs and flour," says Pichard. "But the key ingredient is butter. Out of the eight kilograms of dough here, three kilos are butter. More than a third of croissants are made of butter."

Pichard, who won an award for Paris' best croissant in 2017 and best "pain au chocolat" (chocolate croissant) in 2016, has a contract with a farm that provides him fresh butter. Thank goodness, he says. Because due to a shortage, many Paris bakers are barely able to get the butter they need. Pichard predicts some may turn to using margarine, a heresy for any French cook. 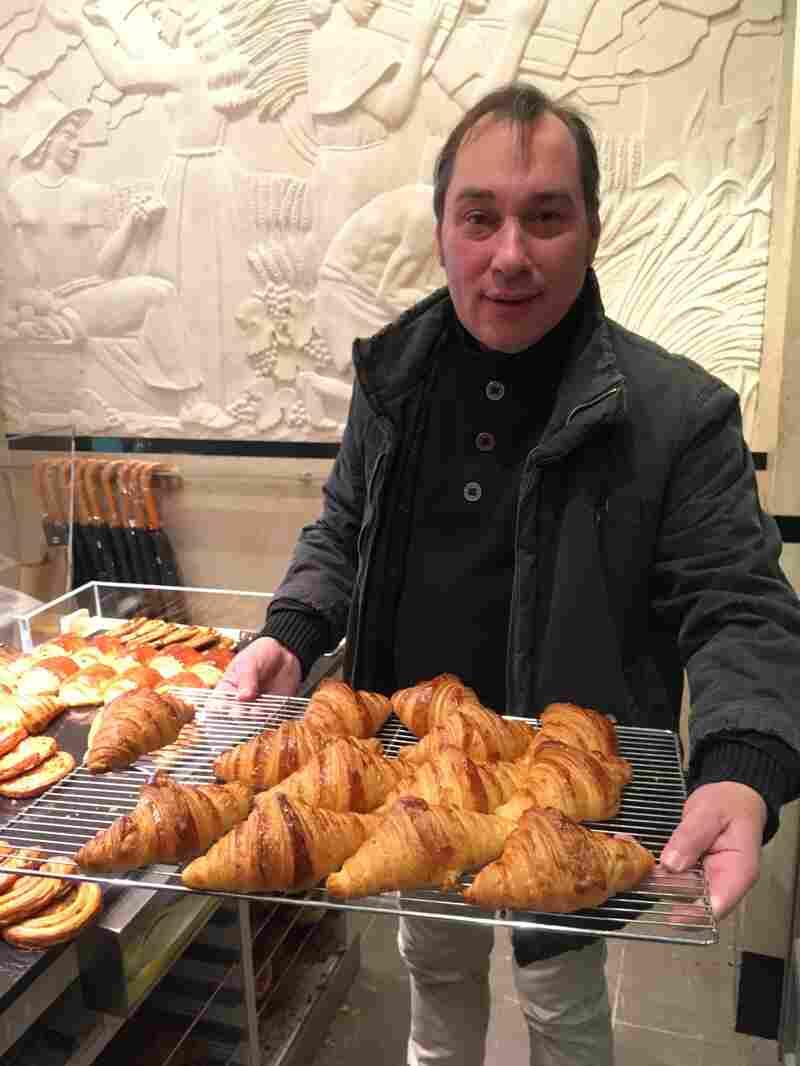 Frederic Pichard, a baker in Paris, says the butter shortage in France may lead his colleagues to turn to margarine as a substitute, a heresy for any French cook. Eleanor Beardsley/NPR hide caption

The land of creamy sauces and croissants is experiencing a butter shortage not seen in recent times. The French consume more butter per capita than any other nation on earth: some 18 pounds per person every year. So fears of running out — whether real or trumped up — has been causing meltdowns.

"You have to understand that butter holds a key role in French cuisine and we eat butter with every meal," says Bernard Rouyer is head of the Centre National Interprofessionnel de l'Economie Laitiere, an organization representing the French dairy industry. "Being French I cannot imagine eating radishes without butter. And we consider the combination of a baguette and butter as the perfect pairing."

The current crisis is the result of increased worldwide demand for butter, with producers struggling to keep up. In the western hemisphere, fat is no longer considered the nutritional enemy it once was, and that's changed attitudes about eating butter. Rouyer points to the cover of Time Magazine a few years that proclaimed, "Eat Butter."

Meanwhile, consumption of butter is growing in many developing countries.

"Some new countries are also importing butter and that was not the case 10 years ago," he says. "Countries like China."

Spread The Word: Butter Has An Epic Backstory

Butter consumption in China has increased tenfold in the past decade, primarily due to increasing incomes and growing urbanization. And Rouyer says people in China have developed a taste for rich French pastries.

The shortage of beurre is whipping up fears and humor across France.

Videos showing how to make butter at home are increasingly popular, and Internet searches on the topic are up 925 percent according to French media.

One French dairy sent a tweet warning of "beurre-out" and listed its telephone number as the emergency hotline.

Cindy Maisonneuve is in charge of marketing for Les Fayes Dairy in the rural Limousin region of France. She says they capitalized on the media frenzy over the butter shortage to get a little publicity. The dairy's tweet included a warning not to turn to margarine.

"We are in an area of the country where we talk a lot about good eating," she says. "We're against processed foods and chemical things. For us, margarine is a heresy," she laughs. "We make fun of people who eat it. Good eating is about simple products that haven't been transformed. Like butter."

Better With Butter? Here's Why Americans Are Consuming More

But much of the crisis in France is self-inflicted. Analysts say it is due to the country's rigid pricing and distribution system. Supermarkets refused to pay higher prices because butter prices are fixed annually. So producers sold their butter abroad.

84-year-old Nicole Regai was face-to-face with the shortage, recently staring at the half-empty butter shelves in a Franprix supermarket in downtown Paris.

"There's nothing left," she says. "Good thing I've got some butter stocked away in my freezer at home."

Regai says the last time she remembers such a butter shortage was during the Second World War.

As a little girl she walked to Paris to escape the Germans.

My "mother was so scared," she says. "We walked 90 miles, and when we arrived, our shoes were gone and the Germans were already here." So the family went even farther south.

Regai says those were very difficult times and there was no butter at all.

Rouyer of the dairy industry says there's some good news on the horizon. After emergency negotiations, retailers have accepted an increase in prices. So consumers will find shelves stocked with butter just in time for Christmas.