Accessibility links
One Woman's Quest To Tell 'The African Story Through Chocolate' : The Salt A Ghana-born chocolatier found that many people — even Africans — weren't familiar with the spices and cultures from other parts of the continent. And it is those experiences she seeks to share. 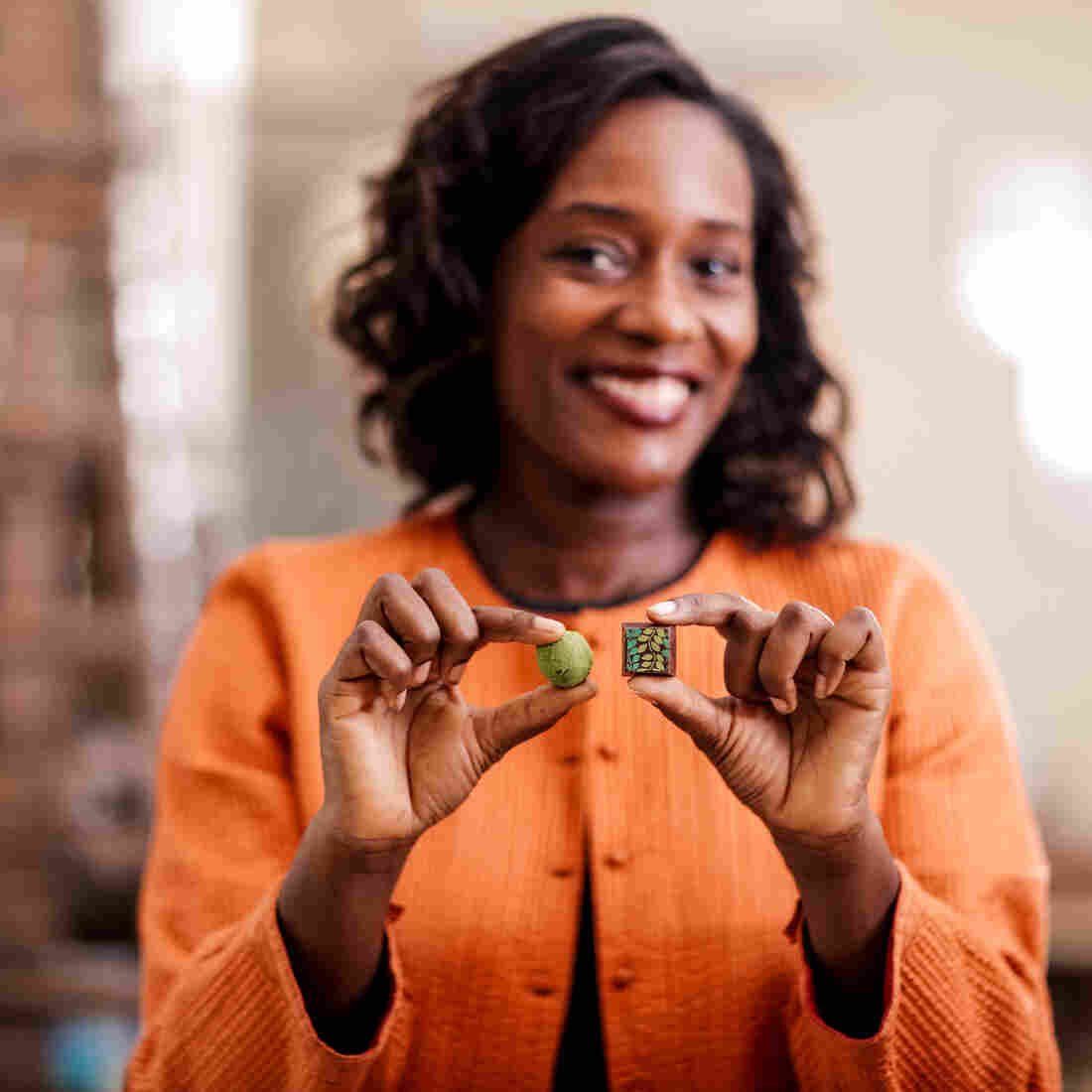 Selassie Atadika, owner of Midunu Chocolates, says she likes to use African spices in chocolate because its "a way to introduce people to our flavor profiles in an easy format." Midunu Chocolates hide caption

When I meet Ghanaian chocolatier Selassie Atadika, the first thing she does is pull a box of chocolates out of her bag. Then, introductions aside, she launches into a story.

It's a story of melding chocolate and spices, of straddling Africa and America, and of connecting cultures and people through taste.

Atadika opens the box of chocolates and points to a powdery green confection in the middle. "This is moringa with white chocolate. Moringa is a leaf, it's known to have medicinal properties." The inside looks like a pale green marzipan, but the taste is mild and grassy, and the mouthfeel is of a dense ganache.

Another truffle has a pattern of cocoa pods embossed on its shell. It's filled with milk chocolate scented with Atadika's own blend of five West African spices. She only reveals one of the spices: prekese, a Ghanaian plant whose fragrant pods are traditionally used to flavor soups. Prekese is at risk of extinction due to deforestation, and Atadika notes that the spice has been included in Slow Food's Ark of Taste, which aims to protect culinary heritage. The taste is nuanced, both fruit and peppery, and utterly delicious.

"It's telling the African story through chocolate," says Atadika.

Born in Ghana but raised in Westchester County, just north of New York City, Atadika grew up thinking she would become a doctor. Once at Dartmouth, she switched from pre-med to geography and environmental studies. Although Atadika dreamed of culinary school, her father objected. She ended up instead in a successful career with the United Nations.

"But I still kept cooking," Atadika says. She has lived in Liberia, South Sudan, Kenya and Senegal, and her work took her throughout the continent. "I really enjoyed it. I ate my way through a lot of countries with UNICEF."

I ask Atadika how many of Africa's 54 countries she has been to. "The list of countries I have not been to would be shorter," she says. For the record, Atadika has been to 43.

While working in Senegal, Atadika joined forces with two more food-loving friends, and created a pop-up restaurant that was wildly popular. After dipping her toes in the culinary world for a couple of years, she finally took the plunge. In 2014, Atadika resigned from the UN, moved back to her native Ghana and began cooking full time.

Atadika started with catering and pop-up dinners. "It wasn't my plan to do chocolates," she says. "But whatever I do in food I look at in terms of adding value, and chocolate just kind of popped in, because we have this cocoa but we weren't really processing it at the level we should be." Midunu Chocolates was born.

Ghana is the world's second largest producer of cacao, after neighboring Côte D'Ivoire. The country produces some 900,000 tons of cacao per year, primarily planted and harvested by small farmers. Unlike Côte D'Ivoire, Ghana still uses plantain and banana leaves for the fermentation process, which Atadika says gives the chocolate a special flavor. With few exceptions, the fermented cacao is purchased by the government of Ghana, which sterilizes and sorts it, then sells it on the open market. Cargill, Nestle and Hershey are all major buyers.

For now, Atadika is a chocolatier (creating truffles) and not a chocolate maker (turning beans into bars), although she hopes to also become the latter one day. "It would be really important to me to be able to identify the farmers that have the practices I want," Atadika says. There are exemptions to purchasing cocoa from the government which allow buyers to purchase directly from farmers, and Atadika is looking into that for the future.

Africa on a plate

In her experience as a chef in Ghana, Atadika realized that Africans themselves weren't necessarily familiar with flavors from other parts of the continent — and sometimes not even from other parts of Ghana. As she does in her dinners, Atadika seeks to inject those flavors into her chocolates. "It's a play on sweet and savory, and a way to introduce people to our flavor profiles in an easy format," she says. 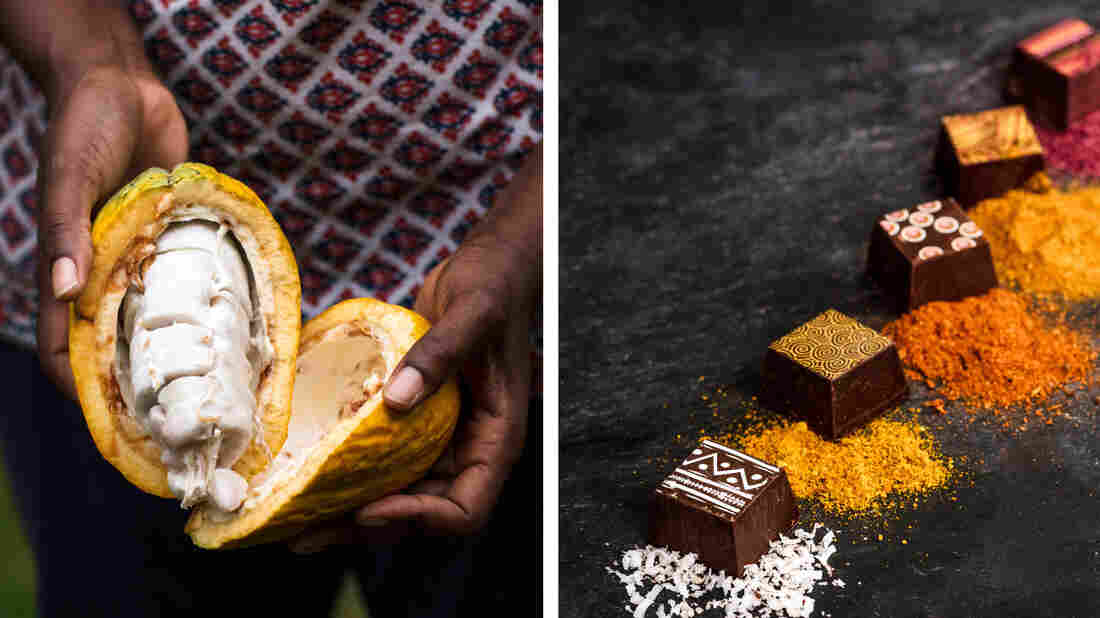 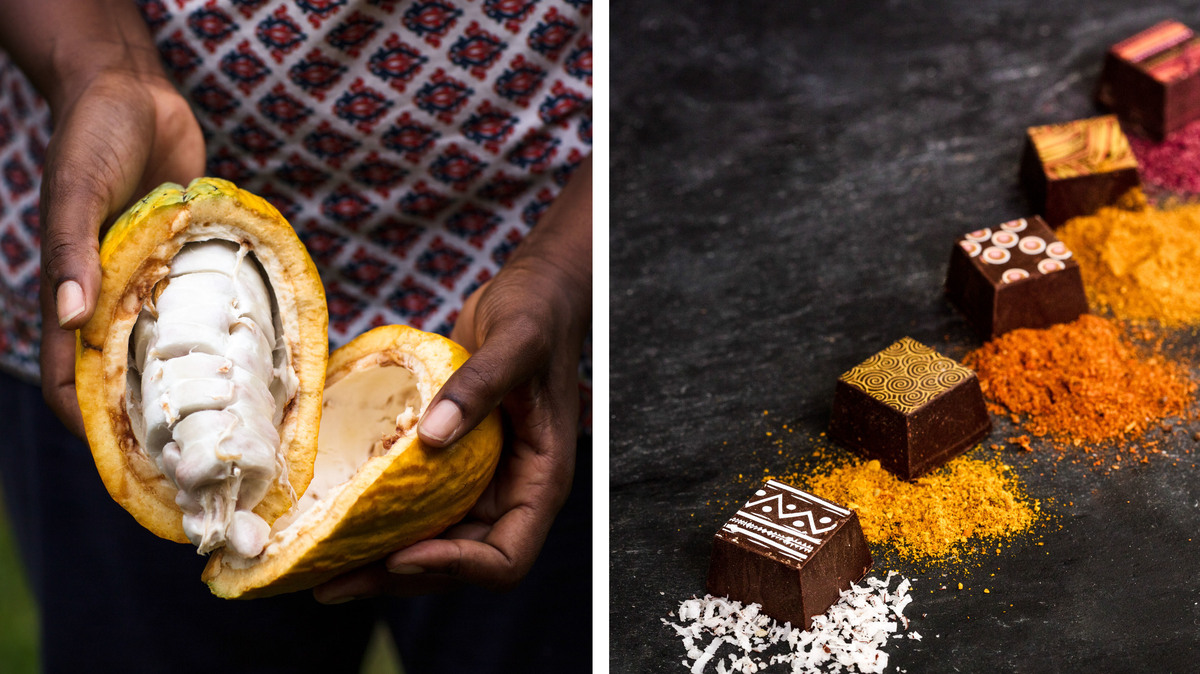 Left, a ripe cacao pod. Right, truffles from Midunu chocolates contain spices and flavors from all over Africa.

Atadika says that she is narrating stories of Africa on a plate. Cape Malay curry from southern Africa, berbere chili from the Horn of Africa, and ras el hanout from Northern Africa all make appearances. "I like to pick the spices that have a little bit of complexity," says Atadika. "For example, the berbere, it's not just a chili flavor. There's cardamom, there's coriander. There are different flavors that you will taste at the beginning of the chocolate, and by the end you get the heat, so there's always a little bit of a surprise."

Using savory in sweets is unusual in Ghana, and Atadika attributes her willingness to break the chocolate mold to her American upbringing. She describes Ghanaians as conservative in the way they see food, and herself as unafraid of playing around with new ideas. But she also wants to experiment with flavors as a way of safeguarding traditional ingredients — like prekese. "You need to find a way to keep it relevant in the context of today to make sure it's still used."

Not all of Midunu's 22 flavors are savory. A jelly paste of basil-scented pineapple is in encased in one chocolate shell, while a fruity pink concoction of hibiscus, spices and white chocolate fills another. Some flavors are seasonal, such as chocolate infused with African star apple, a tart orange-colored fruit with seeds that form the shape of a star. Native to Nigeria, the fruit is only in season for about six weeks.

It's all in the name

Like any good storyteller, Atadika chooses names carefully. She has bestowed on each chocolate a woman's name from the region that the flavors represent. West African five-spice — Adwoa; Ethiopian berbere — Almaz; North African spices — Laïla. And the company name, Midunu, is a story in itself.

"Midunu is an Ewe word," Atadika explains. Ewe is one of the 250 languages spoken in Ghana. Short for "va midunu," it means "come, let's eat," and was what Atadika's father would say to call the family to dinner each evening. She adds, "In many African cultures, you never eat alone. There's always an invitation, no matter how much or how little you have, to always invite anyone else around you to share."

How does Atadika's story end? Right now, she's looking into moving into bean to bar, ramping up production in Ghana, or possibly adding a production facility in Europe. Whatever her next chapter is: midunu — let's eat!