Accessibility links
Puerto Rico's Hurricane Recovery Hinders Farm Businesses' Seed Research : The Salt Many agriculture companies rely on the island's climate for the research and development of commercial corn, soybean and other seeds grown in the U.S. But the storm wiped out needed infrastructure. 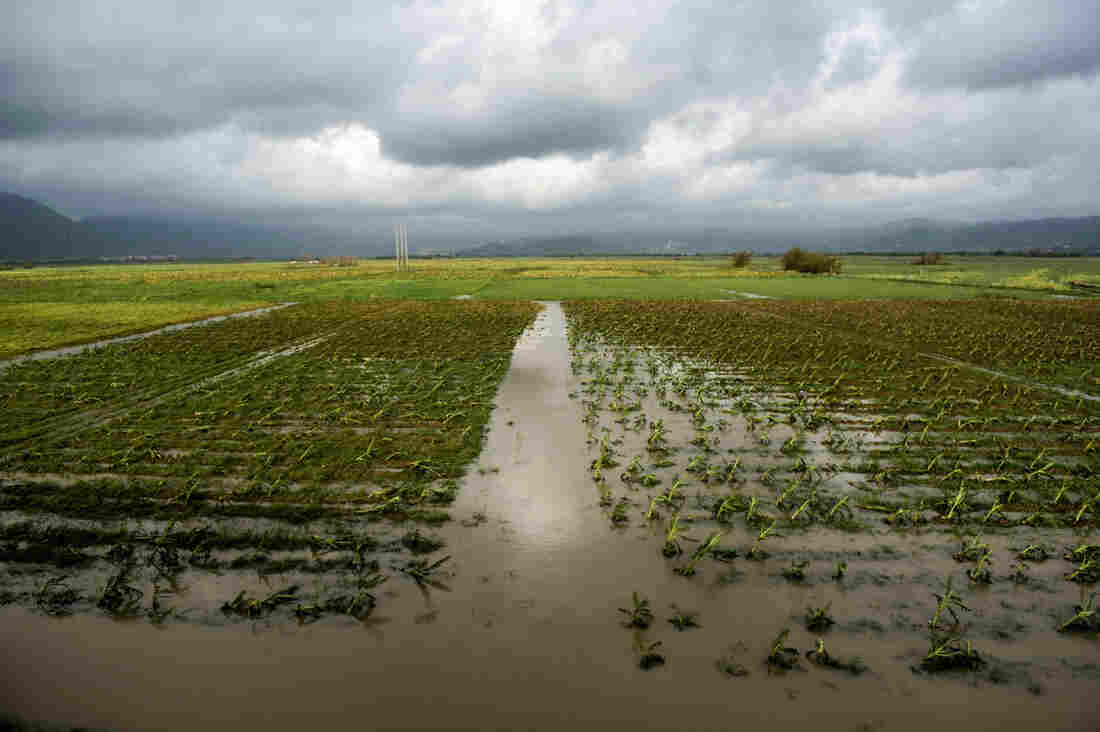 The hurricane knocked out power to millions and destroyed water infrastructure. It also tore up plants across the island, washed soil off fields and knocked down fences. Carlos Giusti/AP hide caption 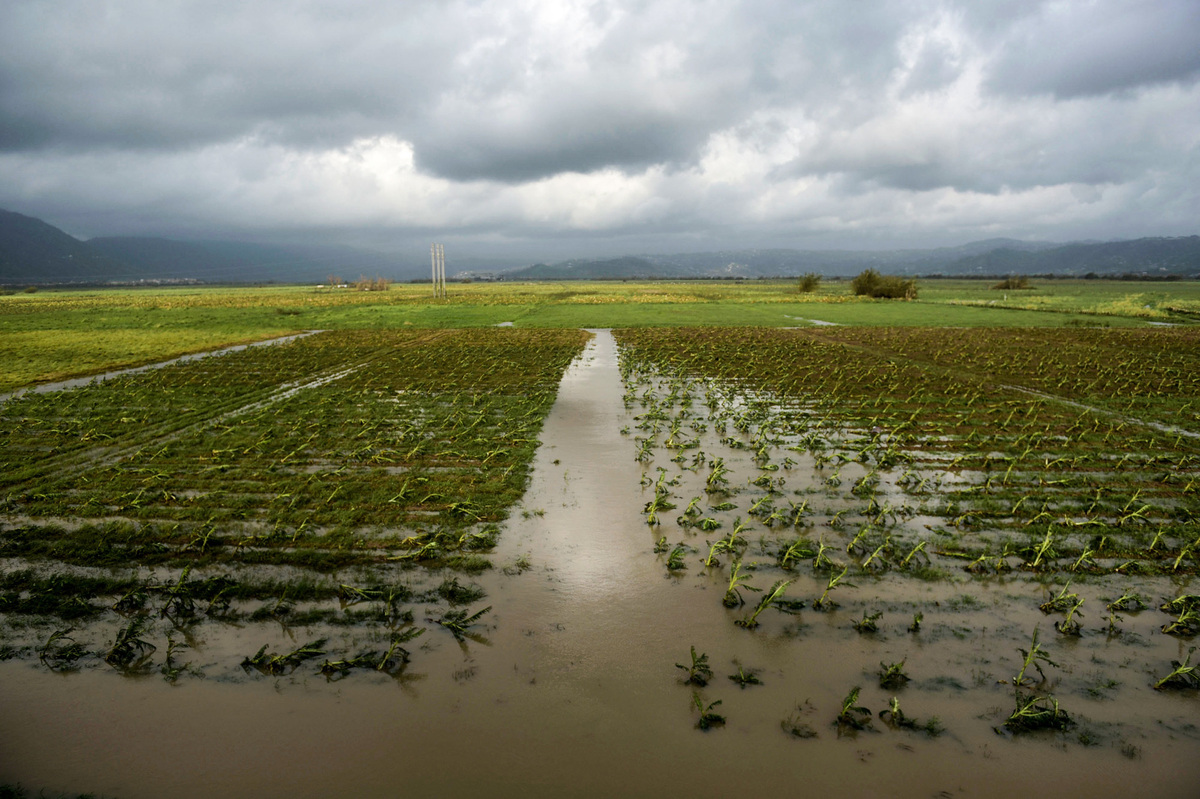 The hurricane knocked out power to millions and destroyed water infrastructure. It also tore up plants across the island, washed soil off fields and knocked down fences.

Puerto Rico's hot winter days and warm nights have played a key role in the global seed business for more than 30 years. So, the devastation wrought on the U.S. territory by Hurricane Maria in September stretches to the croplands of the Midwest and Great Plains.

Fields in Puerto Rico are used for research and development of up to 85 percent of the commercial corn, soybean and other hybrid seeds grown in the U.S., according to the Puerto Rico Agricultural Biotechnology Industry Association.

From small regional seed producers to multibillion-dollar powerhouse players like Monsanto, Bayer and DuPont, companies that strive to improve the quality and consistency of their products or want to verify the purity of their seeds before putting them on the market turn to Puerto Rico. There, one can plant three seasons of corn and soybeans year-round. Sunflower, sorghum and cotton also are grown for research.

The hurricane knocked out power to millions and destroyed water infrastructure. It also tore up plants across the island, washed soil off fields and knocked down fences.

Some projects were moved quickly to other locations where seed research is done, like Hawaii, Chile and Argentina. Because most of the planting for this winter had not begun yet, Carrión says the biotech companies were able to get their operations up and running.

"Our companies have water and some already have electricity," she says. "we are open for business." But that doesn't mean business is as usual.

The company scaled back to just one after the storm wiped out generators, stole the roof off of a building and damaged another. Instead of squeezing more profit from the single farm by growing contract research plants, 3MG is producing watermelon, honeydew and cantaloupe.

"One of the things we kind of talked about was stopping the fruit and vegetable growing in favor of our customers," Baumgartner says, "and as we thought about it we realized we couldn't because we needed the food on the island."

There have been other challenges: spotty cell service, limited electricity and having to layoff employees when it became clear there would be less work.

"We kind of operate like family," she says, "and so to have to reduce the number of staff has been difficult."

Yet, the projects are mostly on schedule, and planting is now underway.

That's good news for Les North of MayerSeedline, who leaves his Iowa home each winter to inspect the rows of corn 3MG has planted in Puerto Rico for his company. He looks for anomalies that, if too common, may indicate a problem with a whole batch of seeds.

His trip may be shorter than usual this year because federal emergency responders were occupying all the rooms through the end of the year when he called last month.

"I hope to be down there probably between Christmas and New Year's," he says, though the earliest he could make a reservation was Jan. 2. "The hotel doesn't have rooms available at this point."

Still, he expects to be able to verify the quality of his customers' corn seeds in time for them to ship to farmers in the spring.

Purity standards have been around since the 1939 Federal Seed Act, which aimed to protect farmers.

"It was trying to do away with the situation, 'Let the buyer beware,'" Iowa State seed lab manager Mike Stahr says. "And so the seed companies, if they want to stay in business, they're going to have to keep the farmers happy."

North estimates between 50 and 70 percent of the seed corn planted in the U.S. has been put through an in-the-ground test — whether that's in Puerto Rico or other places. Though lab testing has become more sophisticated over the decades, Stahr says there's no substitute for growing out the plant.

"There's value in doing both," Stahr says. "There's certain characteristics we can't see in the lab."

Liliana Sanchez Cortes runs Puerto Rican operations for seed giant Syngenta. She rode out the hurricane in her home in Ponce, but quickly went back to work assessing the damage.

"My boss asked the question immediately, 'Are you going to be able to run the season?' And I explain, yeah, this is my work plan and this is how I need your support."

The company gave its employees generators, water and ice — necessities on a tropical island where nearly two months after the hurricane more than 60 percent of residents are still without electricity and nearly 20 percent don't have safe drinking water, according to a report from the International Medical Corps.

Sanchez says she's gotten the support she asked for, but things are tough for the 45 full-time workers. Three lost their homes and some are still without functioning cooking stoves.

Plus, she's struggling to find the 500 seasonal workers Syngenta needs for the winter because thousands of people have fled the island.

"We are trying to look for the people that usually come to work for us," she says, "and they are not in the island anymore."

Seed companies remain committed to Puerto Rico because its climate and location make it an accessible and practical place to work during the winter. That's something even Hurricane Maria couldn't strip away.