Accessibility links
'The Hardest Bakery Possible': Reinventing The Meaning Of 'Whole Grain' : The Salt A handful of bakeries are pushing the envelope of what's possible — and palatable — by leaving the bran and germ in freshly milled grains from local farmers, who also help drive the menu. 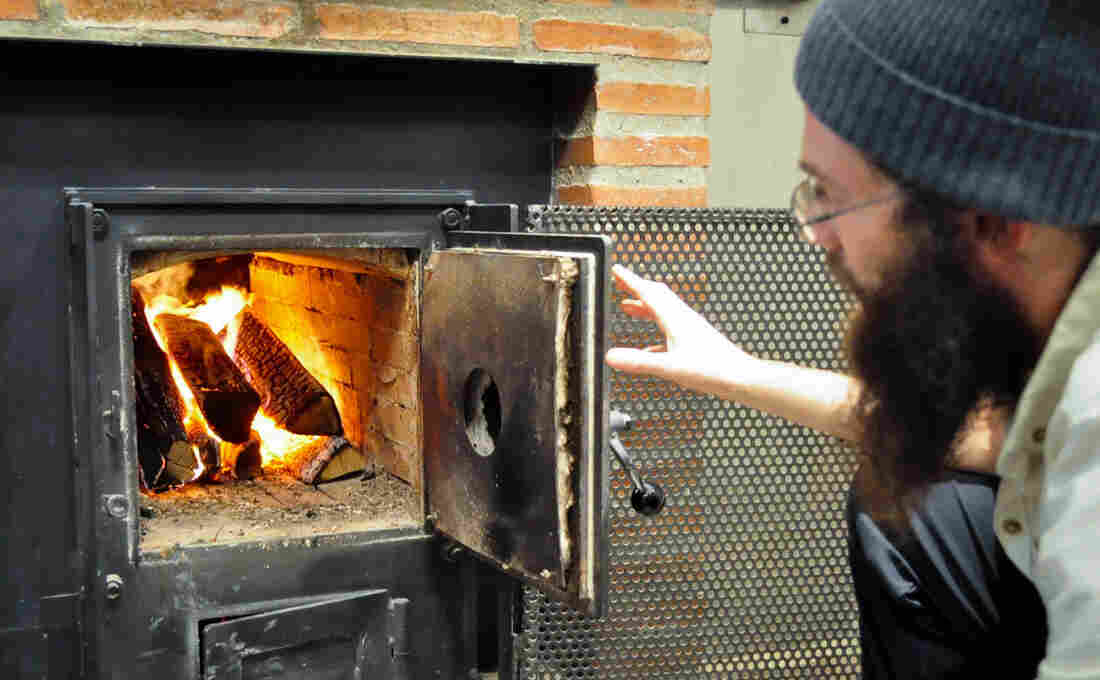 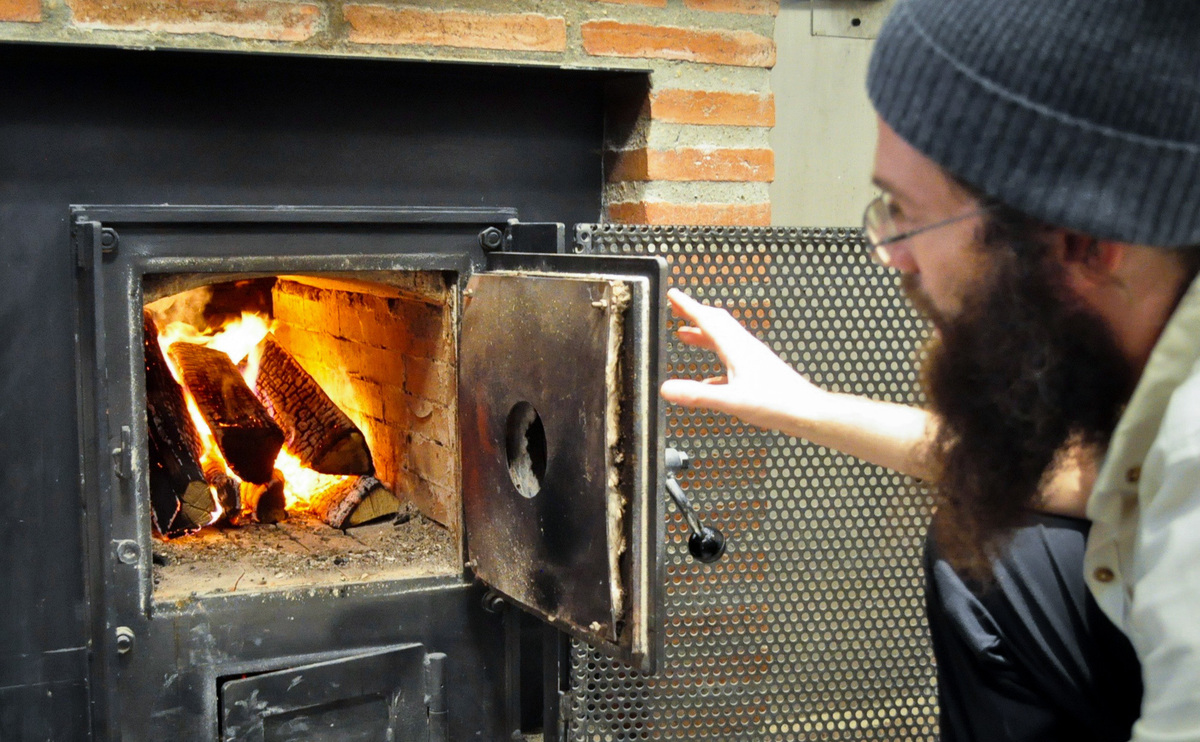 Jonathan Bethony bakes his whole grain breads in a wood-fired oven, heated to about 500 degrees, to help the weighty loaves rise.

Jonathan Bethony admits the breads he'll be churning out at Seylou Bakery & Mill, which just opened this month in Washington, D.C., might not appeal to everyone.

The dark crusts of his pain au levain have a charred appearance and complex flavors to match their hue. Inside the loaves, a toothsome chewiness gives way to the tang of sourdough and a taste that can only be described as distinctly wheat-y.

But those characteristics are not an accident. They're the fruit of a baking process that is pushing the envelope of what's possible — and palatable — when working with locally sourced, freshly milled whole grains.

"There's a lot of preconceived notions about whole wheat," says Bethony, whose bakery is among the first in the Mid-Atlantic — and a handful of bakeries nationwide — selling 100-percent whole wheat sourdough loaves, "so I just like to call it bread."

Grocery store breads can be labeled "whole grain" if 51 percent of the flour contains the grain's three components: the endosperm, the germ and the bran. The rest of the mix could be white flour, which includes only the gluten-rich endosperm that gives baked goods their structure, but leaves some of the grain's nutrients behind.

Leaving the bran and germ in the flour might sound easier than sifting them out, but it transforms the baking process into an arduous, if rewarding, experiment. As the first resident baker of the Bread Lab at Washington State University, Bethony spent three years conducting such experiments as a protégé of the country's foremost whole grains-focused wheat breeder, Stephen Jones, who directs the lab.

"Most of the formulas we're working with were designed for white flour. In many ways, you're starting from scratch," says Jones. "You have to bring tremendous skill back into the whole formula."

Bread Grains: The Last Frontier In The Locavore Movement

There's a reason bakers have been sifting the weighty bran out of their bread for centuries: Baking with it in the mix is inherently difficult. Doing so without the help of added white flour, gluten or yeast is even harder. But Bethony, a bearded former musician who compares the strategy required for this style of baking to "playing an arcade full of video games at the same time," thinks he's up to the task.

Leaving the bran and germ in the bread adds nutrients and flavors — but it's also a bit like adding rocks to a delicate spider's web, says Bethony.

"It takes way more finesse to get an open crumb," he says, referring to the airy pockets that give baked bread its desired texture.

In lieu of yeast, Bethony battles this added weight with fermentation in the form of a bubbling sourdough starter he made in D.C. (Recipe? Add water to flour and wait.) To infuse moisture into the bread, he uses a "wet dough" that contains more water than flour, which leaves the resulting dough too sticky for a machine to form into uniform shapes. That's one of the reasons Bethony forms the loaves by hand before feeding them, one at a time, into a 500-degree, wood-fired oven.

If that sounds exhausting, consider the task he's given his pastry chef, Charbel Abrache: to make croissants, canelés and other confections from only whole grains and no refined sugar. 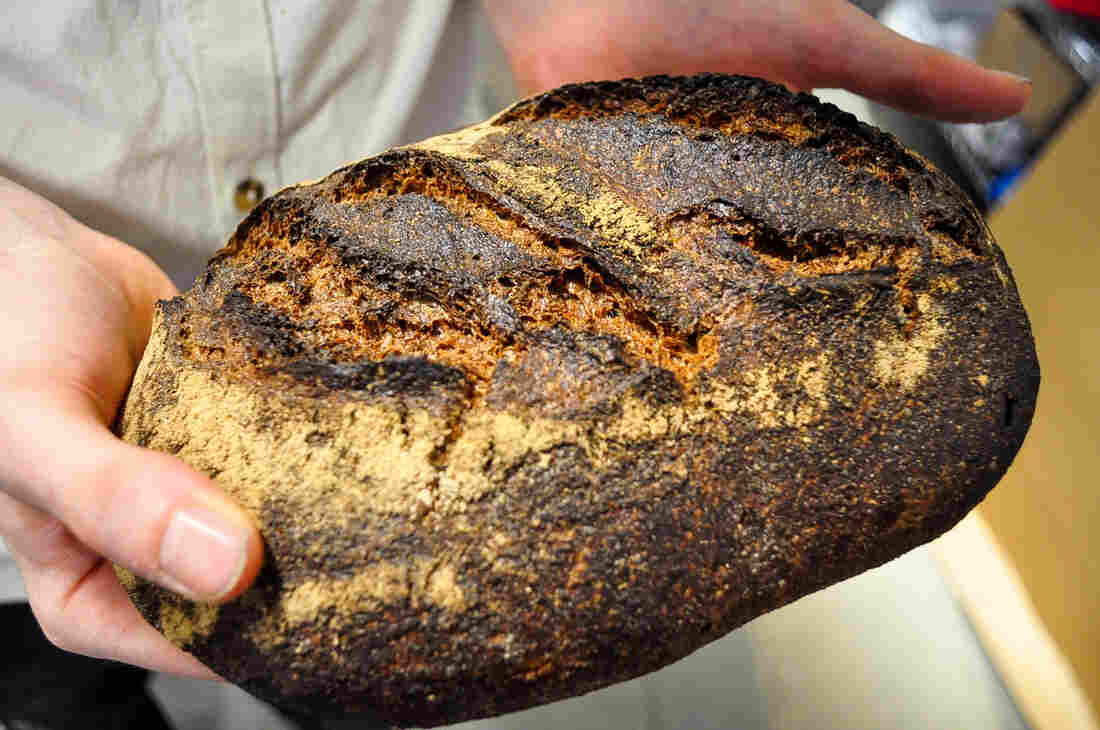 The D.C. bakery's loaves emerge from the oven in dark hues to match their intensely wheat-y flavors. Whitney Pipkin for NPR hide caption 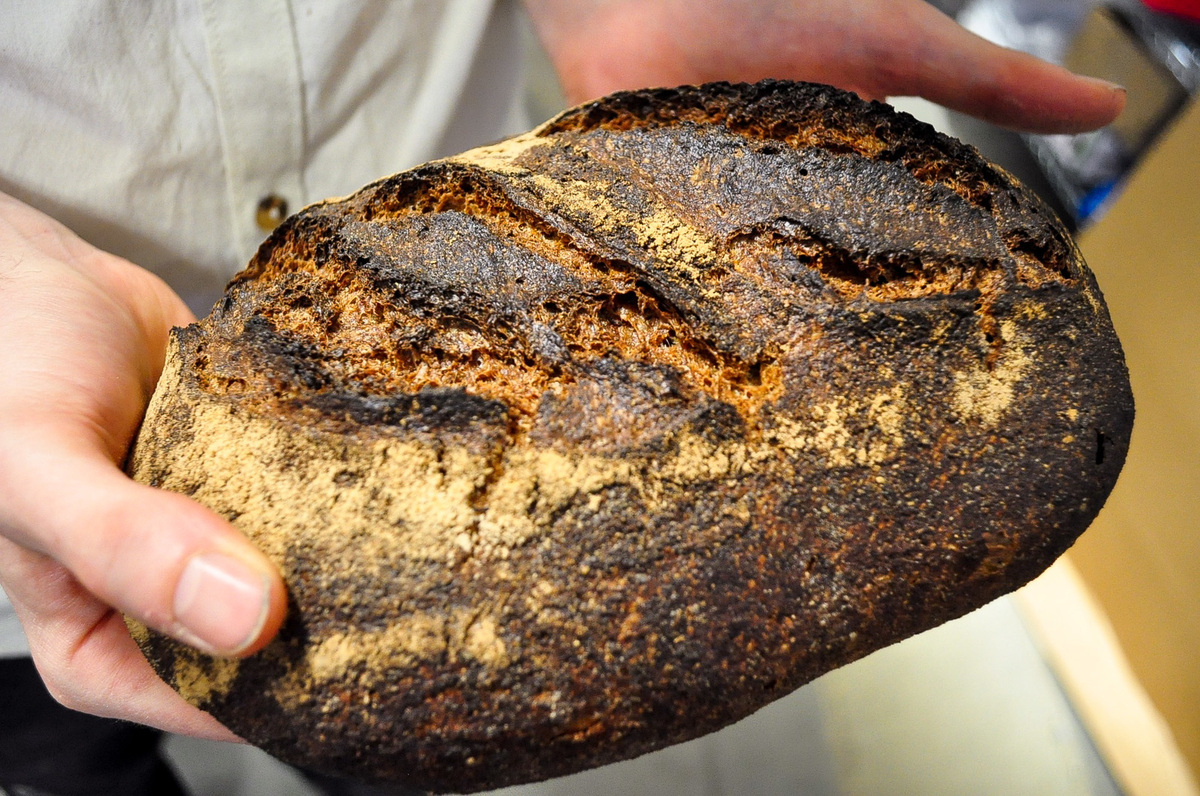 The D.C. bakery's loaves emerge from the oven in dark hues to match their intensely wheat-y flavors.

"Some of my baker friends were like, 'Why did you make like the hardest bakery possible? Being a baker is hard enough,'" says Bethony, who answers this question and the why-the-wood-fired-oven one in the same way. "It helps keep me grounded."

Like the breads, the pastry menu is driven by what local growers such as Maryland farmer Heinz Thomet are growing. If the farmer says he needs to grow millet and sorghum in rotation with the wheat to improve his soils, Bethony wants to find a way to work them into the bakery, too. Having his own mill in the bakery allows Bethony to not only churn out fresh flours for baking but also to work directly with local growers.

To that end, the canelés on Seylou's menu are made with millet flour and sweetened with sorghum syrup. The brownies are made with sorghum, and both are inadvertently gluten-free. Abrache is now experimenting with locally sourced butters — rather than the industry standards from Europe — for the croissants, as if baking them with whole wheat wasn't already a feat.

Part of what makes whole-wheat baking tricky is that all the recipes have been written and all the wheat has been bred primarily with white flour in mind — until recently. At the Bread Lab, Bethony's mission was to develop baking techniques for wheat varieties that work well for local farmers, and, without wasting any of their components, to achieve as many flavors as possible.

"So I started sprouting and toasting and popping and malting. I started deconstructing it all and then putting it back together," Bethony recalls. "We came up with this galaxy of different flavors with just the grain."

These experiments were intended to prove the theory that what's good for the soils is good for human health and can taste better, too. It's one that bakers such as Dave Miller in Northern California, Josey Baker (that's his real name) in San Francisco and Marc Vetri in Philadelphia have been testing on patrons for a few years now, translating local ingredients into whole-grain loaves.

After the Bread Lab, Bethony worked briefly with another forerunner of this breed of baking, New York chef Dan Barber, to help design his bread program at Blue Hill at Stone Barns. (The chef is so into whole grains that he had Jones breed a new, flavor-first variety called Barber Wheat expressly for whole-wheat baking.)

"What all these bakers would say is they're not forcing anything on anyone," says the Bread Lab's Jones, whose annual Grain Gathering attracts the industry's leading bakers, millers, growers and breeders. "What we know as bakers is there is value in using the whole kernel. The beauty for many of us is it comes with flavor and nuance. There's no compromise."

For Bethony, turning the daily experiments of the Bread Lab into consistent, commercial loaves won't be easy. But neither was making "good bread" out of whole grains and nothing but the grains.