Accessibility links
The Politics Of Myanmar's Changing Tea Culture : The Salt Myanmar's tea shops have long been central as public spaces to meet and talk, especially during the military regime. But with the country's "opening" to Western influence, their prominence is fading. 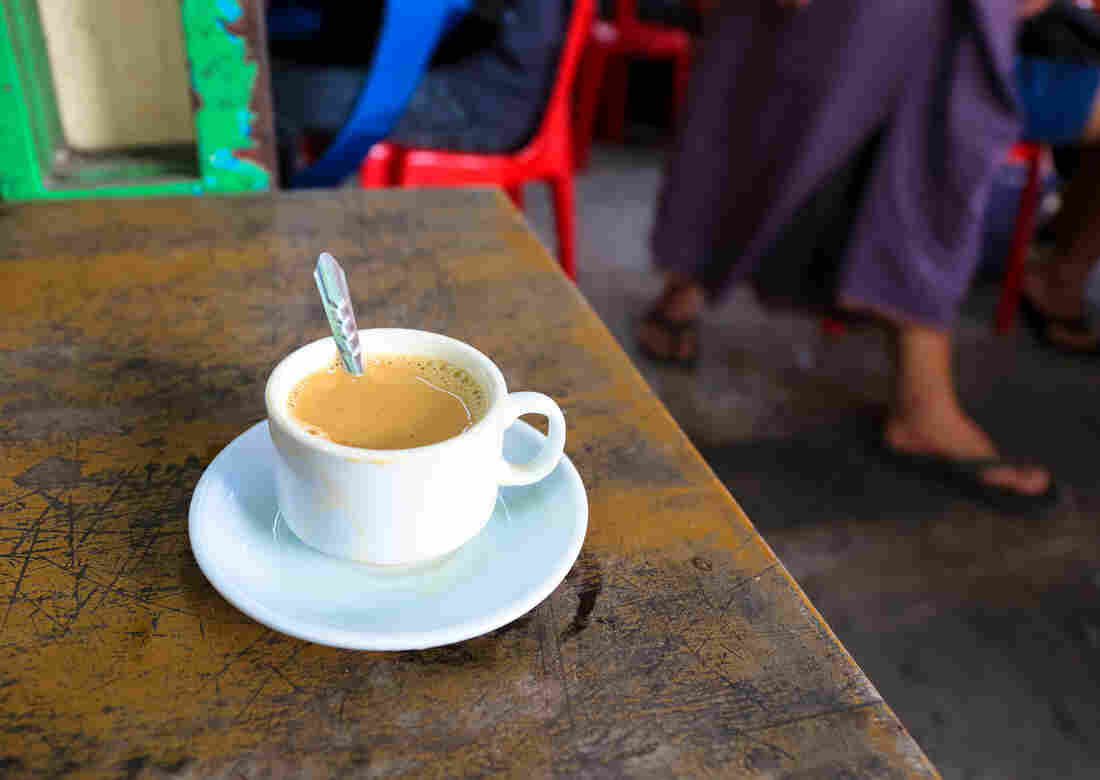 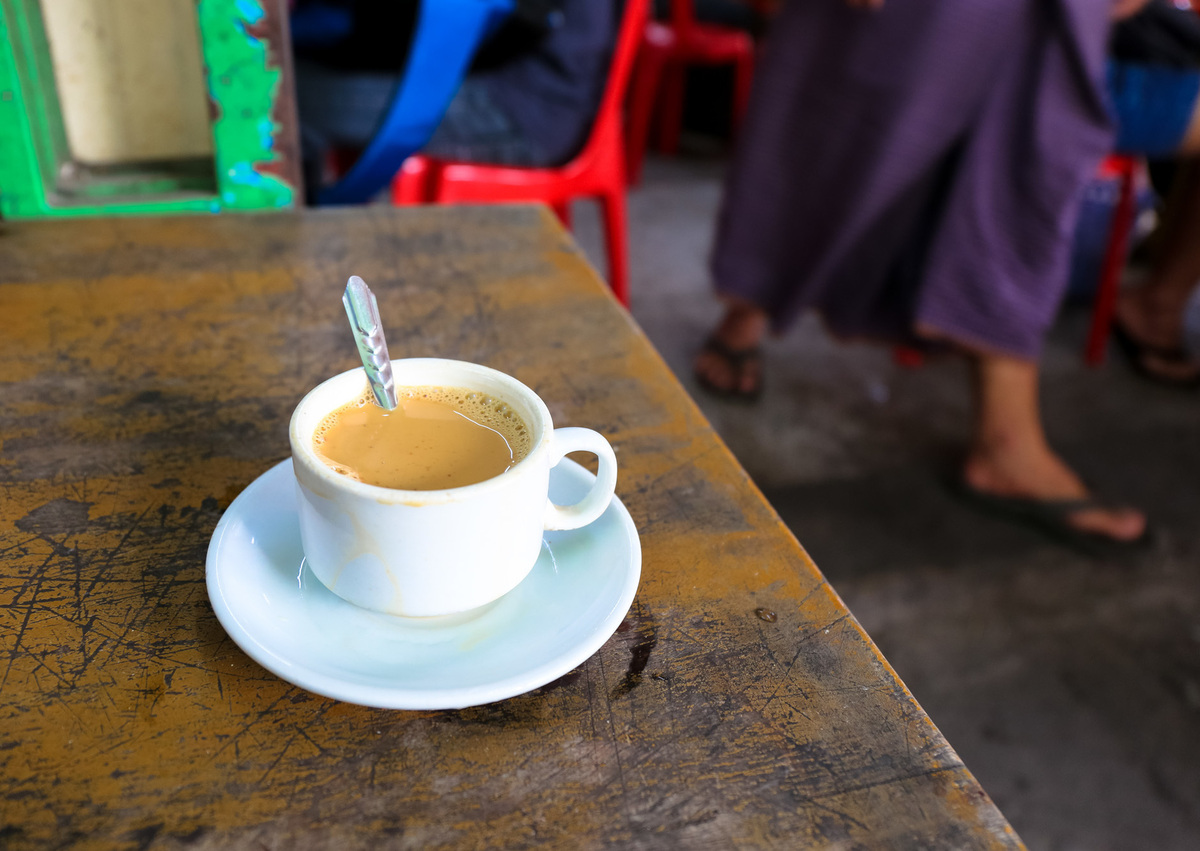 Pulling low wooden stools out from under a short square table, a group of longyi-clad men sits down at an open-air tea shop in downtown Yangon, Myanmar. One man makes a kiss-kiss noise and calls out an order to the young waiter. Moments later, porcelain teacups filled with steaming laphet yay — sweet Burmese tea carefully mixed with black tea, evaporated milk and sweetened condensed milk — start to hit the table, and the men's conversation begins.

From the crowded sidewalks of Yangon to the small villages of the country's northernmost Kachin State, tea shops have been a long-standing part of Myanmar's cultural history.

"Tea shops are not just where people go to get good, cheap food," says artist Kaung Kyaw Khine, 35, who earlier this year was featured in an art show in Yangon focusing on tea shops. "It's a part of our culture, history, and where people go for all matters in life."

Some historians say that a major catalyst for Myanmar's infamous 8888 Uprising — in which hundreds of thousands of people across the country rose up against military rule in 1988 — was when a fight broke out in a Yangon tea shop over what music to play broke out between two youths (one of whom was the son of a military official) in a Yangon tea shop.

But not all politics make it into tea shops. While the rest of the world focuses on Myanmar because of the plight of the Rohingya Muslims, hundreds of thousands of whom have fled the country amid a brutal military crackdown, you won't hear talk of that crisis in tea shops. Those kinds of discussions tend to stay in the home. 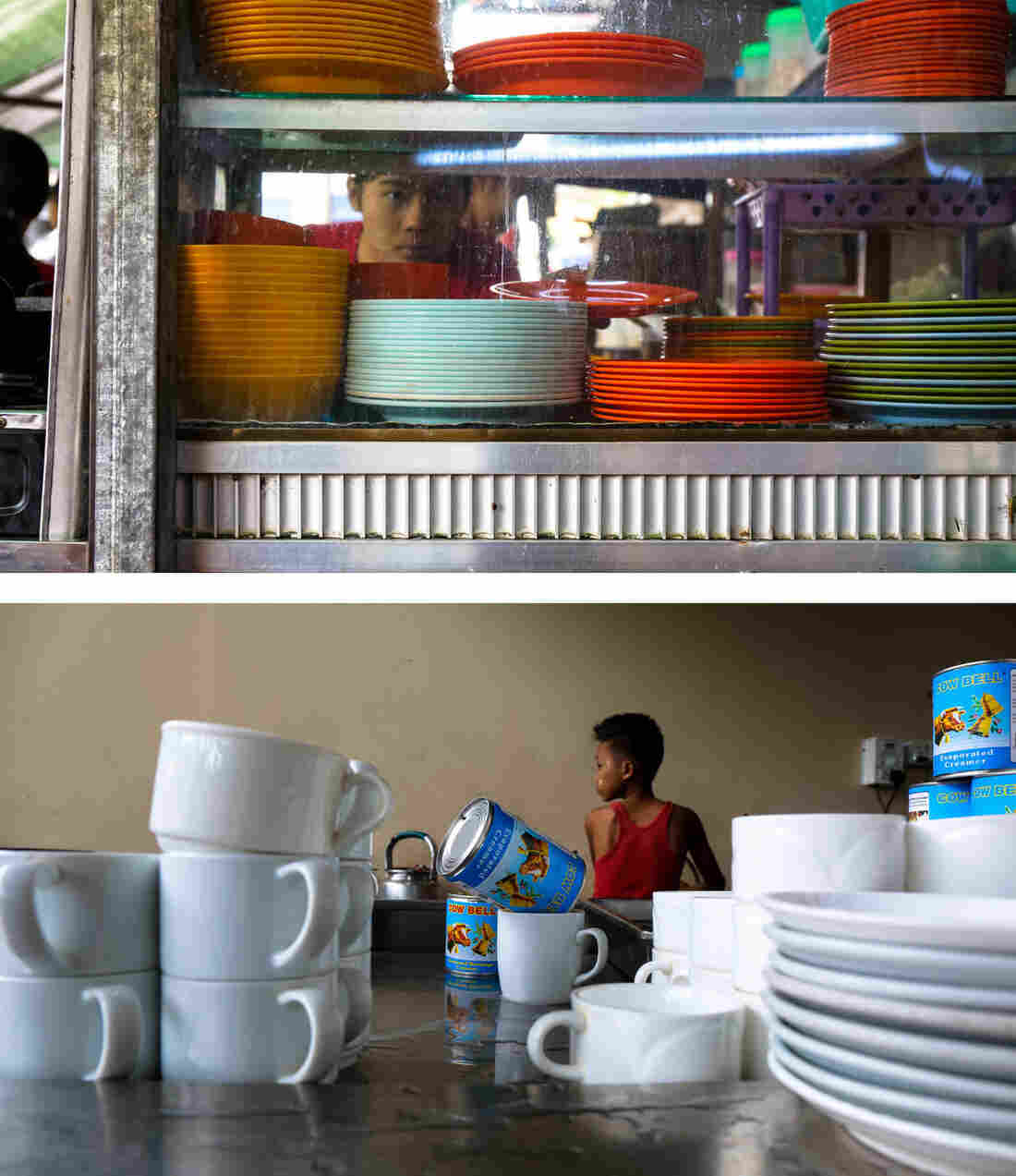 Tea shops in Myanmar are owned by both men and women, but the clientele is traditionally male-dominated. And, more recently, Yangon's tea shops are missing one more thing: young people.

"Most young people, I think, spend their time at malls, clubs, bars or lesser-known spots of their choice," says 21-year-old artist Kyaw Moe Khine. "I grew up hanging out at book and movie rental stores, and started hanging out at Internet cafes around seventh grade. I might have gone to the tea shops if all the people from those places went there."

The rapid increase of Internet accessibility and cellphones have both had an impact on Myanmar. As recently as 2011, Myanmar had the second-lowest population of people with cellphones in the world — being ranked only above North Korea. Isolation imposed by military rule and the high cost of phones meant only the rich had access to cellphones. But the increased modernization of the country, coupled with the plummeting cost of cellphones and SIM cards, has changed that.

The Myanmar Computer Federation estimates that more than 90 percent of the country's 54 million people now have access to a phone with Internet service, with more than 60 percent using social media platforms such as Facebook Messenger for low-cost communication. 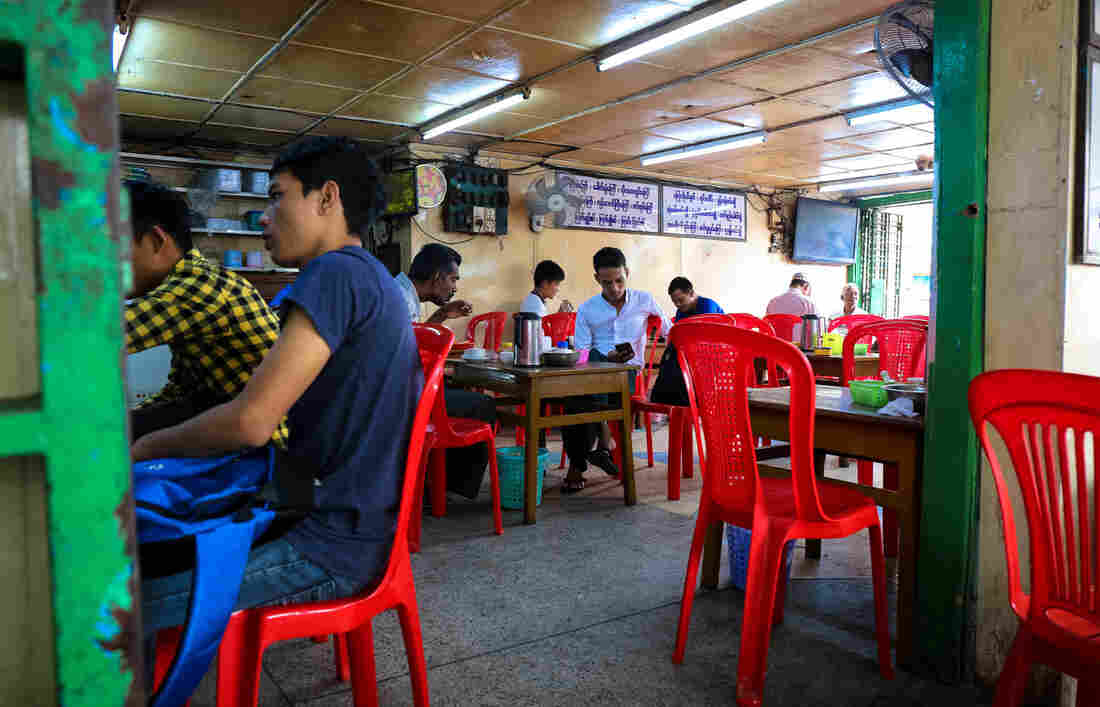 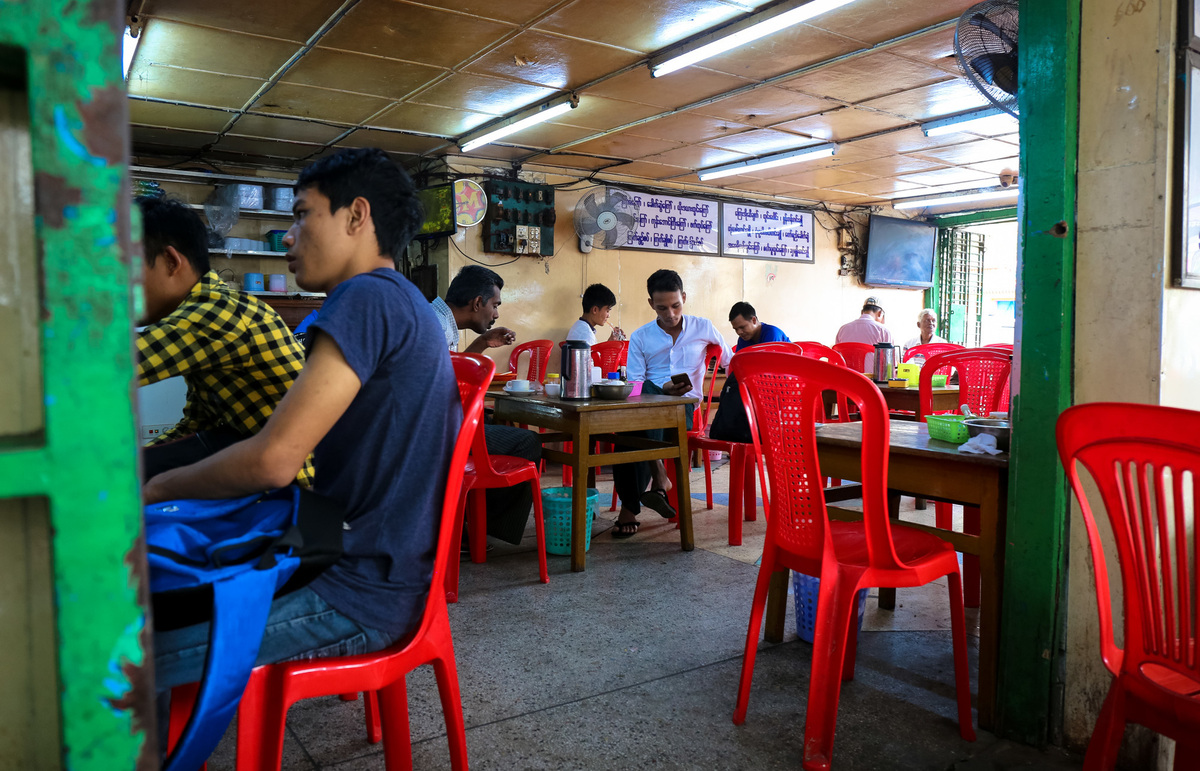 "I do think the tea shop conversations are less popular since the recent boom of smartphones and Facebook. Everyone and everything is on the phone now," says Htun Lynn Zaw, 21. "It only makes sense that people like to share their opinions, create dialogues, reach out to a lot of people and get social validation from Facebook rather than doing these in a [small] tea shop circle of friends."

And some young people in Myanmar look to emulate what they see in mainstream Western media.

"Young kids mimic what they see in their favorite celebrities," says Kyaw Moe Khine. "People just changed along with the rise of social media. It's more of a cultural assimilation."

But as Myanmar modernizes and changes, so do some of its tea shops.

"The recent boom of capitalism also feeds the buying of comforts. People from the middle class and above are more likely to choose a comfortable and air-conditioned cafe over tea shops," says Htun Lyn Zaw. "Which is why I think a lot of famous tea shops like Morning Star Cafe are trying to improve and integrate into the scene."

Walking into Morning Star Cafe in Yangon's Tamwe Township, patrons are greeted by high ceilings, new plastic tables and a fountain — a departure from traditional cramped, bustling and loud tea shops. The food menu still has traditional Burmese tea shop items like samosas, mohinga and fried rice, but nontraditional items like coffee and Chinese dim sum are offered as well.

"We wanted to keep the old character of our original Mandalay location, but also wanted to create a nice new place for people to come to," says Min Thu, 23, one of the managers of Morning Star Cafe. "We have the usual traditional snacks and tea, but we've also added new menus, and have a new building people can sit comfortably in." 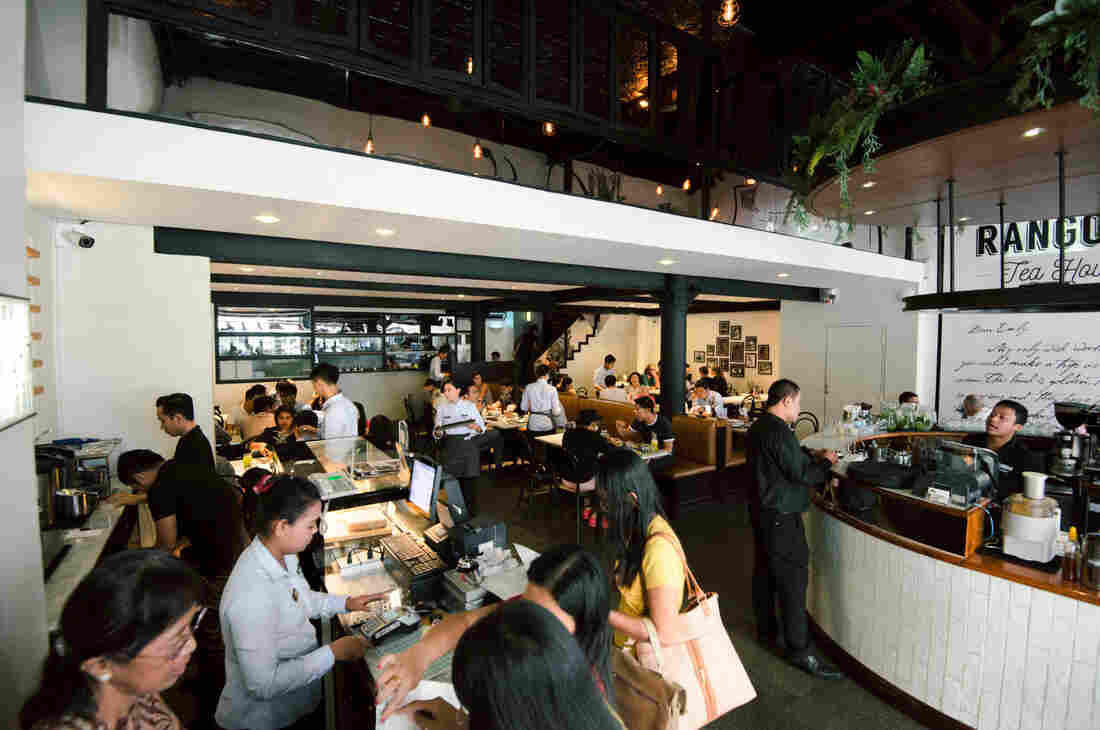 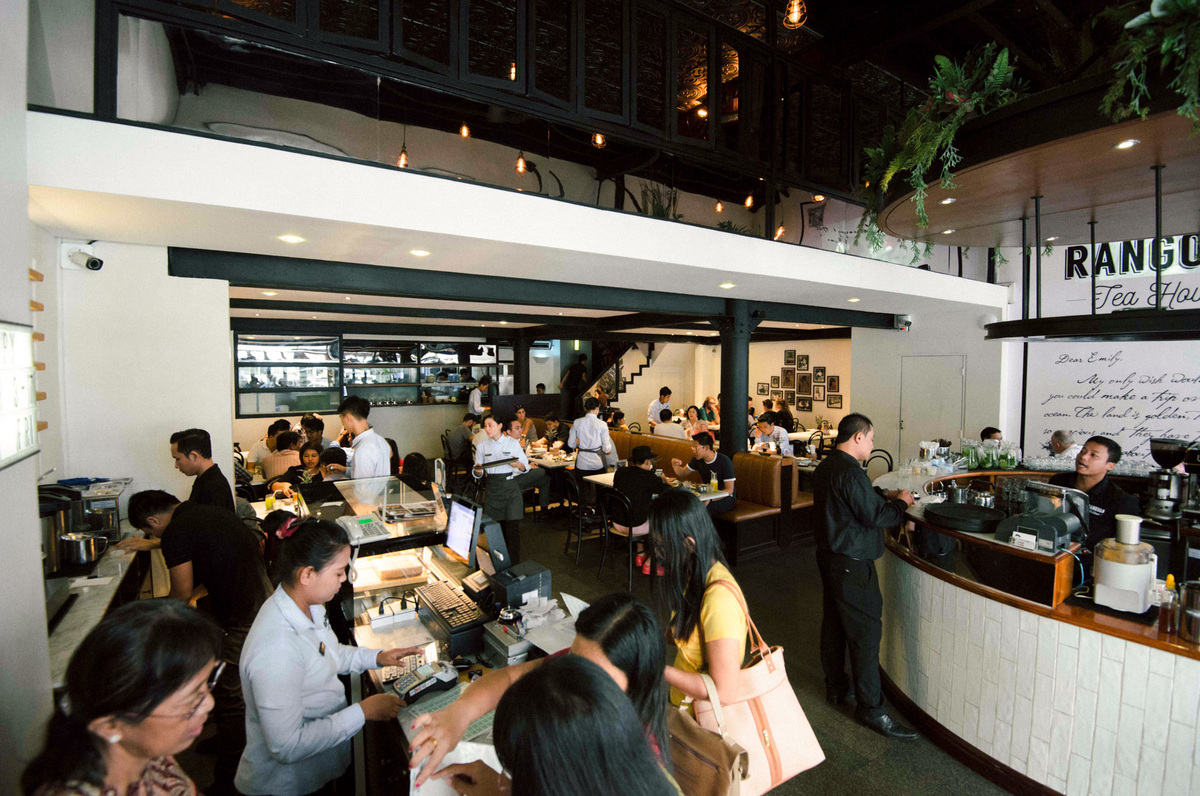 In downtown Yangon, customers visit Rangoon Tea House — an example of a tea shop in Myanmar that is exploring new styles.

Rangoon Tea House, co-founded by 26-year-old Htet Myet Oo in 2014, offers another modern take on Myanmar's traditional tea shops. With a full bar, cushioned seating and an extensive food menu with traditional Myanmar food with Western twists, the establishment is more like a hybrid between a hip European restaurant and a crowded Myanmar tea shop.

"People used to use tea shops as space to talk politics or broker a deal. Now there are so many places where you can do that," he says. "So we wanted to create a place that appreciates the fun and unique aspects of tea shops, while also being comfortable."

Htet Myet Oo also says that the atmosphere of tea shops can act as a gauge of Myanmar's political and social climate.

"For example, when [prominent Muslim lawyer] U Ko Nyi was assassinated almost a year ago, you could walk into Rangoon Tea House and feel that something had happened," Htet Myet Oo says. "The whole place was quiet, with people speaking in low voices."

He says that while he has seen a change in Myanmar's tea shop culture, he doesn't believe Myanmar's traditional tea shops will ever entirely disappear.

"In order to appreciate what our culture has, people have to go out and experience other things," he says. "But I think a reason locals choose to come here — and other tea shops — is because of that appreciation for Myanmar's culture and food, and because we're starting to realize what is at the heart of the tea shop buzz: It's us and our culture."