Accessibility links
Haute Dots Of Sauce: Culinary Art Or A Horror Show On A Plate? : The Salt Chefs the world over seem to love serving patrons tiny portions on pristine white plates garnished with dainty drops and squiggles of sauce. Not everyone is impressed, and resistance is mounting. 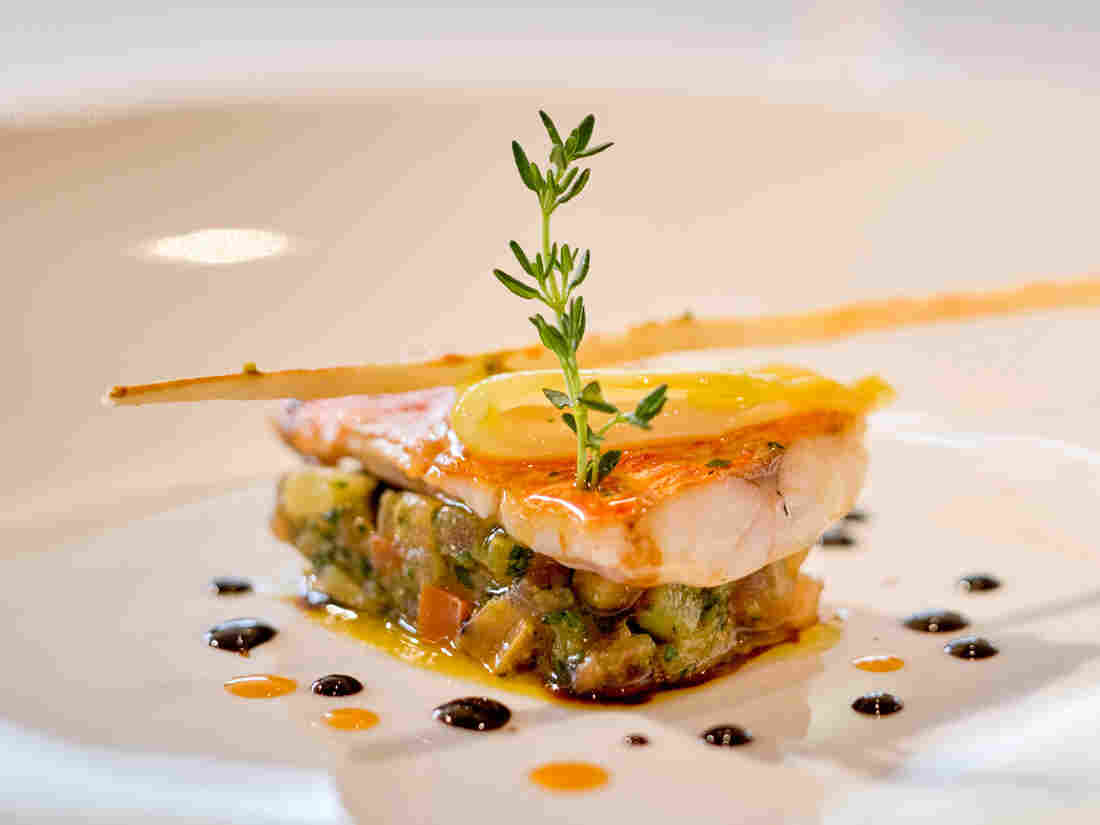 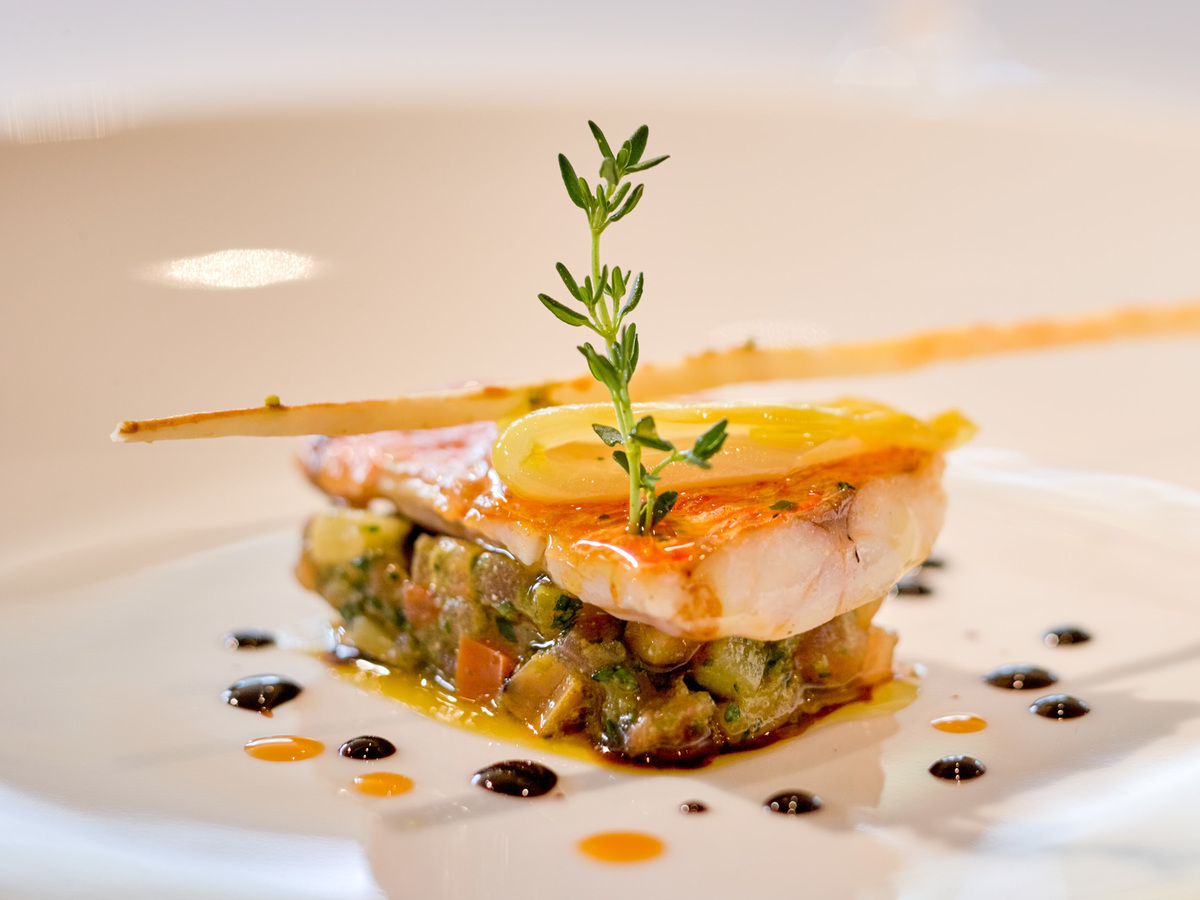 The precision blobs and artful smears look exquisite on Pinterest and Instagram, but they certainly don't allow you to satisfyingly dunk your crust of bread in them.

The rage inspired by dots on plates requires us to warn readers of some rather salty language used in this story.

Dots of sauce. Scribbles of jus. Globs of honey. Plops of purée. Squiggles of sriracha. Should we go on? Schmears of chocolate. Squirts of squid ink. Trickles of coulis. You get the idea. It's Pollock on a plate. Plating at its finest — and most formulaic.

"If I get one more plate put in front of me with six dots of sauce on it, I will go mad," declared veteran British cookbook writer Delia Smith after recently being honored by the queen at Buckingham Palace for her services to cookery.

The spirited 76-year-old culinary legend known for speaking her mind, made headlines for criticizing the modern culinary scene for becoming "very poncey, very chefy." She complained that the joy of going out to a really special restaurant has gone because, "It is very hard to find one that isn't trying to be theatre on a plate."

Smith has a point. Chefs the world over seem to love serving their patrons tiny portions on pristine white plates garnished with a geometry of dainty but insubstantial drops of sauce. Little wonder that these drops have become the embodiment of what many customers resent as an increasing fussiness and pretension suffusing the world of food. The precision blobs and artful smears look exquisite on Pinterest and Instagram, but they certainly don't allow you to satisfyingly dunk your crust of bread in them.

They famously inspired the deliciously parodic Instagram account by "Chef Jacques La Merde" (in English, that's "Chef Jack S***"), who plated up junk food like spam, hotdogs and Cheetos in the elaborate, tweezered style of posh restaurants. The wag turned out to be Toronto chef Christine Flynn who explained why she set up the account. Increasingly at restaurants, she said, "Each dish arrives, more intricate than the last. So much talent on those plates, so much thought, just not a lot of food."

Dots of sauce have long been a peeve of Jeremiah Tower, the influential chef who, along with Alice Waters, co-founded the trend of California cuisine. As an exasperated Tower told Bon Appetit Magazine, "When I see little dots on a plate, am I supposed to stick my fork in each sauce? Am I supposed to drag my finger across the plate and lick it off? A spoonful of sauce slid on the plate looks like the cat's ass has been used to drag the purée across."

Several other chefs have voiced their resistance to dots in favor of less artificial styles of plating. "I like a natural way of plating," says chef Doug Paine from Vermont. "I don't like zigzags. I don't like dots." Graham Elliot, judge of MasterChef Canada, prefers a plate which is "just an organic, beautiful looking thing that isn't like, five dots on the plate with a few pieces of herbs on top." And when Serious Eats asked its readers what trend in plating irked them, dots featured prominently. Too much artistry on a plate can be off-putting. As Julia Child remarked, "It's so beautifully arranged on the plate — you know someone's fingers have been all over it."

While Smith's comments got her some snark from other food writers — "Smith's sweeping dismissal of ornately designed dishes with 'six dots of sauce on' encapsulates a small-minded English fear of modernity and fuss, of risk-taking and creativity, of outrageous pleasure," wrote Tony Naylor in the Guardian — she got some warm support on Twitter.

"If I get one more plate put in front of me with six dots of sauce on it, I will go mad."
Gawd bless 'er. Food shouldn't be art on a plate, and it should be *on* a plate. Not a dog bowl, or a slate, or a paddle, or in a shoe. https://t.co/9LJrbuszdT

One more mention of 'pan fried' (what else do you use to fry?) and 'jus' instead of gravy or sauce. Maybe #deliasmith is onto something https://t.co/Fx0uRgO46O

What is ironic, though, is that while dots have become a symbol of pretension, they are in fact the most pedestrian way to add visual oomph to a plate. All thanks to the presence of that cheap kitchen tool called the squeeze bottle, which Anthony Bourdain eulogized as an "indispensable object in most chefs' shtick." Using it to make dots and squiggles is the easiest trick in the world, he writes in his best-seller Kitchen Confidential: "It should take you about half an hour of d****** around with a couple of squeeze bottles and a toothpick to grab the concept fully."

But whom should one blame for the outbreak of dots? Who let the dots out? Should one blame the Michelin Guide for its maniacal emphasis on elaborate plating? Or should we lay it at the persnickety door of the great Joel Robuchon? Named chef of the century by Gault Millau in 1989, the three-star Michelin chef is a notorious perfectionist known for his partiality to precision pinprick-sized dots.

Eric Ripert, who spent three years working for Robuchon at his Parisian restaurant, Jamin, discovered this at great cost. In his memoir 32 Yolks, Ripert, himself a three-star Michelin chef and owner of Le Bernardin in New York, recalls the torture of having to drop two dozen perfectly formed dots of red coral juice on a plate of oysters and scallop — not from a squeeze bottle but off the tip of a spoon. All this in a hot noisy kitchen with Robuchon breathing down his neck. Making the delicate sauces was hard enough, writes Ripert, but using them make round dots in a hot kitchen was "a fresh slice of hell."

Years later, Ripert was still haunted by those dots. "If you were to take out a pen and a piece of paper right now and try to make a circle of ninety perfect, evenly spaced dots — even if you are a good artist, even if you take your time — I could look at the paper and tell you where Robuchon would find fault," he writes. "Imagine trying to do those dots with a sauce made of mayonnaise and tomato compote. The sauce is cold and thick when you start, but if you work too long, it warms up and thins. Sometimes, as I spent hours painting red dots around a plate, I couldn't tell if Robuchon was a genius or a madman. The answer, of course, was both."

Once the squeeze bottle came on the scene and the tip-of-the-spoon was banished, lesser mortals were able to copy Robuchon's plating style. Love them or loathe them, there's no escaping the pox of dots at restaurants. Ironically, while the hottest trend in food today is hyper-local, as far as plating goes, a standard international aesthetic has taken hold. Plating has become a copycat game with little originality involved. Even if Delia Smith were to travel to Manhattan, Delhi, Manila, Moscow or Shanghai, chances are she would be presented with six or more dots of sauce on a plate.